Like a laidback student that finally puts in some hard work for the final exam but just can’t achieve top marks, the 2020 Toyota Prius Prime is a huge improvement over the previous Plug-In version of Toyota’s popular Prius hybrid, but still a step behind a full-swing PHEV effort.

In some ways, you have to admire Toyota’s insistence that every Prius version be priced as close to mainstream vehicles in its class as possible, and the Prius Prime’s mid-$30k starting price is certainly competitive, especially when you consider the government rebates and perks provided by the Prime version that aren’t available on the regular Prius that starts at roughly $5,000 less.

But after driving it a week in both winter-like as well as early spring conditions, its enhanced yet still minimal electric-only range, odd cost-cutting choices and fuel efficiency that’s better but not heads and shoulders better than the regular Prius suggests that it relies very heavily on price in its market battle with other plug-in vehicles.

Perhaps the Prime’s chief market rival is the regular Prius itself, the Prime offering a much quieter low-speed driving feel, similar cargo room, and minimal extra costs (after $2,500 federal rebate and fuel savings), in a package especially useful for Prius intenders with a 20-ish kilometre commute and regular charging access.

Picking up the Prius on a snowy wet day, with big flakes that quickly melted upon landing, the first note I had about this top-range Prius Prime Upgrade was that it really needs a rear wiper. The steeply raked rear hatchback glass catches those big snowflakes easily, especially at red lights, leaving the driver very glad that there’s a clear portion of that hatch above the rear bumper that’s see through and less susceptible to falling snow or rain.

That ability to see through the rear “trunk” of the Prius Prime plus the optional Blind Spot detection system that came in the Technology package on this car provided some confidence when changing lanes on the highway in these conditions until the rear defroster kicked in, though even regular rain later that week had me wishing for an old-school rear wiper.

Sure, those rear wipers may not be ideal for smooth aerodynamics, which likely was a priority for the teardrop-shaped and most fuel-sipping Prius available (if you plug it in regularly). But then again, a rear wiper is standard on other 2020 Prius versions, so it’s not like Toyota folks didn’t see the need for one, or couldn’t find a way to make them work aerodynamically. It’s likely that the unique rear glass that curves inward in a shape reflected by the Prime’s curving rear hatch line wouldn’t work well with a rear wiper. 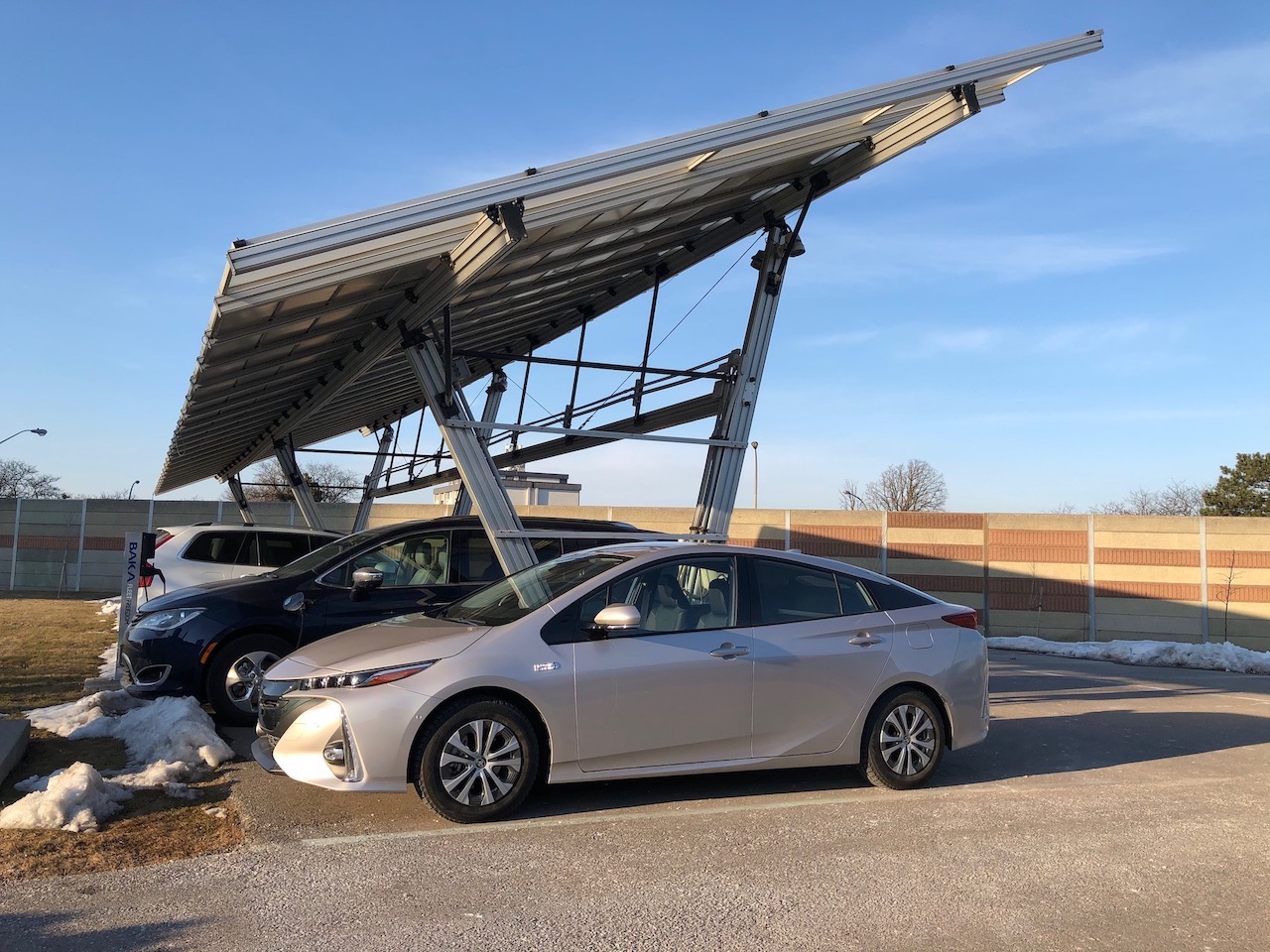 Some may argue that the rear end does look cleaner visually without it, but that’s only a small part of why the Prius Prime looks more visually aggressive than the regular Prius that can’t be plugged into a normal 110-volt outlet, or a faster 240-volt charging station (EVSE, officially). There’s a unique black nose on the Prime, no matter the colour you choose, plus four quad LED headlamps and much more prominent lower foglight setups.

The rear is even more unique, with the aforementioned curved rear glass that flows into a vehicle-wide rear LED taillight treatment, as well as much more prominent vertical reverse and foglights. The overall look is perhaps not to everyone’s taste, but if looking more aggressive than the standard Prius was the goal, then mission accomplished.

Of course, looking more visually assertive than a standard Prius does not quite lift it to Tiger King-level aggression.

New fifth seat and Apple CarPlay for 2020, but still some flimsy bits

Even before hopping in, there are signs from this brand-new Prius Prime tester of some cost-cutting. From the charge port at the rear passenger side of the car that feels flimsy and loose, to the flimsy closing sound of the doors, there’s a slight perception of non-solidity in this car. There’s just more structural rigidity and refinement in a regular Camry or Honda Accord than in this car, and both those mainstream sedans offer hybrid versions as well.

Moving inside, the Prius Prime doesn’t have any gauges directly in front of the driver, but comes with a wide central binnacle that houses all the usual vehicle information, as well as fuel efficiency and range displays. But the centrepiece of the interior is its large vertical infotainment screen, a massive 11.6-inch HD one in the top-line cars such as this one that looks very much like the vertical one in new Volvo models, with a seven-inch one as standard.

The white dash accents previously available have now become a more mature black. Though it’s thankfully not the cheap hard plastic desert of the pricier Chevy Bolt EV, the overall interior chic is not nearly as nice as some other similarly priced mainstream vehicles – though that large infotainment screen does certainly help here. 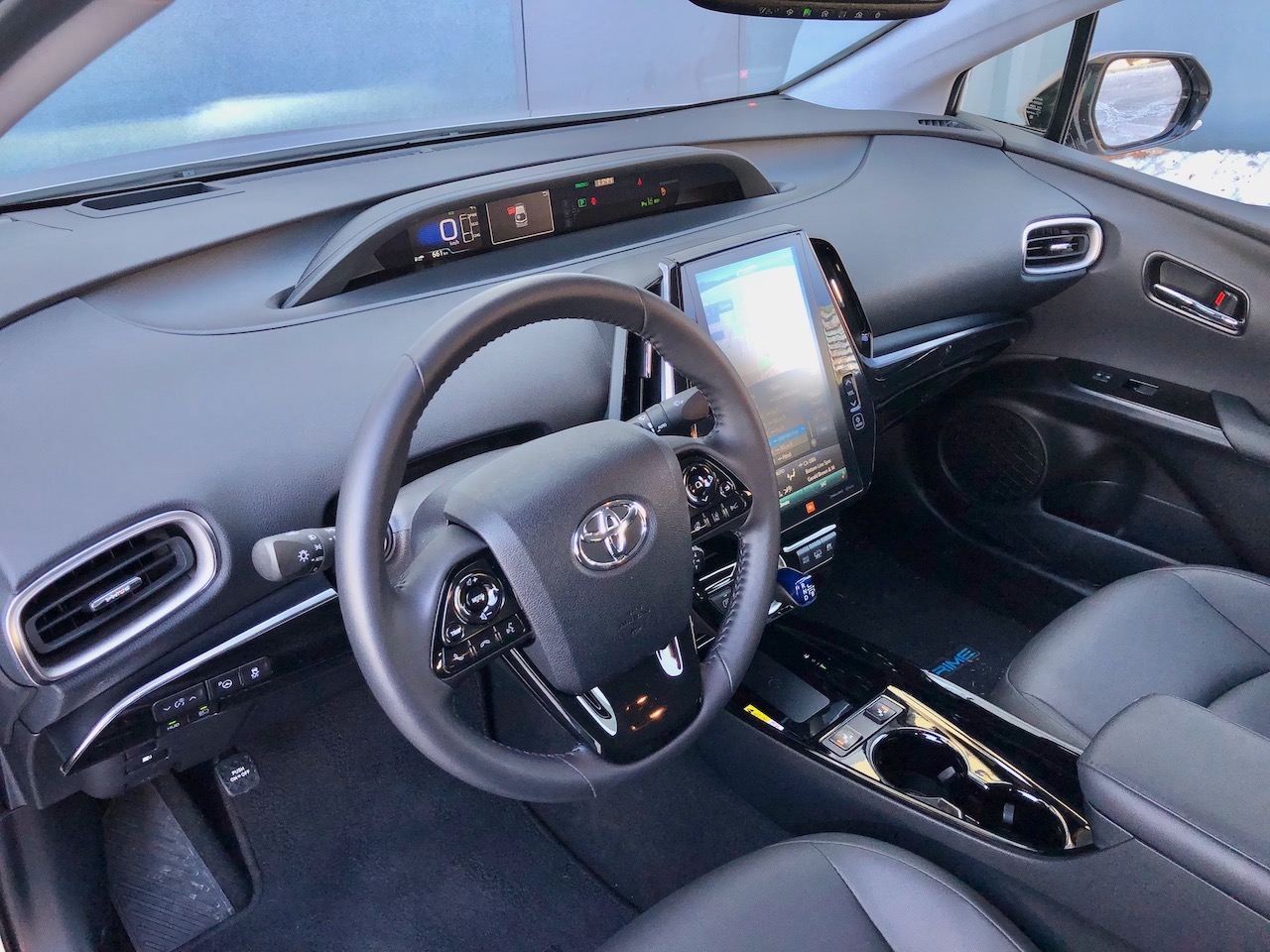 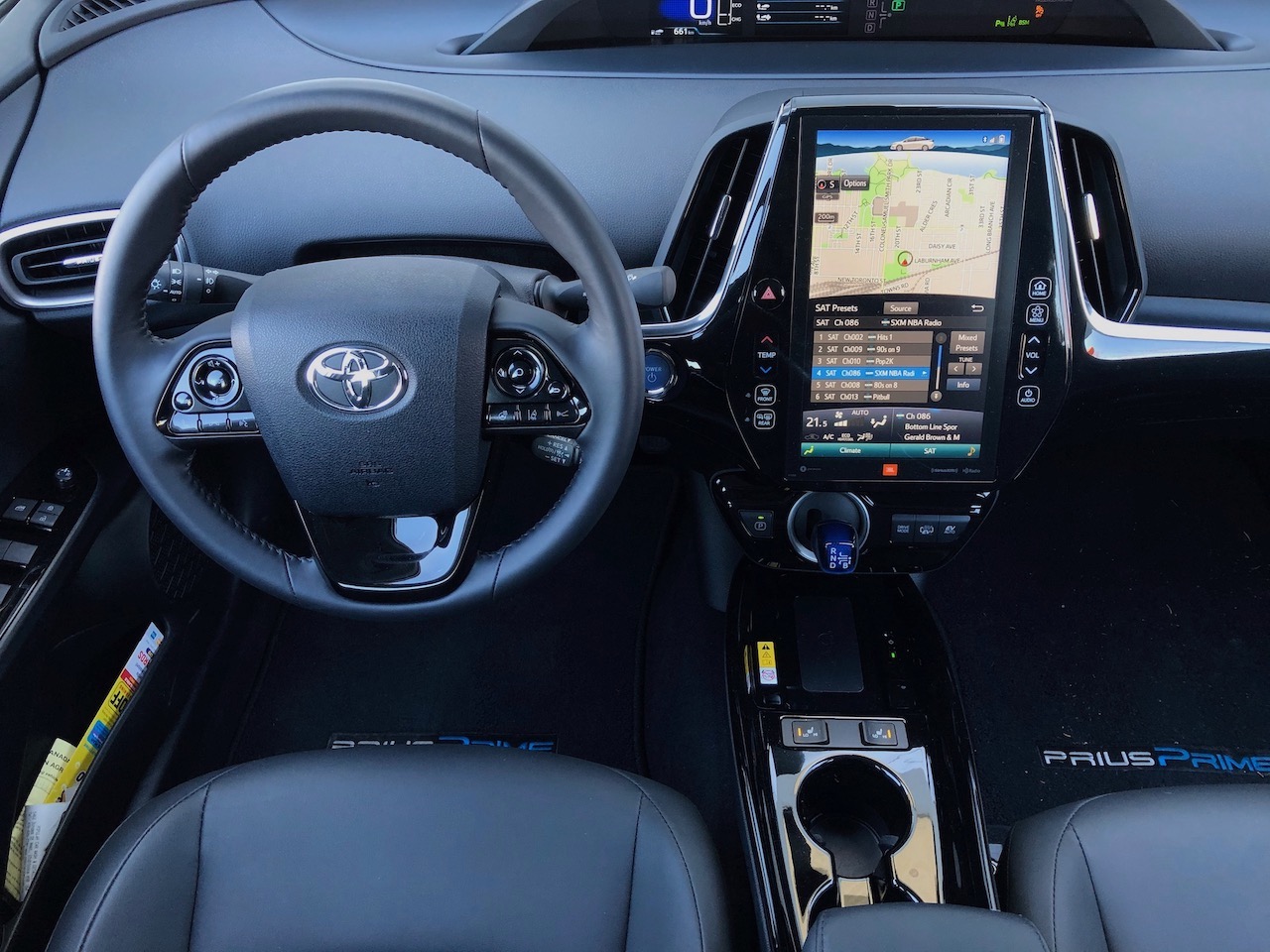 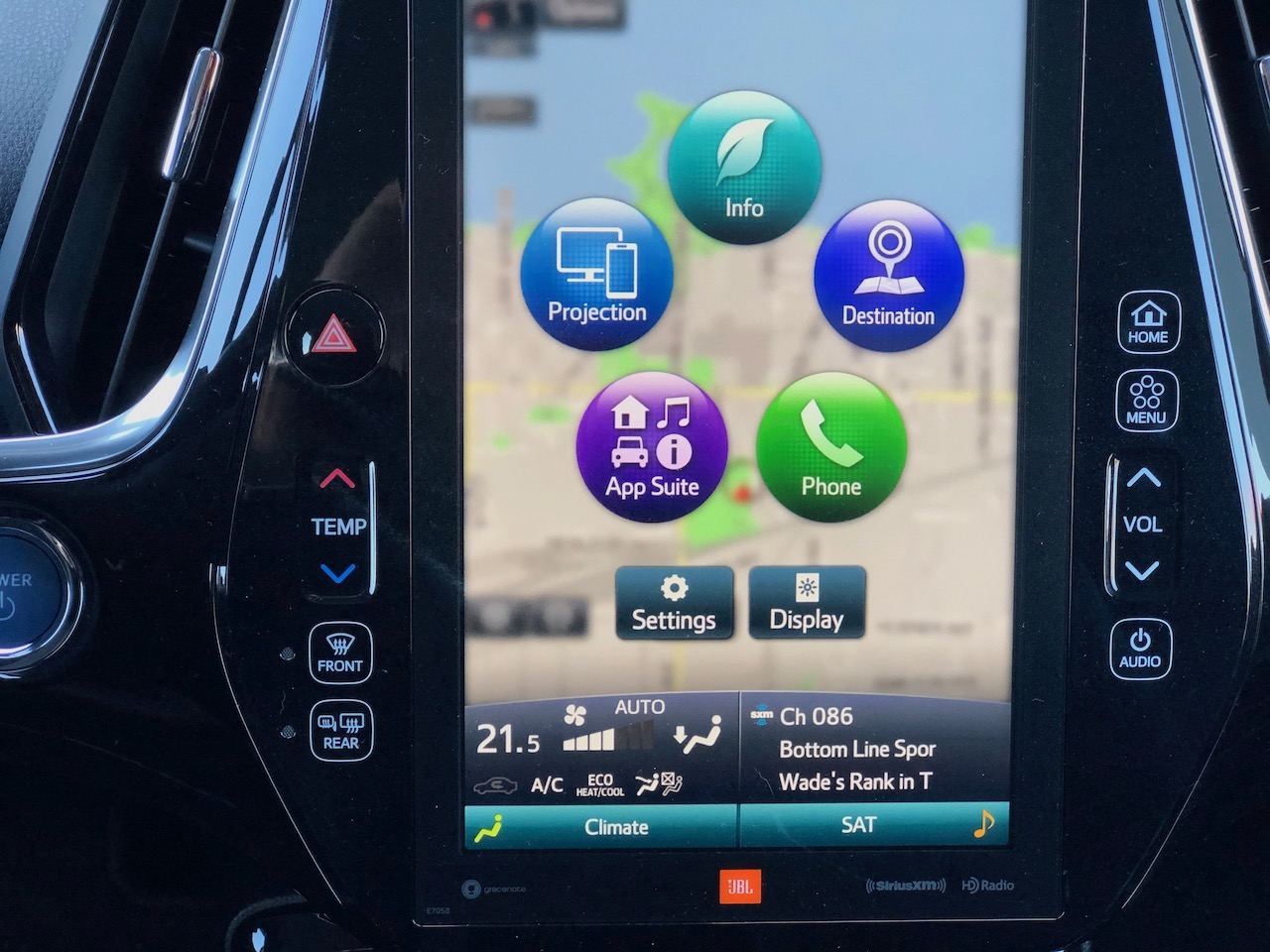 Feature-wise, there is lots to like inside. All Prius Prime buyers receive heated front seats and steering wheel, automatic climate controls, twin USBs for rear seat passengers, and an auto-sensing driver’s door-locking system. Moving up to the Upgrade version adds the aforementioned huge vertical screen with navigation, a power driver’s seat, and wireless device charging.

Tick the $3,000 Technology package box, as ours had, to add a head-up display, radar parking assistance, rain sensing wipers, a 10-speaker JBL audio system, and Toyota’s Intelligent Parking Assist system (which worked for me once in six tries, unfortunately), plus blind spot monitoring with cross traffic alert.

But easily the most annoying aspect of the Prius interior is that the owner can’t turn off the constant beeping that starts as soon as you put it into Reverse. Though irritating on its own that the Prius Prime is one of the few vehicles on the market that sounds like a dump truck inside when reversing, this feature often combines with the rear parking sensors to provide a cacophony of warnings inside that will have you diving for the owner’s manual, looking for an “off” setting half way down the driveway.

Sadly, you won’t find one. There’s a way you can lessen the noise to a single beep, but you have to take it in to a dealer, or use an OBD-II device to change it, on the premise that it’s a safety feature, since one can’t tell it’s in reverse by looking at the position of the centre-stack-mounted shifter.

Performance great at the pumps, less so on the road

It’s clear that the majority of the Prime’s engineering dollars were spent on its fuel-sipping powertrain, which uses the same 1.8-litre gas-electric hybrid four-cylinder engine as in the regular Prius, then adds a larger 8.8 kWh lithium-ion battery, providing the Prius Prime up to 40 km of all-electric range in ideal conditions. Those “up to” and “ideal conditions” caveats are key, as my early spring test with roughly +5-degree temperatures most of the week garnered estimates of roughly 34km with the climate controls set at 21.5.

It’s more difficult to gauge exactly what the Prime’s real-world all-electric range is because the engine comes on so often and easily with increased accelerator or climate control requests, even with plenty of charge left in the battery pack. Even when the temperature brightened up nicely to +10, the most range I saw with careful driving and no climate control use was 28 km. Winter tires and lots of defrosting on the rainy days likely didn’t help this range, but these are fairly common spring and fall temperatures. 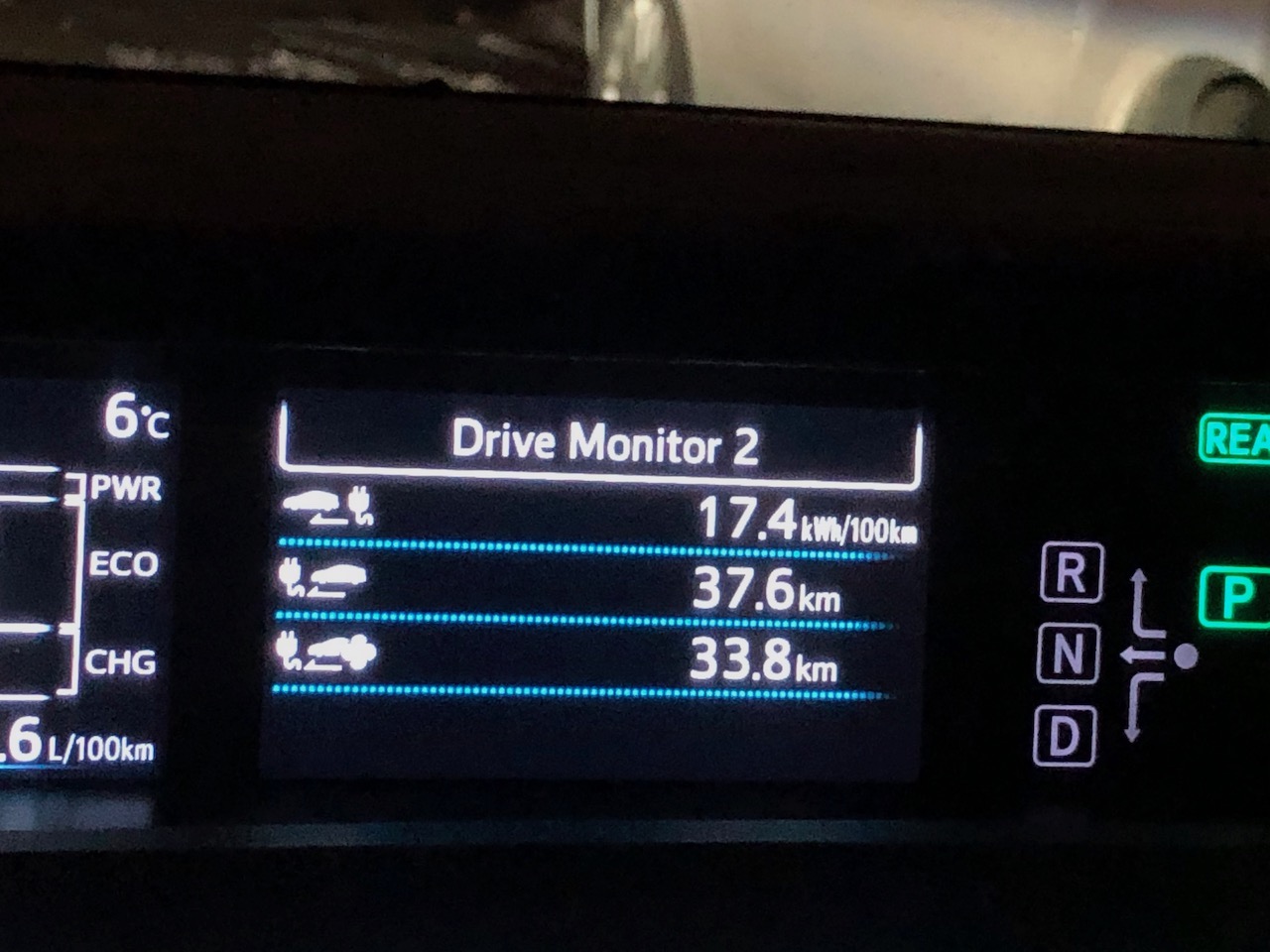 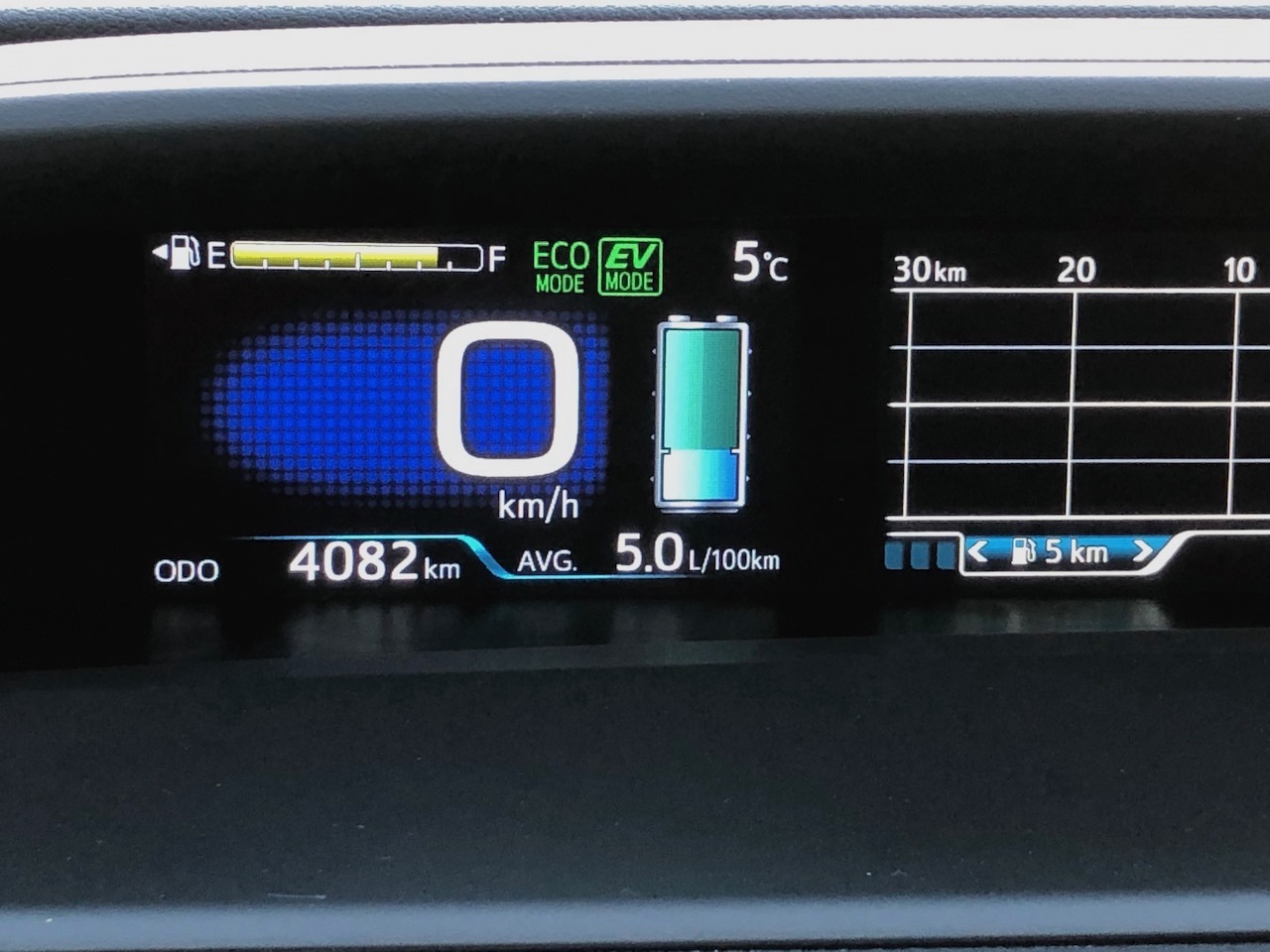 The more you can plug-in and avoid the loud internal combustion engine coming on, the less the fueling costs, and the quieter and more pleasant the overall driving experience. Efficiency-wise, it varied between 1.6 and 6.0 L/100 km, but averaged 5.0 overall by the end of the week, with an official rating of 4.3 L/100 km overall.

That performance at the pumps was much more impressive than its on-road performance, given its total of 121 hp of combined electric and gas power – one horse more than the regular Prius. It doesn’t feel painfully slow, but its published 0-100 km time of 10.5 seconds confirms that its 1,530 kg curb weight (3,373 lb) is occasionally challenged by its power numbers that are less than a subcompact Honda Fit, and certainly trailing most of its class.

In Ontario, the green plate that also comes with it provides access to some HOV lanes in the province that could help reduce commute times. Although that seems like a much lesser advantage now than it did three weeks ago, before the days of COVID-19 and social distancing measures.

Value-wise, the Prius Prime stacks up better against the regular Prius than against rivals like the Hyundai Ioniq Plus and rare Kia Niro PHEV, especially if you’re in Quebec and can collect the federal government’s $2,500 rebate as well as Quebec’s $4,000 one, or BC’s additional $1,500 one. But it’s also significantly less than the Honda Clarity PHEV (starts at $40,990) and the all-electric Chevrolet Bolt ($44,998), though you could argue the discontinued and much-missed Chevrolet Volt plug-in hybrid would have been the closer rival.

Against the regular Prius, it’s true that you give up some cargo space (down 136 litres), but the Prime’s cargo hold is still spacious and flat, just notably higher to accommodate the larger lithium-ion battery. 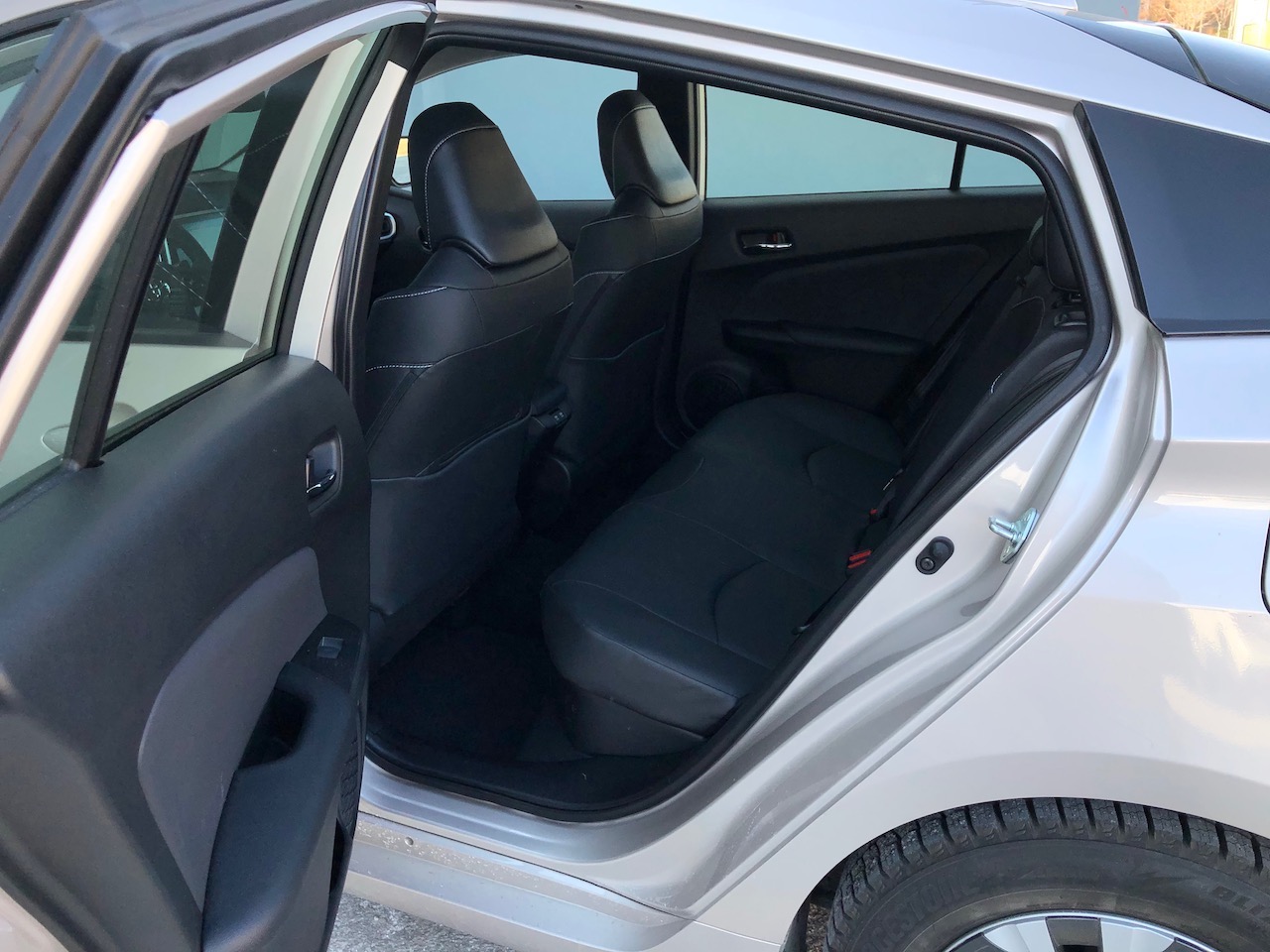 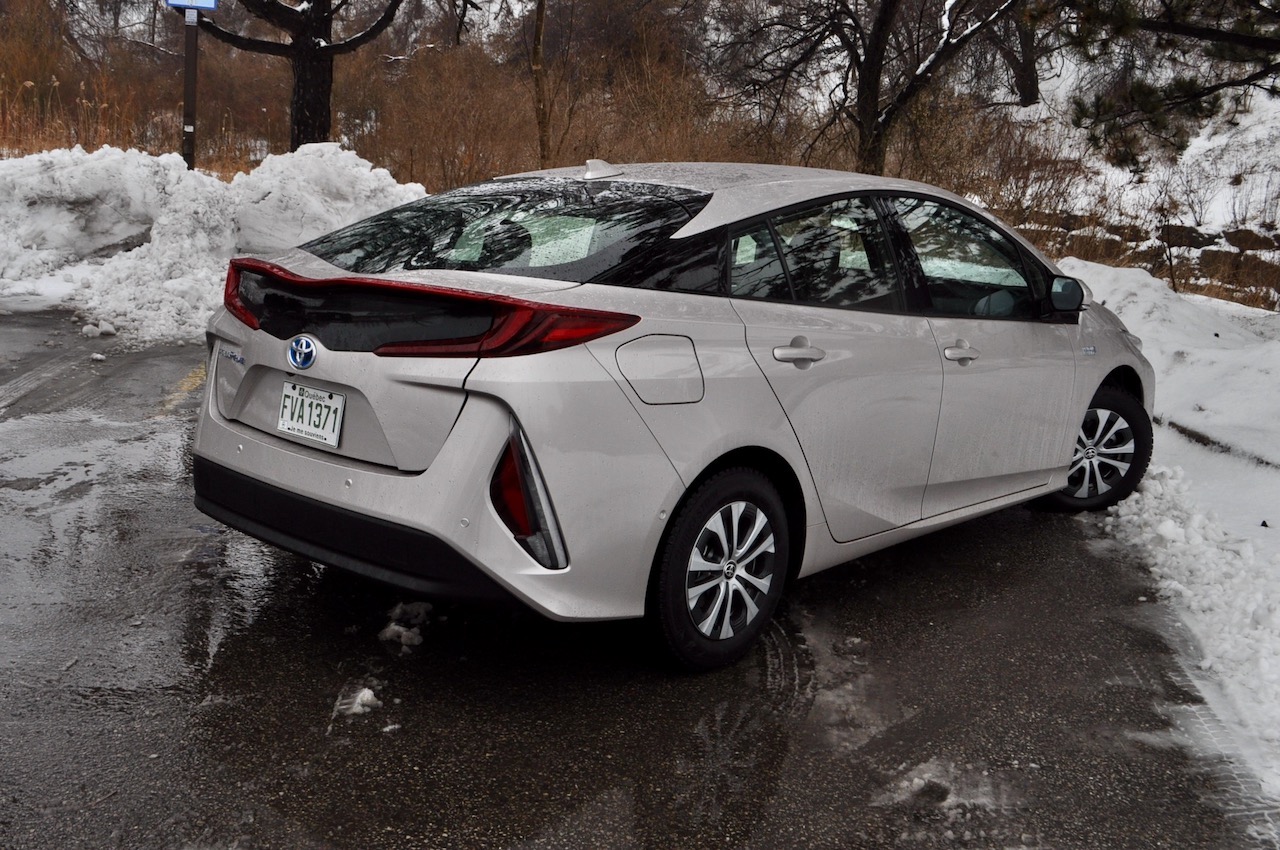 The Prius in general has a great reliability and safety record, with the Prime sharing its Top Pick IIHS and NHTSA 5-Star crash ratings. Toyota has done a great job of offering many active safety features at one of the lowest plug-in prices in the business, with full-speed dynamic cruise control, an active emergency braking system with pedestrian detection and even lane departure warning with steering assist.

So overall, while there are quicker and more refined plug-in options out there, the 2020 Prius Prime offers an interesting alternative for folks that have relatively short commutes, and want to dip their toes into the world of plug-in electric vehicles.