Back in March 2017, I drove the Volvo S60 and V60 Polestars on road and track in Arizona, and I remember thinking at the time that we should enjoy these cars while they exist because with a new S60 on the horizon, these Polestars’ days are likely numbered.

And I was right. A few months later Volvo confirmed that Polestar – a fellow Swedish company that specializes in high-performance and racing that Volvo has worked with since 1996 and owned outright since 2015 – would transition to become a pure electric performance division under its own badge with a separate mandate from Volvo Cars and Geely, the Chinese parent company that owns both.

I was in Shanghai in October 2017 to witness the unveiling of the first new Polestar, known then as the Polestar 1 concept, and I was struck by how little this plug-in had in common with the old Polestar rip-snorters I drove on track a few months earlier.

I relate this story because after spending some time recently behind the wheel of a 2020 S60 Polestar Engineered (PE for short), I’m not sure why it exists. Intellectually, I get it – to sell more S60s! – but I’m not sure if it works. But I’ll get to that.

The current third gen mid-size Volvo S60 sedan was introduced in 2018 and went on sale late that year as a 2019. Production moved from Volvo’s European plants to the company’s new facility in Ridgeville, South Carolina. 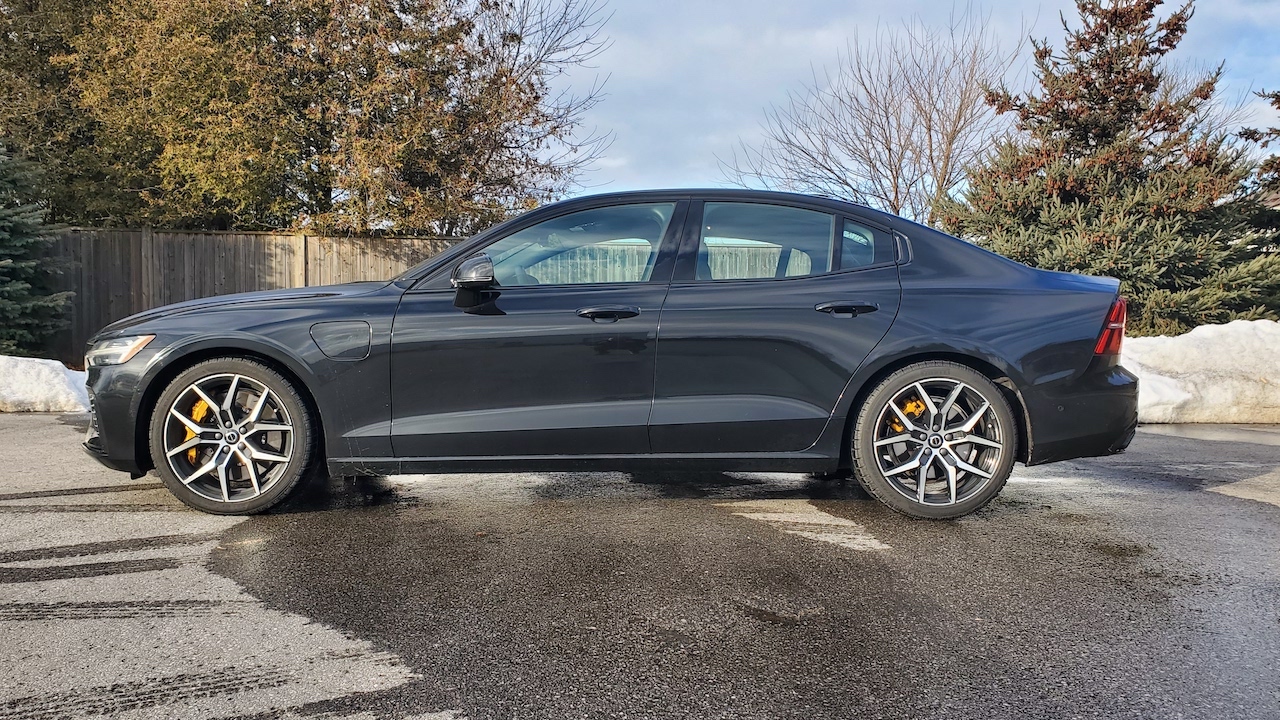 The new S60 is built on Volvo’s Scalable Product Architecture (SPA) platform that underpins all 60 and 90 series cars the company builds and, as a result, it carries rather homogenized styling – it looks like a scaled down S90. Mechanically, all S60s come equipped with a variant of Volvo’s Drive-E powertrain: a 2.0-litre turbocharged (and supercharged depending on trim) 4-cylinder engine paired with an 8-speed automatic and all-wheel drive.

What does Polestar Engineered mean?

As you might imagine, PE means maximum performance, at least as far is Volvo is concerned. As the company states on its website, the car is, “optimised for pure performance with advanced driving dynamics and zero-emissions capability.”

The performance improvements don’t stop there, however, as the car is also equipped with a unique PE chassis created in conjunction with Öhlins, a Swedish company that builds suspension systems for a variety of machinery beyond production cars, including motorcycles, mountain bikes and race cars. 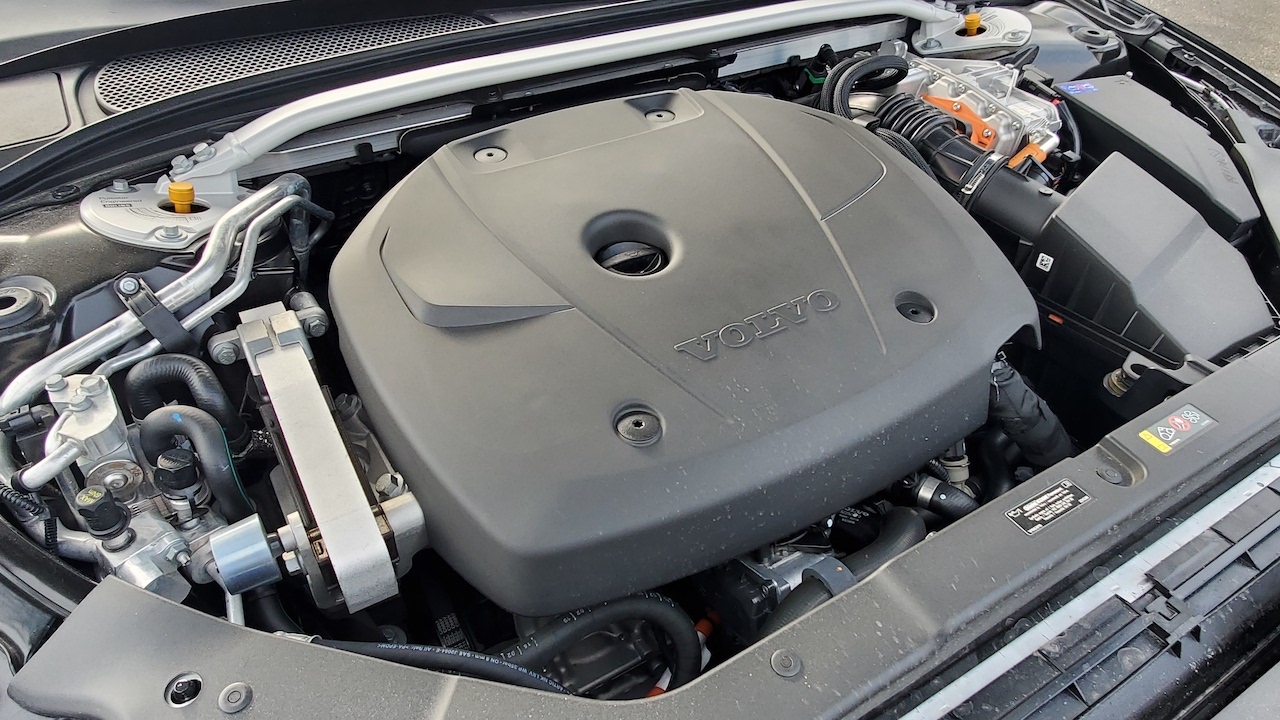 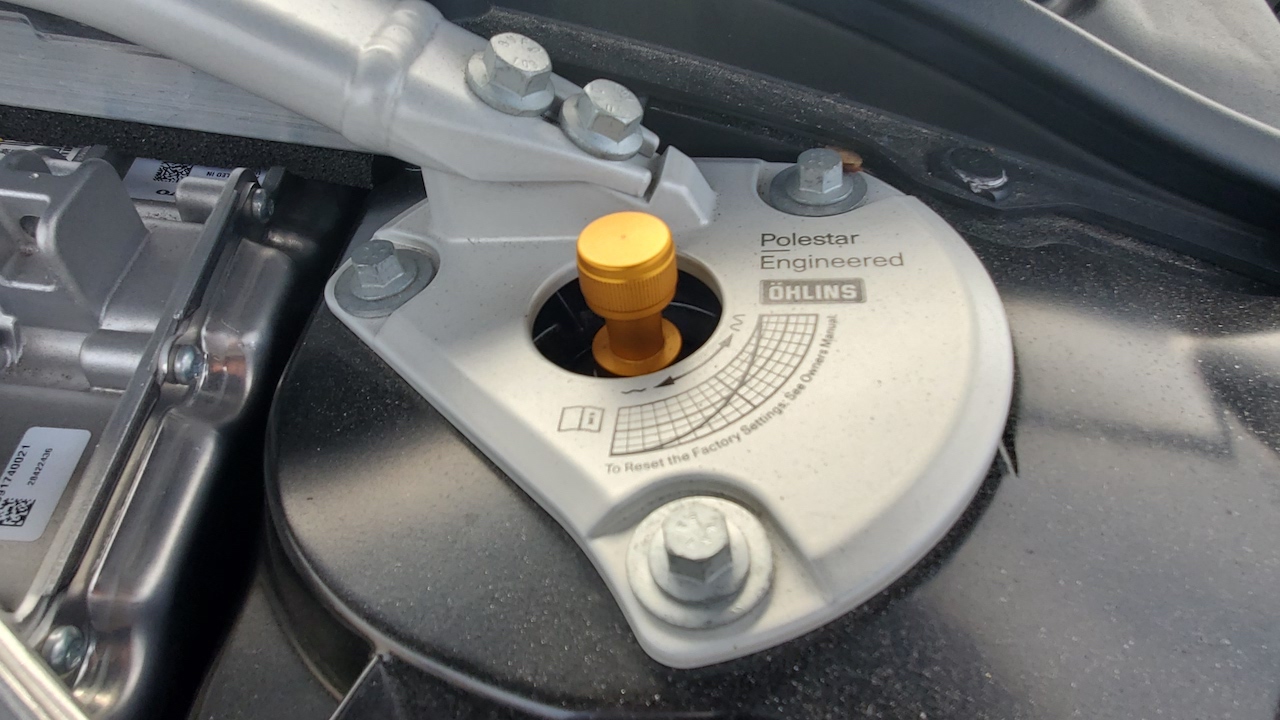 The S60 PE features stiffer springs, a lower ride height and Öhlins dampers that can be tuned through a front strut bar which has 22 settings. These can be adjusted by popping the hood and turning the gold-coloured adjustment knobs on the strut bar, giving owners the ability to tune their car’s ride as they see fit. Thankfully, Volvo provides guidance for such fiddling on its website.

Elsewhere, the S60 PE sports a set of front Brembo brakes (371 mm slotted and ventilated front discs) with calipers finished in Öhlins gold, the official accent colour of PE-branded Volvos. The grabbers are housed behind a set of shiny 19-inch black polished forged alloy wheels shod in P235/40R19 Pirelli Sottozero winter tires (summers come standard, but my test was during the winter).

Because the S60 PE is a Volvo, having max performance doesn’t mean one’s carbon footprint cannot also be reduced, therefore it is also a plug-in hybrid. Pure electric range is a modest 35 km, but if charged up daily, efficiency gains can be achieved. That wasn’t the case during my test, but I’ll get to that.

For the purpose of this review, Volvo Car Canada set me up with a S60 PE finished in Black Stone with a charcoal black interior. As one might imagine, this model is loaded with content (bending LED headlights, panoramic sunroof, nappa leather seating, navigation, Bowers & Wilkins premium audio and a lot more), but it is also equipped with two individual options: graphic head-up display ($1,150) and metallic paint ($900). Including freight ($2,015), my S60 PE tester rings up a subtotal of $84,865 before dealer fees, taxes and licensing.

As I mentioned earlier, the S60 line is built on the SPA architecture that is shared with all 60 and 90 series Volvos, which has a homogenizing effect on styling. In the case of the S60’s execution, I think the results are contemporarily handsome. The S60’s angular lines and geometric shapes aren’t particularly exciting, but they accomplish the goals of updating the car’s looks and aligning it with the rest of the Volvo family.

Inside, the S60 now looks and feels like the rest of the 60 and 90 family. From the customizable 12.3-inch digital driver display and the 9-inch Sensus Connect touchscreen display that anchors the centre stack, to the ice-cube shaped start / stop switch on the centre console and nappa leather seating, the S60 PE delivers a familiar Volvo luxury feel. 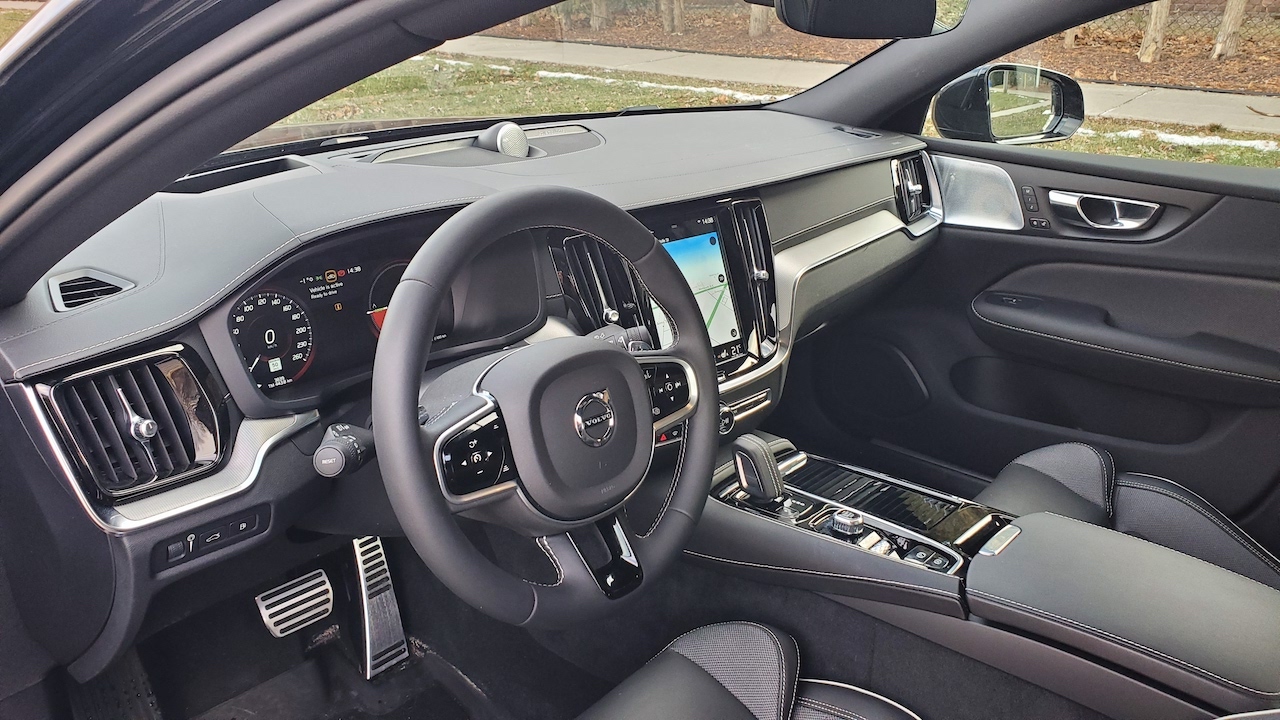 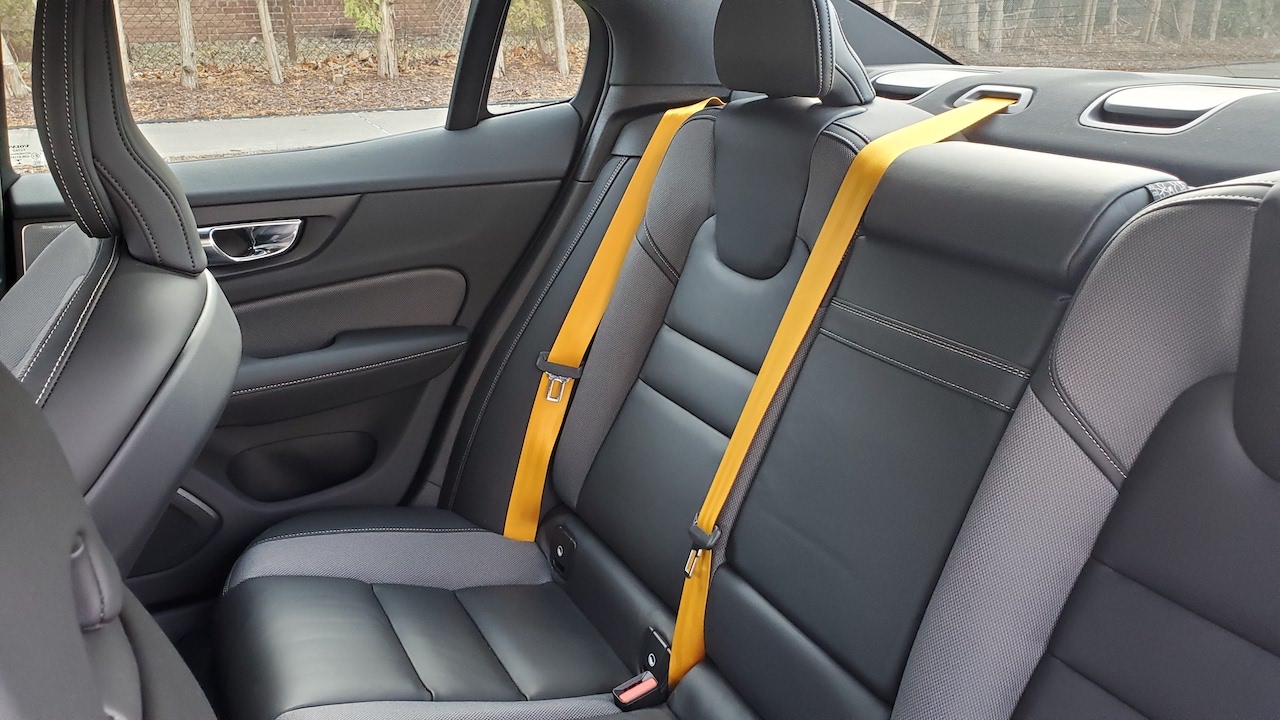 Volvo has its flag firmly planted in minimalist luxury territory, but the execution feels modern and the leathers, plastics and satin metal accents look good and are pleasing to interact with. My only serious gripe is with the climate controls, which (apart from the defrosters) are housed in a touchscreen menu. Functions as important as these should be on hard keys. Always.

One other thing worth noting is the cabin felt a bit tight on space, particularly in the back seat. Ingress and egress weren’t the smoothest for yours truly and while my head wasn’t squished, there isn’t an abundance of room. Same goes for knee and legroom. Job well done on the trunk, though (390 litres).

The S60 PE packs a lot of power into its modest packaging and you really feel it when the drive mode selector is tuned to Polestar and you stand on the accelerator. Don’t let its sedate looks fool you – this is one fast car.

Power delivery from the T8 Twin Engine (that’s Volvo-speak for its gas-hybrid powertrain combo) is very impressive off the line and at speed. The outside blurs quickly in this car, which makes slicing through commuter traffic more fun than it would be otherwise.

The supercharged and turbocharged 2.0-litre four doesn’t make a ton of racket as it goes about its business, but you feel it in the seat of your pants. There are three drive mode settings (pure, hybrid and polestar), but let’s get real, if you’re shelling out $84K-plus for a S60 PE, you’re likely going to have it tuned to Polestar most of the time. 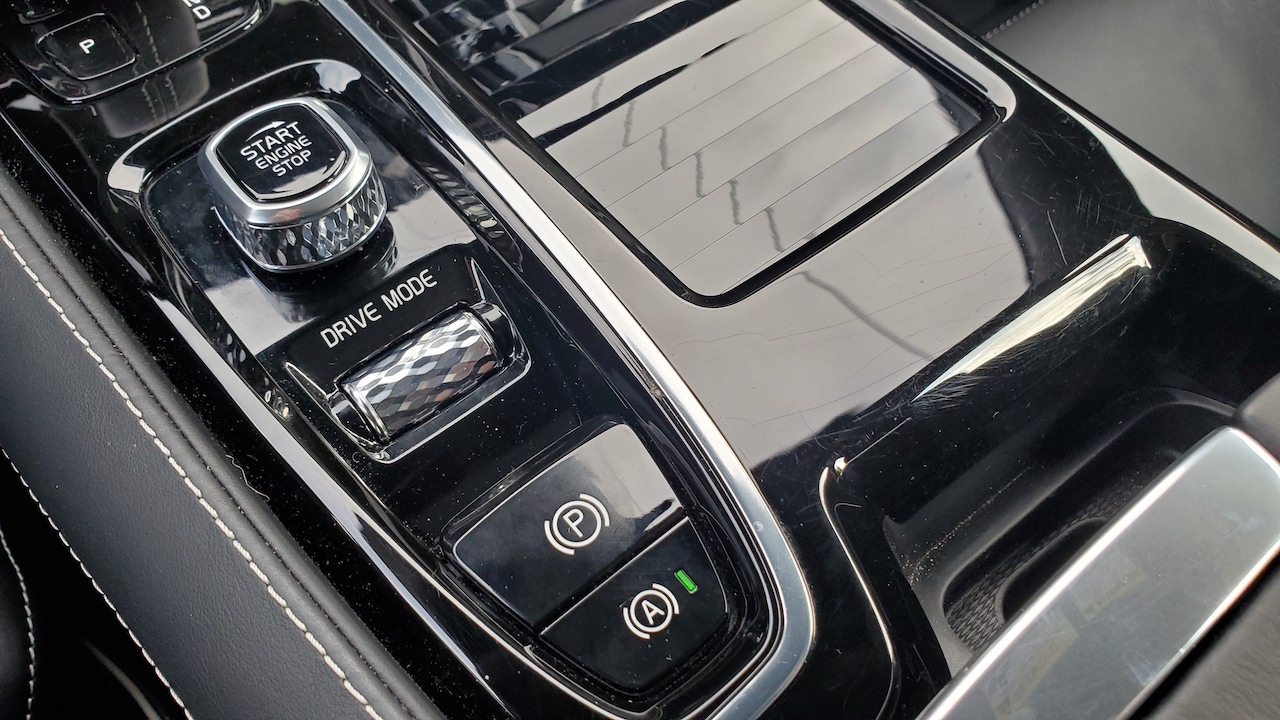 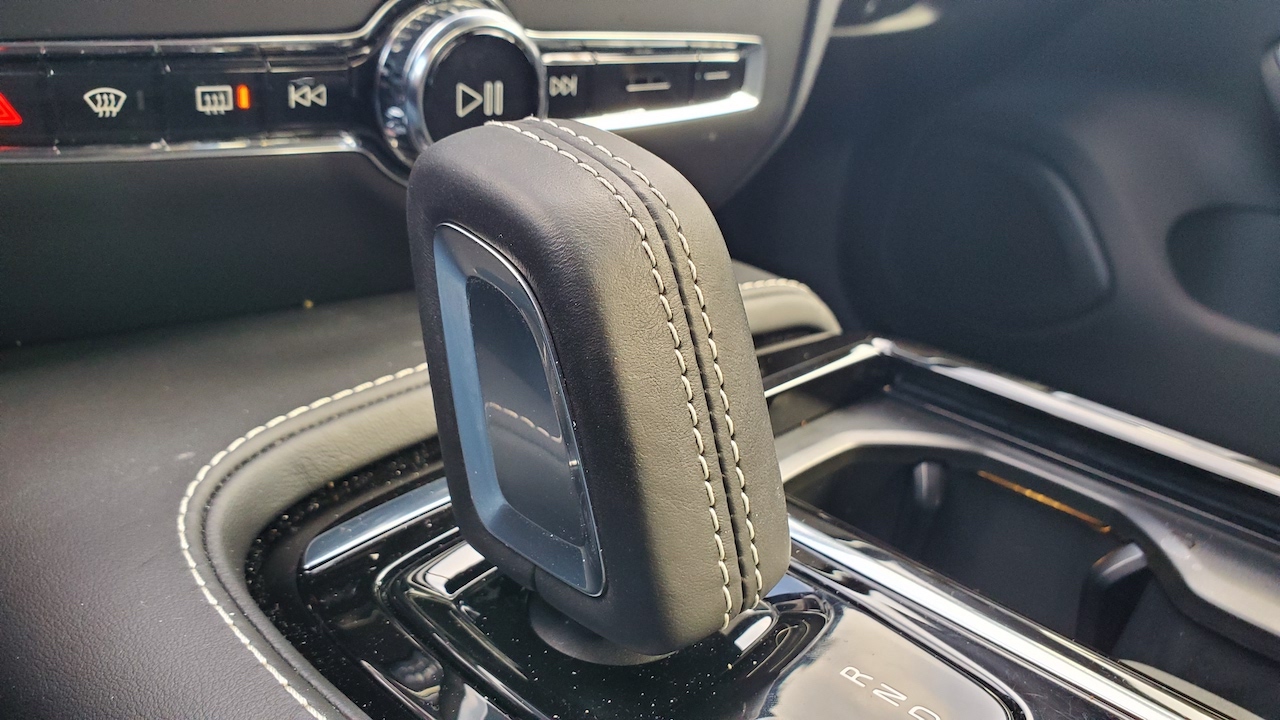 As for the DIY Öhlins shock tuning, I popped the hood and dialed the knobs a bit just to get a sense for how they work but put them back to their original settings before driving off. Reasons for that were twofold: one, it’s not my car, and two, the ride was already stiff enough and I didn’t want to disrupt my spine any further. Steering and general handling did feel light, responsive and well-balanced, however.

It’s also important to note that my test drive was on winter tires on public roads. To really get a feel for the benefits of the Öhlins / PE chassis magic dust, one really needs a good set of summer tires and a closed course.

The Volvo S60 PE is an impressive package. It comes packed with big helpings of luxury content and performance wrapped in an attractive package with a plug-in hybrid powertrain. Problem is, I don’t know who it’s for.

The hybrid powertrain adds cost and weight but delivers a tiny amount of pure electric range. I can appreciate Volvo wanting to leverage the Polestar name and this isn’t a volume seller, but as I said at the outset, Polestar is something else now. Its meaning has changed.

The S60 and V60 PEs are worlds apart from the Polestars I drove in Arizona three years ago. Those cars had an uncompromising performance character, while the new cars do not – they must also serve wider corporate agendas which may turn some buyers off. 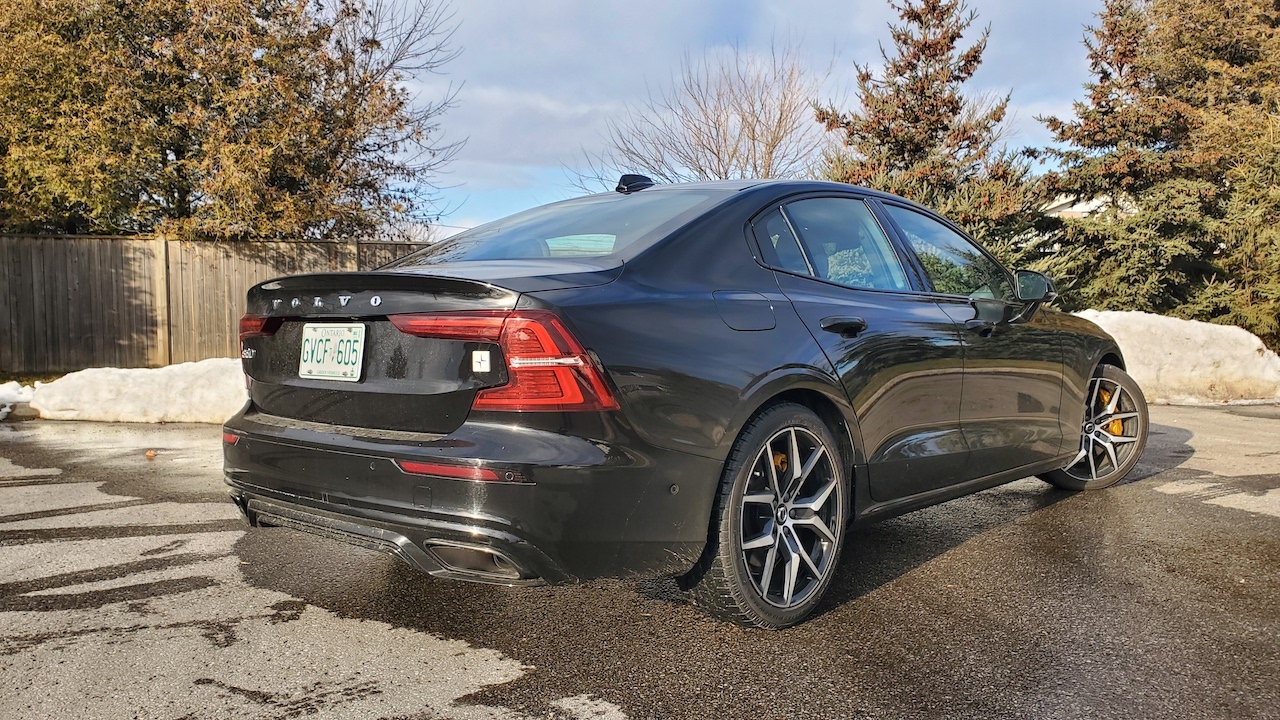 I’ll put it this way – the Polestars I drove in 2017 retailed for less than $70K and had almost as much performance. The new PEs carry MSRPs between $80 and $83K and face stiff competition from Audi, BMW, Infiniti, Mercedes-AMG and others. A Mercedes-AMG C 63 sedan, for example, has an MSRP that is almost $4,000 less than the S60 PE. That’s not good news for Volvo.

The plug-in aspect could help the S60 PE appeal to a broader audience, but it’s not a Tesla. I achieved a subpar fuel consumption average because I don’t have a set-up that works for daily charging. I concede that charging it daily makes a difference. Not driving it in Polestar mode would help too, but if efficiency is your main priority why choose this car?

And that’s the problem with trying to simultaneously serve constituencies that aren’t aligned. Both end up being shortchanged to some degree, which is unfortunate for the S60 PE, a car with many good ideas and an impressive engineering pedigree. 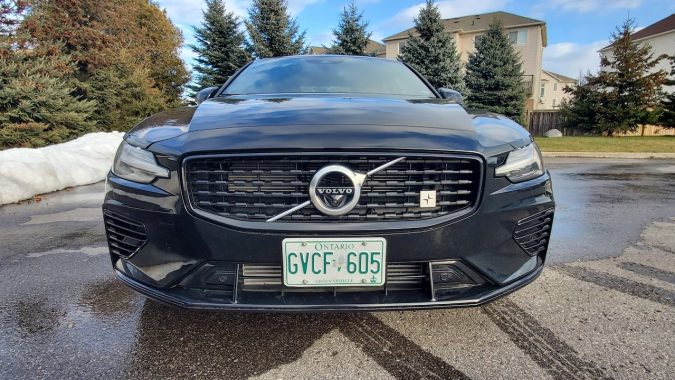 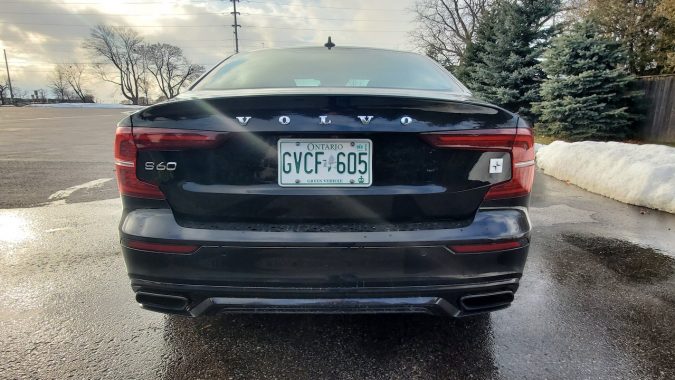 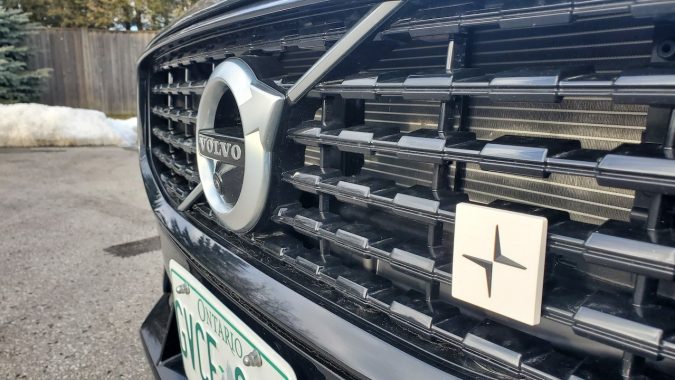 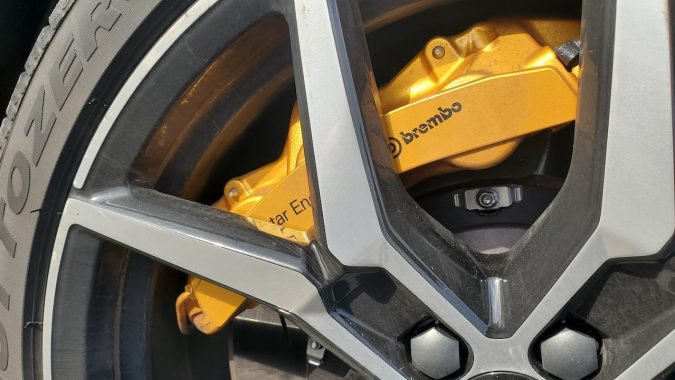 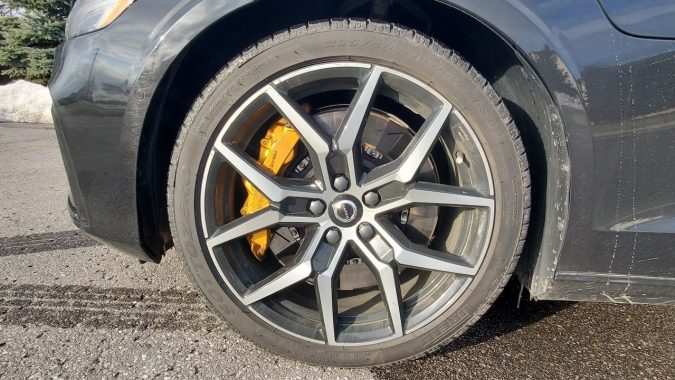 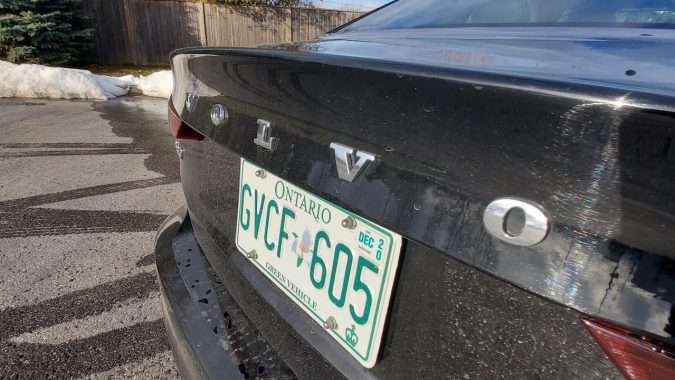 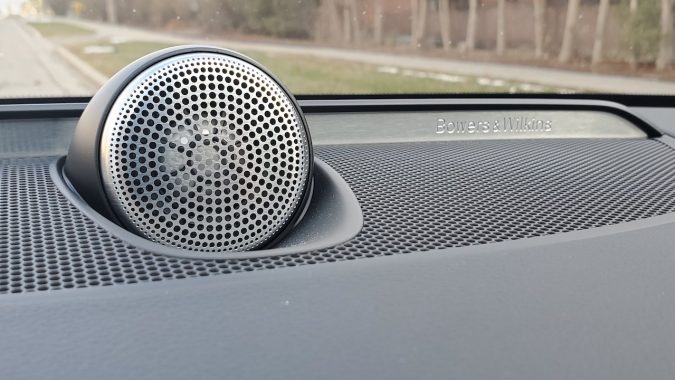 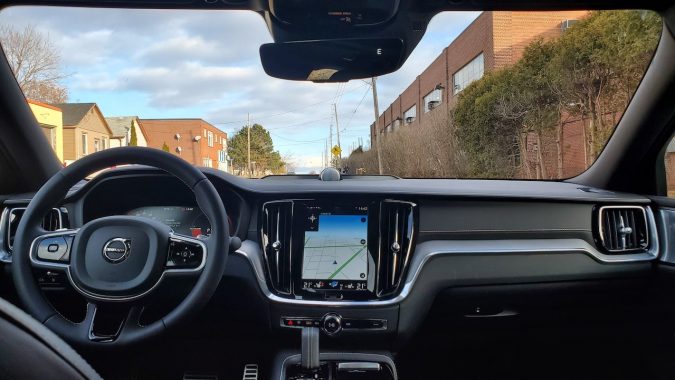 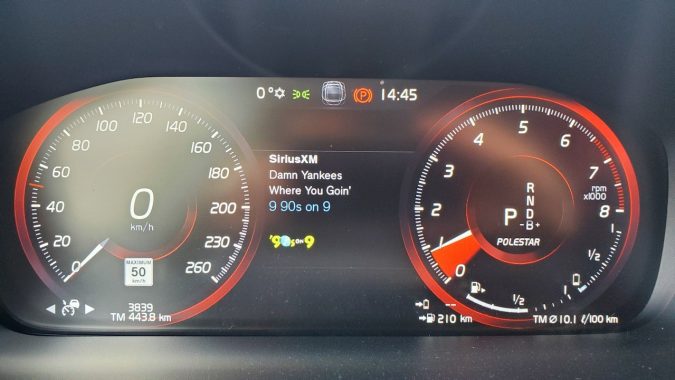 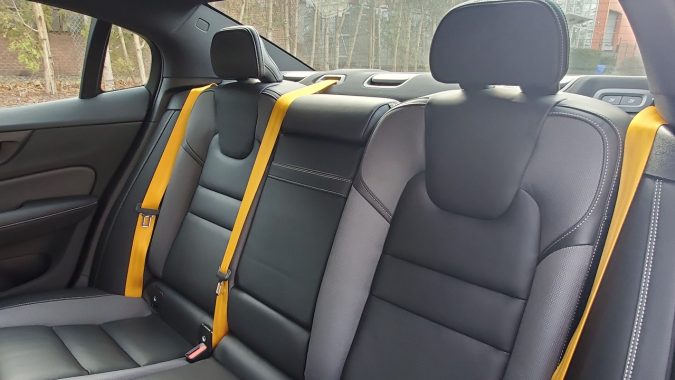 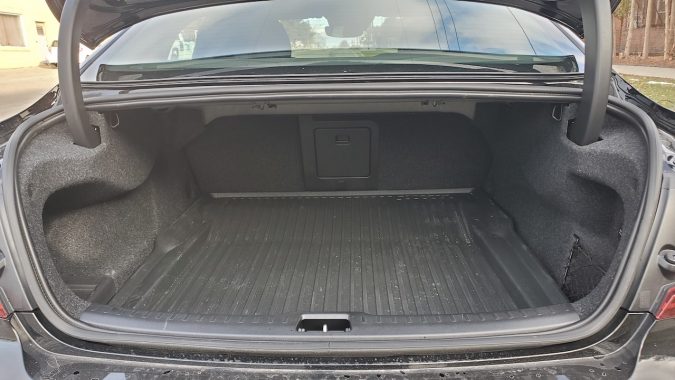