Plug-in X5 gets a bigger battery and a bigger engine.

The BMW X5 is an impressive thing. It’s obsessively well designed and capable on any terrain. It can be a family-friendly SUV, a luxury vehicle, a sports car, and an off-roader. If you only had space for one vehicle, an X5 would fit the bill nicely.

Entry-level models are equipped with a powerful and efficient turbocharged inline-6. You can also have a V-8 with over 500 hp, and if that’s not enough, there’s an M version with over 600.

The X5 xDrive 45e plug-in hybrid seen here is the newest addition to the family and builds on the last-generation X5 40e with double the battery capacity (24kWh) and two extra cylinders. The electric range has effectively doubled and you can expect to get around 45 km from a fully charged battery pack. A full charge takes a rather lengthy 6 hours when using the on-board 3.7kW charger.

Thanks to the 3-litre turbocharged inline-6 under the hood, the 45e gets a large power boost and no range anxiety. Combined with the electric motor you get 389 hp and 443 lb-ft of torque fed through a snappy 8-speed automatic, making this a genuinely quick hybrid SUV. It will even tow up to 3,266 kg with the optional trailer hitch. 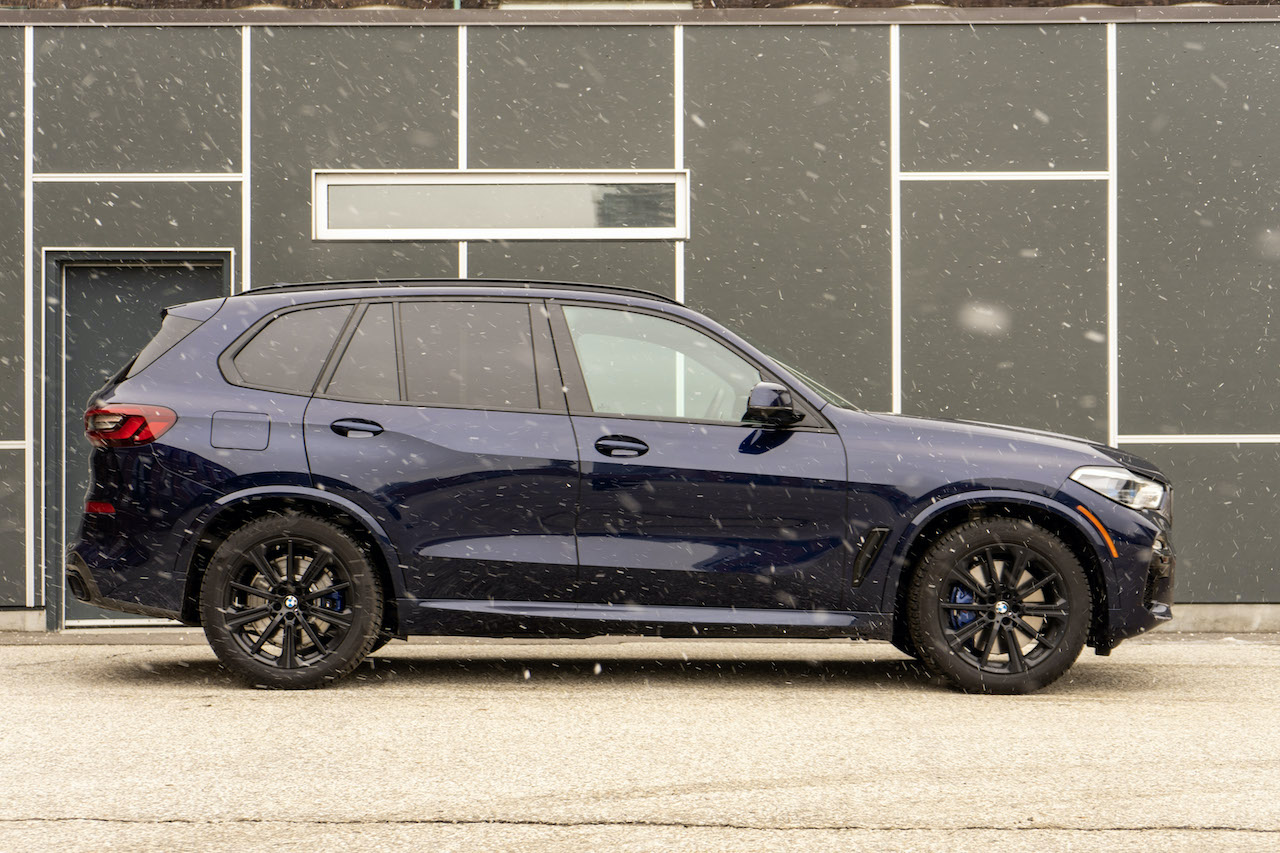 A starting price of $83,500 represents a sizeable premium over the standard 6-cylinder X5 but with the two-axle air suspension and electronic dampers included on the 45e, it more than makes up for this difference. My tester was loaded with just about every option there is including some extra snobby features like soft-close doors and a BMW Individual extended Merino leather interior that wraps just about every surface you can touch in soft leather. It also had things like heated and cooled cupholders, laser headlights, and a drive recorder.

Most every safety feature you can imagine is on board this X5, including the driving assistant that will take care of steering, braking, and acceleration when dynamic cruise control is engaged and will even compensate for speed and drive mode. 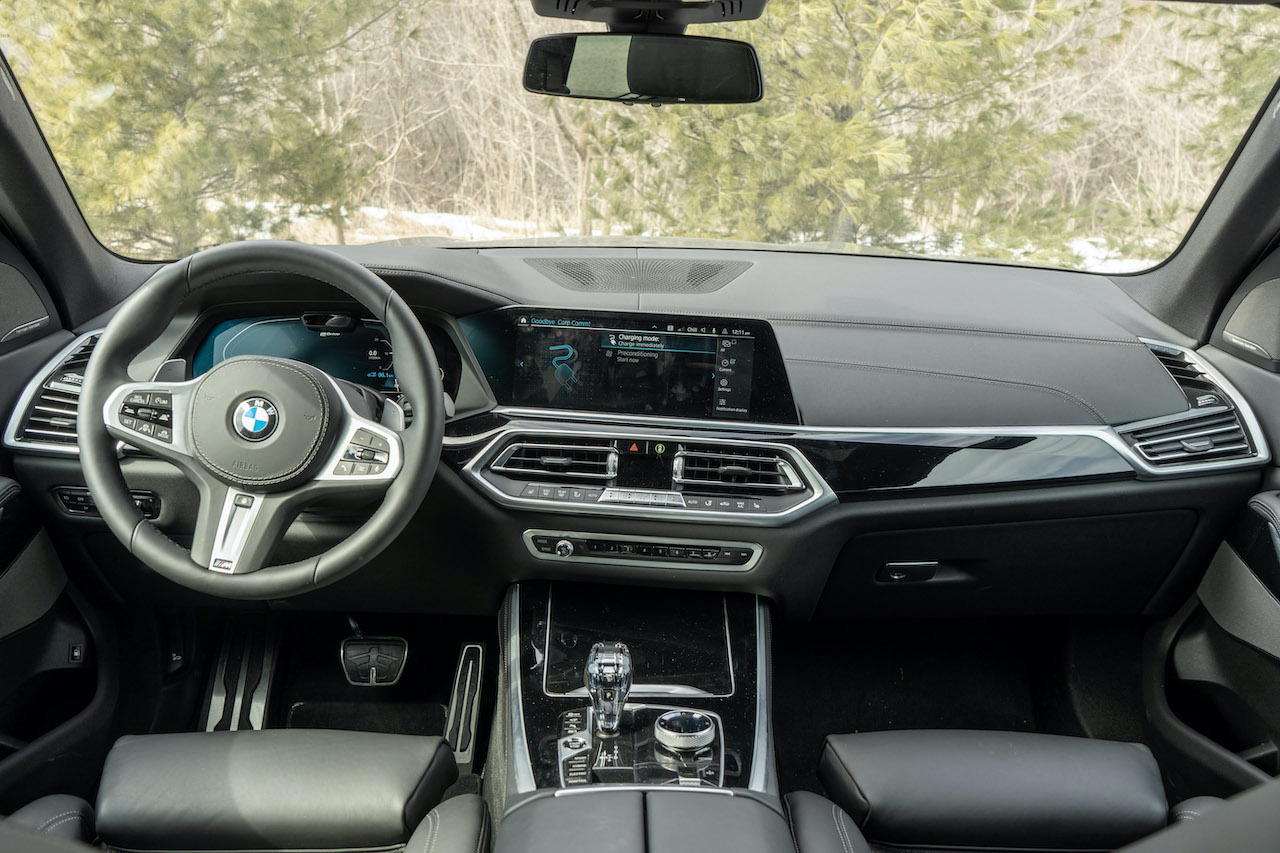 Inside there’s space for five people with good storage and the split tailgate is one of my favourite features.

Like many vehicles in this price range, I could spend an entire day writing about all the techno-wizardry stuffed in the X5. Suffice to say, from the snappy iDrive infotainment system, to the thoughtfully executed physical buttons and knobs, and the way everything just works without much thought or effort, this is one of the best examples of what a good interior should be.

When driving the 45e, you’ll notice a few differences from a standard X5. Pressing the start button is met with silence as the displays come to life. Put it in drive and set off just like you would in any other vehicle. Provided the batteries are charged, the X5 will not fire up the engine unless you push past a pre-determined threshold with the gas pedal, or go above 135 km/h.

A few different drive modes are available: Sport, Hybrid, Electric, and Adaptive.  Sport will engage the engine and electric motor at the same time for maximum thrust; it also firms up the steering and suspension. Hybrid will use the X5’s computing power to determine the combination of gas and EV power to net the most efficiency. Electric will keep you in EV mode until the batteries deplete and adaptive works with your driving style: sporty driving when you want it and comfort when it’s time to slow down. 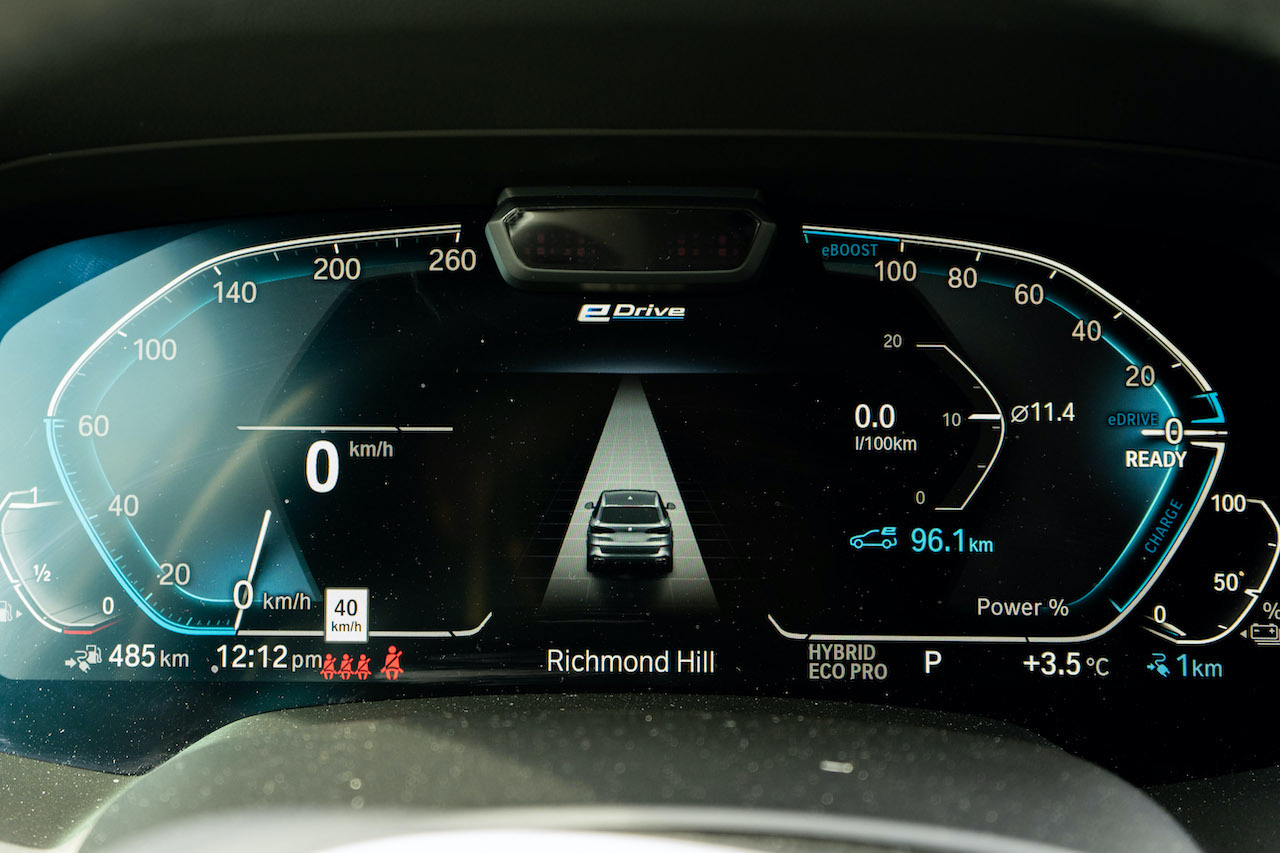 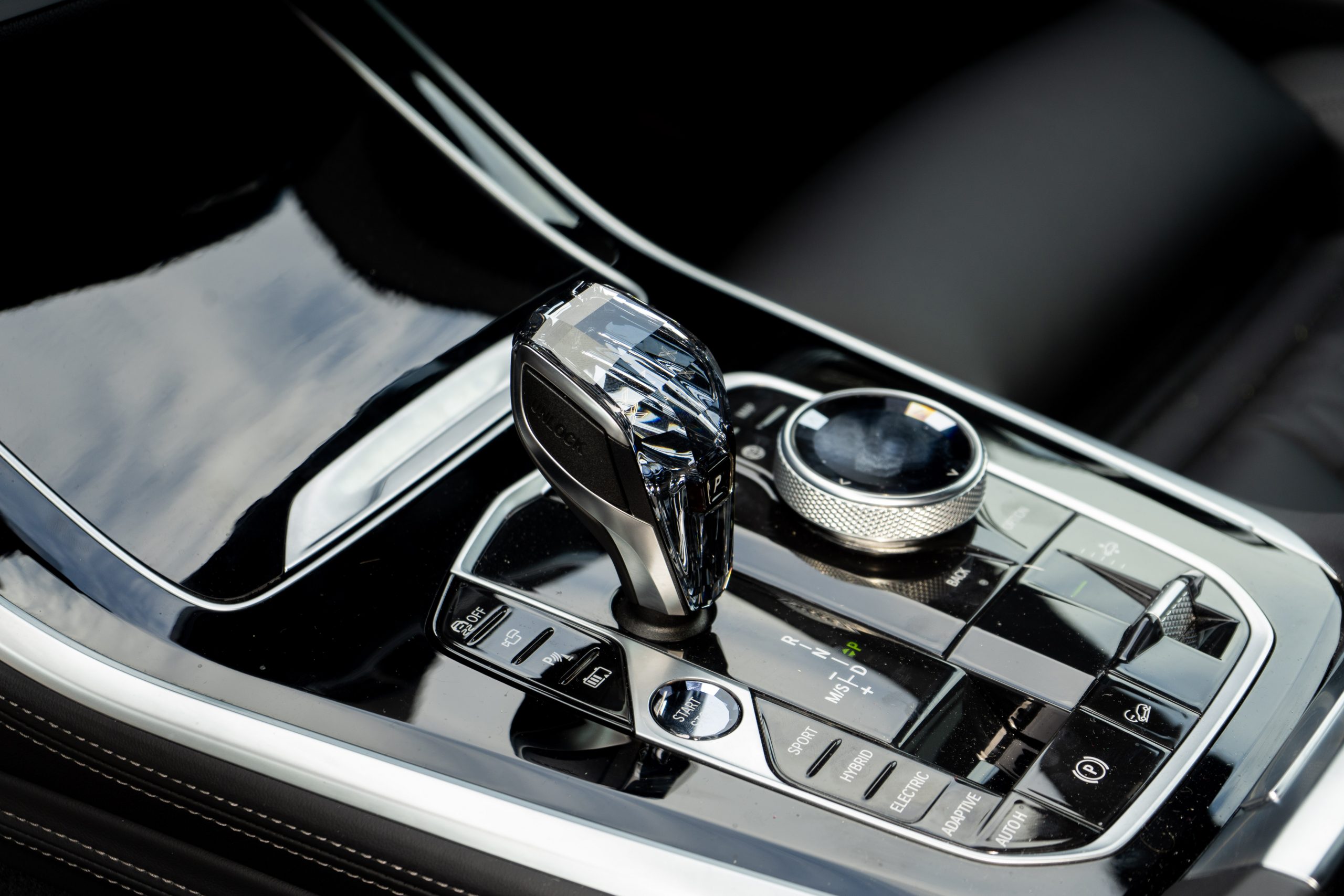 A battery management system allows the driver to pre-program the desired battery level that will be maintained as long as the option is selected.  If you don’t want your battery to drop below, say, 50 per cent, the engine will actively engage to maintain that charge. It would sure come in handy if you had to drive into areas where congestion and smog charges apply, which admittedly is something you’re more likely to encounter in Europe than here.

When driving normally the X5 45e feels, well, normal.  It’s very quiet, isolated, and the ride quality is excellent, further enhanced by plush leather thrones that offer adequate support when your driving gets friskier.  Sport mode sharpens everything up, but the 45e feels heavy and a bit cumbersome to hustle around corners. The steering is numb, and there’s a bit more body roll then I was expecting and you get the sense that out of all the X5s this one wants to be pushed the least.  The large battery pack probably has something to do with it and a curb weight of nearly 2500 kgs is hard to hide so this isn’t much of a surprise.

Not having the option to charge the vehicle every night, I mostly used it like any other hybrid and got right around 11.5L/100 km with an even mix of city and highway driving.  While this isn’t much better than the gas-only X5 40i, a fully charged battery will see that rating drop by 50 per cent or more.  The EV range estimates are also quite accurate and with a fairly aggressive brake regeneration system, I was able to see right around 40 km to a fully charged battery with outside temps consistently below zero Celsius.

These plug-in hybrids are transitional vehicles until EVs become mainstream. You get some EV benefits but by and large they are a more complex affair and the electric range is only good for short distances. A vehicle like an X5 is more suited to longer drives and family excursions and the small bump to fuel economy this PHEV delivers isn’t anything to write home about especially when considering how good some EVs have become. 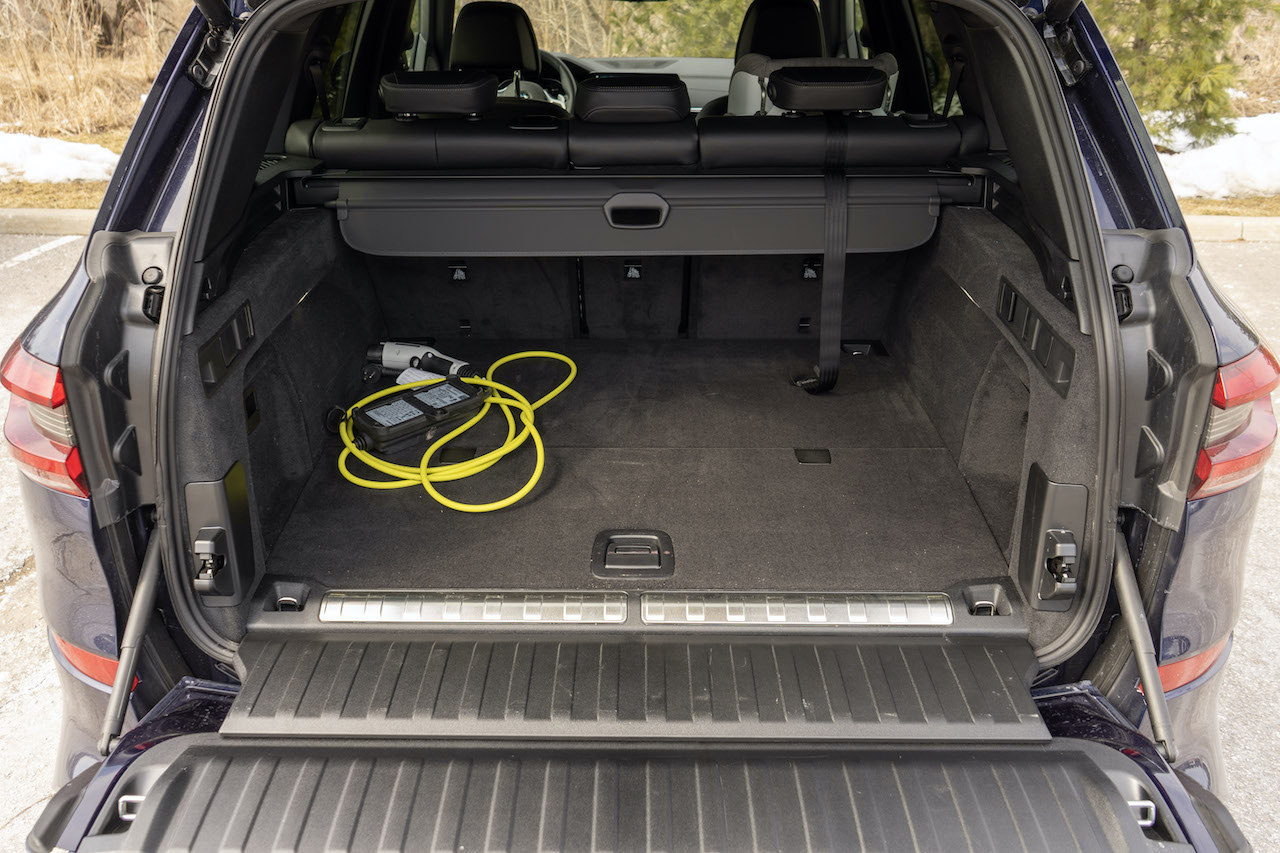 But if your commute was a short one, and you were able to plug in every night this X5 45e might make perfect sense and will surely save you some money in the long run. Either way, you’ll get one of the best-balanced and most versatile SUVs on the market today. 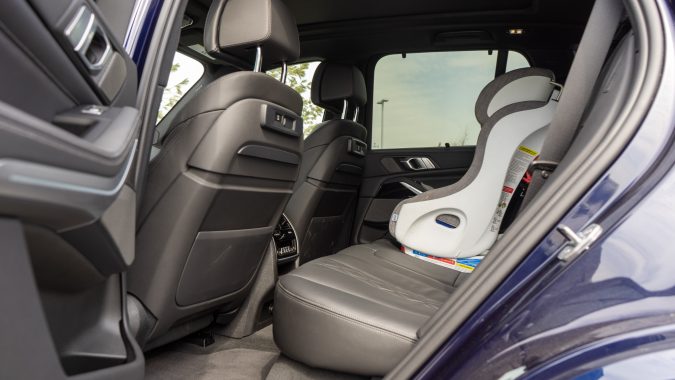 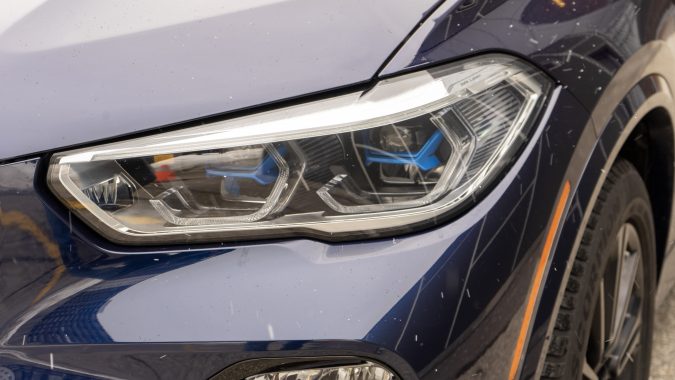 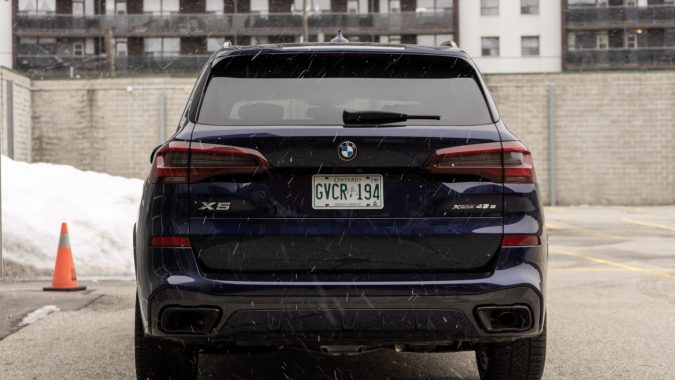 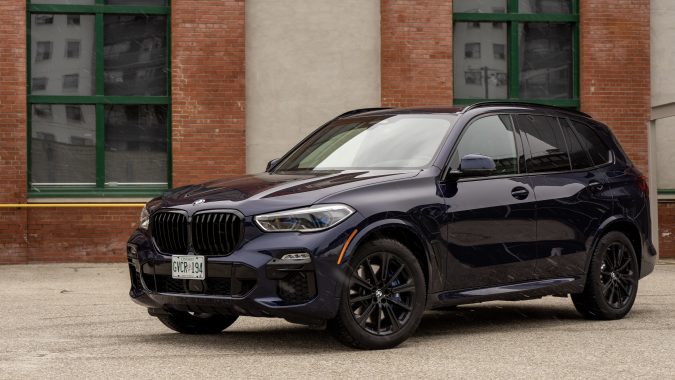