The gold standard in mid-size trucks – for now

It never fails – we spend all summer raving about sports cars on these pages, but when the time comes to haul around dirt for the fall garden clean-up, what do we all want in our driveways? Pick-up trucks, of course. For suburbanites, mid-size pick-ups are often an ideal balance between performance, exterior storage, and maneuverability. The downside is that most mid-size trucks are overdue for a redesign and don’t yet have some of the safety and convenience features that today’s buyers are looking for. That’s set to change in the next couple of years, but in the meantime, this Chevrolet Colorado ZR2 – priced at $54,508 with destination fees – is the gold standard for the potential that these smaller trucks hold.

The standard engine for the Colorado ZR2 is a naturally aspirated 3.6-litre V6, which produces a peak of 308 hp at 6,800 r.p.m. and 275 lb-ft of torque at 4,000 r.p.m., and is paired with an eight-speed automatic transmission and standard four-wheel drive. On the one hand, were there any one thing I’d pick apart most in this truck, it’s that it would be nice to have some more lower-end torque. On the other hand, if that’s important to you, then you could always opt for the 2.8-litre four-cylinder turbodiesel option, which is mated with a six-speed automatic and makes a much lower 181 hp but produces 369 lb-ft of torque from 2,000 r.p.m. Plus, rumour has it the next generation of Colorado will drop the V6 in favour of a turbocharged four-cylinder, so if that seems distasteful to you then you may want to snag one of these now.

What makes the ZR2 special – apart from standalone off-roading features like the standard front and rear electronic locking differentials, cast iron control arms, an Autotrac transfer case, multiple skid plates, and a 3.5-inch wider track and two-inch suspension lift relative to the base truck – is the Multimatic dampers. These spool-valve dampers go from the huge suspension travel needed for the roughest trails to smooth handling on the highway, all without any intervention from the driver whatsoever. This truck also tows more than you might think at a maximum rating of nearly 3,500 kg (7,700 lb). 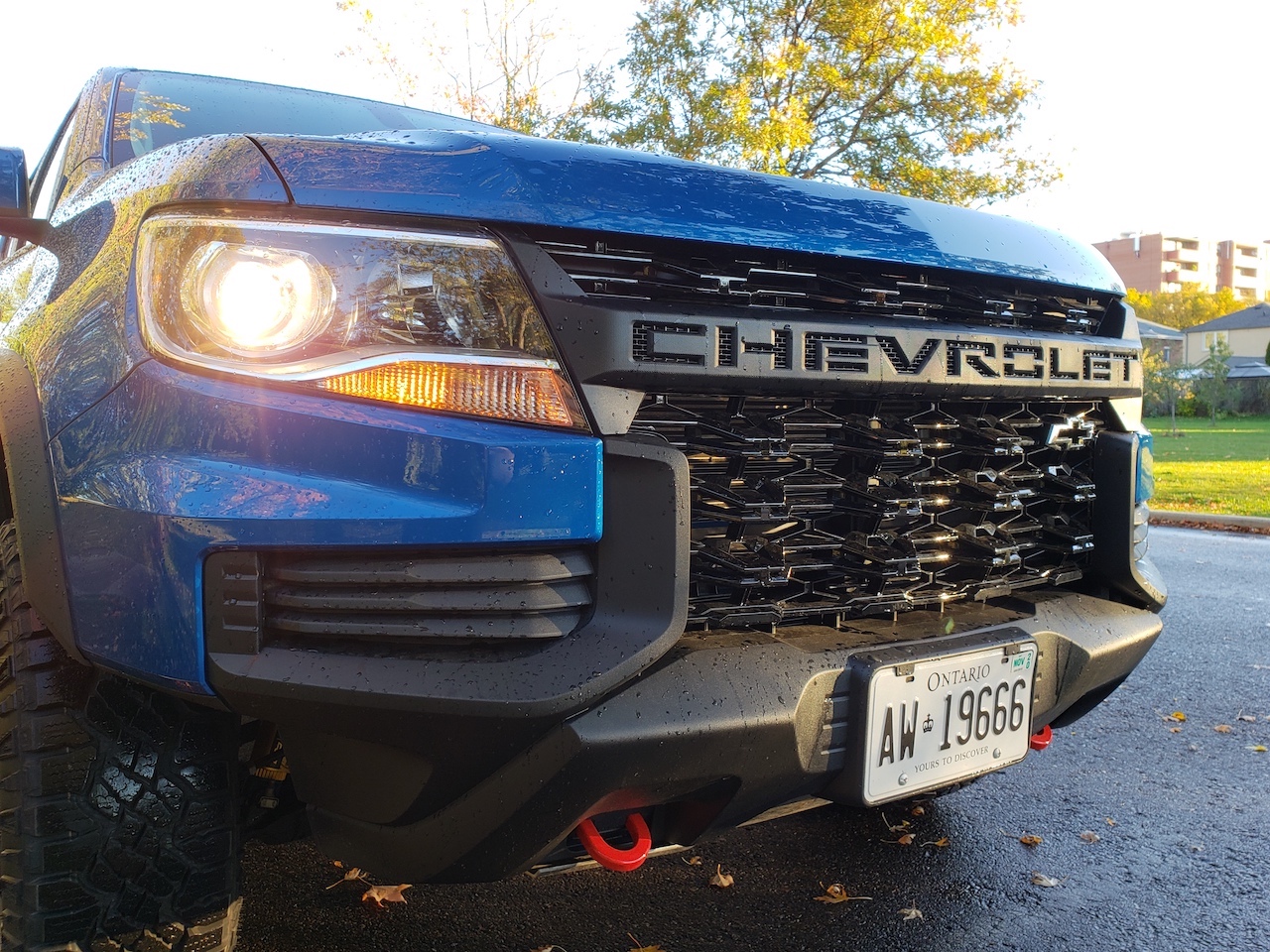 However, all of this does come at a cost fuel-wise. Natural Resources Canada rates the fuel consumption of the Colorado ZR2 at 15.0 litres per 100 km for city driving, 13 on the highway, and 14.1 combined, the latter being precisely where I landed over a week of suburban testing.

Driver assistance and safety are where the Colorado shows its age the most. Many of the modern safety features found on larger trucks are not available here at all: blind spot monitoring, lane keep assist, adaptive cruise control, and collision mitigation are all missing from the option list. This will undoubtedly be righted when the next generation launches in a couple of years; but today this is one of the most significant factors pushing buyers into trucks that are larger than they truly need.

While the 2021 Colorado ZR2 comes with its own grille design, a blacked-out and scaled-down version of the one found on the Silverado, there are a couple of elements in the interior that give away the truck’s age. The design is bland and dated, and having to push a key into a steering column seems off-side these days for a vehicle priced at more than $50,000.

However, Chevrolet has otherwise done well at keeping technology features with the times. The ZR2 has standard heated front seats, a heated steering wheel, up to four USB ports depending on optioning, and a wireless phone charger (into which my Samsung Galaxy S9 doesn’t fit, but most iPhones would). 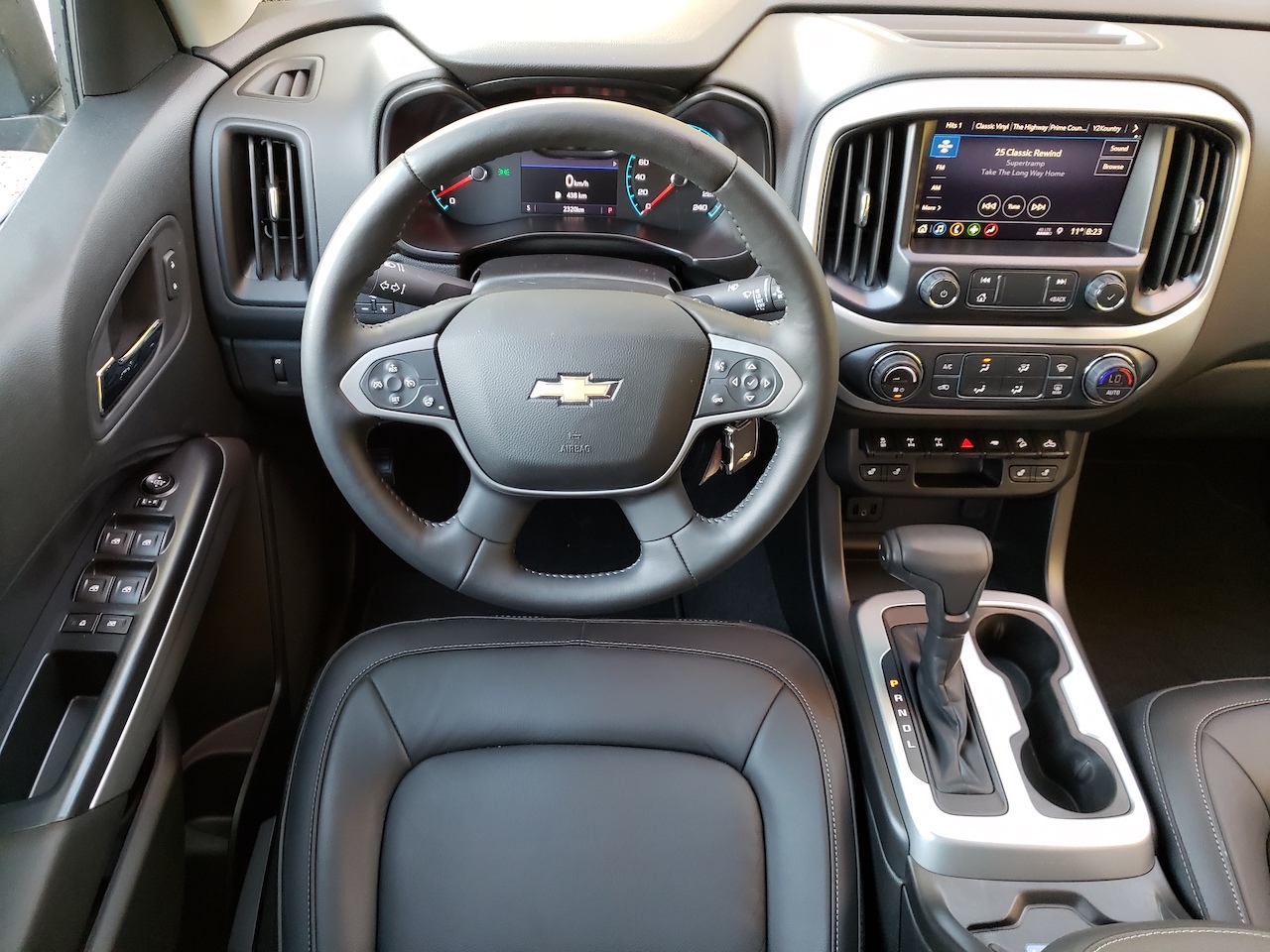 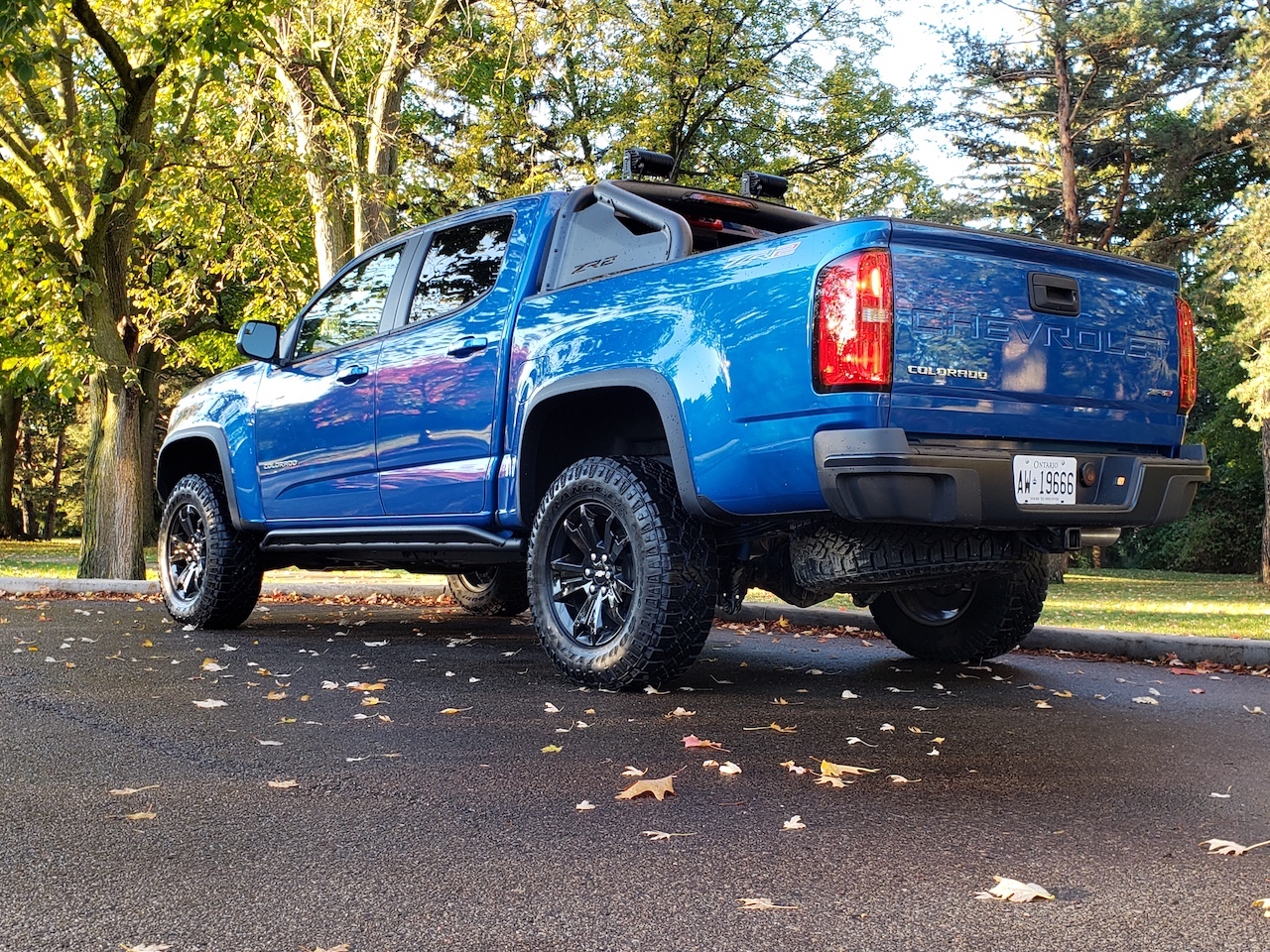 Chevrolet’s latest infotainment system is deployed here on an 8-inch touchscreen, which is an intuitive and user-friendly system I find to be among the better ones on the market. It’s available with on-board navigation, but both Android Auto and Apple CarPlay are standard equipment, so I’d just as soon rely on my phone for navigation and skip the added expense.

The mid-size truck segment is primed for a renaissance. This is the right size of truck for a whole lot of folks, and it won’t be a surprise if people start flocking to them in a couple of years once they start becoming available with the safety and convenience features buyers ask for most often. In the meantime, the exterior looks and outright performance of the 2021 Chevrolet Colorado ZR2, and the effort to keep technology features up to date, make this truck the current cream of the crop.