If you’re looking for a large family SUV with three rows of seating and you also want it to be hybrid you pretty much have two choices: the Toyota Highlander Hybrid, and the subject of this review, the Ford Explorer Hybrid.

Both of these near full-size SUVs are on a mission to save you money at the pumps. But both go about it quite differently.

If absolute efficiency is your main criteria, the Toyota will serve you well. However, if passing power and the largest towing capacity are what you need, the Ford would likely fare better.

I found the Explorer to be a bit of a mixed bag, one that I wanted to like more than I did, mainly because I dig the way it looks. I feel the Explorer’s evolutionary styling has reached a high point with this latest iteration. Its slim headlamps, commanding grille, wide stance, and muscular proportions strike a great balance between elegance and utility and would fare just as well at the valet as it would on the school run. And if you aren’t keen on advertising the greenness of your vehicle, you’d be happy to note that it took me a few minutes to spot the tiny little hybrid badge on the rear liftgate, so telling this apart from your run-of-the-mill Explorer is virtually impossible for all but the most knowledgeable. 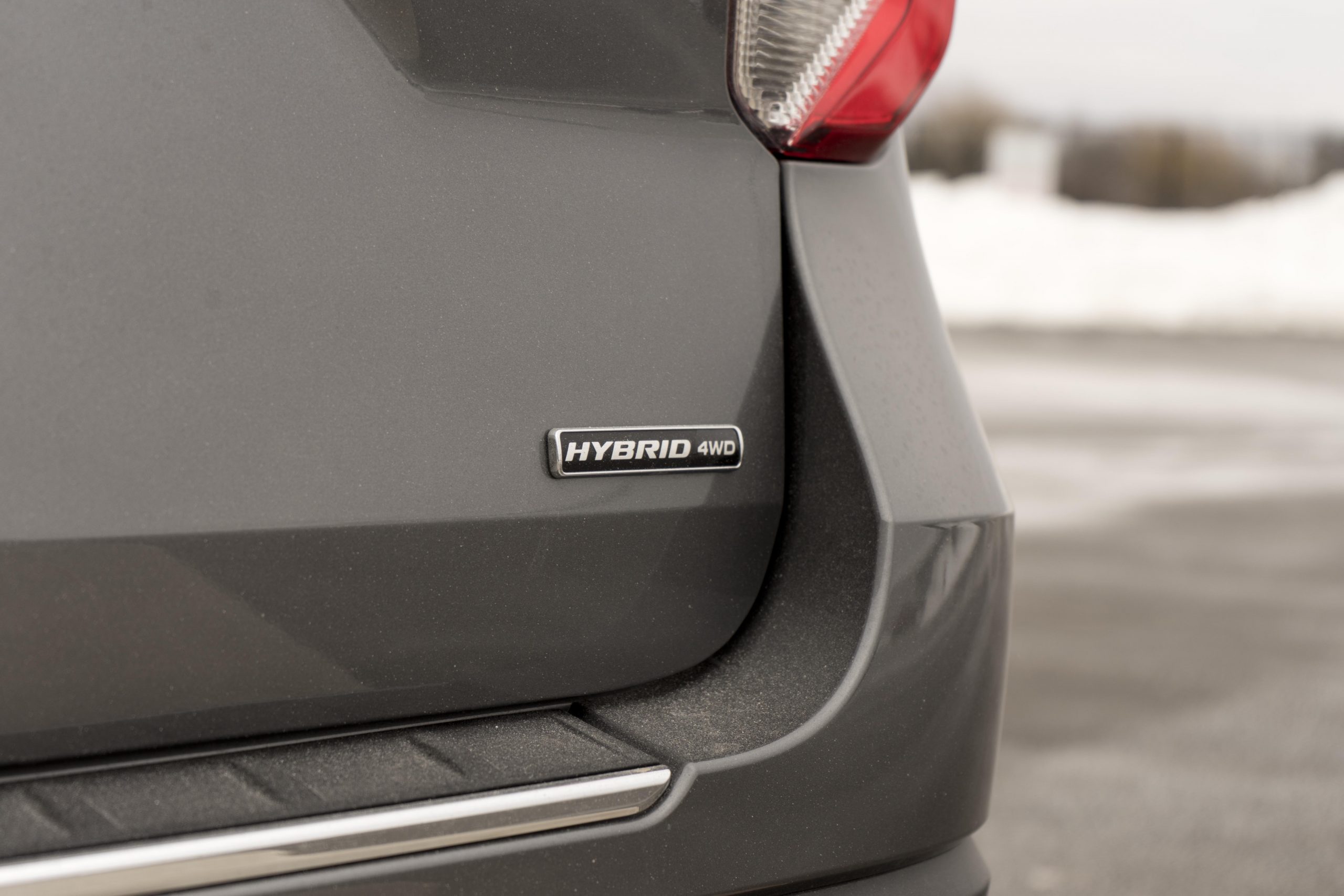 The cabin on the other hand is a bit of a letdown with a sombre design, some poorly fitted trim pieces, and a tacked on infotainment screen that looks like an afterthought. More expensive trims come with an even larger, rather goofy-looking portrait-oriented screen, making me happy that my tester wasn’t equipped with it.

There are good things, though, like a myriad of thoughtful storage cubbies, ample room to move about, including in the third row where my 6-foot frame was able to fit just fine, a large cargo area, and generally excellent ergonomics with plenty of physical buttons and knobs so you don’t need to dive into the infotainment to do something like turn on the heated seats, or the A/C. 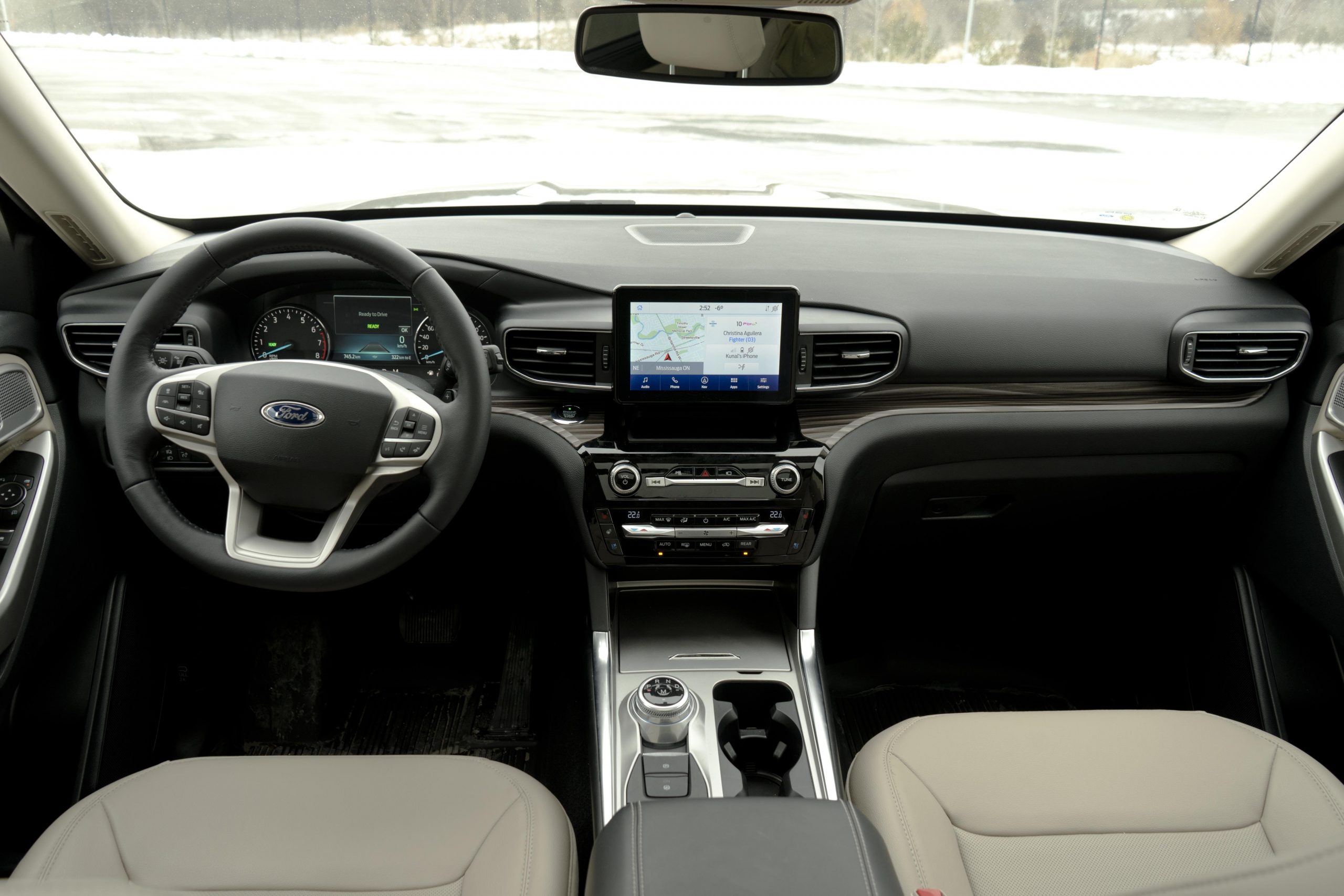 The Hybrid powertrain is available exclusively on the Limited Trim so it comes well equipped out of the box with intelligent 4WD, 20-inch wheels, voice-activated navigation, a terrain management system with multiple drive modes, 360 degree camera, wireless charge pad, remote start, and a heated steering wheel. You also get standard second-row captain’s chairs and a power-folding third row.

You’ll pay quite a bit for all this with a base price of $53,799 representing quite a premium over a base level Highlander Hybrid, although the Ford does give you more content.

Where the Toyota uses a 4-cylinder and a CVT, Ford ups the ante with a 3.3-litre V6, and a 10-speed automatic transmission. An electric motor sandwiched in between the engine and transmission provides extra power and torque. The Highlander uses a trio of small motors including one on the rear axle for electric all-wheel drive. The Explorer uses a real mechanical AWD system.

With a combined power output of 318 hp and 322 lb-ft of torque, the Explorer Hybrid feels downright muscular with a great exhaust note and chunky power delivery that you wouldn’t expect from a hybrid. A 1.5 kWh battery pack provides electric operation for short distances at lower speeds and under light throttle usage.

The problem here is that the Explorer is a heavy vehicle and that small battery pack can only do so much, so you’ll be dipping into gasoline power more often than not. I try to drive hybrids like I do their gas-only counterparts and with the Explorer Hybrid my mixed road driving netted a rather disappointing 14L/100 km. With about 60 per cent of that on city streets, your experience might vary but the Highlander Hybrid I drove a few months prior used just 7L/100km, exactly half the fuel the Explorer did. And that’s really hard to ignore. 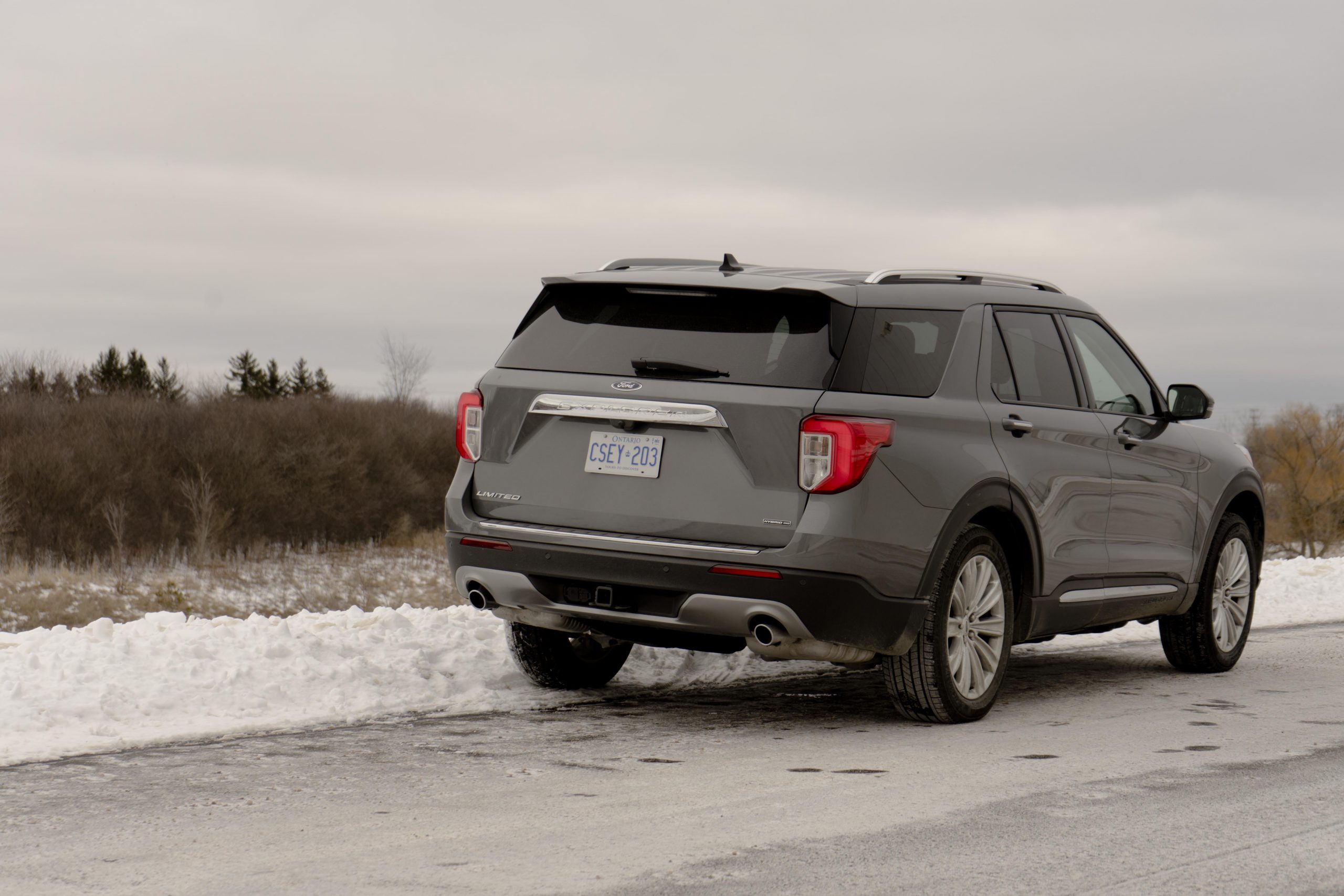 It’s an enjoyable drive, though, with an abundance of torque, whisper-quiet operation, and a comfortable and planted ride. The rear-biased 4WD system is also excellent on a snowy road, and even equipped with an all-season tire, the Explorer felt confident and controllable. That’s still not an excuse for not fitting a real set of winter tires, as traction is still limited. 4WD might get you going faster, but it doesn’t make an ounce of difference when it comes to slowing back down.

If there’s one thing that gets in the way of the driving experience, it’s the 10-speed automatic and its clunky shifts, more obvious at low speeds. I found it indecisive and prone to gear hunting, getting downright confused as to what gear it should be in under certain scenarios.

There’s a lot of good things about the Explorer and I feel given time it will be a much better overall product than it is right now. You should definitely not dismiss it because it’s a very good family vehicle, the tech is easy to use and works really well, and if you’re familiar with Ford products you’ll probably really like it.

I would, however, recommend against the hybrid. The base turbocharged 4-cylinder is just as powerful and only slightly less efficient. Natural Resources Canada actually rates its fuel consumption lower on the highway. And it will even tow more. 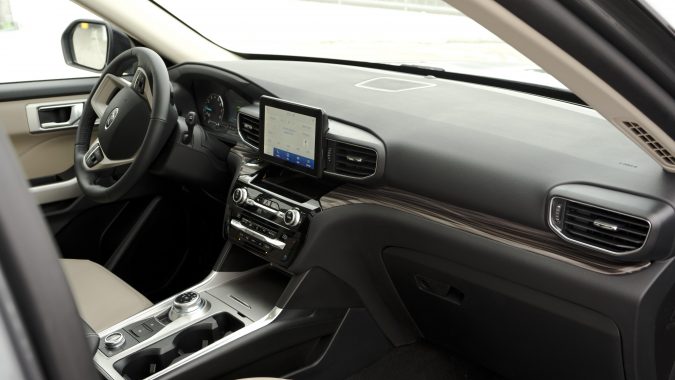 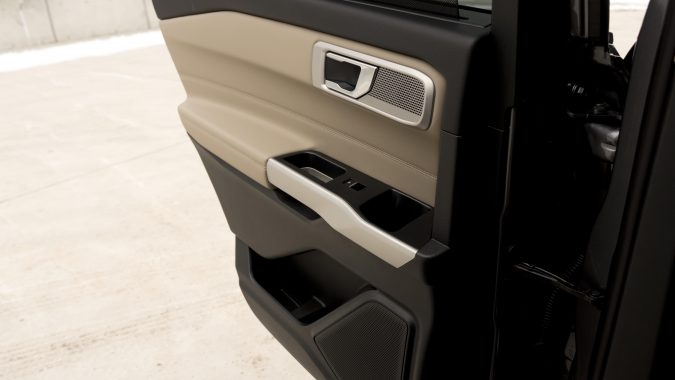 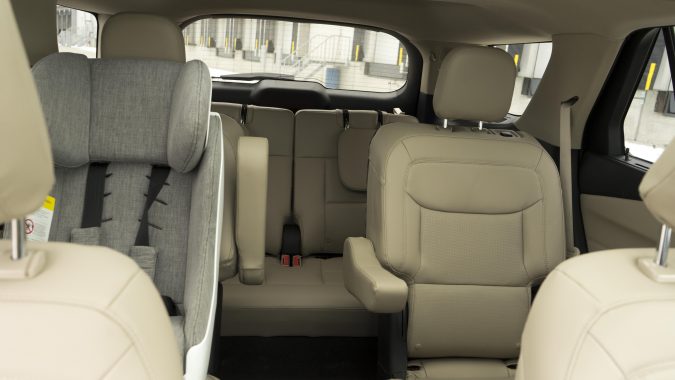 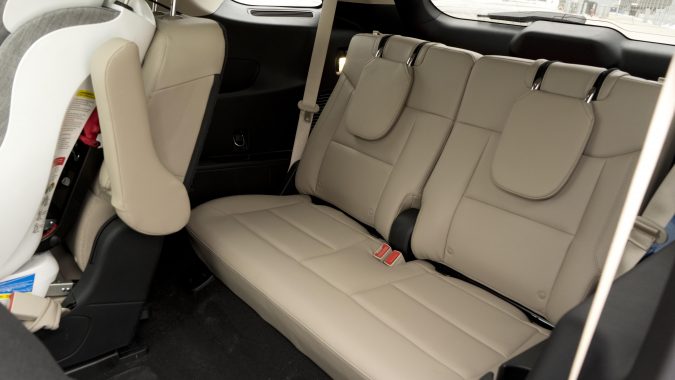 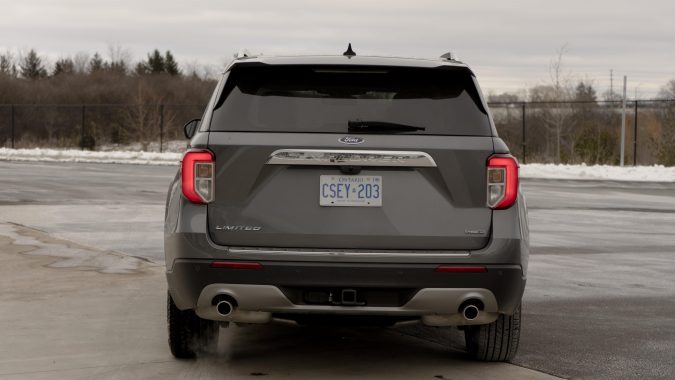 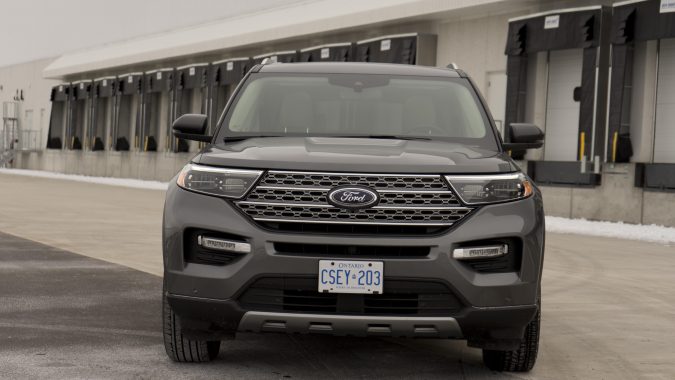 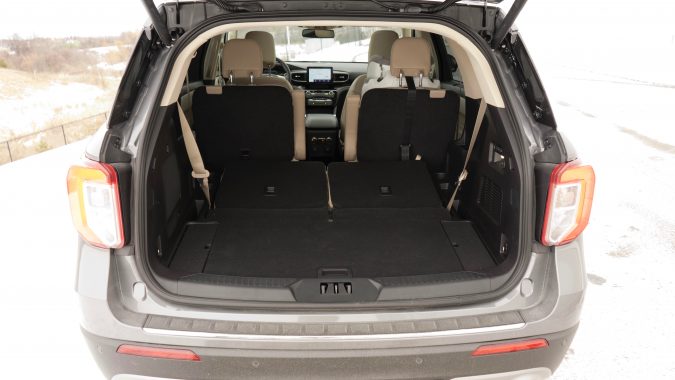