Some carmakers think the sedan is dead.

Others will look at nearly 300,000 sales in compact sedans sold and come to the conclusion that the reports of this segment’s death are greatly exaggerated. Hyundai has taken advantage of some competitors’ abandonment of this field to move their Elantra into third place in this race, nipping at Toyota Corolla’s heels with Honda Civic still leading the way.

The mostly-all-new 2021 Elantra is poised to continue the fight. It is on sale now, starting at $17,899 for the base “Essential” trim level. This version doesn’t get all the safety technology, but does have the same basic engineering as the other trims, but at that low price point. It comes with a six-speed manual transmission, and is expected to account for only about two per cent of Elantra sales, mostly in Quebec.

The engine is the “mostly” part of that “mostly-all-new” comment. It’s still the 2.0 litre twin-cam quasi-Atkinson cycle four cylinder, developing 147 horsepower at 6,200 r.p.m. and 132 lb-ft of torque at 4,500 r.p.m. Upgrades such as an electric oil pump which only pumps oil when it is needed have improved fuel efficiency by six per cent. Not a lot – but every bit helps – and comes in at a combined NRCan number of 6.4 l/100 km, which is excellent.

Other powertrains are in the works for Elantra, including an electric, a hybrid, and the one I know I’m going to love, the race-bred performance-oriented N model. A CVT (Continuously Variable Transmission) is optional ($1,900) on Essential and standard on “Preferred” ($21,899) and “Ultimate” ($25,599) trims. This is Hyundai’s own design, which is probably why they call it an IVT (Intelligent Variable Transmission). Needless to say, the Elantra is front-wheel drive.

The demographic profile for Elantra suggests the buyer’s average age will be 44. But it’s not a standard “bell curve”. Rather, there appear to be two peaks, one for younger and often first-time vehicle buyers, the second of older shoppers, possibly empty-nesters who have come out of bigger, more costly-to-run SUVs. 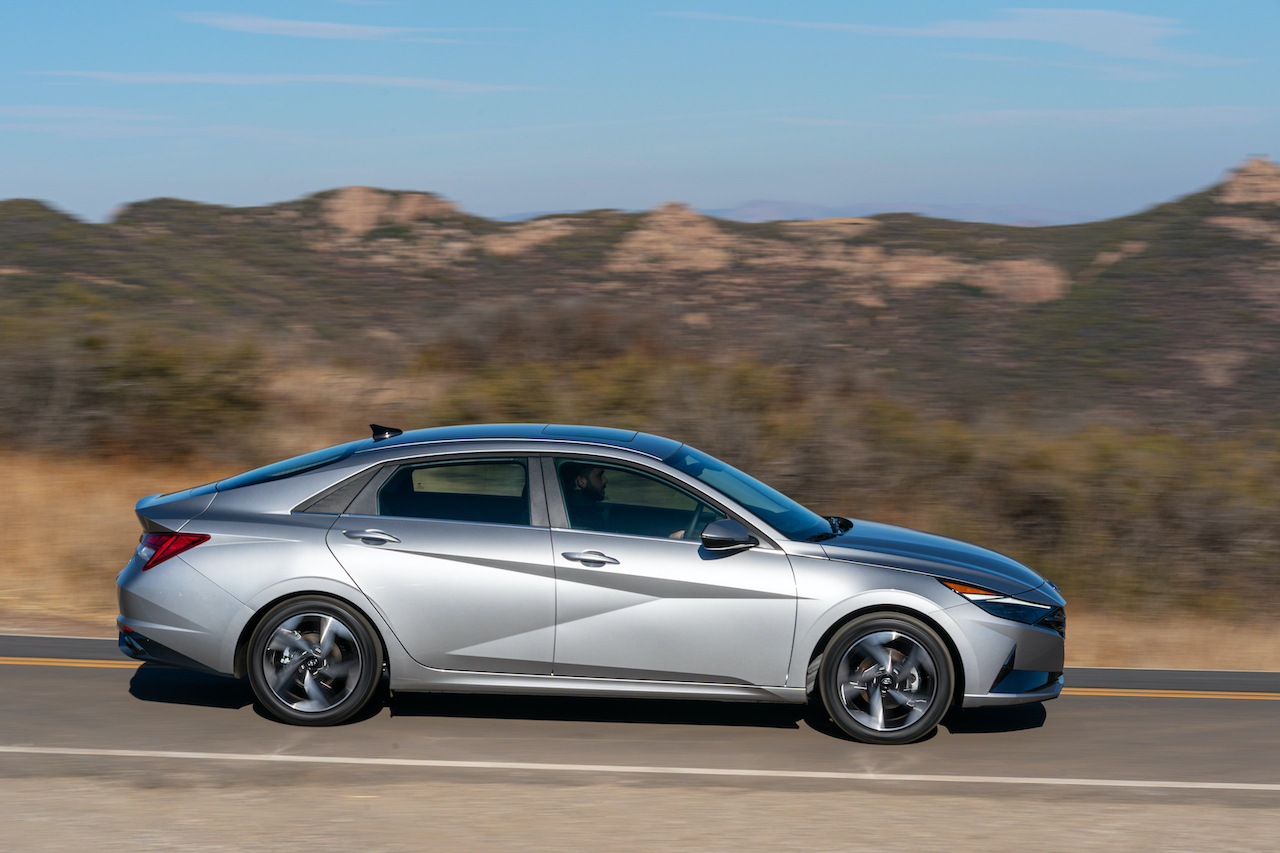 The Elantra aims to appeal to both.

Steve Flamand, director of product and corporate strategy for Hyundai Canada, allowed that Elantra’s styling is “unique”, with the smooth uncluttered flanks of its predecessor and just about every other car in the market, replaced by something Hyundai calls “Parametric Dynamics”.

No, I have no clue what that means either. But the things you’ll notice first are the bulges and swoops on the body sides, which seem counter-intuitive for good aerodynamics. It took me a while to get used to it, but it sort of grew on me. All Elantras have a better-than-usual-for-this-class level of trim, design and features. Everybody likes those.

Flamand noted that the overall plan for Elantra was the right size, the right safety, and the right degree of connectivity. Everybody also wants safety, but the connectivity thing is presumably more important to the younger demographic slice.

But like Mazda and General Motors in some models, Hyundai seems to have figured out that a touch screen to do anything in a car is not really the safest way for the driver to operate a vehicle because it requires you to take your eyes off the road to work it. This is made even more difficult in Elantra because there’s no ledge on which to rest your hand when you’re trying to poke the correct square centimetre of the screen. Hyundai’s own Sonata does this much better.

So Elantra also offers a row of push buttons below that central screen giving you an alternate access point to a series of functions such as SatNav and sound system. They are easier and safer to use, and closer to the driver as well. And there are proper round knobs for right and left side air conditioning temperature. 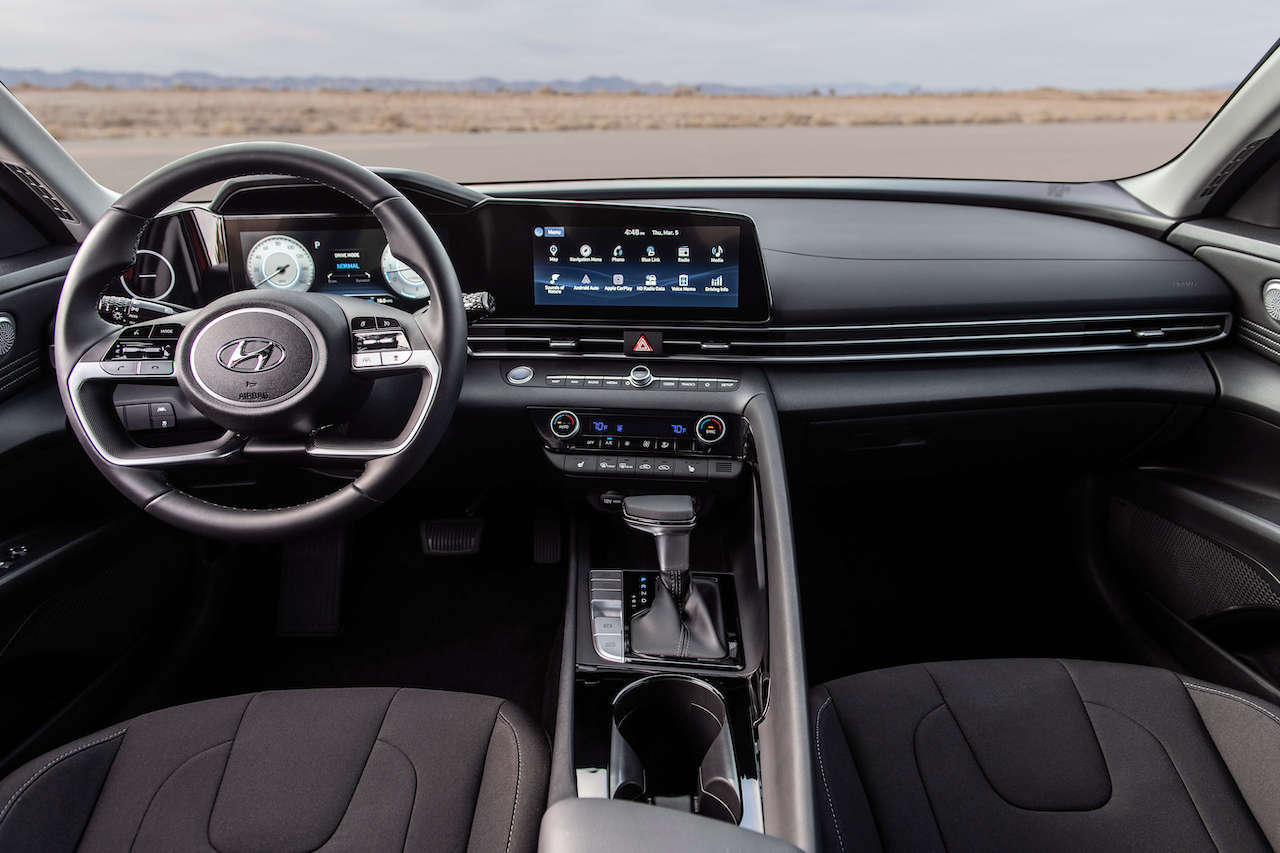 An upholstered bar runs down from the right edge of the centre screen to the console. Originally this was a styling thing to emphasize the cockpit-like feel for the driver. Then someone in the design studio realized that the passenger might want to have their cell phone and other equipment plugged in, so they cut a hole in this bar to allow the cables to pass through.

Then someone noticed that this also provides a grab handle for the passenger if the driver is taking advantage of the car’s nimble handling. Serendipity… Thankfully there’s no head-up display to get in your way of seeing what’s actually down the road.

Flamand added that Hyundai is trying to move a lot of the high-tech gear down into the lower reaches of the product range. Some of this tech is useful – stop-and-go snooze-and-cruise is a boon in heavy traffic; the bright back-up camera view is always useful; the rear seat occupant warning system lets you know if you’ve left a pet or, worse still, a child back there. Some of this tech is, in my opinion, useless, like the “there’s-no-such-thing-as-a-blind-spot” detection system.

As is well-known to long-time readers, I am not enamored with such technologies as remote start system, and departure/lane keeping assist, lane follow assist, and the quasi-automatic driving. I understand that the market demands these technologies, but I am rather old-school and people should pay proper attention to the road and to what is happening around them at all time; and not rely on technology to do that for them. Android Auto and Apple CarPlay are both theoretically available, but apparently there are some licencing issues to be sorted for the latter, and which should be resolved soon.

Hyundai invited us to Ottawa to test the new Elantra, the first real “press trip” since the COVID-19 crisis hit. Everything was handled very safely, socially-distanced and all. Kudos to the team.

Our tester was the range-topping Ultimate trim, in a lovely medium-grey paint job, which, like every other available colour – except white – is, a $200 hit. It had all the tech goodies and “baddies” mentioned earlier. It also had the “Sunroof and Tech package” ($2,700) which brings two bright clear 10.25-inch screens, one in front of the driver, the other in the middle of the dash, and as you’d guess the seldom-used sunroof. 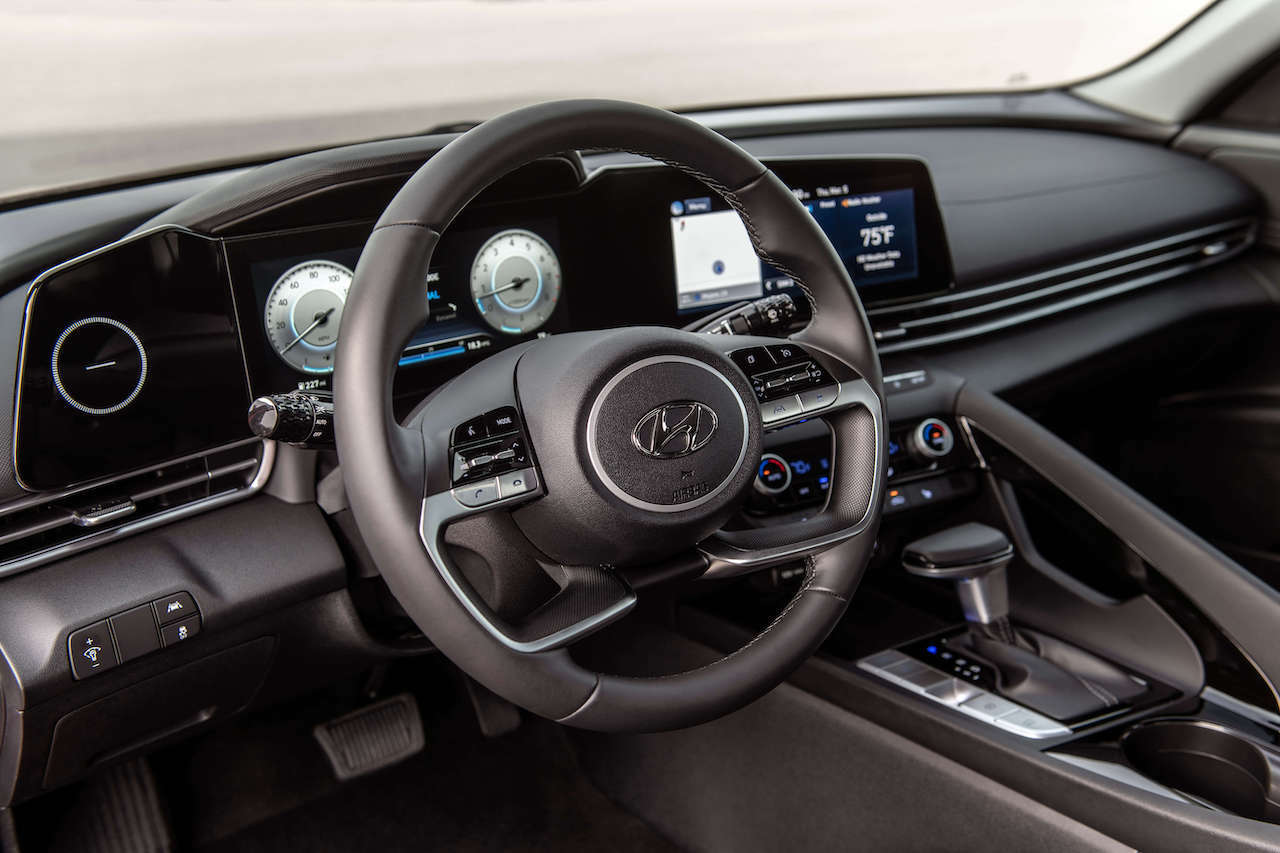 The instrument cluster screen offers a variety of displays depending on your chosen driving mode, such as ECO, Normal and Sport. This package also includes a bunch of other mostly-useful stuff like LED headlights, eight-way power driver’s seat, and heated seats for those usually ignored rear seat riders.

The shifter has the common Park-Reverse-Neutral-Drive format, with a pull to the left for manual shifting. Sadly, they get the manual pattern backwards – it must be back to upshift, forward to downshift, and it isn’t here. Other Hyundai models get this right, and with Albert Biermann, formerly with BMW’s sporty M division, in charge of engineering at Hyundai, it’s surprising bordering on shocking that he let this make it to production.

So let’s shut off all the nanny systems, and see what we’ve got.

That peak torque number is on the low side, and it comes in at high revs. This is where the CVT – er, IVT – comes into its own, allowing the engine to run to its torque peak freely for decent acceleration. It gets a bit noisy at higher revs, but again the IVT keeps things under control. Ride quality is very good, and a back-to-back with a Mazda3 would be an interesting comparison of handling prowess.

I found the seats comfortable. Lady Leadfoot brought along her cushion because the right front seat is not height-adjustable. The rear seat also provides good room for this class.

The screens are bright and clear, and the touch buttons proved easier and safer to work than using the touch screen. Fingerprints also don’t matter there.

The Ultimate trim level comes with a superb BOSE sound system which also lets you play various “Sounds of Nature”, like listening to babbling brooks. Who comes up with this stuff? And who would ever use it? 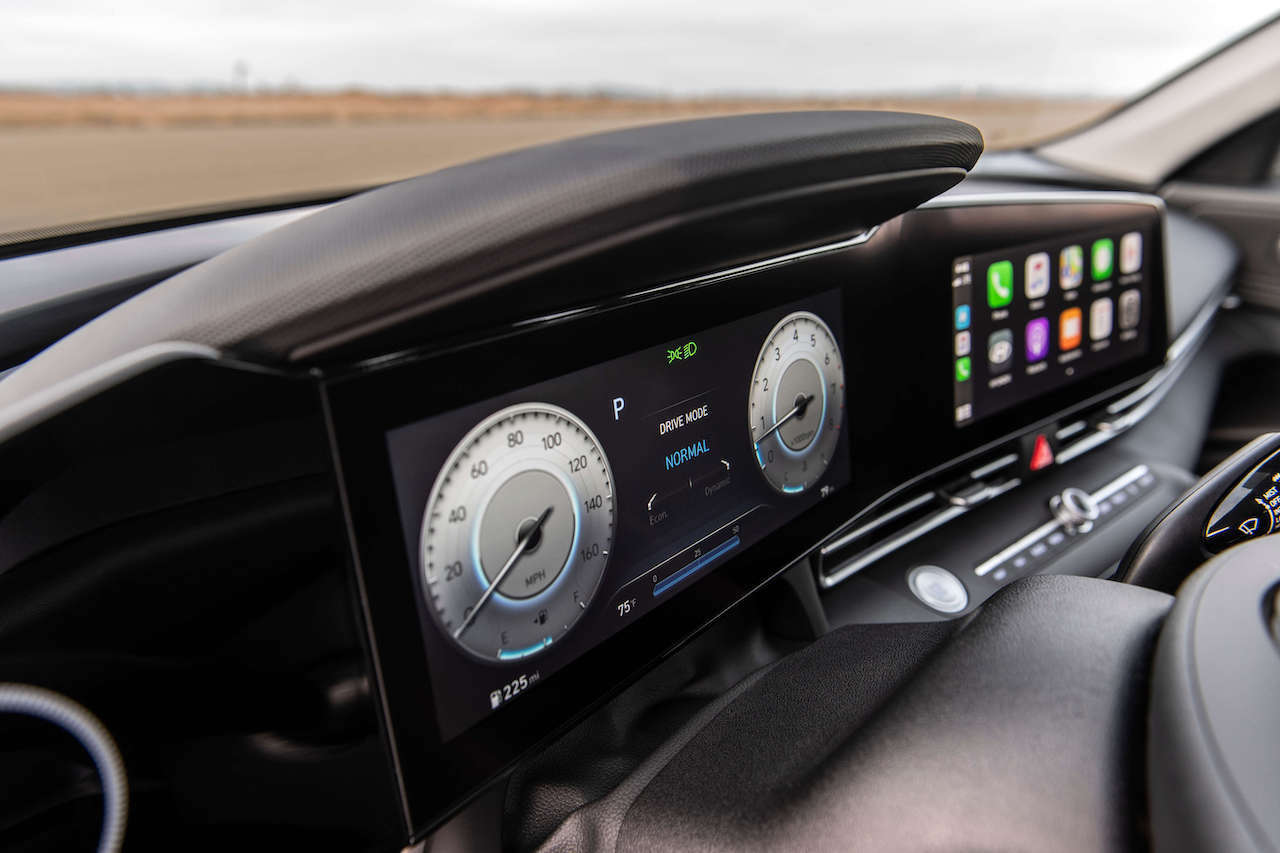 We had some fun negotiating Ottawa streets with what is obviously an American SatNav voice. We were supposed to turn right on “Boulevard St-Laurent”

The actual road sign used the short form for Boulevard, so it read “boul St-Laurent”. The SatNav called for us to turn right of “bowel street low-rent”.

Ok, maybe you had to be there…

The Elantra clearly is on a roll. There wasn’t a whole lot wrong with the previous generation, but they just keep upping their game. Competitors, be warned.