The Gladiator Mojave lives up to its name. It can take whatever you will likely be brave enough to throw at it, yet it doesn't beat you up when you're just driving home from some fun in the dunes.

For those of you unfamiliar with the Spanish language, you can be forgiven for thinking that the “Mojave” desert-runner version of the Jeep Gladiator pickup would be pronounced “MOE-jave”.

It’s actually more like “moe-HAH-vay”. The Mojave Desert spreads across parts of California, Nevada and Arizona, and is famous for, among other things, some of the baddest, i.e. best, off-road trails anywhere.

The 2021 Gladiator Mojave is on sale now. The price sheet I received with this truck says it’s a 2020 model year, although the Jeep web site says the Mojave model wasn’t offered until 2021.

You and your dealer can figure that out.

It had the usual boatload of options that brought the total ticket to $67,965, exclusive of taxes. As usual these days, discounts in the mid-thousands, never mind those three bucks, are often available. If that sounds like a lot of money for an intermediate pickup, you haven’t been truck shopping lately. 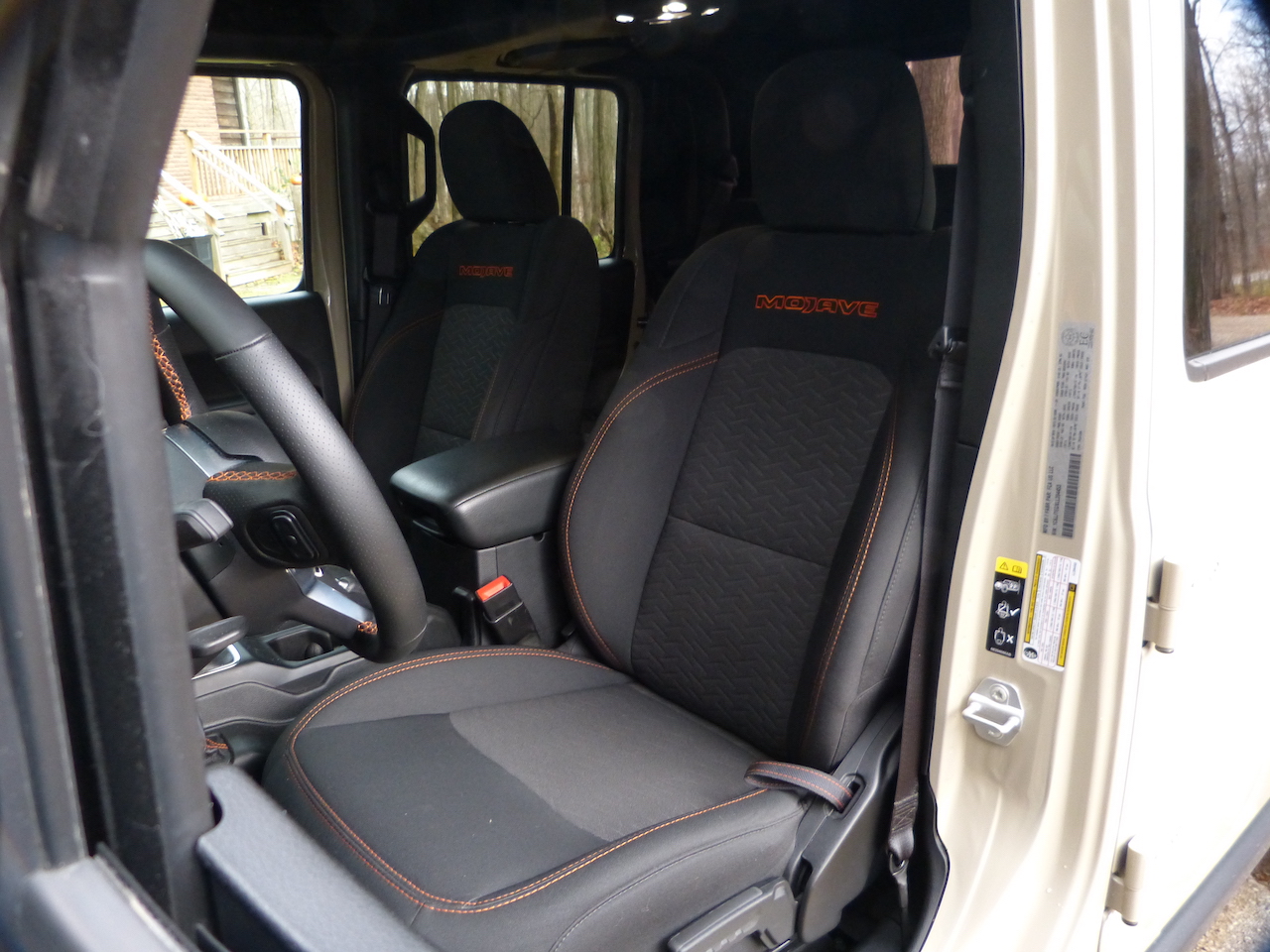 One option my truck had was the cold weather package (heated steering wheel and front seats), the best $700 you can spend in Canada, although not something you might expect in a truck named after a desert. The only engine available with this model is the 3.6 litre Pentastar V6 with variable valve timing and stop/start technology. The relevant numbers are: 285 horsepower at 6,400 r.p.m. and 260 lb-ft of torque at 4,400 r.p.m.

Yes, the 3.0 litre “EcoDiesel” would probably be even better for off-roading with its bundles of low-end torque, but it isn’t offered in Mojave, or with the six-speed manual transmission like my truck had. And it costs a bunch more.

I have tested the Gladiator before, but was intrigued by this model, for a number of reasons.

First, various Jeep vehicles have been granted “Trail Rated” status, meaning they have passed certain standards for axle articulation, ground clearance, manoeuvrability, traction and water fording for slogging through the mud. But Jeep has come up with a new rating for Mojave – “Desert Rated”. This time, the criteria are ride control and stability, sand/dirt traction, ground clearance, manoeuvrability, and something called “desert prowess”.

Key among Mojave’s exclusive bits is a heavily re-worked suspension, including 63.5 cm (2.5 inch) thick internal-bypass dampers, with hydraulic bump stops (looking like a second pair of dampers) equipped with extra cooling to keep the damper fluid from overheating and losing its effectiveness. This was all developed in conjunction with off-road aftermarket specialists FOX, their first foray into the OEM (Original Equipment Manufacturer) business. These bits are designed to maintain their damping abilities after long runs at high speeds in high temperatures. It also raises the truck by 12.7 mm (half an inch) which improves the break-over and approach angles, measures of how steep a crest you can drive over or climb.

Mojave also lets the electronic limited-slip rear differential operate in 4×4 High Range – other models restrict this to 4×4 Low Range. This enables the traction aid to work at speeds up to 80 km/h. Sadly, I didn’t get to test it on anything more challenging than my driveway and a local drainage ditch. 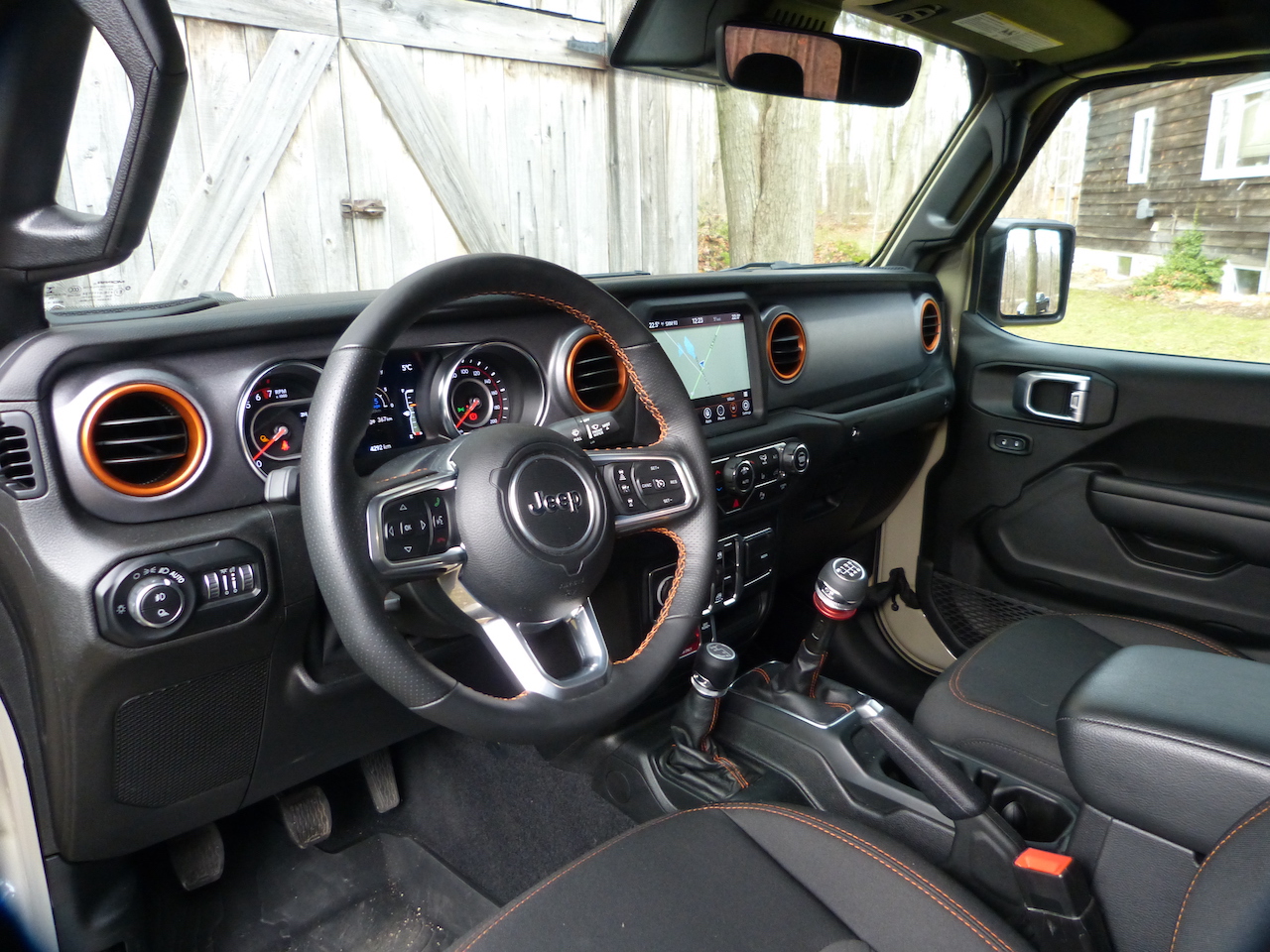 Still, I was able to get a sense of this truck’s capabilities. You might expect a truck with high-speed off-road prowess and heavy-duty dampers to turn your back into a pretzel after a few clicks. Not so. I once had a ride with Larry Ragland in his pickup which had been custom-built for the truck-busting Baja 1000 off-road race, which he won five times. It had even weirder, wilder suspension than the Mojave, with dampers that looked about three metres long.

That thing rode as if on the proverbial cloud. Unlike what’s needed on paved surfaces like race tracks, the objective of a suspension for off-roading is to soak the bumps up so as not to upset the vehicle.

“Compliance” is the word. I took Mojave over the roughest roads I could find, and threw in some pretty awful railway crossings. This thing just ate it up. The second critical thing with this suspension? Previous Gladiators I have driven had a distinct tendency to wander. On the 401, you had to constantly monitor and adjust the steering to keep it in its lane. Not relaxing. I had never noticed this in the shorter-wheelbase Wrangler, which shares much of Gladiator’s underpinnings. You’d think with the longer wheelbase the Gladiator would be more stable, but it wasn’t.

So I was beyond surprised that this characteristic was almost entirely unnoticeable in the Mojave. The occasional slight wander, but nothing alarming. The off-road-capable tires set up a bit of a howl on the highway, and there’s some wind noise as well. One thing I don’t recall from previous Gladiator tests, which may be exacerbated by this off-road suspension, is the turning circle is really big. What looks like a three-point turn might become a five- or seven-pointer.

As noted, the Mojave sits up high thanks to the trick suspension, so climbing up into it without a running board will give you some extra exercise.

Particularly nice were the seats, with plenty of lateral support for those off-road trails, which is equally appreciated in highway cruising. The fabric upholstery is, as always, vastly superior to leather because it’s cooler in summer, warmer in winter, and grippier all the time. Otherwise, this Gladiator is much like the other models in this line. 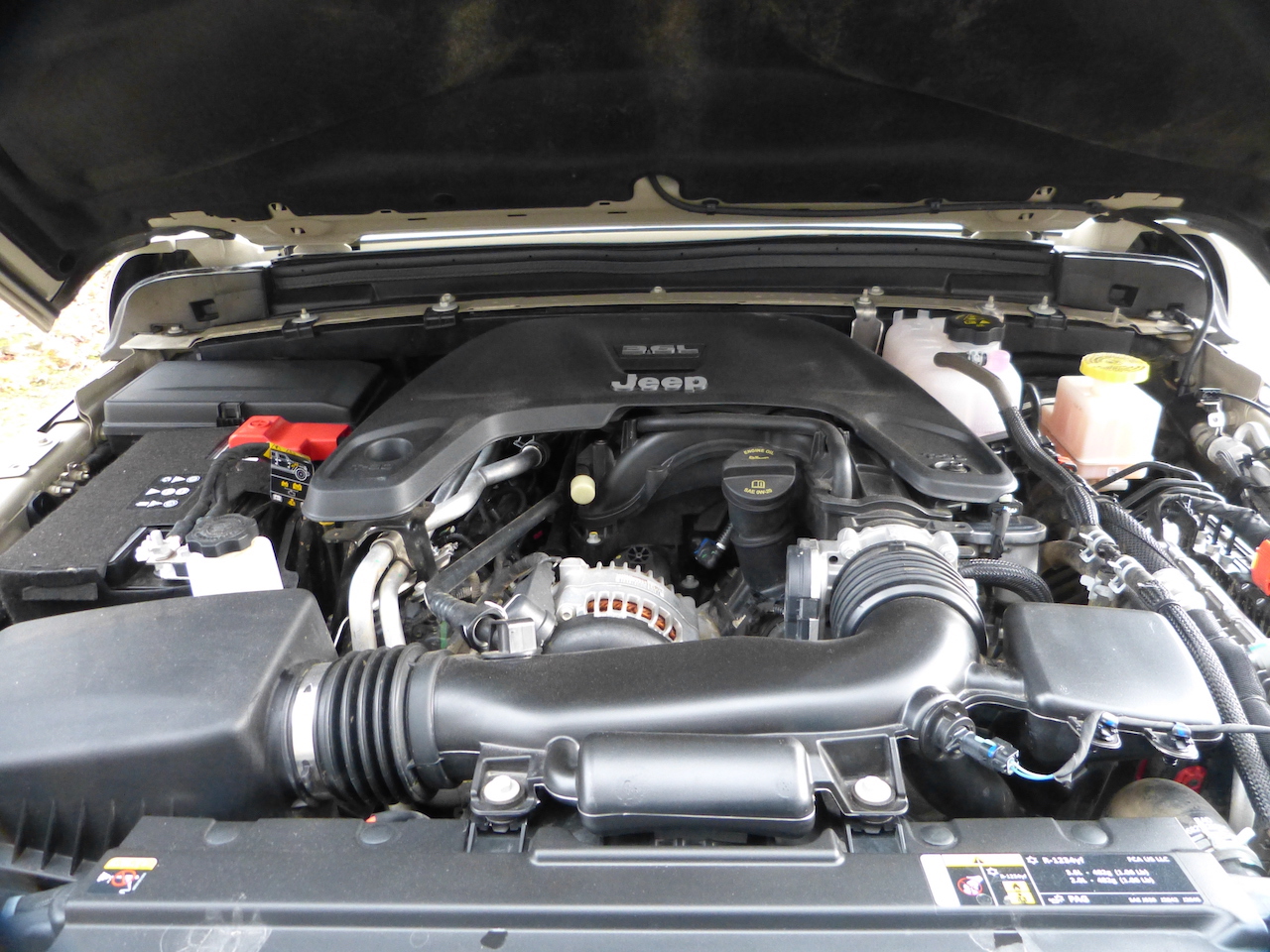 Same well-finished interior, and clear bright gauges, although like most Uconnect systems, when you click on Navigation, you don’t go straight to the map – you have to click again. Especially if you are bouncing along some desert trail at a great rate of knots, you want – nay, need – minimal screen touches. There are nice big round knobs to control the air vents. If you’re in the desert, that’s important…

There are all sorts of connectivity points to keep yourself in touch with your virtual world while you’re out exploring the real one.

The back seat handles up to three, and because the truck is so tall there’s lots of spread-out room for everybody. The rear seat cushions fold up to reveal hidden storage space. There’s also a bunch of tools there to allow you to take the roof and doors off, if you want that really wide-open feeling. But if you’re out in the real Mojave with the ambient air temperatures nudging 50 degrees C. and all that sand flying about, I think you’d be better off buttoning it all up and cranking the A/C up full tilt.

Again, like all Gladiators, the 4×4 system is controlled by a lever to the left of the shifter. Shifting out of 4×2 High Range to 4×4 High is a relatively easy yank of the lever. Selecting 4×4 Low Range is much tougher, requiring a serious pull on that lever. Compared to the one touch of a button to do the same thing in the Land Rover Defender I tested recently, this feels downright agricultural.

I did like the proper pull-up hand brake lever.

Sadly, like all Chrysler and all too many vehicles, Gladiator fails the ignition-off/lights off test. Shut the car off and the lights should go off by themselves, after a suitable delay to allow you to get from your garage to your front door. Why do you need another sensor and another buzzer? It also fails the mirror adjustment test for the drivers;’ side – you can’t adjust it far enough out to eliminate the blind spot. Some better visibility news – there are cameras all over the place to assist you with reversing and working in tight spots. 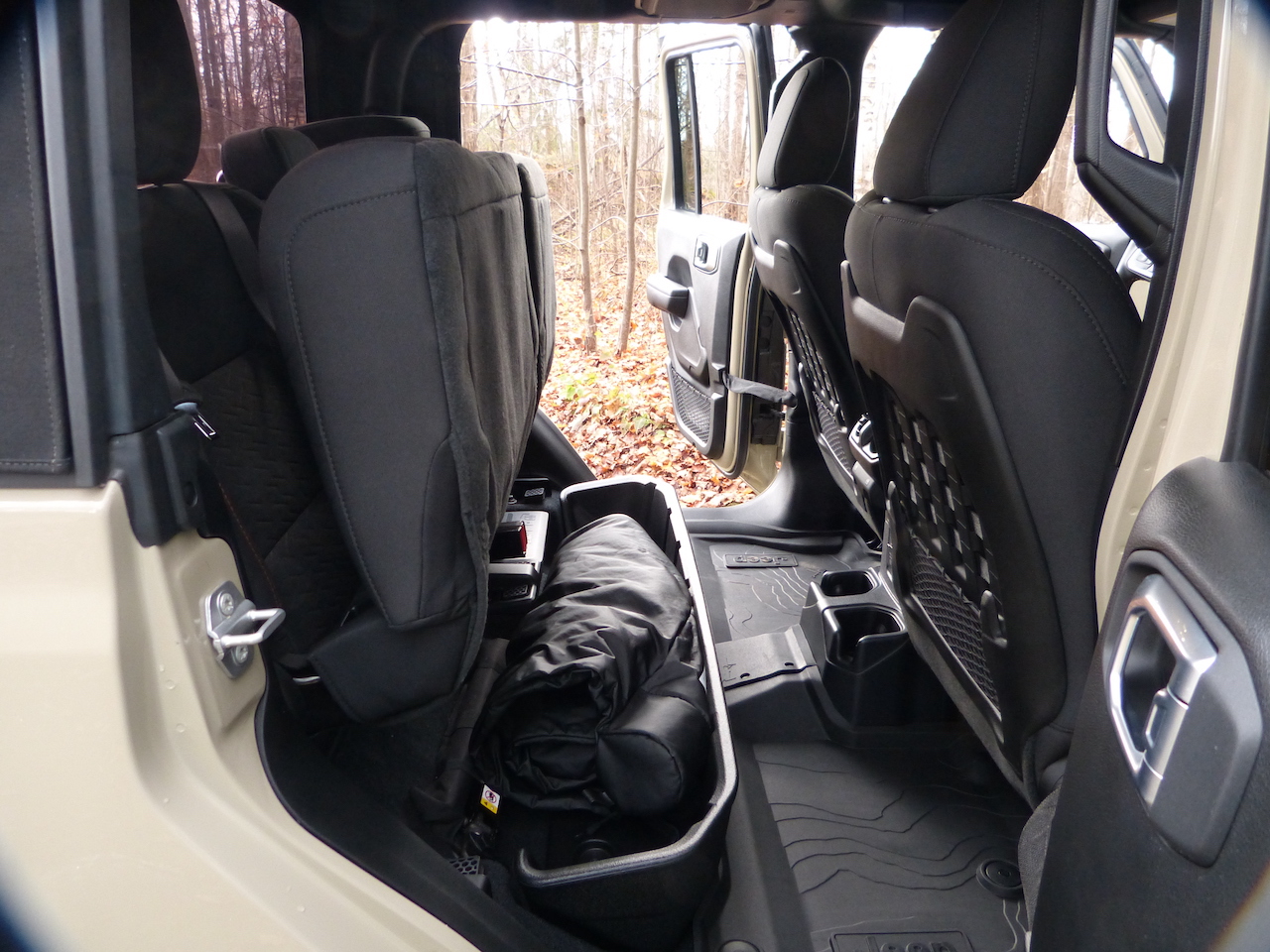 One particularly handy option is a forward-facing camera that gives you a view of what’s right in front of you. This is especially useful if you don’t have a spotter to warn you that a huge rock or tree stump is about to attack that expensive suspension, the skid plates notwithstanding.

The Pentastar engine is low on bottom-end torque, and this Gladiator couldn’t make the Highway 25 hill up the Escarpment without a downshift. Still, the manual transmission from Japan’s Aisin corporation which has produced manuals for Jeep since the mid-1980s, might have been the smoothest-shifting box I’ve driven since the last Mazda Miata I was in.

So for me, the Gladiator Mojave lives up to its name. It can take whatever you will likely be brave enough to throw at it, yet it doesn’t beat you up when you’re just driving home from some fun in the dunes. And like any Gladiator, it still generates more stares-per-dollar than any vehicle I’ve tested in a long while.