After spending a week behind the wheel of the all-new 2021 Nissan Versa sedan, I couldn’t shake the feeling that despite being in a new car, it felt like I was travelling back in time. Sort of.

Allow me to explain.

Back in the mid-1990s, I briefly owned a 1992 Nissan Stanza. It was my mother’s car initially, before I inherited it in 1995. At the time, I was wrapping up my undergrad and only too happy to rid myself of an aging 1987 Chevy Celebrity Eurosport (Google it) in favour of a new-ish car. For a kid in his 20s, I was thrilled to be driving a car with working air conditioning, a headliner that didn’t leak and a steering rack that wasn’t on the verge of giving out.

Anyway, I drove the Stanza for about a year before swapping it for a Chevy Beretta (Google it). I know – but I was young, and those cars were still considered cool in 1996. Despite not driving the Stanza for long, I really enjoyed my time with it. The cloth seats were comfortable, it was well kitted out and had good power for a daily driver of that era. And it didn’t give me a day of trouble. It was the epitome of a reliable 1990s sedan. A car of substance, if not style.

I relate this story because, despite their differences, the subcompact Versa reminds me of that old Stanza mid-size, and I mean that in the best possible way. Practical. Sensible. Functional. I thought the Stanza to be subtly handsome for its time, but it wasn’t a design exercise. Its intent was not to move you emotionally, but to do so literally. Form must follow function, not the other way around.

For as much as the Versa is a modern car that benefits from of a generation’s worth of advancements in automotive technology, it possesses a similar essence. That’s not to damn it with faint praise, either, but to highlight its virtue as a sensible small sedan. 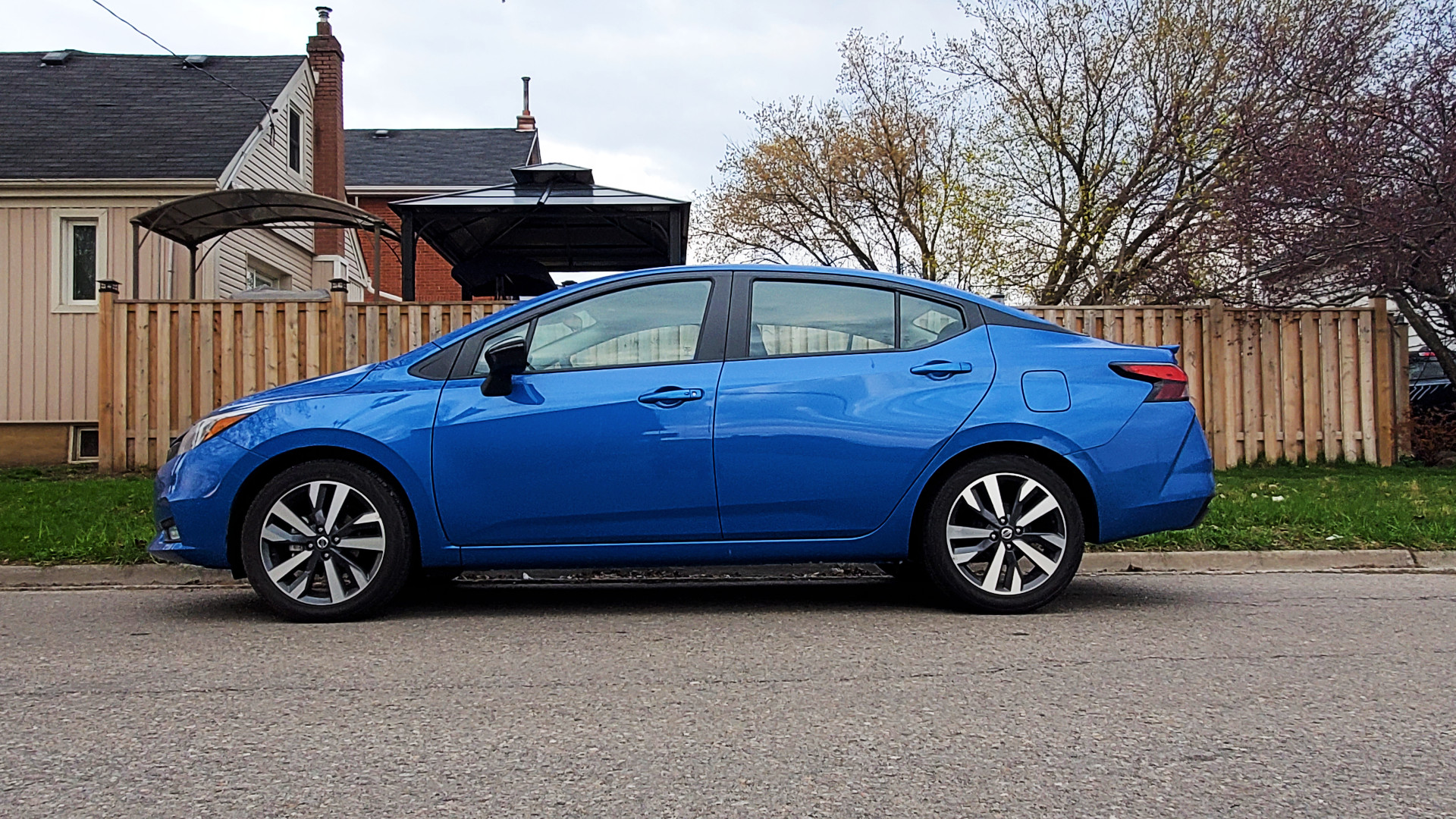 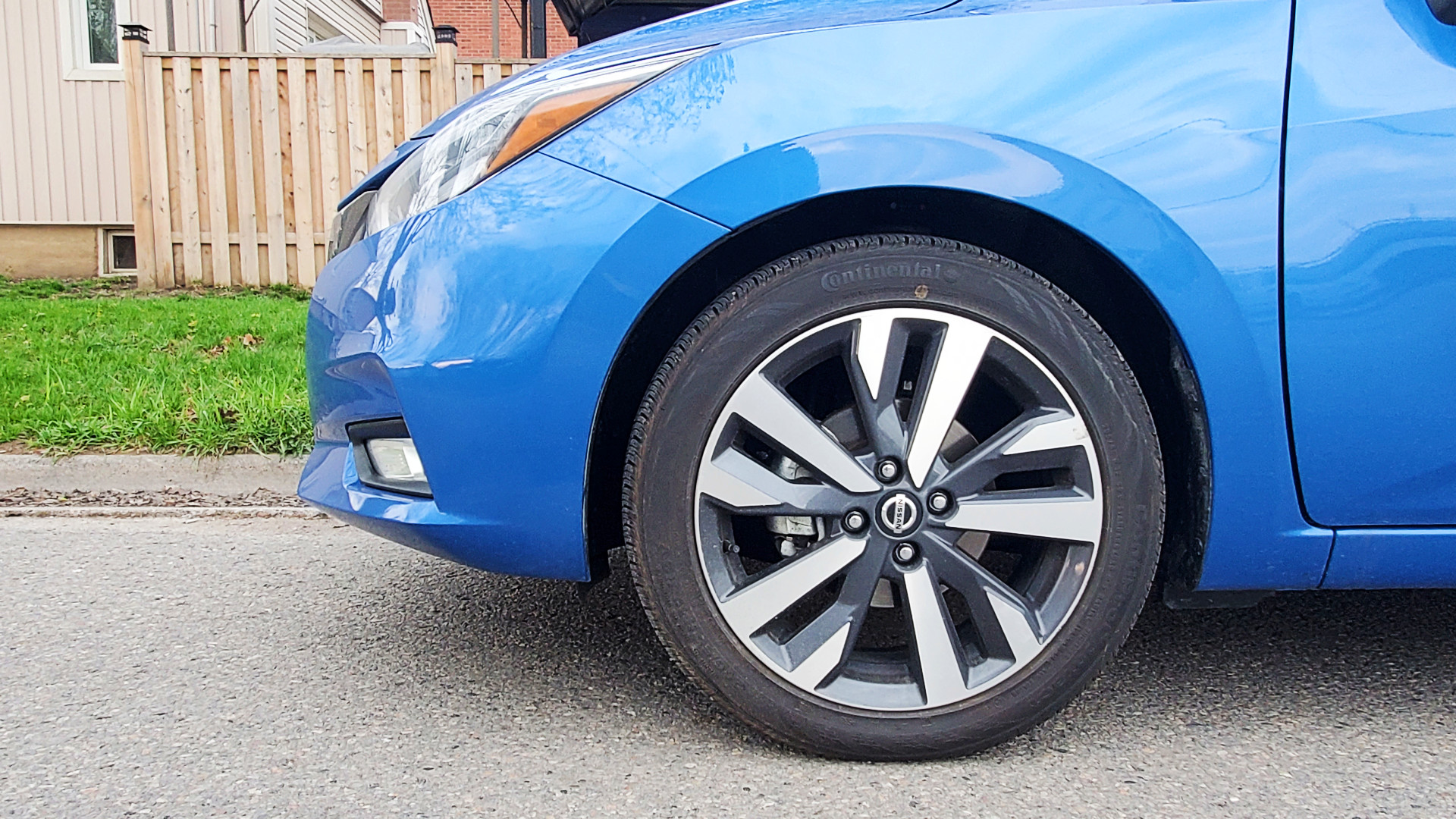 The 2021 Versa was revealed in the spring of 2019 and went on sale later that year as a 2020 model in U.S., Mexican and select global markets where it’s sold as the Almera This fourth-generation model is built on Nissan’s V platform, which is shared with the European-spec Micra (K14) and the Kicks crossover, and it bears a strong resemblance to the latter on the inside.

For Canada, the Versa is available in three grades: S, SV and SR. All are powered by a 1.6-litre four-cylinder engine (122 hp / 114 lb-ft) paired with a continuously variable transmission (CVT) that drives the front wheels. The base S grade can also be had with a five-speed manual.

My test vehicle for this review, courtesy of Nissan Canada, is a range-topping SR model finished in electric blue with a black sport cloth interior. The only option is a $135 paint charge, which brings the MSRP before taxes to $21,133.

The entry level end of Nissan Canada’s lineup now consists of the Versa sedan and the Kicks crossover (facelifted for 2021). The former is a two for one: Versa sedan in, Micra and Versa Note out. As mentioned, the Kicks and Versa are built on the same platform, but they also share powertrains and are assembled in the same Mexican plant. 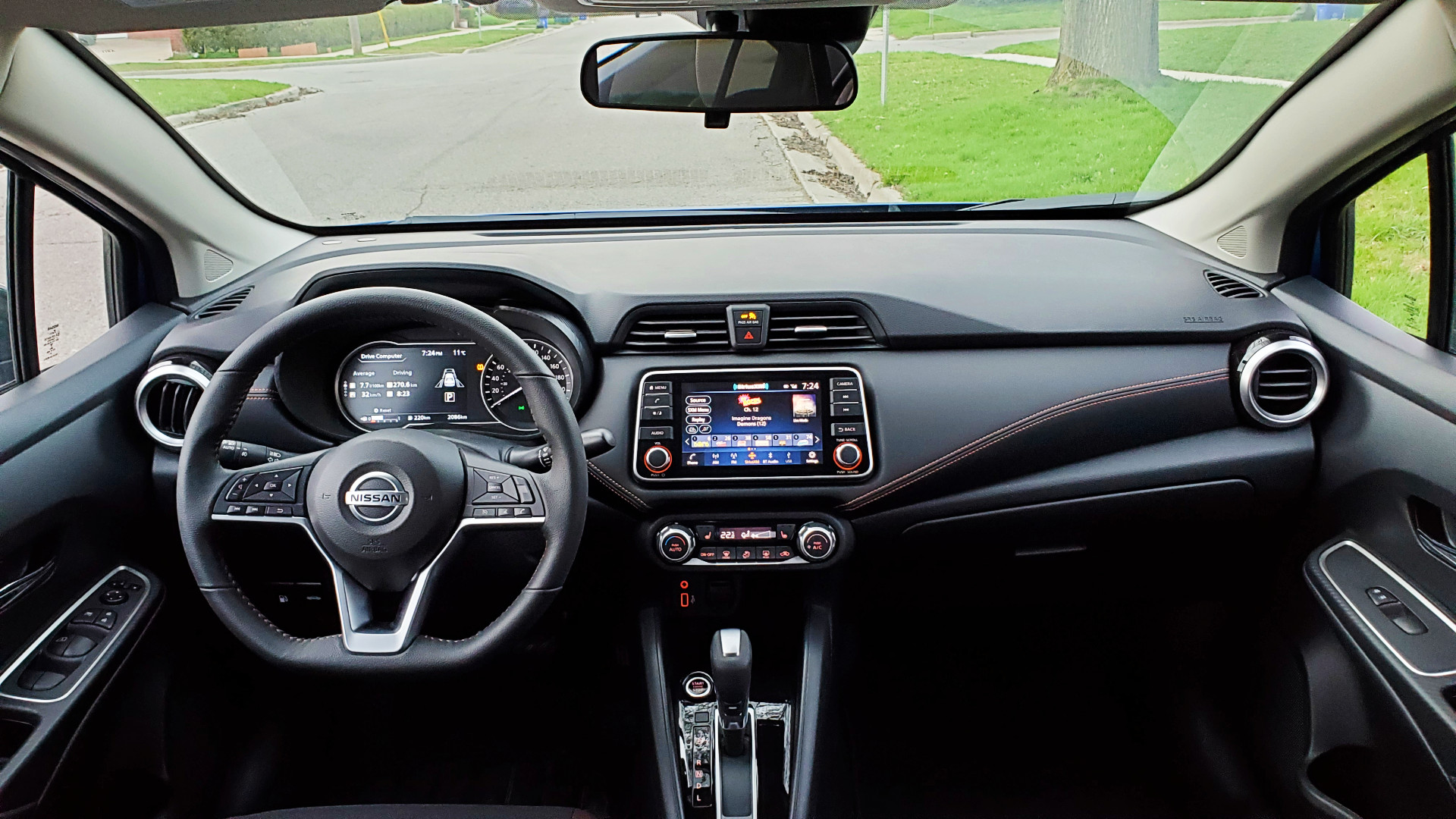 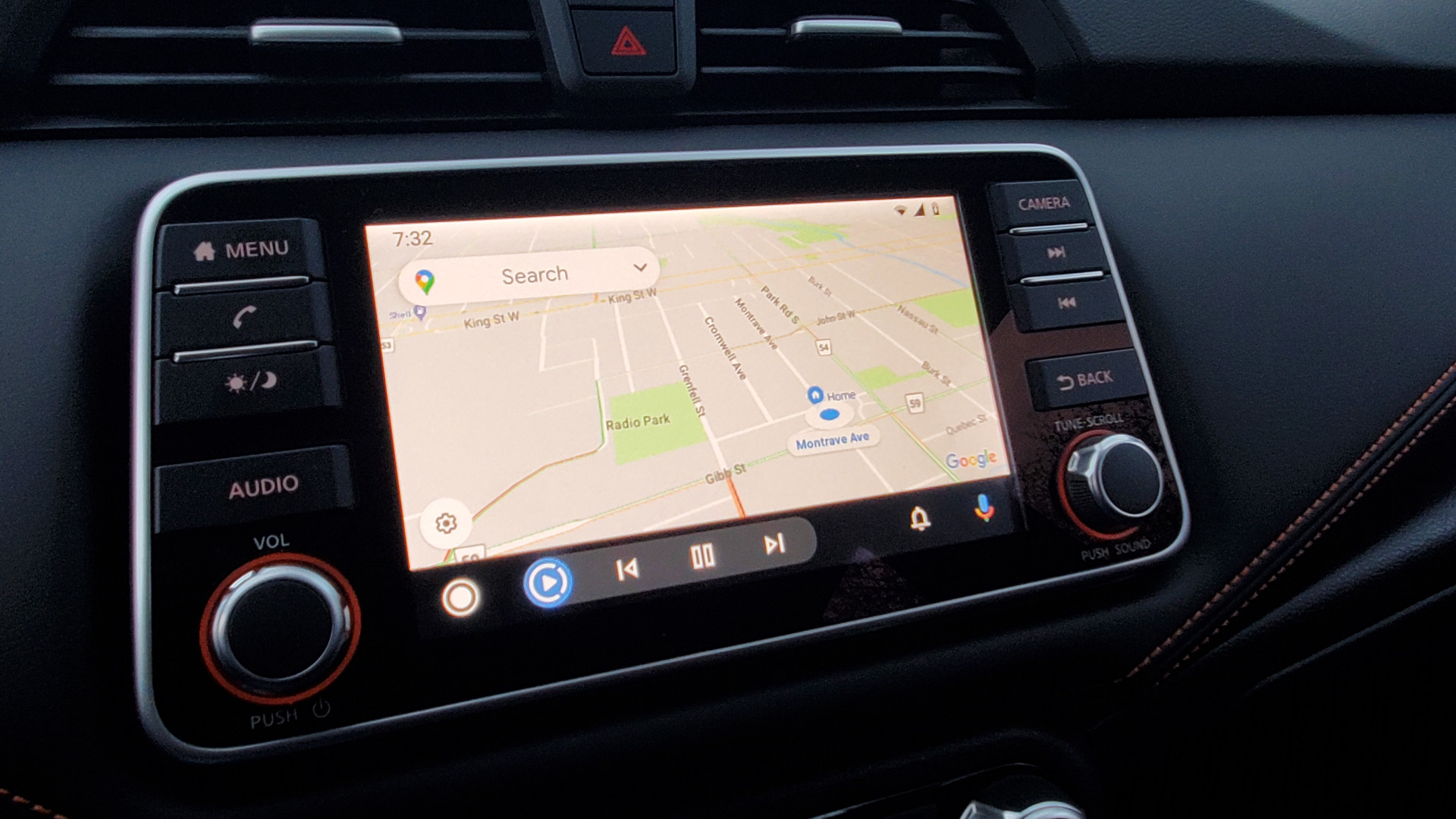 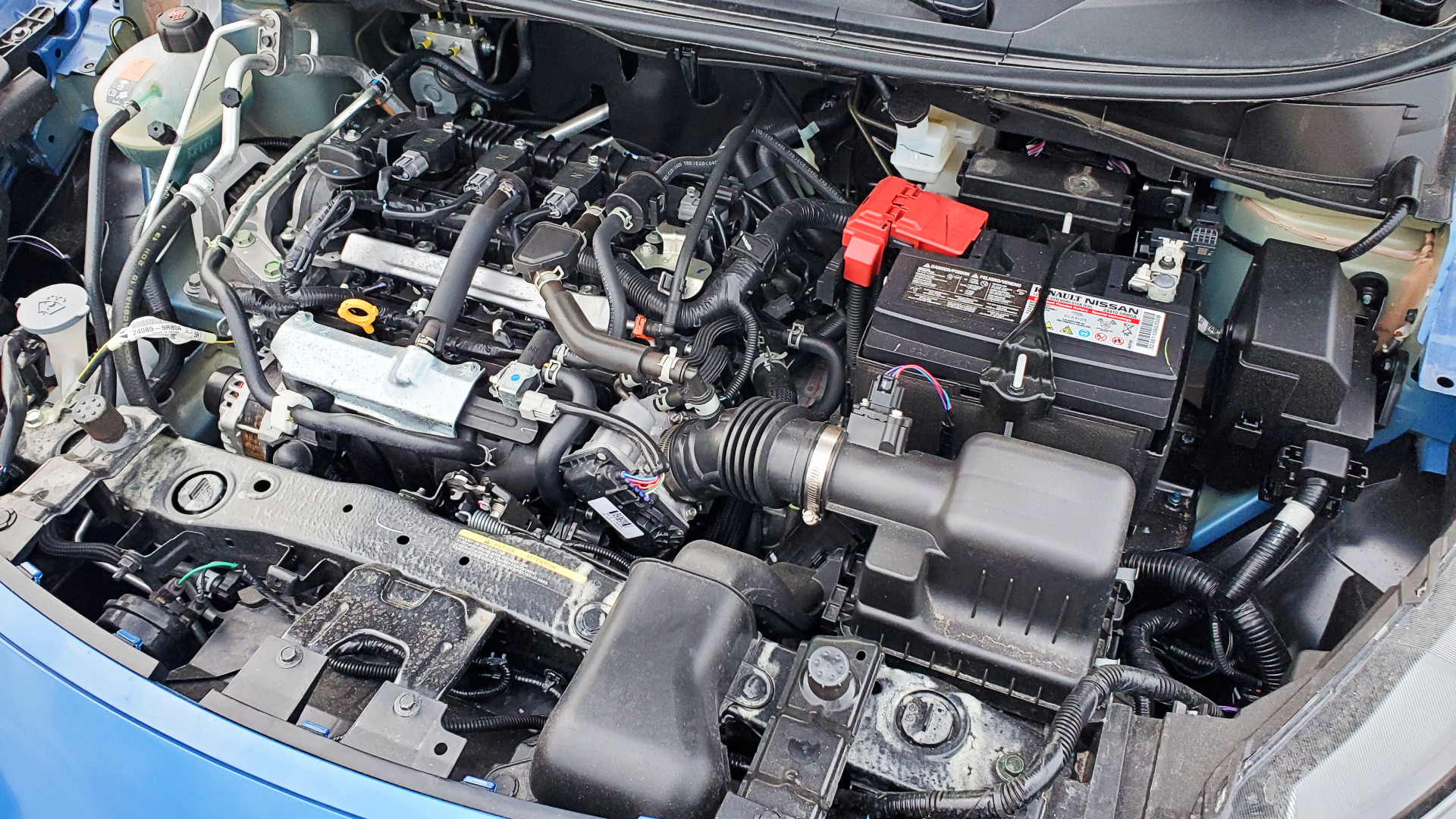 Despite being a somewhat cost-conscious model, the Versa is not exactly stripped down. Unlike its Versa Note and Micra forebears, it comes with a load of standard kit. Key among these is Nissan’s suite of safety tech known as Safety Shield 360. The offering is more robust higher up in the grade walk, but even the base S model with manual transmission ($16,498 MSRP) comes with front emergency braking with pedestrian detection, lane departure warning and rear emergency braking.

In terms of aesthetics, I’d say the Versa is handsome. Its shared design cues, V-motion grille, indent-shaped taillights and tapered C-pillars, unite it with the rest of the Nissan sedan family, despite having a narrower and more upright stance than the larger Sentra. Compared to its frumpy predecessor, the new Versa’s lines are sleek for a small car, especially in SR trim.

On the inside, the resemblance to the Kicks is quite striking, and not just in terms of design and construction, but also in space. The Versa is a spacious small car, both in front and in back. While it isn’t overtly wide, there are acres of head and shoulder room. I was surprised that my six-foot frame had so much room in a subcompact car. 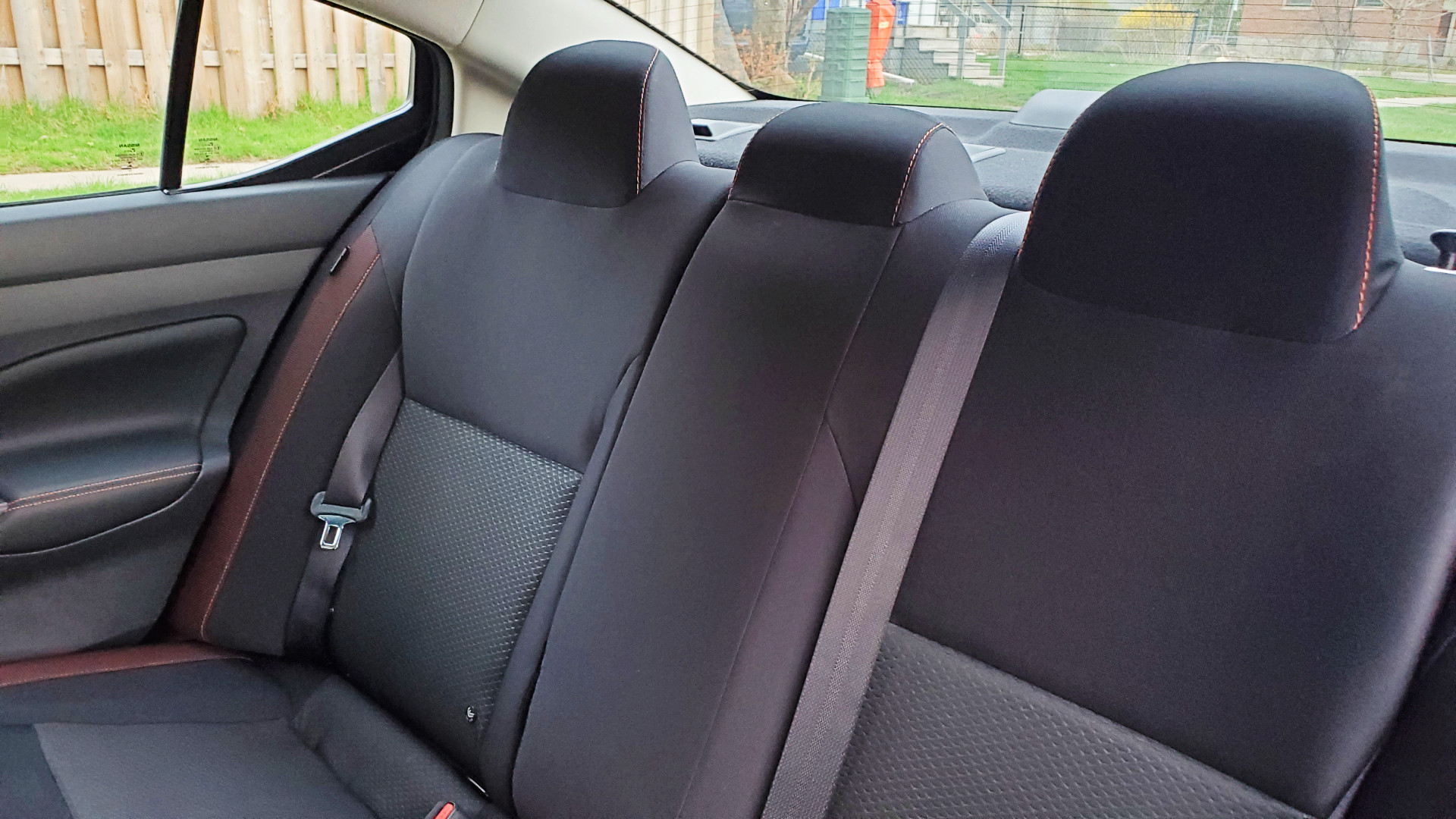 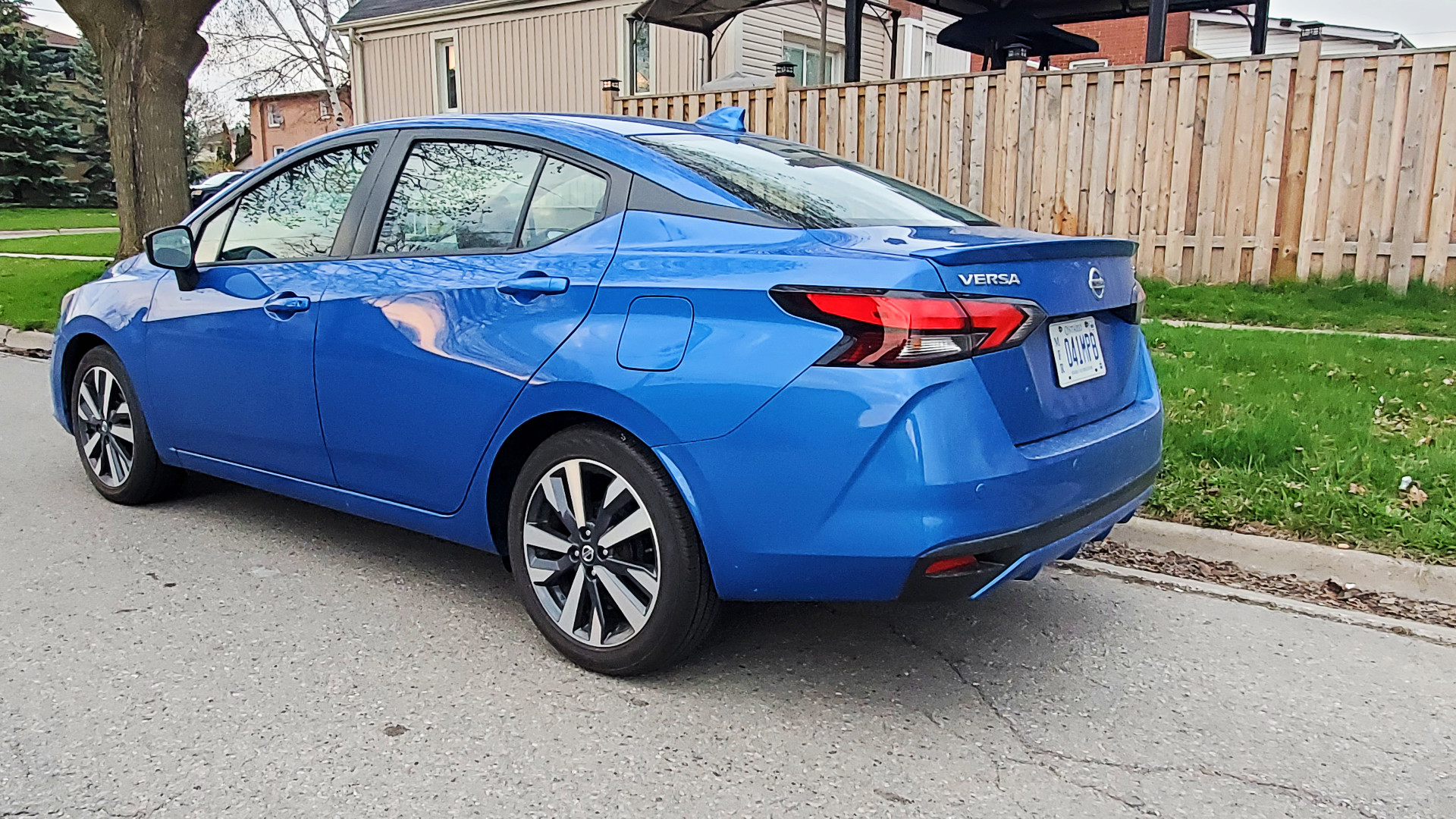 And it’s a nice place to be too, especially in the driver’s seat. The cloth seats are grippy with good support and the seating position allows for an excellent outward view. The materials aren’t the most expensive, but they feel right for a car in this price range, and everything is smartly designed. The switches and knobs operate with a smooth precision and are easy to use. My phone was paired throughout the test and the Android Auto integration worked seamlessly.

On the road, the Versa acquits itself well for a small car. The 1.6-litre four won’t knock anyone’s socks off, but it moves the car along well enough and it’s not excessively noisy or thrashy. The CVT isn’t a favourite transmission option, but the rubber-banding effect is kept at bay and doesn’t ruin the experience. As for the ride, it feels well-sorted and comfortable despite the Versa’s short wheelbase. On all but the roughest roads, it soaked up the undulations and bumps quite well. Of note, my tester was shod in winter tires.

In sum, the Versa is quite impressive. It’s a handsome small car that doesn’t have everything but has most of what one would want for a very attractive price. No, it doesn’t offer electrification, nor does it have the richest interior or much performance to speak of. But it has loads of space, including a 425-litre trunk, a high degree of advanced technology and doesn’t cost a fortune to operate.

Honestly, I think for most Canadians, especially those in urban environments, the Versa is an ideal car. Easy to drive, easy to park and easy to live with. Not flashy, not attention-seeking but ready, willing and able. A sensible choice. Much like the Stanza was a generation ago.