Polestar 2 arrives as the first all-electric rival to the Tesla Model 3, sharing strong Volvo design cues inside and out – but still some key missing features

Like an athletic child that eventually eclipses his marathon-running parents by making it to the Olympics, the Polestar brand is no longer a designation for top-line sporty Volvos, but a new-to-market upscale brand for 2021 that ostensibly becomes the sportier and plug-in only counterpart to Volvo. The all-electric Polestar 2 four-door is now the new brand’s bread and butter, and the first all-electric rival sedan to the market-dominating Tesla Model 3, the best-selling EV in Canada by far – and also the top luxury sedan seller overall in the first half of 2021, per sales site goodcarbadcar.net.

A fact that surely has BMW 3 Series, Mercedes-Benz C-Class and Audi A4 marketers wondering where this electric punch came from, given the Model 3 only hit the market in 2018.

Polestar is hoping for similarly quick acceptance for the Sino-Swedish brand. Its design and engineering done in Sweden along with other Volvo products, but the Polestar 2 is built near Chengdu, China. Both Volvo and Polestar are owned by the Chinese Geely Auto Group, along with Lotus Cars, with Polestar sharing a close design ethos inside and out (headlights and interiors, especially) with its Volvo corporate cousin. 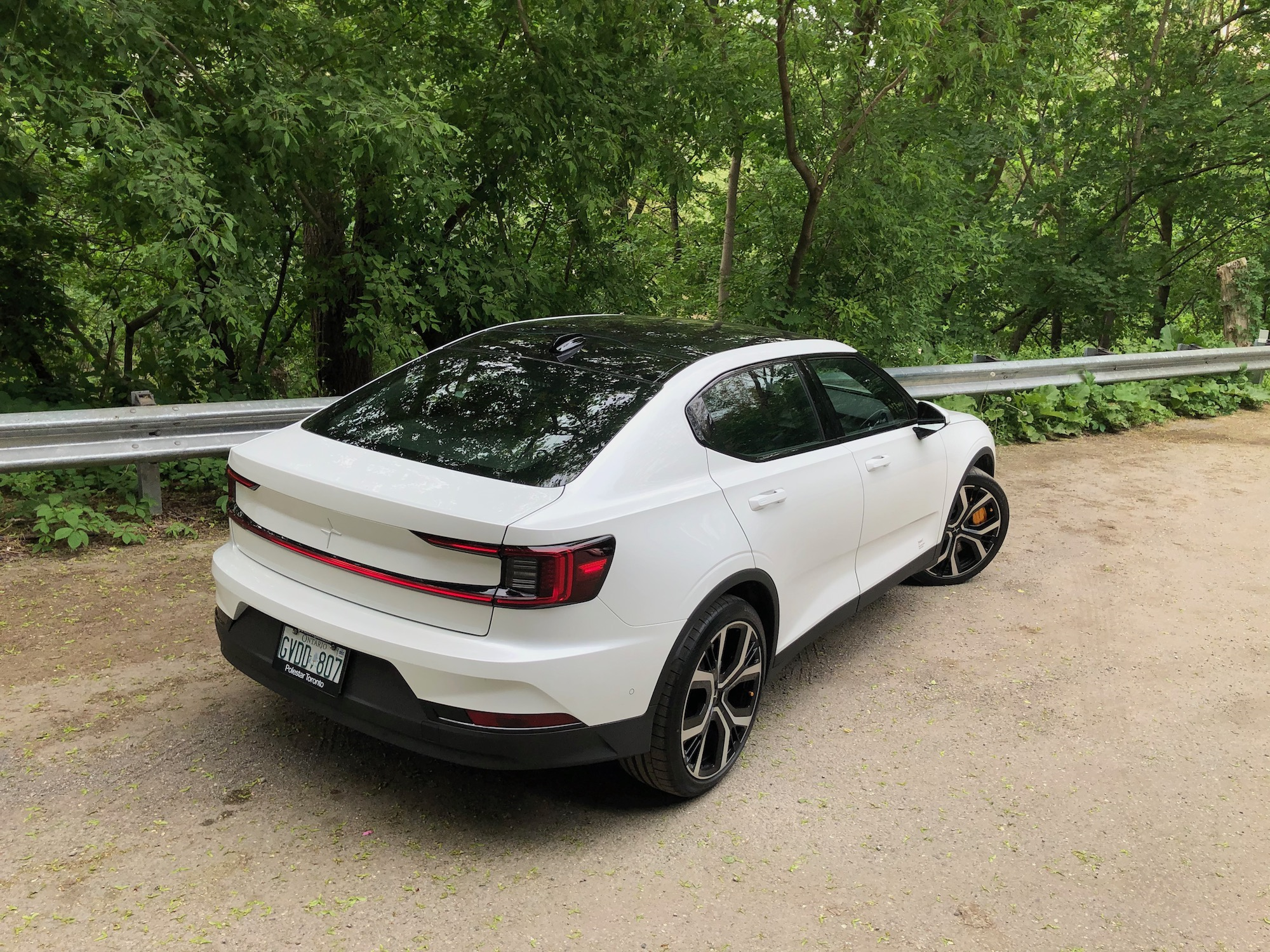 The Polestar 2 currently starts at $69,900, meaning it’s too expensive to receive any government clean car rebates, though Polestar decided to come out with fully loaded, more powerful, all-wheel drive models first. The brand has announced that lower priced and less-equipped single motor front-wheel-drive models will be available by the end of 2021, but hasn’t yet priced them in Canada. 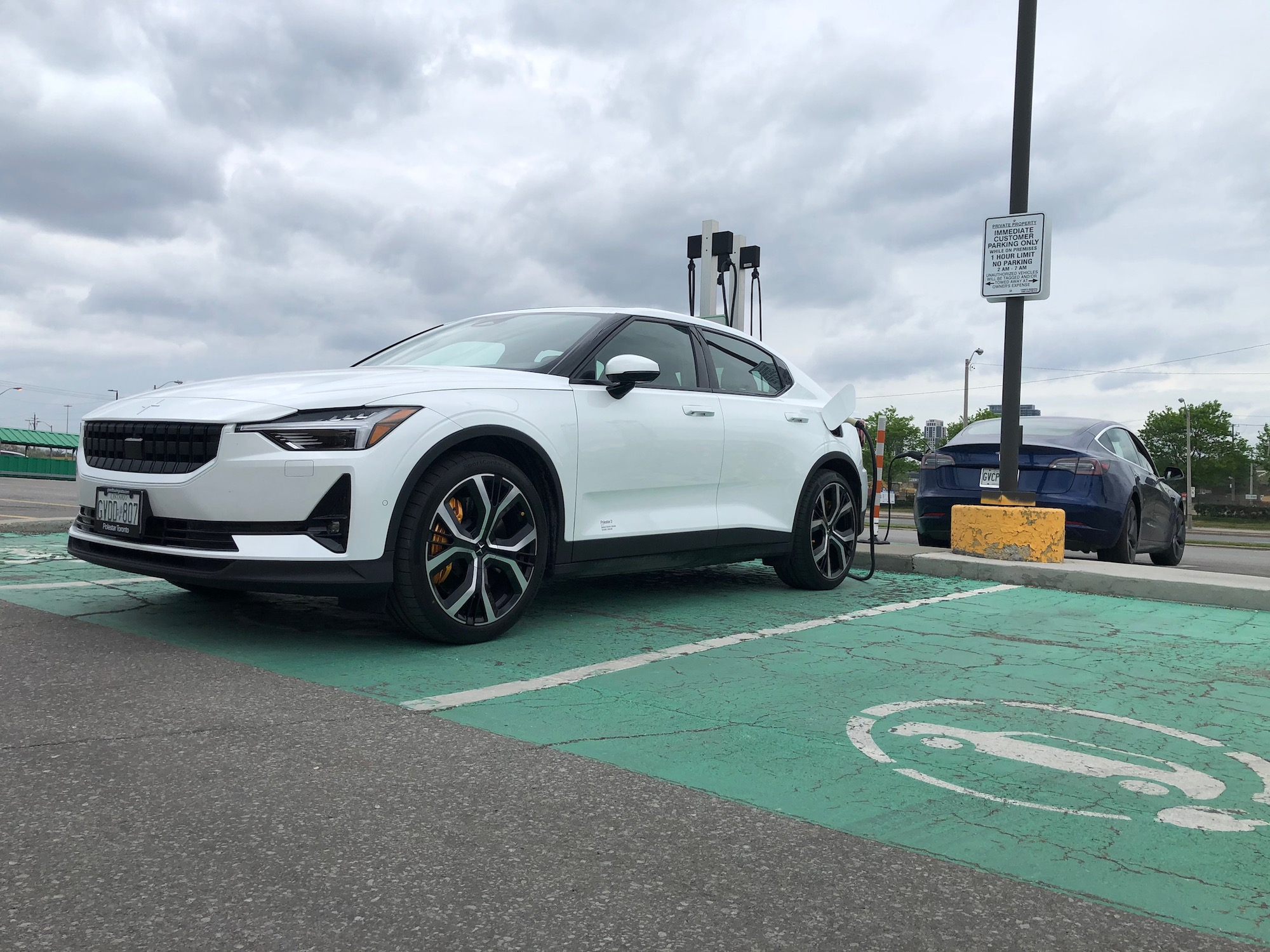 This particular top-line Polestar 2 tester included the $6,000 Performance package and special paint, bringing its as tested price after freight to $79,000. Yet the all-electric powertrain is the same as in all Polestar 2 models, as well as that found underneath the Volvo XC40 Recharge compact SUV. The Performance package is more visual than dynamic, as it adds golden yellow Brembo brake calipers, seatbelts, different 20-inch wheels, and special adjustable Öhlins dampers (only manually adjustable), but with the same exact 408 hp and 486 lb-ft of torque figures all around.

Those are still very healthy power figures, offering a 0-100 km/h dash time of 4.4 seconds, with enough neck-stretching torque to convince any first-time or even sceptical EV passengers that major oomph does not need to come with a major (or any) internal combustion racket.

Yes, some enthusiasts may miss the occasional rev-happy run to redline, but the Polestar 2 makes previously smooth luxury car engines seem like lumpy tractor motors. In comparison, the whisper smooth and silent every day driving demeanour of this Polestar 2 quickly conveys a sense of refined quality and futuristic luxury, even if you occasionally feel this car’s hefty 2,123 kg mass from the wheel. 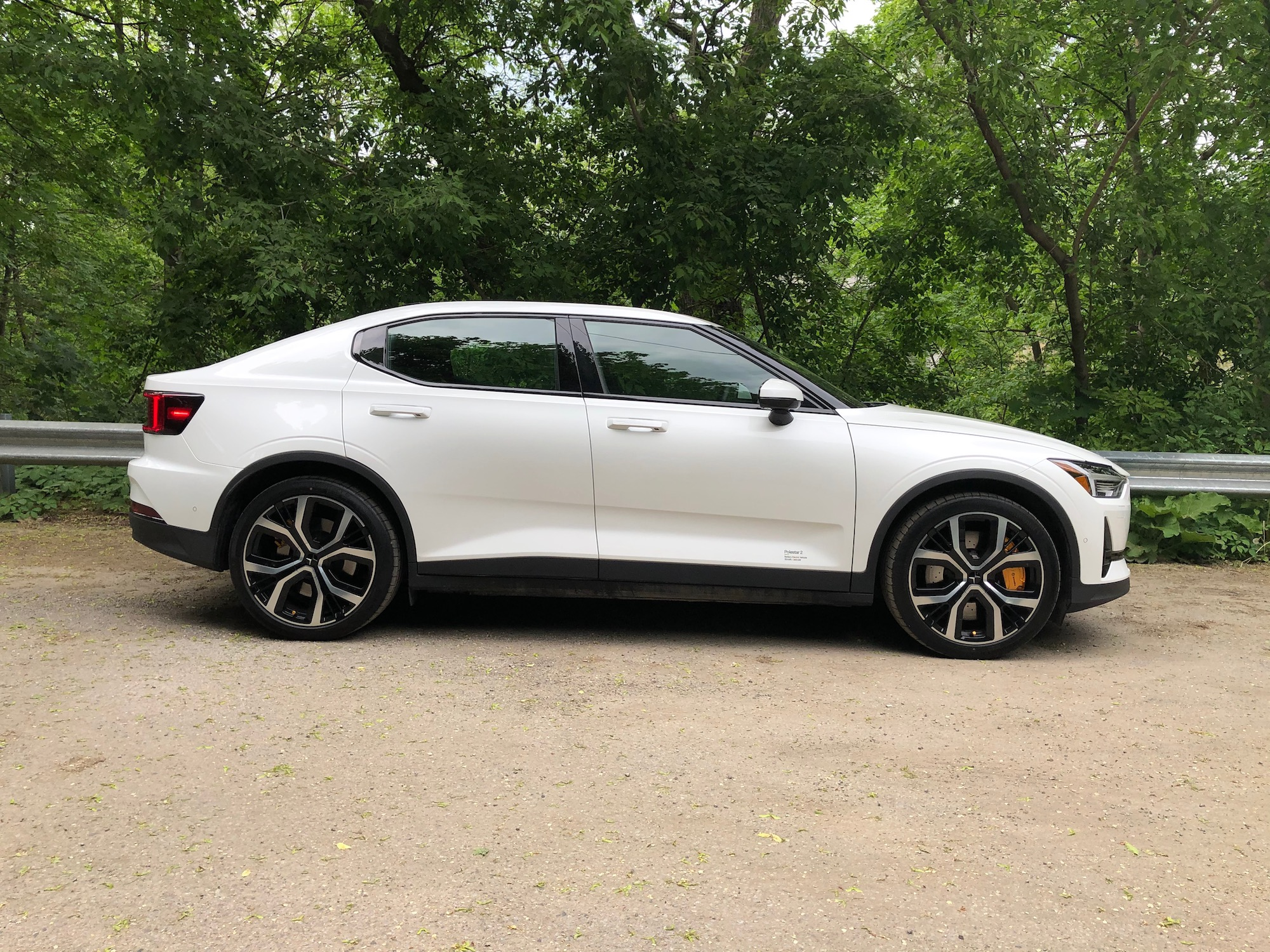 This feeling of quality and future-appeal persists inside as well, with a darkly business-like interior that seems well put-together, with a huge Volvo-mimicking vertically-oriented screen.  It doesn’t feel quite as luxurious as some others in this price range, in part because of the dark ash wood here and fabric vegan seats that puts Nappa leather and cooling to the options list. But the gold seatbelts added a splash of fun colour, and its driver’s side digital screen gives it a more conventional and arguably easier view for the driver than its main central-screen-only BEV rival.

One of the Polestar 2’s major claim to fame is that it was the first to be powered by the Android Automotive OS, and that it can perform over-the-air updates to help improve the system, and vehicle. As an iPhone user, I wasn’t sure how nicely this Google-based system would work for me, and over a week, the short answer is okay, but not great – yet. When walking up to P2 and listening to a podcast, it quickly picked it up. With the fob in your pocket, there’s no Start button that needs pushing to wake up the car. But there’s no Apple CarPlay, and no matter what phone you use: no satellite radio stations, no AM radio, and not even digital versions of those AM stations, as in most other AM-less electric cars. 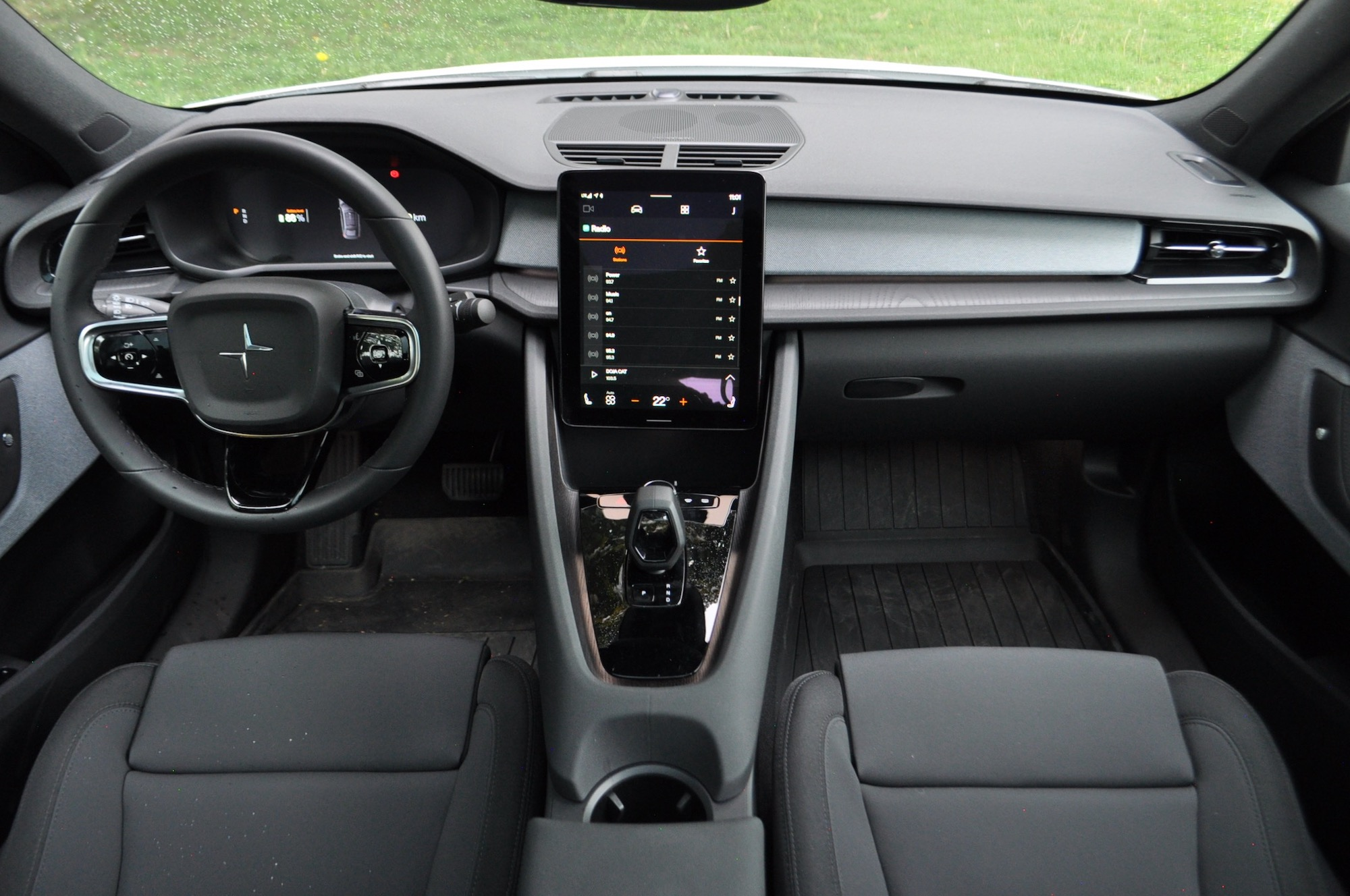 This latter would be a deal breaker for me – my $80k new luxury car doesn’t offer AM radio? Sports and local talk radio fans will be out of luck here, unless they can find them digitally on apps, which may not be as easily or quickly accessible, but at least may be static-free.

That may again be easier for Android than Apple users at the moment. Yes, there’s an iHeart Radio app integrated in the dash, just like on my iPhone, that has at least a few of those AM stations, but I couldn’t connect the accounts. It’s possible that’s because this was a U.S. vehicle tester or the vehicle app (or both); and there’s apparently a RadioCanada Player app available as well that offers others.

Free lifetime over-the-air updates have been a customer pleaser with Tesla, and Polestar will offer them as well, which will hopefully help fill these surprising infotainment gaps. It may also help with the occasionally finicky wireless phone charging I experienced, which is doubly important for phones that use the traditional USB connectors, as the Polestar comes with four modern USB-Cs (two per row) and a ‘cigarette lighter’ receptacle in the back.

From an EV perspective, the Polestar 2 ’s official range is 375 km, though once I filled it to its 100 per cent maximum, it predicted an estimated 410 km of range, or 400 with the auto climate control on (Polestar recommends 90 per cent to maximize battery life). Its 375 km official range estimate from the 78 kWh battery is closer to what the recommended 90 per cent charge will provide, with its notchback sedan body providing less frontal area and a more steeply sloped windshield that helps give it a surprising 40 km range edge over the Volvo XC40 Recharge’s official 335 km figure. New buyers will also benefit from a new heat pump that became available this spring, which can improve range up to 10 per cent, said Polestar, especially between five and 15 degrees Celsius. When on road trips or further from home, DC quick charging speeds are rated up to 150 kW, though if you’re a regular long-distance traveler, it’s clear that there are longer range and quicker charging EV options out there.

Speaking of the Polestar 2’s body, its hatchback rear opening is handy for loading large objects, but still looks more like a traditional three-box sedan. That opening is also a reminder of how much more practical a wagon version of this car could be, in fine Volvo tradition, though there is also more storage space up front in a semi-divided frunk. 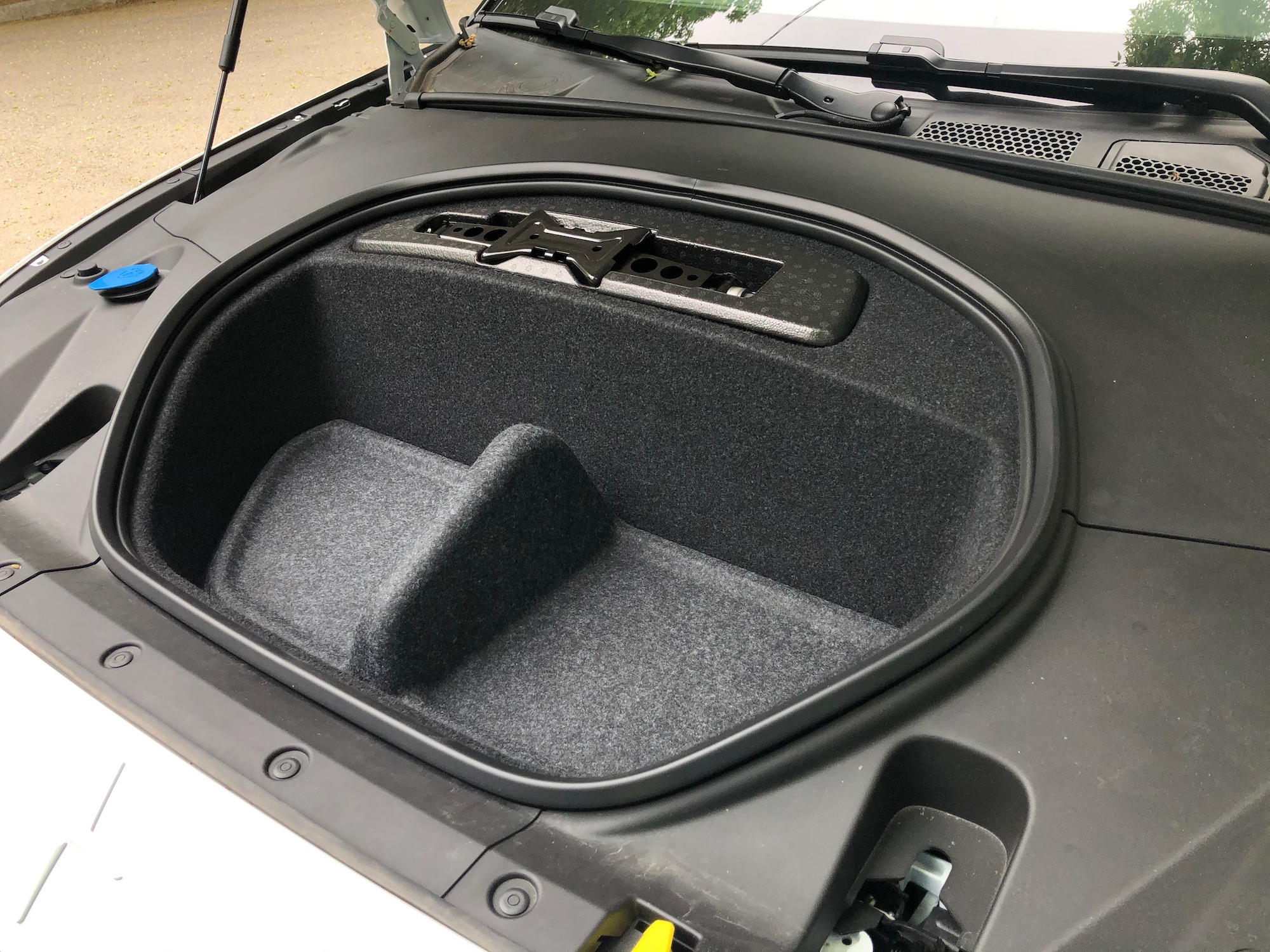 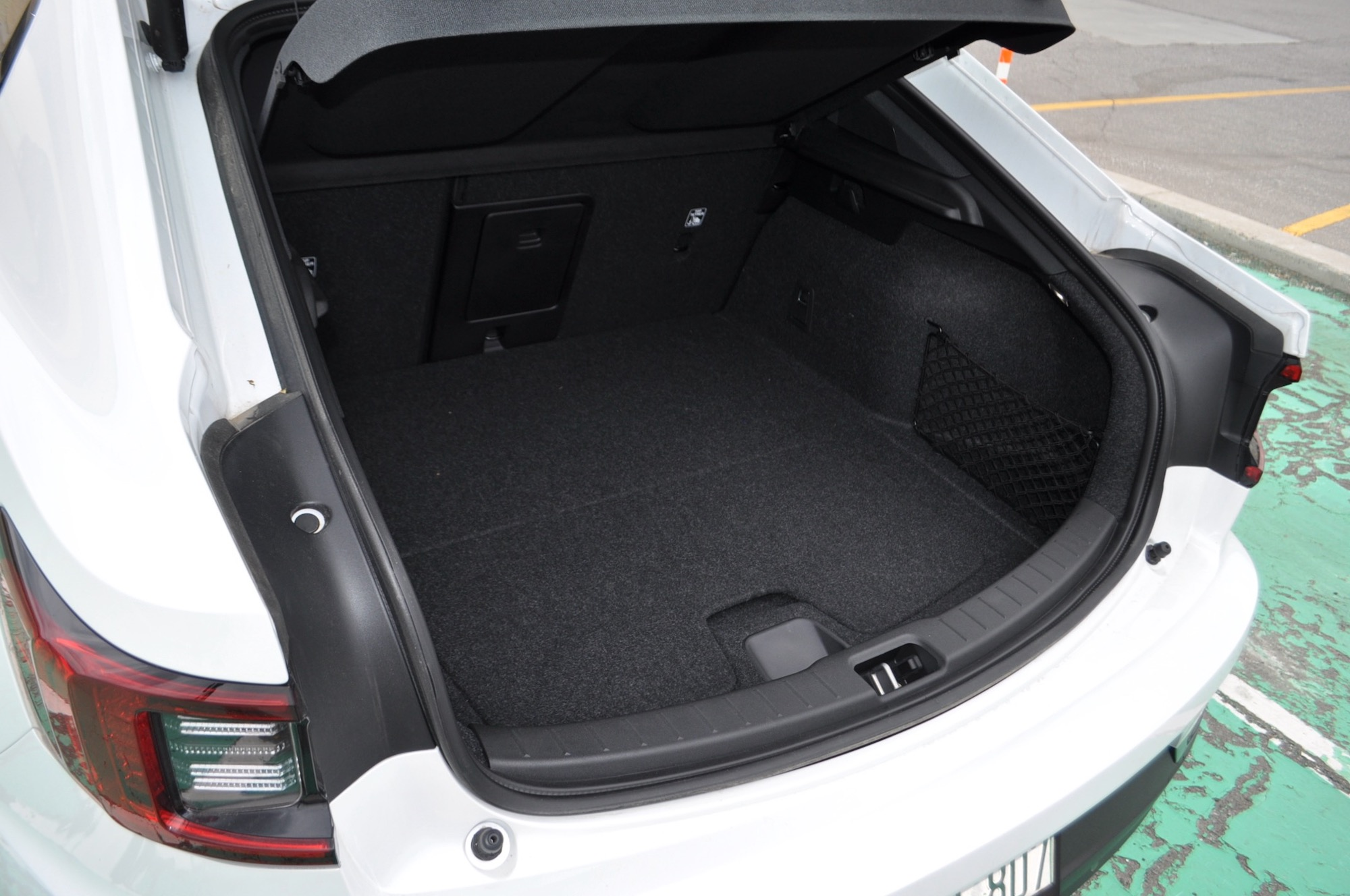 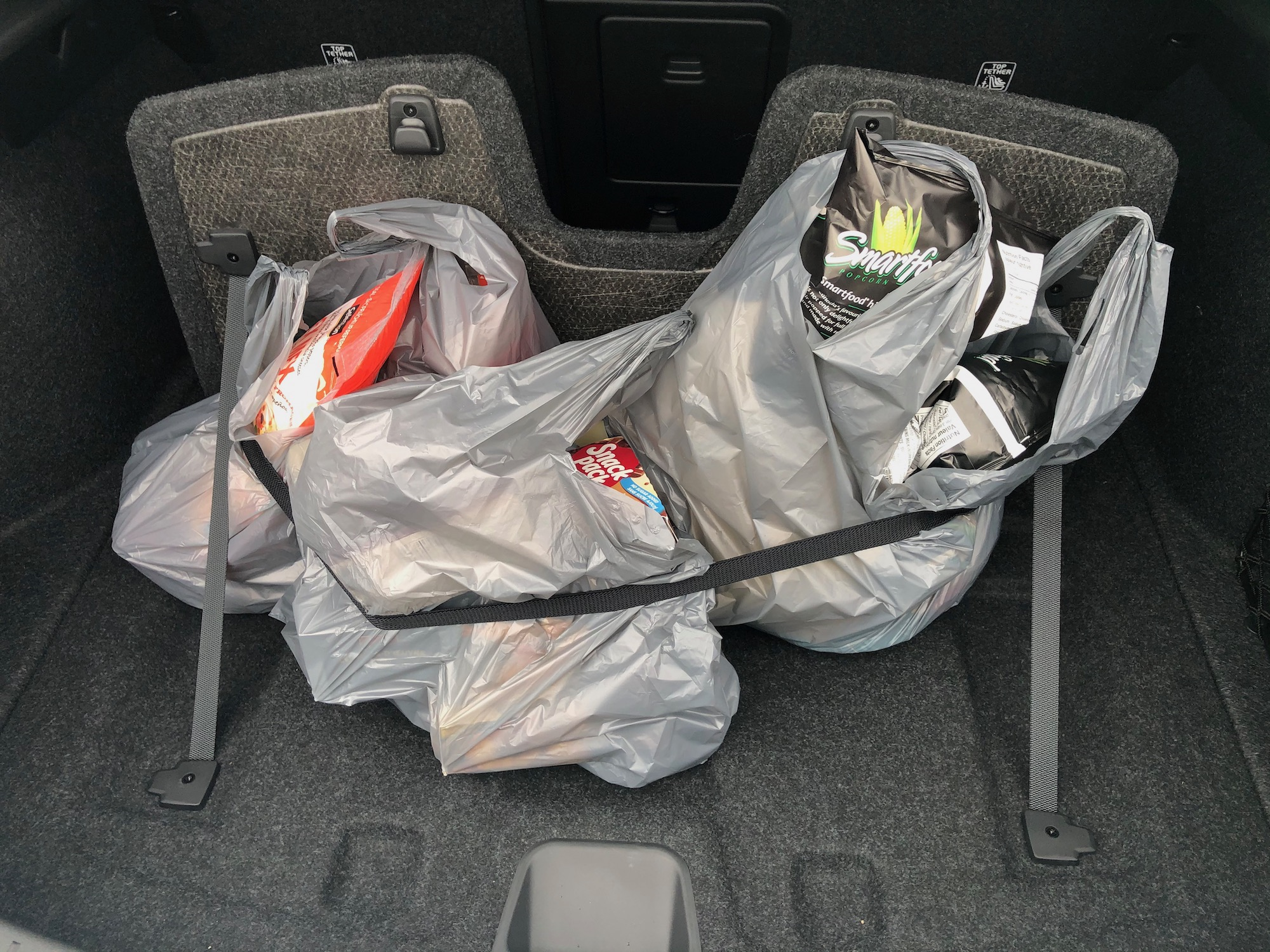 But what impressed me most was the actual trunk’s folding shopping bag holder, which consisted of a panel that could be quickly raised to expose a series of integrated bungee cords, allowing drivers to quickly drop in shopping bags to prevent them and their contents from rolling around – and potentially down your driveway.

In the end, the Polestar 2 is a premium priced sports sedan in a market dominated by the Model 3, but soon to meet competition from the BMW i4 that will arrive in early 2022, both of which offer more power and range for a similar starting price for their top-line mid-$70k performance models. There are only three current Polestar Spaces (dealers) in Canada, but like the heat pump added recently and the upcoming lower priced versions, as well as the updated infotainment features promised for the Polestar 2, there may be more value to come for interested Polestar buyers.

PRICE: $79,000 (including destination fee and options, not taxes)