The sportiest Cayenne returns, this time with eight cylinders.

These days, it’s exceptionally rare to see an automaker adding cylinders to anything.

If that statement piqued your interest, you may wish to take a closer look at the Porsche Cayenne GTS, either in its traditional form or the relatively new Coupé model shown here.

If you can afford a vehicle in the price range of the 2021 Porsche Cayenne GTS Coupé – this one rings up at $157,920 with destination charges, including $3,590 to apply the special Carmine Red exterior colour – one presumes you have friends who can afford more traditional high-end sports cars. Don’t let them make fun of you for suggesting you might bring this thing to one of their track days. Take a look at these credentials: a top speed of 270 km/h, a three-chamber air suspension that takes the GTS 30 mm lower than standard Cayenne models, and an available upgraded torque vectoring system and rear-axle steering for improved handling. Not only is the Cayenne GTS more than capable of performing up to snuff, but because we live in Canada, the track is the only place where you’d truly be able to take it anywhere even remotely approaching its limits. 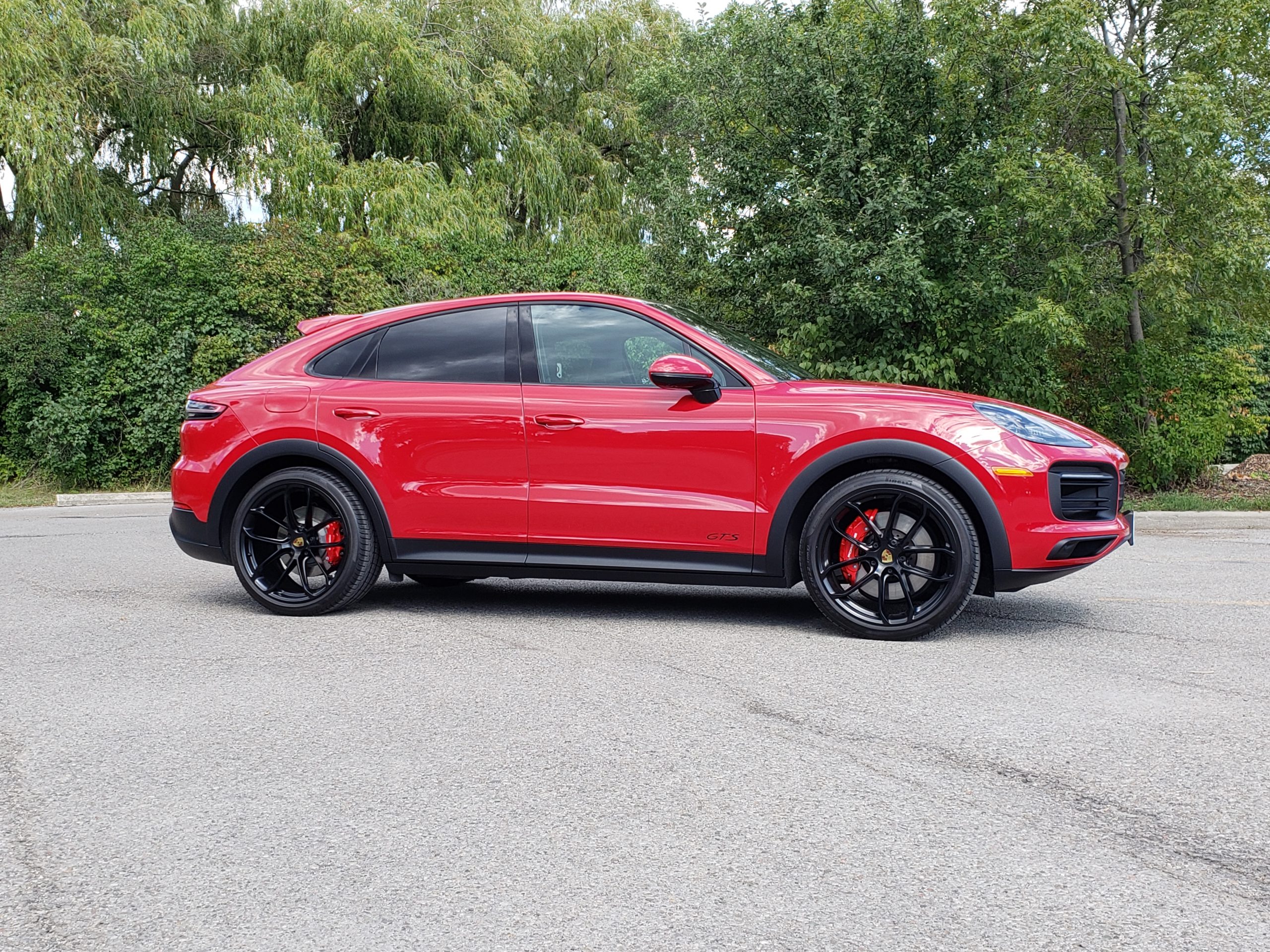 It also happens to be loud. Very loud. With raucousness aided by a sports exhaust system with gloss black centred tailpipes – part of a nearly $20,000 package that also adds a carbon fibre hood, 22-inch wheels, and 18-way adjustable sport leather seats with very cool throwback houndstooth-like fabric inserts, among other features – this car makes enough of an aural impact that even my muscle-car-loving neighbour complained. Do with that information what you will.

You can also expect to pay for the GTS at the pumps. The Cayenne GTS Coupé is estimated to burn an average of 14.0 litres of premium fuel per 100 kilometres combined, which is slightly less than my observed average of 14.3 L/100 km.

If you’re looking at the Cayenne Coupé, consider the benefits and drawbacks. Opting for the sloped roof line versus the Cayenne’s traditional design means giving up some rearward visibility and just under 150 litres of rearward cargo capacity: the Coupé has 625 litres to the original’s 772 litres. In exchange, you trade fashion for function and get a roof line that could almost, maybe, be accused of somewhat resembling a 911. No one is going to mistake one for the other, of course, but if there’s any case to be made for giving an SUV a coupé cut in the name of appearances, Porsche’s got the clearest rights to it. You’ll pay a $4,300 premium over the regular Cayenne GTS for this privilege. 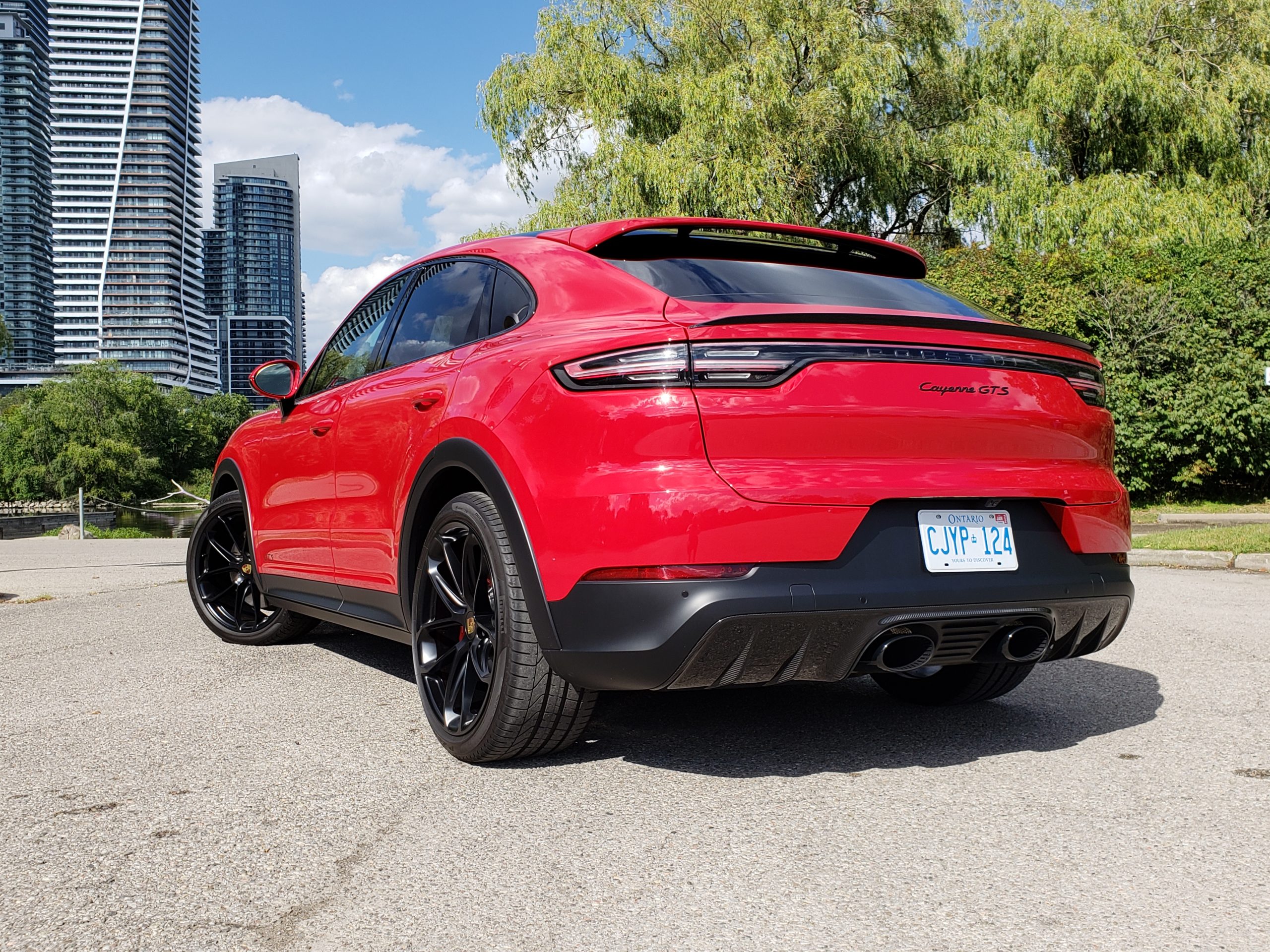 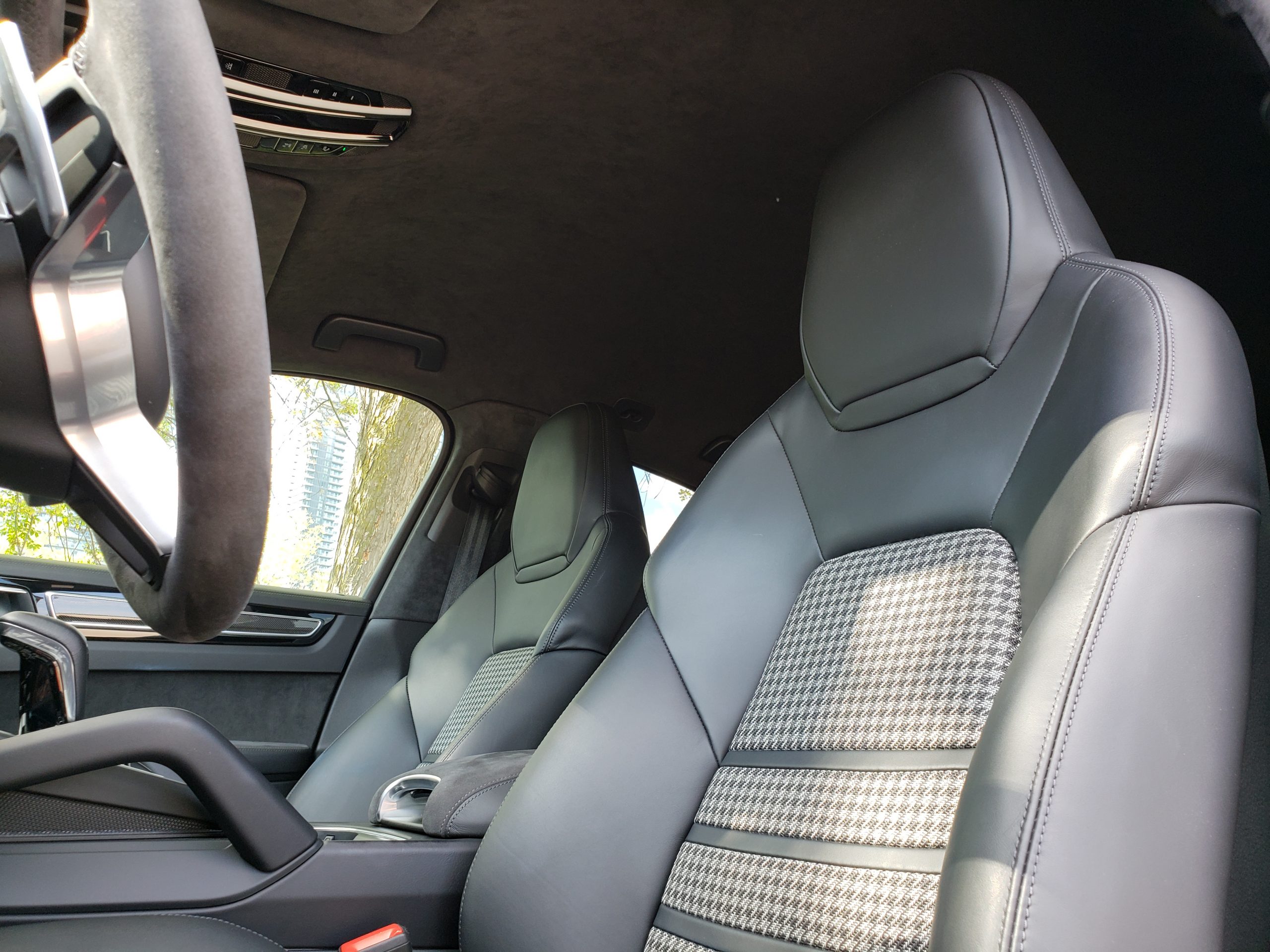 Porsche’s approach to tech has come a long way in recent years. The current generation of infotainment system is more user-friendly than past iterations with a tiled home page and menus that pop up when a hand is brought in proximity to the correct section of the screen. There are also plenty of hard controls for frequently used functions, though they’re not buttons per se: they’re touch-sensitive divisions on a large, piano black single-pane layout that surrounds the centred traditional shifter. This looks beautiful, but it does take some focus to locate and press to activate functions one might use less frequently. More importantly, the volume dial is positioned directly behind the shifter, which makes it awkward to reach. And features you don’t pay for aren’t missing entirely: you can still see the symbols, they’re just not backlit. If you opt not to pay for the ventilated front- and second-row seats, for example – which aren’t offered on this precise interior regardless – you catch a glimpse of where they should be from time to time, and it adds a bit of insult to injury. So does having to use a cable to charge a smartphone if you don’t opt for the $780 wireless charger, for that matter, though at least wireless Apple CarPlay and wired Android Auto are both included at no extra cost. 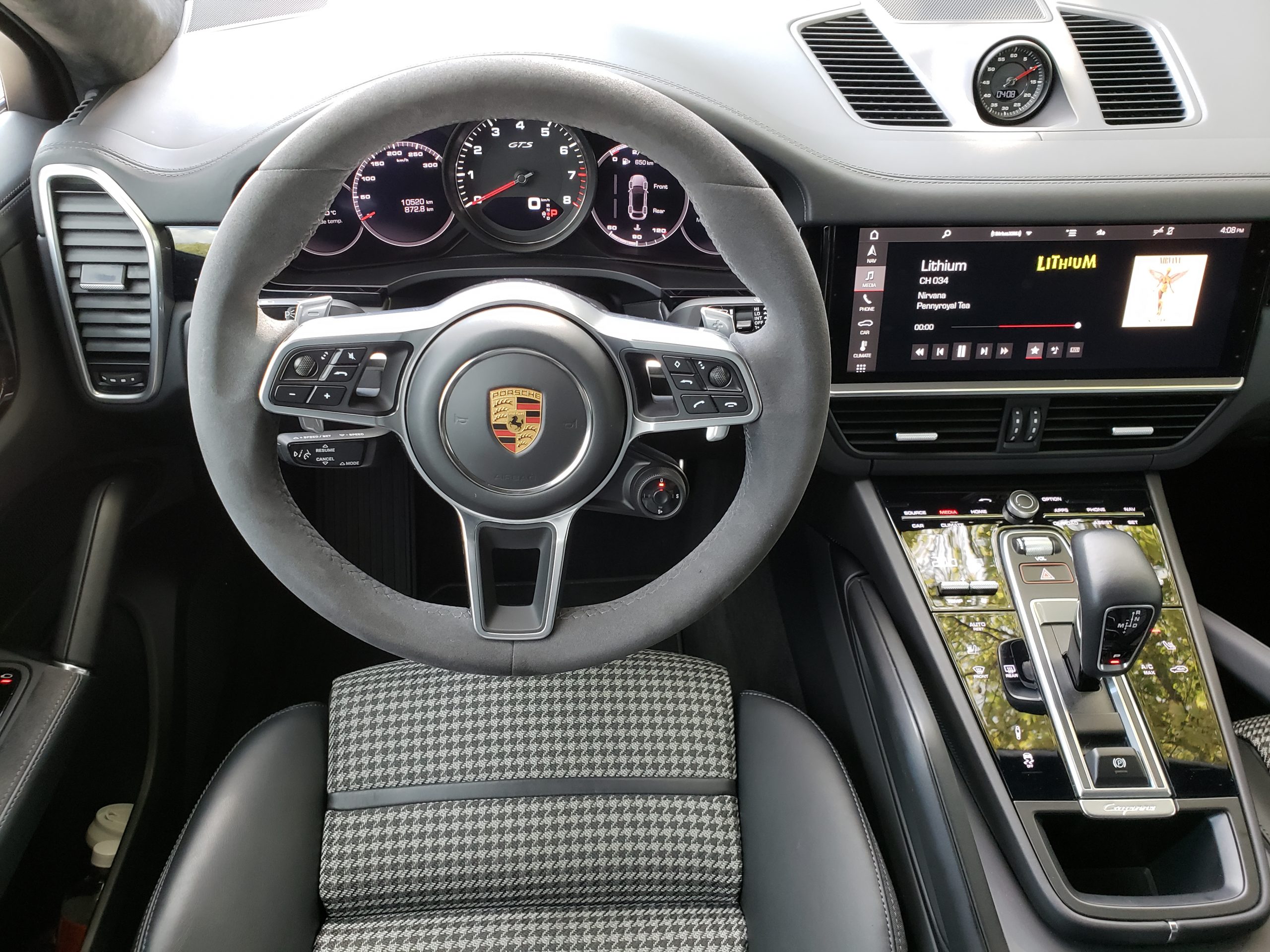 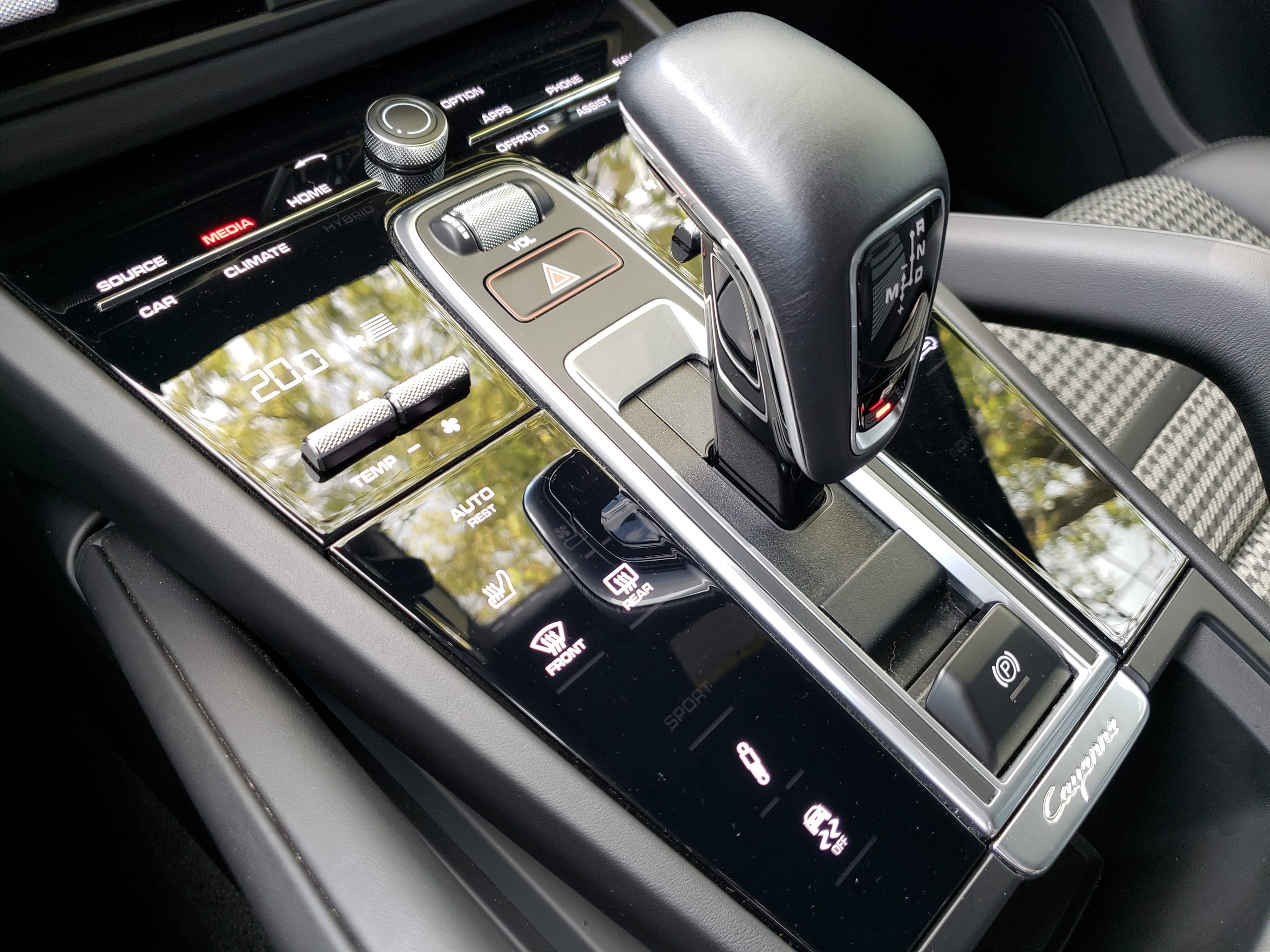 Of course, part of the appeal of buying any Porsche is the ability to equip it precisely to one’s own specification. Both versions of the Cayenne GTS permit this in spades, from a full slate of wheels, interior colours and finishes, seat styles, technology add-ons, and even a list of safety features to be selected one by one. This isn’t automotive fast food; it’s a fine dining menu that one is meant to peruse at leisure.

Since there’s likely little brand cross-shopping against this vehicle – though the BMW X6 is worth a look from those not drawn here purely by brand cachet – the real question is whether to opt for the coupé versus the classic Cayenne, and the GTS versus other grades. Both are somewhat niche offerings that come with a degree of letting preconceptions go in the name of getting that ideal-in-every-way vehicle. If fashionable looks and peak drive dynamics are important to you, but you don’t really need the power bump that comes with going all the way to the Turbo – and let’s be honest: you live in Canada, so you almost certainly don’t – then the Cayenne GTS Coupé may well be your version of just right.