If it ain’t broke… maybe update the drivetrain anyway.

In the year 2021, the Toyota 4Runner TRD Pro is an absolutely oddity of a vehicle. For a kick-off, it’s heinously outdated. How outdated? Literally somewhere between smoking on an airplane and “Gangnam style”.

The current 4Runner is still based on the fifth-generation chassis, first introduced in 2009 and built in Japan at Toyota’s plant in Tahara, Aichi. Which means, even at the high-end TRD Pro trim level, the 4Runner utilizes a positively ancient drivetrain — a massive and lazy 4.0-litre V6 matted to a 5-speed automatic transmission.

The TRD Pro package was introduced in 2014 for the 2015 model year and upgraded the chassis with Bilstein shocks with remote reservoirs, TRD-tuned front springs and a variety of off-road accessories. 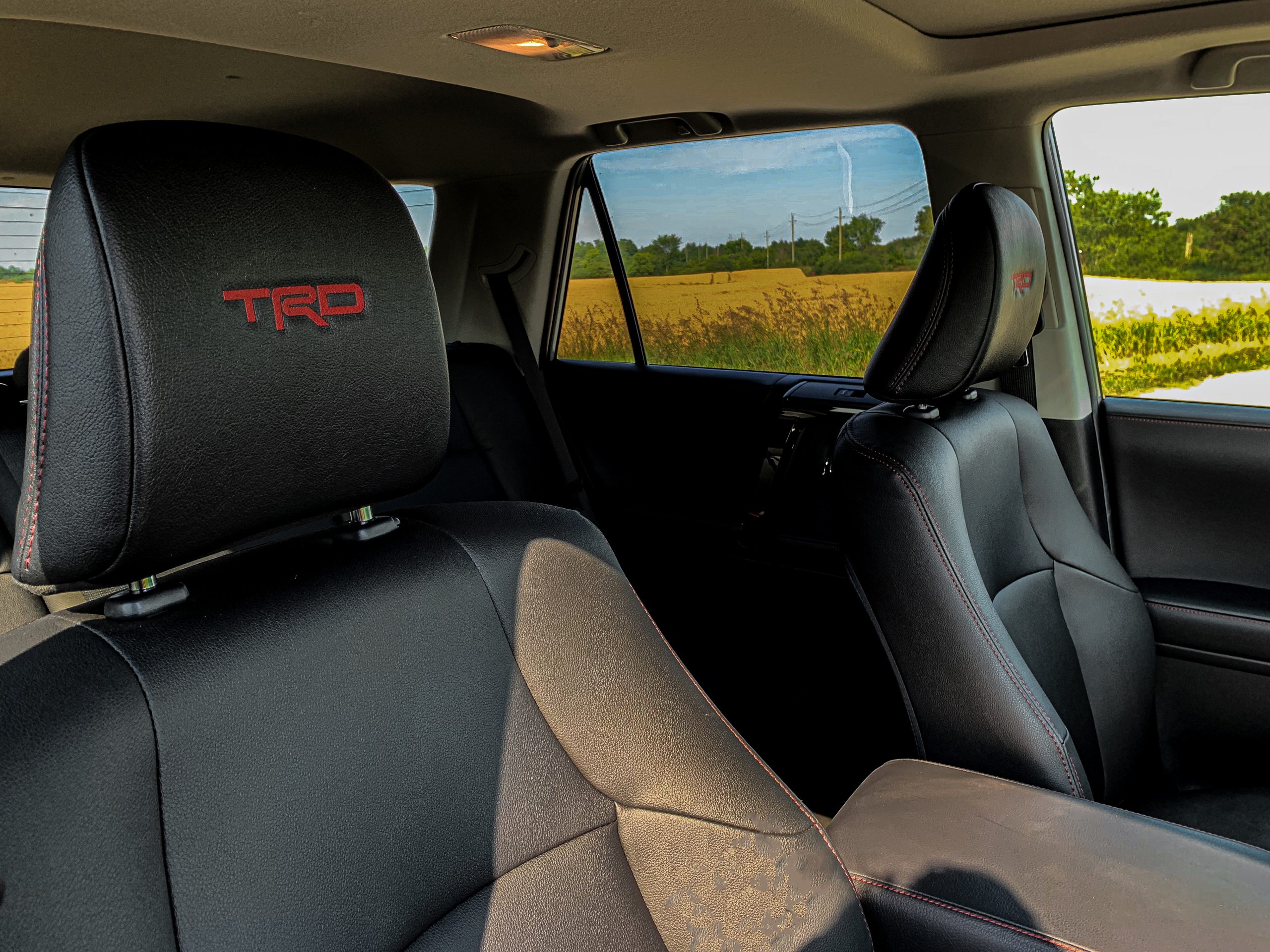 Flash ahead to 2021 and the only significant mechanical update has been a switch to Fox shock absorbers from the Bilstiens, which were first utilized for the 2019 model and have continued on.

Truely, the 4Runner feels like driving a vehicle from a previous generation. It’s a millennial vehicle living in a gen z world.

But on the other hand, I’d wager that’s probably what a potential 4Runner TRD Pro customer would find most appealing about it. If you’re someone who, for example, fancies off-roading, real off-roading, not just some cutesy “trail driving”, then the TRD Pro is probably at the top of your wish list. 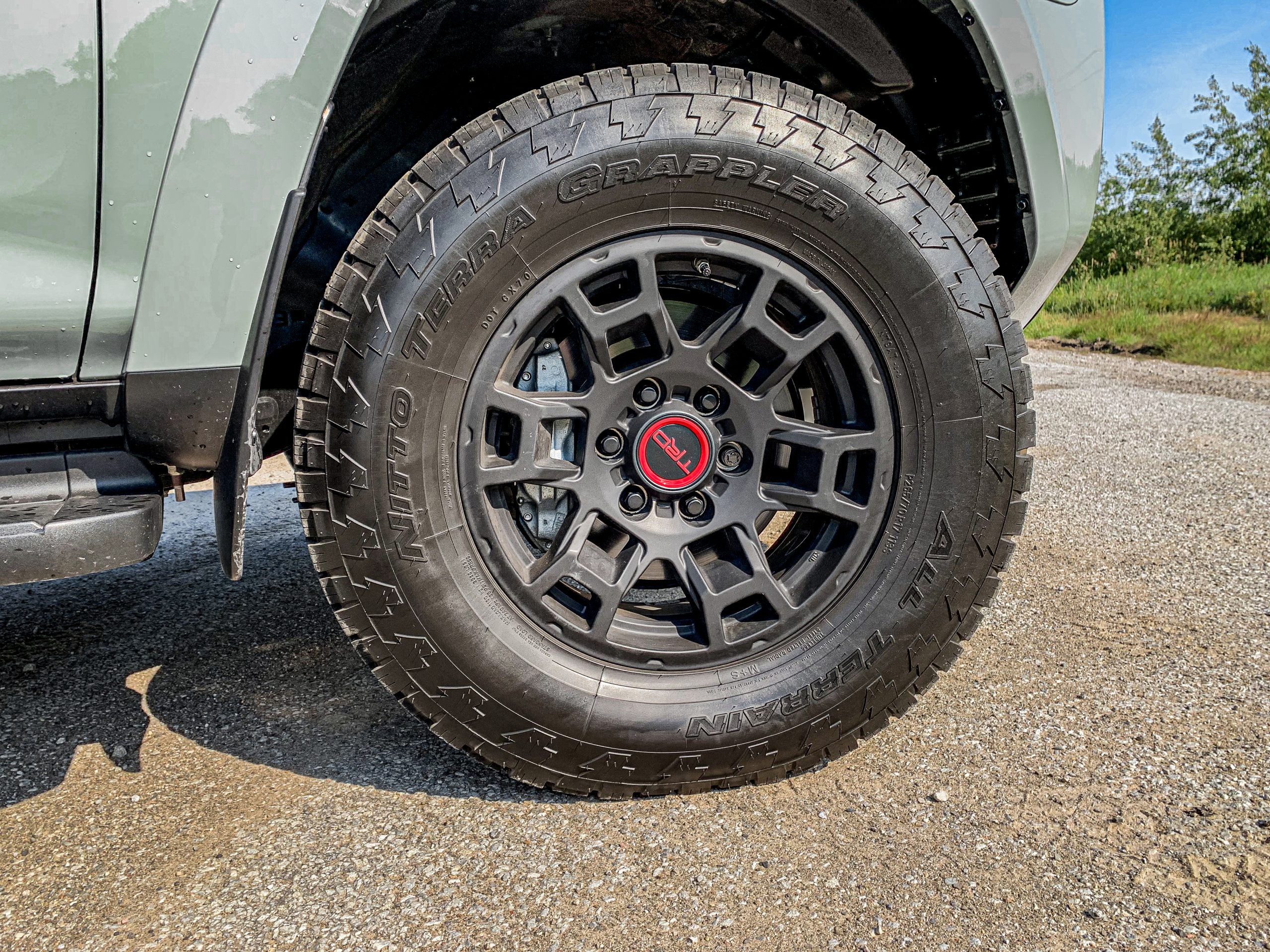 Did I take it up a mountain? No. But I did take it down (and up, for that matter) some very nasty unpaved roads near Port Severn on a rainy day. The TRD Pro basically scoffed at my pitiful “challenge”. Suffice to say it seemed almost impossible for a TRD Pro to get upset or get stuck in any “rough terrain” situation.

The 4Runner’s massive P265/70R17 tires simply scythe through wet gravel, mud and thick dirt and even cling to slippery rock faces. You’re also given extreme confidence that the undercarriage is safe from any nasty rocks or uneven roads thanks to the skid plates covering the transfer case, engine and front suspension. 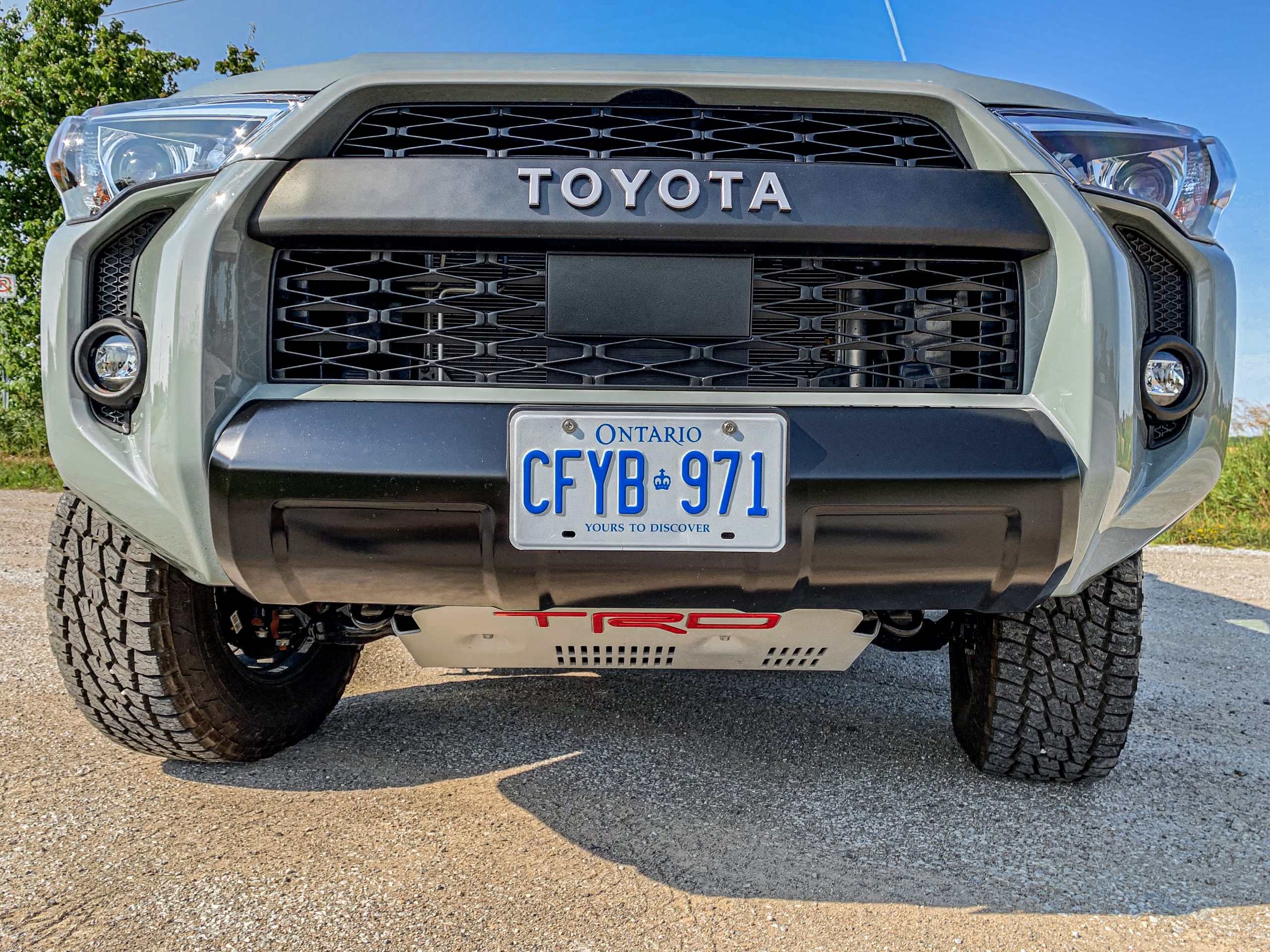 Surprisingly, even with its bulldozer tires and performance suspension, the TRD Pro is compliant and cushy on the highway. It’s even well-behaved while navigating the city. And since Toronto roads are about as smooth and well maintained as a hormonal teenager’s face, you can actually appreciate the 4Runner’s off-road capability while battling traffic on Adelaide St.

However, the TRD Pro’s “basket style roof rack” made underground parking a very, very sweaty experience. It makes the vehicle just slightly taller than most full-size pickup trucks — and in fact would not fit into the parking garage at my condo building. I had to park my tester in a private lot with an entrance which cleared the 4Runner’s roof rack by what seemed like millimeters.

But admittedly, it’s an off-road vehicle in the city, so that aspect is somewhat forgivable.

A more fundamental problem with the 4Runner is its dated drivetrain. The 4.0-litre V6 motivates the 4Runner like a school bus. With only 270 horsepower on tap, the lumbering SUV feels like it can barely get out of its own way. Matters are made worse by the 5-speed automatic, which not only restricts power delivery, but also reduces fuel efficiency while highway cruising. 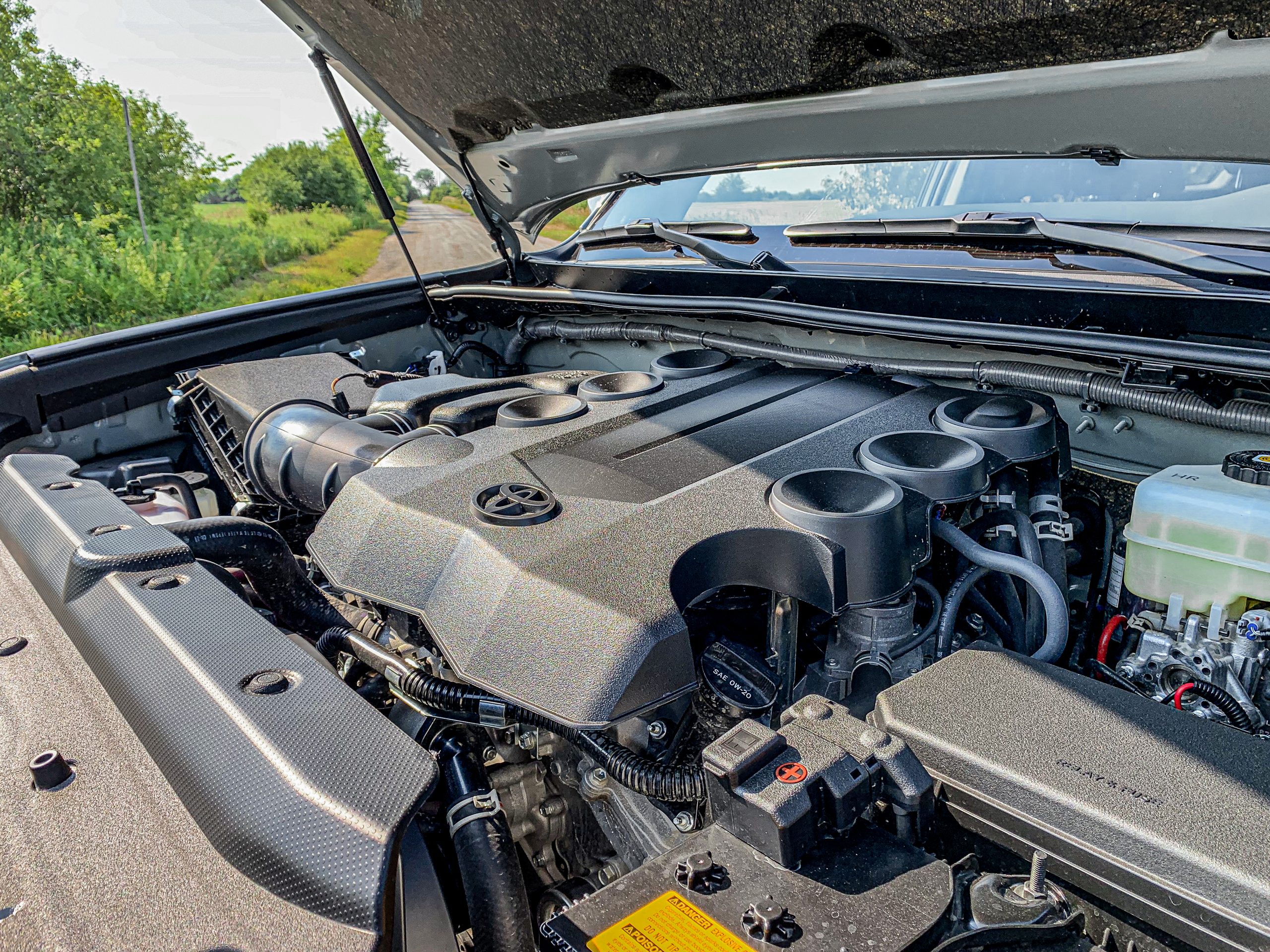 Why Toyota saw fit to utilize a tired 5-speed, rather than their 6-speed automatic — which is available in the Tacoma, with which the 4Runner shares a platform — is beyond me. The result is a deficit in acceleration with a simultaneous lack of fuel efficiency. One of those conditions may be forgivable if the other were not present, but the 4Runner’s Obama-era drivetrain offers the worst of both worlds.

Thankfully there’s a healthy dose of modern technology on the inside. 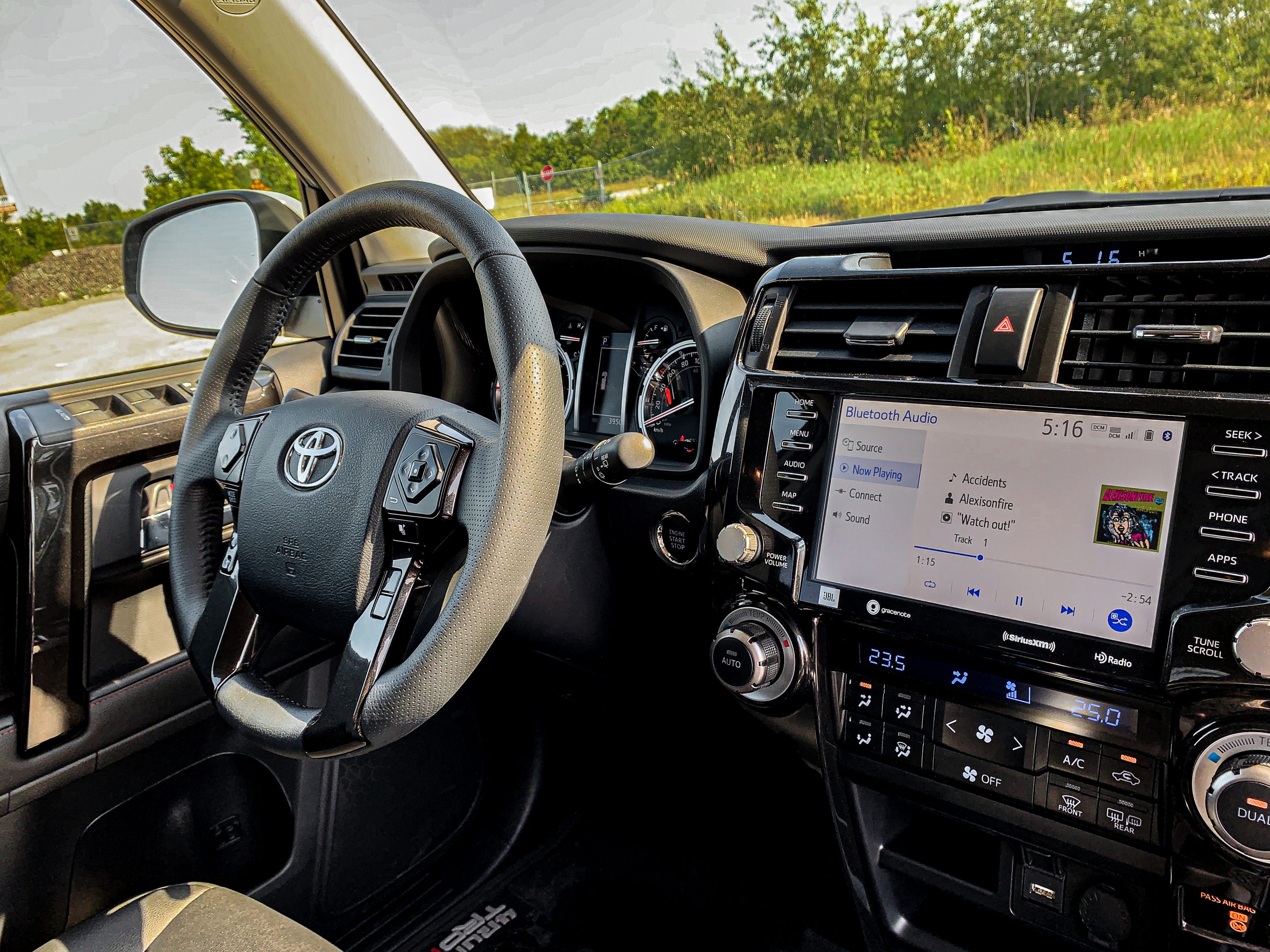 Toyota’s SofTex material is a step down from its NuLux material but is sufficient enough for something meant to get muddy.

Red TRD logos on the front seats will let your passengers know you put protein powder in your morning coffee. An 8-inch touch screen features embedded navigation, is Apple CarPlay and Android Auto compatible, and the optional 15-speaker JBL audio system available in our tester never failed to deliver high fidelity at any volume.

Also present is a 4.2-inch full colour MID in the gauge cluster, dual zone automatic climate control, a power slide / tilt moonroof, and power adjustable heated exterior mirrors — so, somebody was thinking of Canada, then. While there’s little you could describe as purely a gimmick when it comes to the TRD Pro’s mechanical capabilities … it’s hard to describe the exterior styling as anything but.

Sure, the metal side steps, mud flaps and skid plates are handy. And maybe you could make a case for the fender flares.

Though, the “Lunar Rock” paint colour is undeniably appealing. So much so it’s a colour which the general public seems to know by name. From the streets of Toronto to EnRoutes on the side of the 400 highway, I had multiple strangers approach me and excitedly ask of my tester, “Is that Lunar Rock?!”

The 4Runner TRD Pro is the tyrannosaurus rex of cars.

It’s an unbelievably impressive and capable thing. It’s perfectly adapted for its role and the job it was meant to do. I can’t imagine a TRD Pro not delivering on every expectation any actual customer would have of it— a bit like how when the t-rex shows up in Jurassic Park, it does the exact thing you think it’s going to do. And that is in no way disappointing. 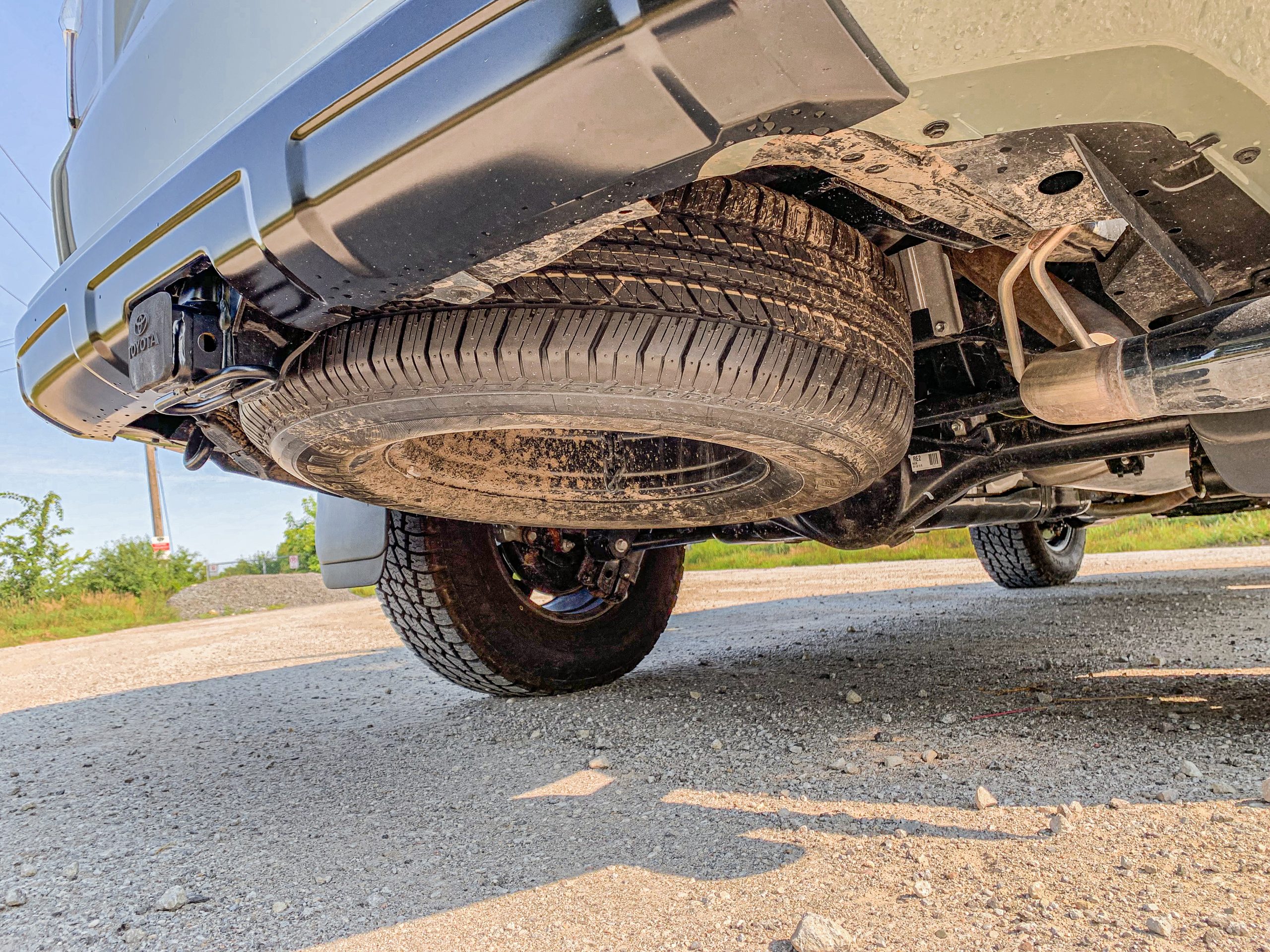 The 4Runner TRD Pro delivers on its core promise at a reasonable (if not entirely competitive) price point and for that, it remains a good car. But like a t-rex, the current 4Runner just isn’t very well adapted to the modern world. It’s too big, too lumbersome, too thirsty — it’s arms, too short. 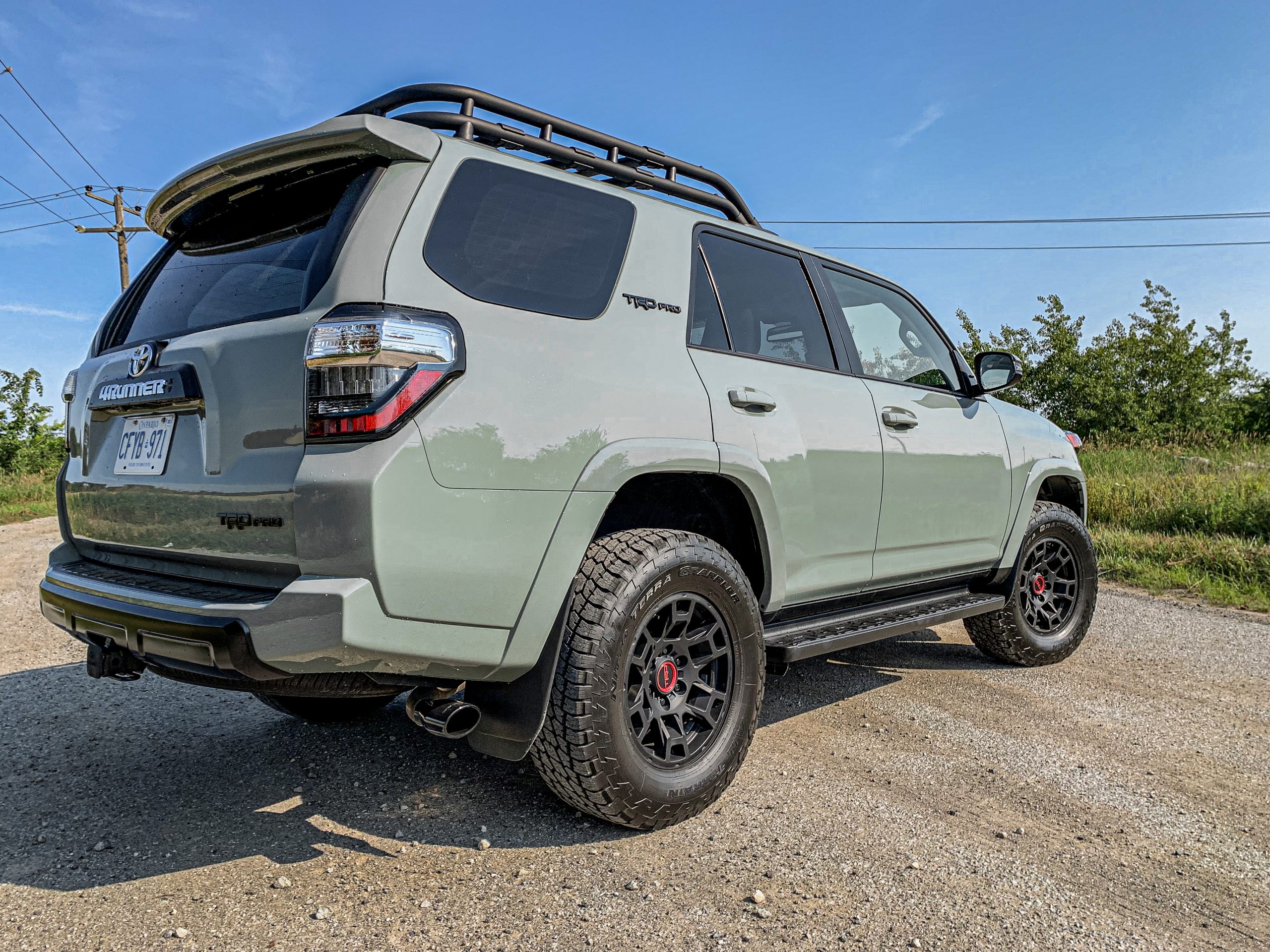 And with emerging off-roader species like the upcoming Ford Bronco entering the ecosystem, the 4Runner as a whole, and the TRD Pro in particular is going to have to find ways to evolve.