Still The Most Interesting Choice You Can Make

Now that the controversy around it has calmed and the suspicion as to whether the latest model could be called a worthy successor to the cult-worshipped Mark IV model has mostly settled we can finally examine the latest Toyota Supra on its own merits.

When the GR Supra launched in 2020, it was met with harsh criticism from the Fast and Furious faithful. “Heresy!” they cried when it was announced that the Supra would share a platform and drivetrain with the BMW Z4.

But the truth is Toyota has always raided other company’s parts bins when it comes to building their sports cars. As far back as the 2000GT, Toyota has always looked to partner with companies such as Yamaha, Subaru and of course, now, BMW to cut development costs and stay competitive in the marketplace.

The Supra proved a lot upon its return in 2020. Not only did it deliver the performance enthusiasts were looking for — it did so for a fraction of the price of its former rival (and the car fans were most upset the new Supra would not be directly competing against), the Nissan GTR.

Instead of building a supercar, Toyota built a sports car. One that was competitively priced and a reasonable alternative to a Porsche Cayman or BMW M2. And it was all the better for it. Not trying to build a GTR rival was perhaps the smartest move Toyota could have made.

For 2021, Toyota gave their 3.0 Premium model GR Supra even more horsepower. Critics bemoaned the fact the Supra launched with only 335 horsepower in 2020 — even though actual output was closer to 390.

This year, with some reworking of the intake and valve train, Toyota claims 382 horsepower and 368 lb-ft from the twin-scroll turbocharged, 24-valve DOHC, BMW-sourced B58 engine. Of course, they’re fibbing about the power this year, too. Factoring in parasitic loss, dyno lie-detectors indicate actual output is well over 400 at the flywheel. 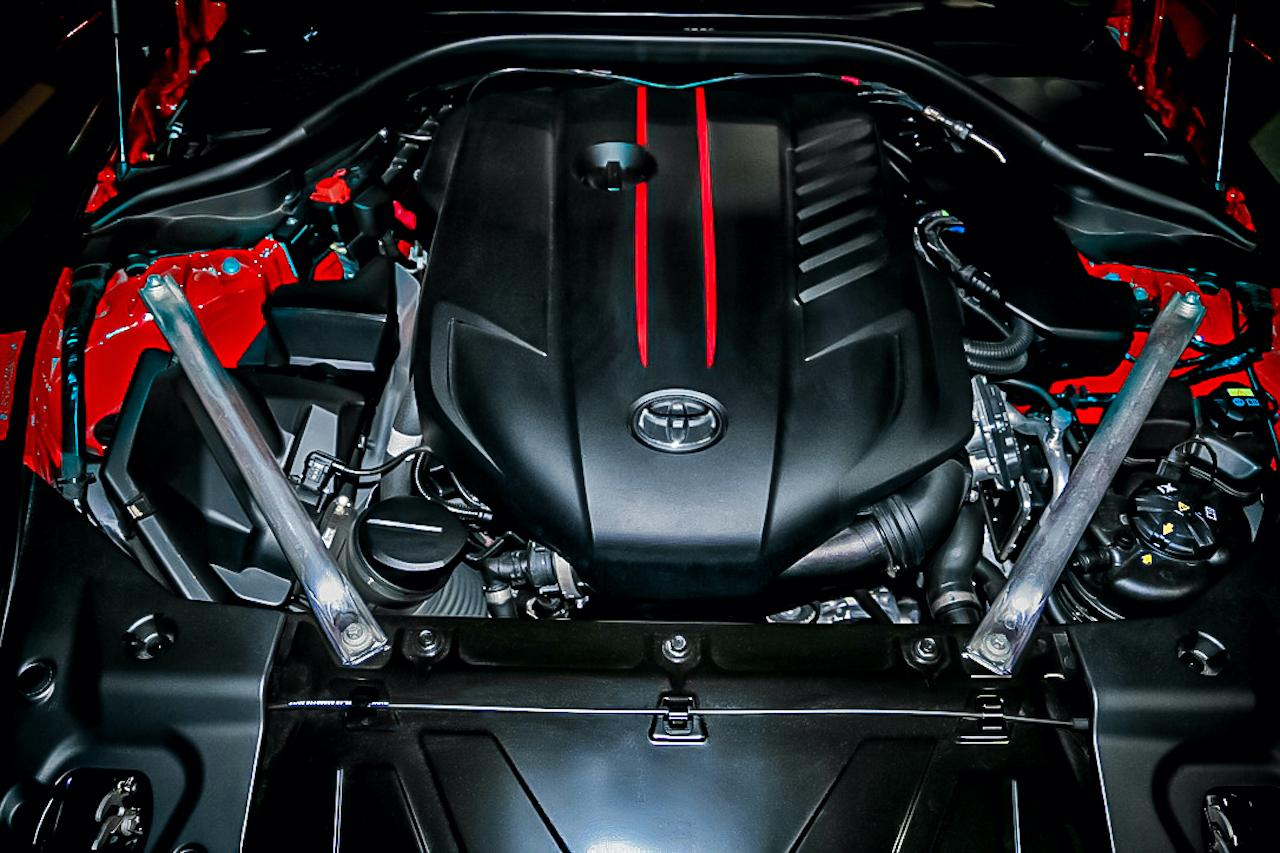 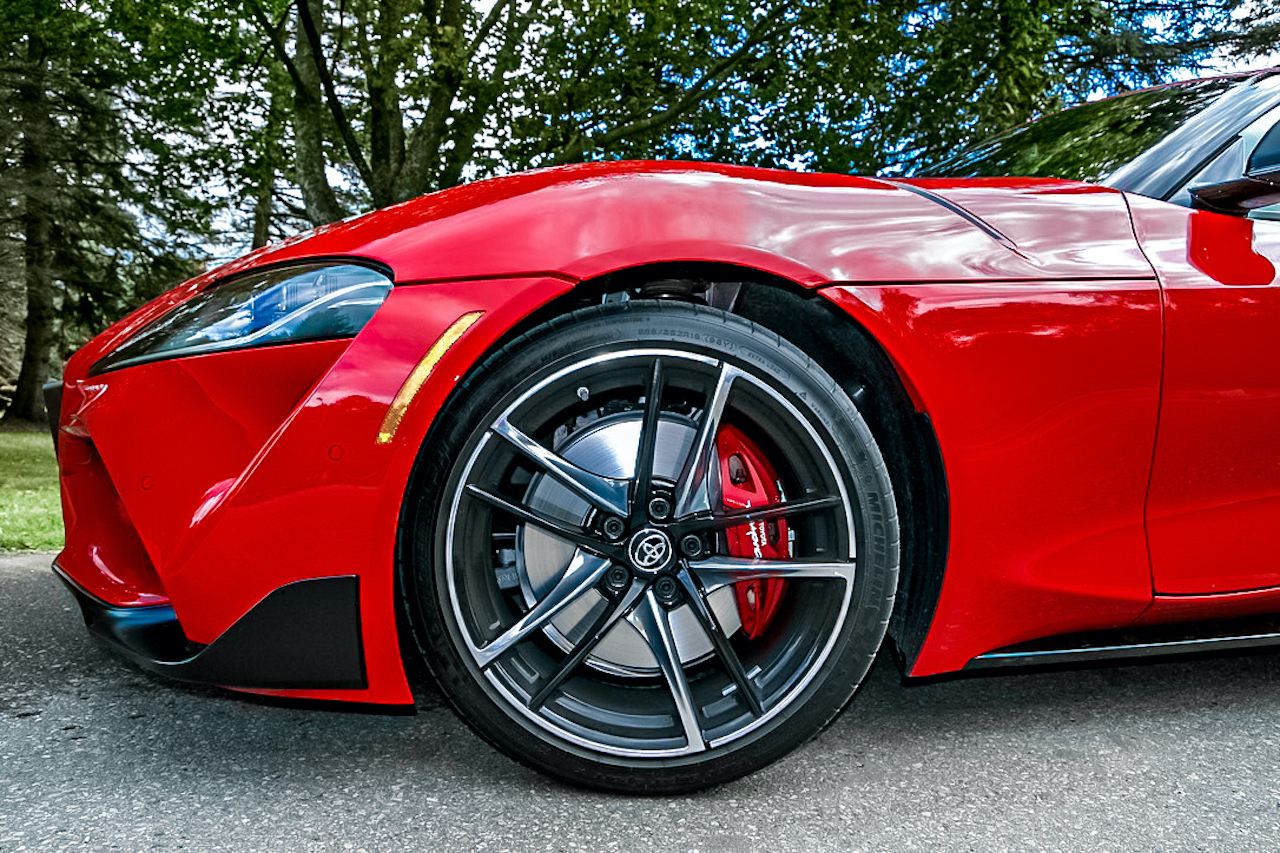 Coupled with the blistering-fast shifts of the 8-speed automatic transmission and the superglue-like grip of the Michelin Pilot Super Sport tires, the GR Supra will rocket you to 100km/h in under four seconds. If you’re wondering what that feels like, imagine having all of your blood, bones and organs vacuumed out your body… and then having them all shoved back in place when you slam on the Brembo 4-piston ventilated disc brakes.

Beyond just being fast, this sensation of the car getting away from you is chiefly down to the way the turbocharger builds boost. Once the boost comes on, it feels like the car is trying to escape your grip — like a dog straining the leash. Luckily, multi-link rear suspension, double-joint-type MacPherson strut front suspension, hollow front and rear stabilizer bars and front strut tower brace keep the GR Supra unbelievably composed and pliable.

Is it as overall vicious and visceral as accelerating a big turbo MKIV Supra? No. It’s infinitely more controlled and manageable. But the way it accelerates — with a blast of power at the higher end of the rev range — is not dissimilar.  Coupled with the Pilot Super Sport tires, it feels almost impossible for the car to get bent out of shape whilst going around a corner. You really can corner as fast as you dare. With the exception of when the tires are either cold or wet, the car grips the road ferociously and body roll is virtually non-existent.

What’s really amazing is that you would think the Supra would feel like it’s on rails — like you as the driver isn’t really connected to whatever operation the car is performing. But the Supra doesn’t feel that way at all. It feels organic. Sharp responses to inputs, plenty of feedback to the driver and an active exhaust which crackles and pops when you let off the throttle helps enforce this “organic” feel. A lot.

Would a manual transmission make the experience even better? Undoubtedly. Toyota’s decision to not offer a manual on the current Supra is simply baffling. But as it stands, there is no lack of fun… or speed to be had.

The Supra’s real party trick, however, is just how comfortable, calm and quiet it is with Sport Mode turned off. It’s sofa couch levels of comfort. I’ve never driven a sports car that’s even half as comfortable in the city or in traffic. The leather seats help a lot. They’re 14-way power adjustable units with some of the best side bolstering I’ve ever experienced. I’d say they’re about as well-bolstered as the Honda Civic Type-R. However, unlike the Type R’s red buckets, the Supra seats are nowhere near as stiff and much, much comfier for long-distance driving.

It’s not even hopelessly uneconomical. The worst fuel mileage I could manage was 10.5L/100km. 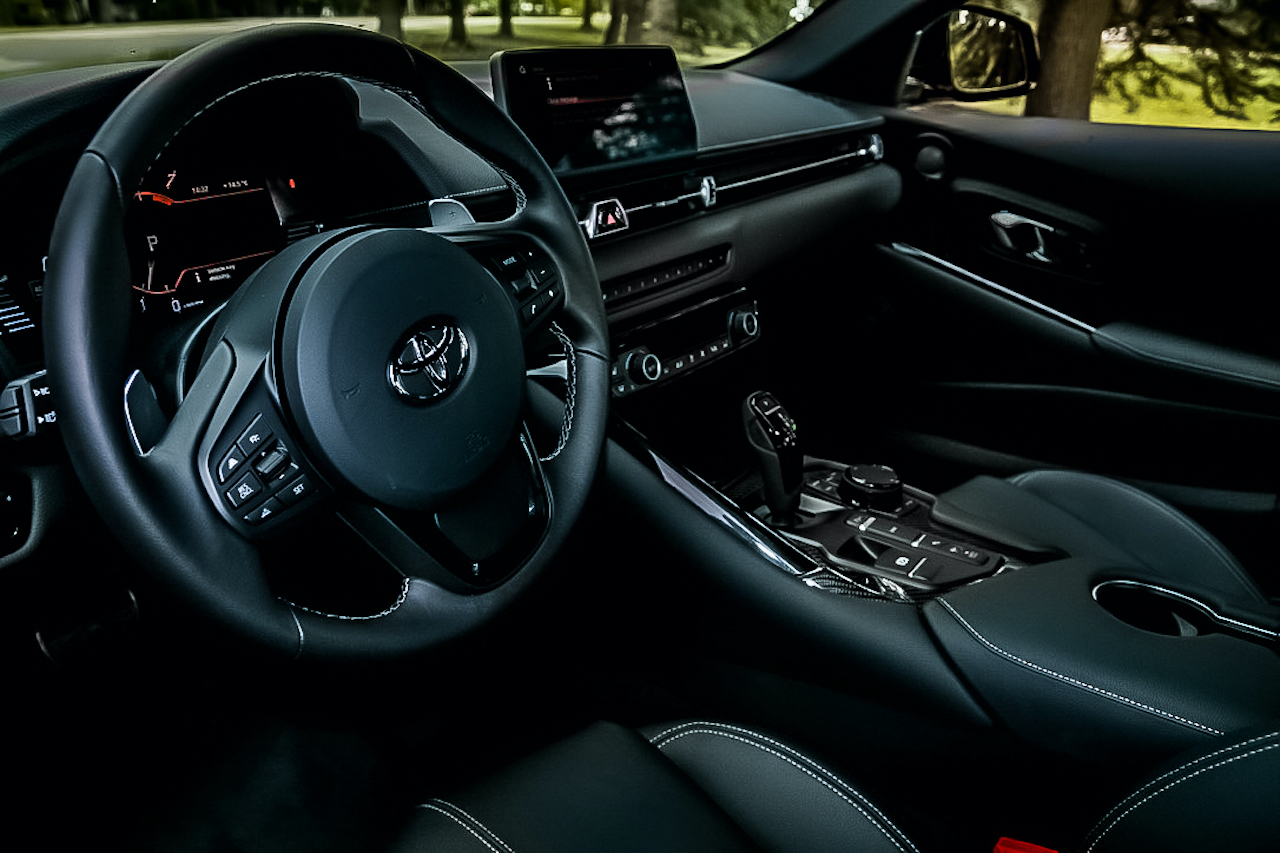 Probably the biggest strike against the Supra is its BMW-sourced infotainment system. Navigating through the 8.8-inch touch screen with the Touchpad Rotary Control will make you question if the system’s UI designer has ever met a human being before.  The menus you want feel as if they’re hidden behind multiple option trees, and selecting your desired function is never as intuitive as you feel it should be. There are short-cut buttons placed around the wheel to access each of the primary menu trees. However they’re difficult to read from the driver’s seat.

However, the 12 Speaker JBL Audio System is excellent, so once you do get your music playing, you’ll be a very happy camper.

Finally, it has to be said that the Supra is very, very difficult to see out of. The giant b-pillars and narrow rear window mean you can’t check your blind spots. At all. A blind spot monitor with rear cross traffic alert helps to remedy this problem. But you’ll still find yourself changing lanes and turning at intersections with your fingers crossed.

If you want to compare the new GR Supra to the old MKIV, you have to look at the facts. It’s a rear-wheel-drive, sports-coupe with a turbocharged, closed-deck inline six and a sub four-second 0-100 km/h time. The formula is correct and so are the performance numbers.

But the past is the past and so I think it’s more interesting to look at how the GR Supra sits in the current marketplace.

Granted, $70,000 is an odd place to be. For $15,000 less, you could have yourself a Mustang GT Performance Pack 2. For about $5,000 more, you could have a BMW M2. Both offer similar performance. Both are icons. Both are purchases nobody would question you for making.

However, both the Mustang and the Bimmer get lost in a crowd. Both are commonplace and even somewhat ubiquitous. The Supra is anything but. Its styling, its presence, its badge are all immediately recognizable and have the ability to excite passersby. It stands out because it’s different. And that means it’s special. 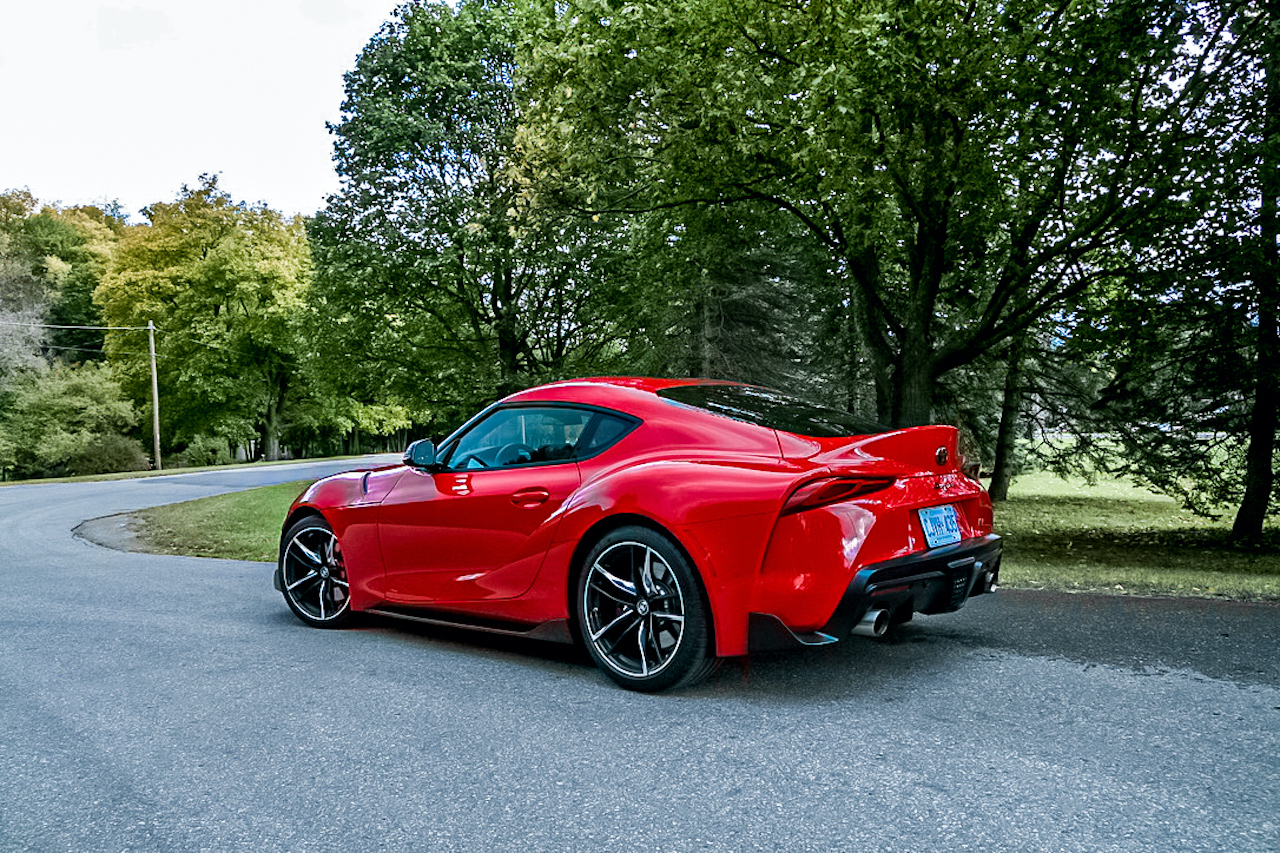 In the week I had one, I got stopped at gas stations, swarmed by car enthusiasts in parking lots and asked by parents to rev the engine as a way to make their kids laugh and exclaim, “cool!”

The GR Supra is a different choice. An interesting choice. The kind of choice made by an individual who doesn’t subscribe to the groupthink of modern car culture. But most importantly, it’s the kind of choice that will put a smile on people’s faces.