Before my week with the new fourth generation 2022 Acura MDX recently, I had last experienced Acura’s largest SUV during a comparison test with a handful of similar mid-size, three-row luxury people-movers: the 2018 Volvo XC90, a BMW X5 equipped with the optional third row, and the then-newly enlarged six-or-seven-seat Lexus RX 350L. After all the vehicles were crawled through, driven back-to-back along the same route, and rated by four experienced testers, the MDX finished a close second.

A somewhat surprising result, given that the Acura was up against the sales powerhouses of the category at the time. But the Acura’s least costly as tested price combined with its roominess demonstrated a value-luxury formula that Acura has not strayed far from with this new version of the MDX.

For 2022, the latest generation MDX grows in size to provide more stretch-out space for passengers, offers a more sophisticated suspension and all-wheel drive system, plus some worthy new safety features. On the minus side, it has not changed much with its aging engine, resulting in power and fuel consumption numbers that no longer impress as much as they did three years ago. And then there’s that infernal touch pad…

But let’s start with the MDX’s new design. The grille is the same boldly in-your-face hexagonal shape, but with a longer and sleeker hood thanks to a wheelbase stretch of seven centimetres, its slightly lower roof leading to a 3.5 cm wider body. 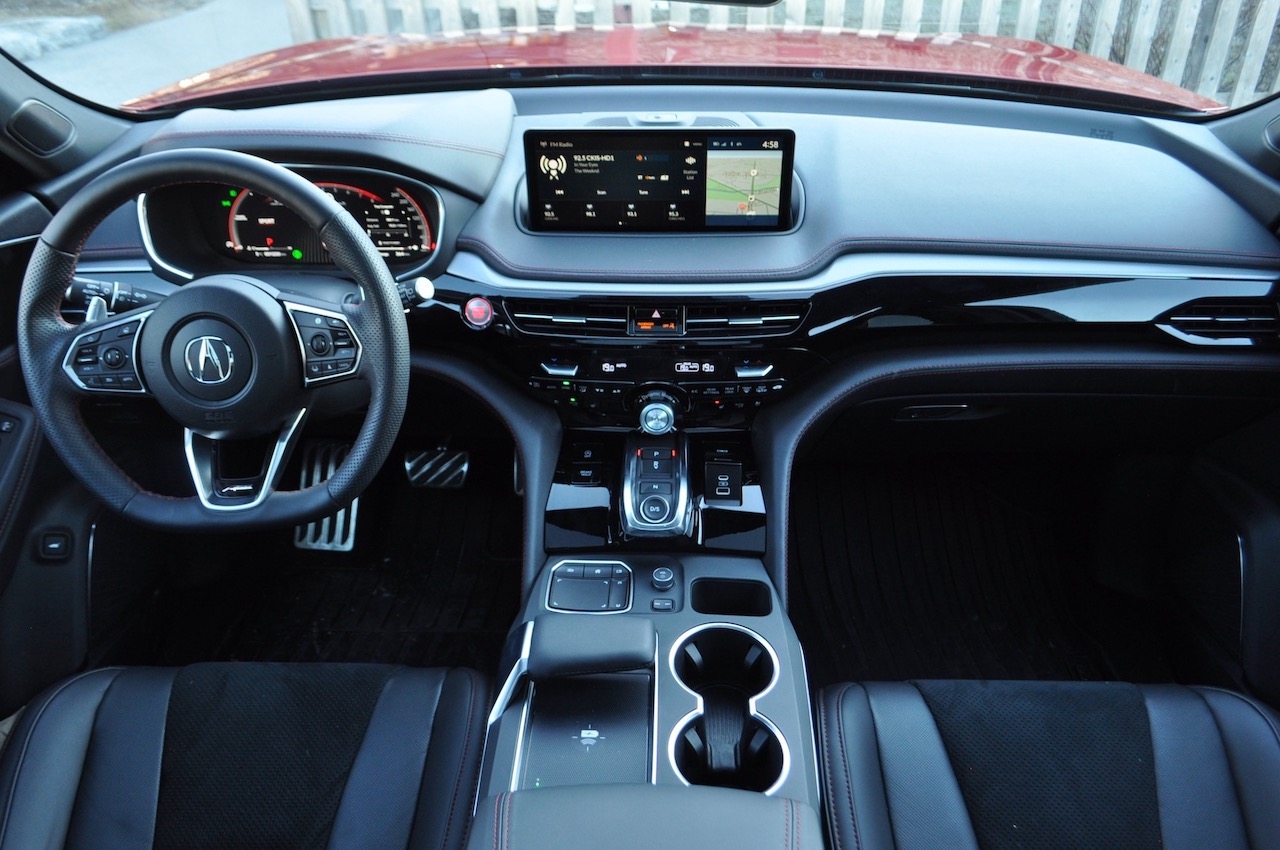 The end result is an extra 181 litres of passenger room. The entire body is roughly 5.5 cm longer, contributing to more room behind the third row (at 513 cubic litres), with the third row folded (a generous 1,368 cubic litres total) and with both rows folded, the flat floor helps provide a healthy 2,690 cubic litres – notably more than the extended three-row Lexus RX L models as well as the Lincoln Aviator.

Space for gear and people is key in this segment, as is the new platform’s ability to offer more comfort to the MDX’s passengers. A new double-wishbone front suspension and the increasingly rare shift paddles behind the steering wheel also help give it some subtle yet sophisticated sporting capability. A little less subtle are this A-Spec model’s flat-bottom steering wheel, its “Shark grey” (basically black) wheels that match the black rearview mirror housings, while its ultra-suede plus leather seats are also unique to the nearly top-line A-Spec sport trim.

More power from the 3.5-litre V6 for the A-Spec however would have been nice, or more for any model, as the 290 hp and 267 lb-ft of torque is the same as before, and actually less than some 2.0-litre turbo four-cylinder engines on some rivals now. Granted, the MDX’s V6 provides generously smooth and unobtrusive power for the most part, though its newly upgraded 10-speed automatic transmission doesn’t help much in the fuel efficiency department, where the MDX’s averages of 12.3 L/100km in the city, 9.4 highway and 10.8 overall have fallen down towards the rear of the upscale mid-size SUV pack.

And that’s not looking at some of the MDX’s hybrid, plug-in hybrid or BEV rivals, such as the Lexus RX 450 hL, the Lincoln Aviator Grand Touring PHEV and the Tesla Model Y 7-seater, respectively. The prior MDX Sport Hybrid model with 320+ hp and better fuel efficiency (a 9.0L/100km overall average) is no more, which is a shame for a company that used to pride itself on its advanced powertrains. 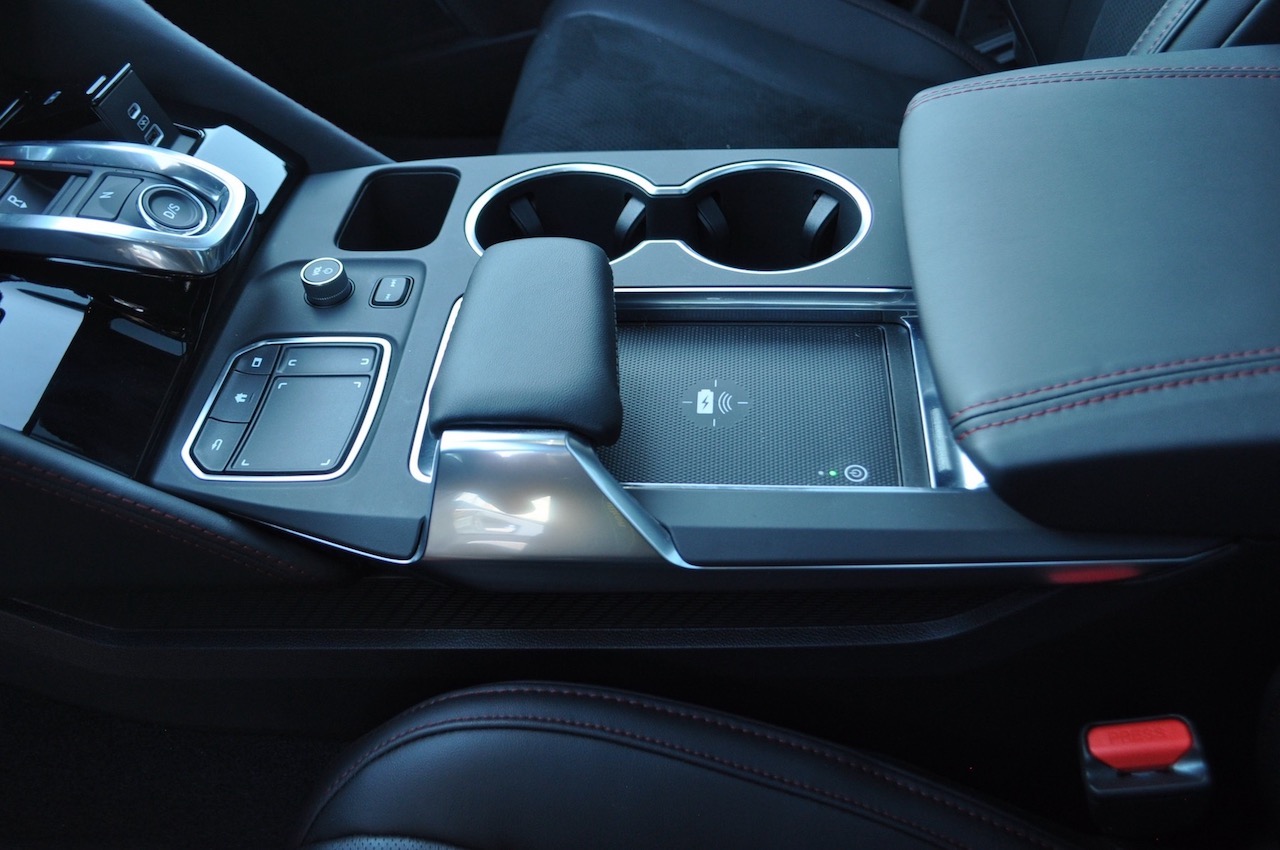 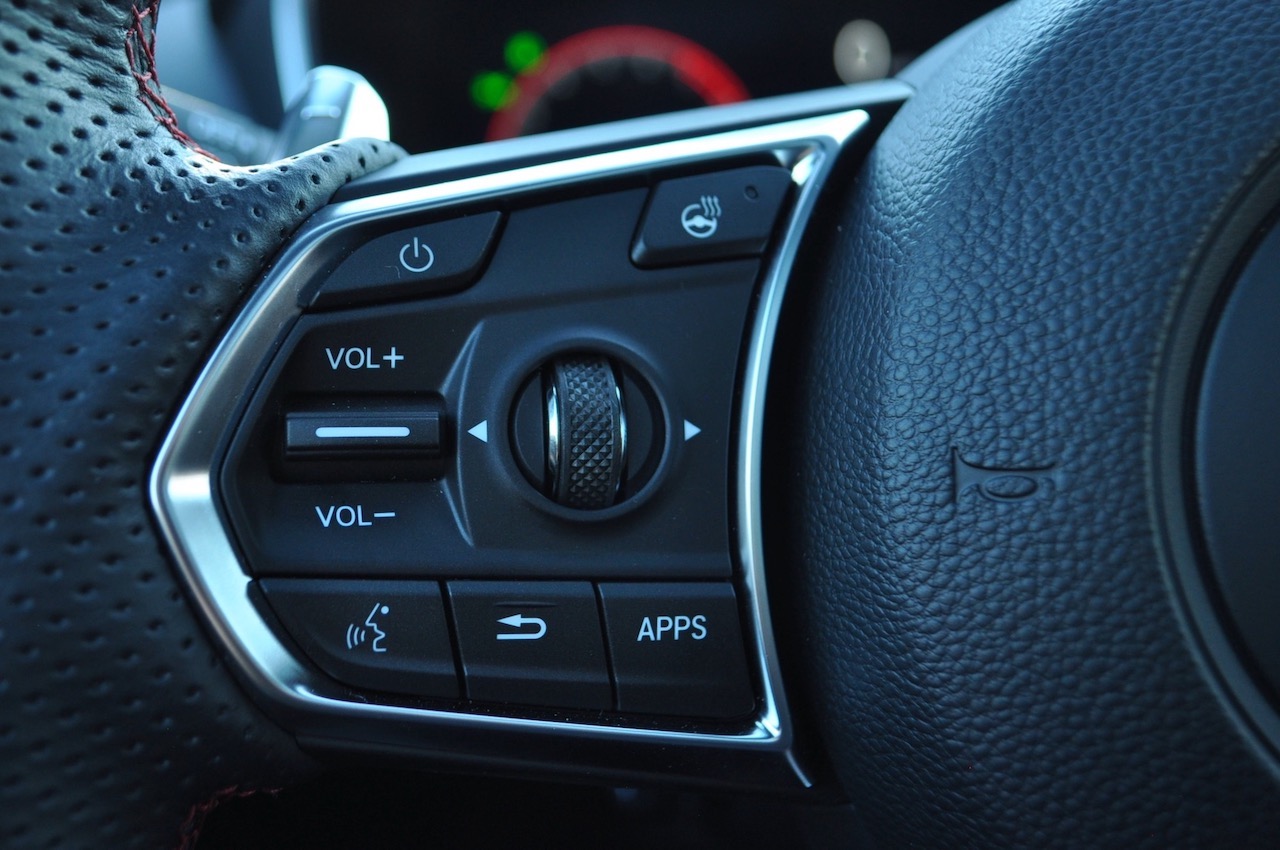 Case in point: the Acura NSX, the brand’s 573 hp supercar, whose gas-electric hybrid V6 of the same engine size as the MDX puts out almost double its power, yet it achieves 11.0 L/100 km overall – or basically the same official mileage as the latest gen MDX.

Granted, that NSX is a track-focused supercar that costs roughly three times what this MDX costs. A base MDX starts at a mighty reasonable $56,405, and comes with Acura’s Super Handling All-Wheel Drive, which is tuned more for performance than the Honda Pilot’s more foul weather-oriented system. The SH-AWD has 30 per cent faster response time to shifting around the power to each wheel, said Honda Canada executives in a deep dive during a recent technical webinar on the difference of all their vehicles’ all-wheel drive systems.

And most impressively, it offers three times as much torque vectoring capability in dry corners at 100 km/h.

On the road, this system on winter tires offered an overall responsive package, the shift paddles in particular ready and willing to help you attack that highway onramp for fun or when trying not to be late somewhere important. But it did seem strange to have an S for Sport (presumably) on the same transmission button as D, as well as a separate ’Sport’ mode accessible by twisting the Dynamic mode dial just above the shifter, which also shifts your tach to be more prominent, and seems to sharpen up the revs as well as the overall driving demeanour of the MDX more than ‘S’ on its own.

Inside, the base MDX also offers a panoramic sunroof, wireless Apple CarPlay and Android Auto, and the Amazon Alexa app standard, though you may be surprised to find no native navi system nor any parking sensors on the base trim. The A-Spec model that I drove starts at $63,405, and on top of the aforementioned sporty trimmings, it also added the niceties of the one-up Tech package, such as a power tailgate with hands-free foot operation, power-folding mirrors, and heated second row seats. 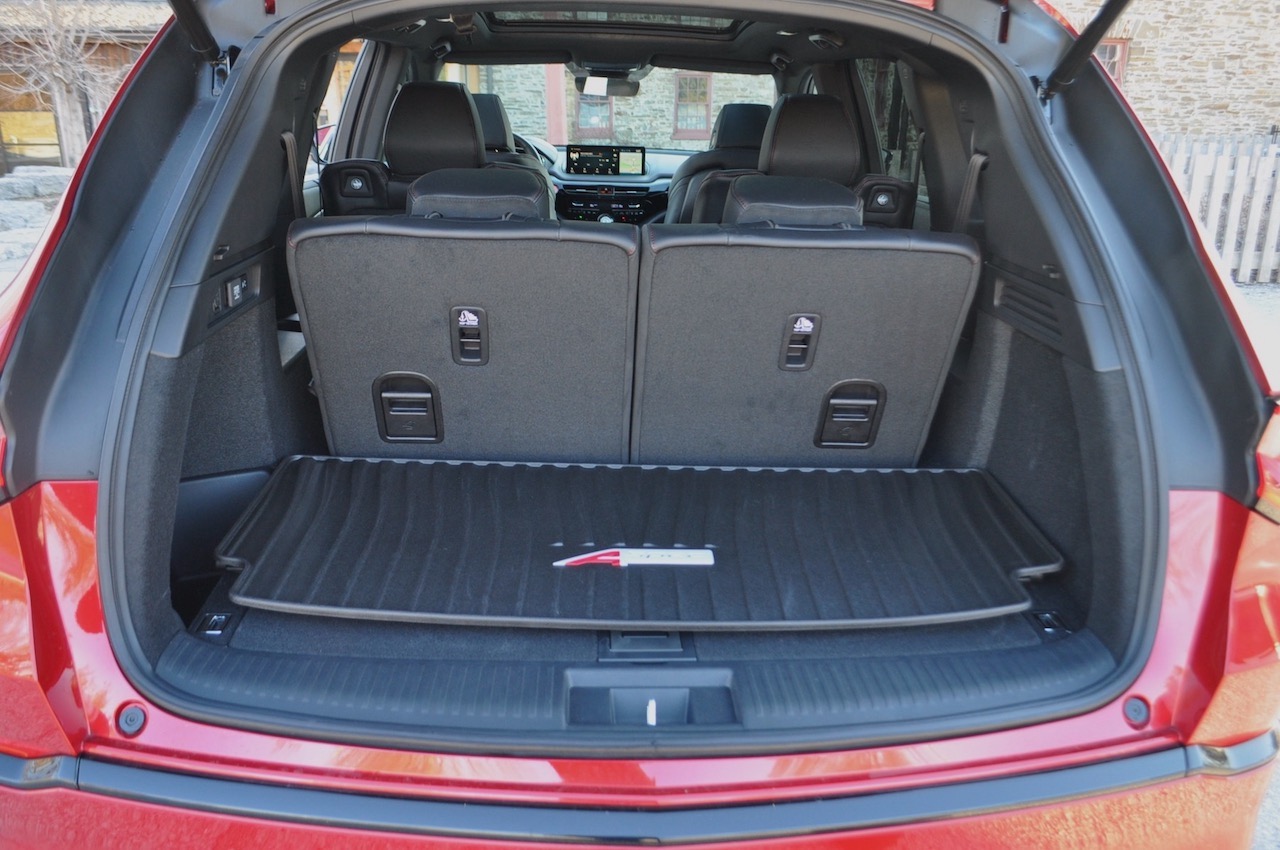 But even in this $65k A-Spec trim, it seems surprising not to have a surround view camera, especially when half the large centre screen is black when in Reverse. Which seems to continuously remind you that it offers full 360-degree visibility only on the top line Platinum Elite trim ($67,405, outside of the $2,075 freight fee common to all MDXs). The colour head-up display (HUD), genuine wood, and side roof rails are also reserved for this top trim.

Of note on every MDX (and TLX sedan) model, there is a new Acura/Honda-designed passenger front airbag with a new three-chamber “catcher’s mitt”-type design. It has an uninflated “sail panel” between quickly inflating air chambers that helps catch and decelerate the passenger’s head from multiple angles, with a patented system co-developed with supplier Autoliv. Honda and Acura have exclusive access to the technology to start, but have released it to other automakers to soon improve industry-wide safety.

And then there’s their latest touchpad iteration of Acura’s True Touchpad Interface (TTI). Introduced in 2018, it’s safe to say this little square between the front seats was not nearly as successful an innovation. In theory, this type of system avoids touchscreen smudges, and means the large screen can be further away, aiding the sense of spaciousness inside. But it still annoyingly finds a way to bounce away from what you’re looking to select, even when parked, much less driving.

At least the touchpad has handy back and home buttons, plus a real volume knob nearby.  So it is possible to take some time and set it up so that you can largely avoid using the touchpad by only using steering wheel buttons. A steering wheel that has replaced the traditional Band or Mode button with an ‘Apps’ button that allows the driver to scroll through AM, FM, Bluetooth, CarPlay, Alexa and satellite radio options, among others. Sign of the times.

In the end then, the 2022 MDX is a notable step forward for Acura in many areas that are key for family-oriented luxury SUV buyers: comfort, roominess, and advanced convenience and safety features. And even if the drivetrain no longer sparkles with engineering ambition, well, there’s still a lot of luxury inside for a price that’s still very reasonable in its class.