Say hello to the all-new Volkswagen Golf. No, it doesn’t look like a compact hatchback, and yes, the badge on the back says Taos, but this vehicle is the one that has replaced the Golf (notably excepting the GTI and R) in Canada. Buyers want crossovers and VW has responded.

Of course, the Taos is much larger than the outgoing Golf. Volkswagen learned long ago that buyers in North America (and China, where this model first launched) prefer their cars by the kilo and cubic foot, not clever packaging and tight exterior dimensions. It started with the Jetta and took off with the made for here Atlas and the latest long-wheelbase Tiguan. 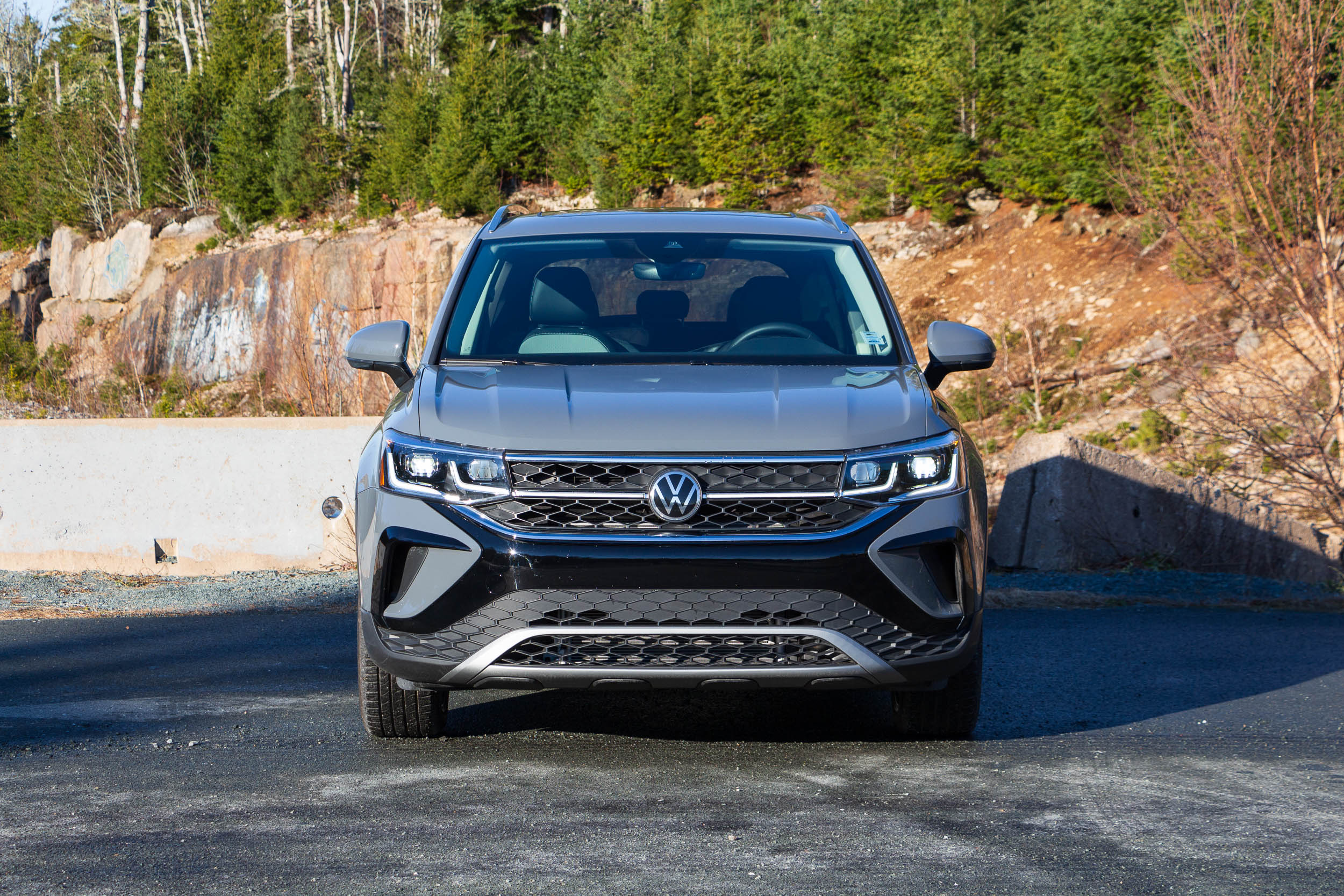 The upside of the Volkswagen growth spurt is massive interior space. The Golf was not exactly cramped inside, but the Taos feels larger than anything else in its size range. What range that is exactly is hard to pinpoint; exterior dimensions fit in between smaller crossovers like the Mazda CX-30 and larger models like VW’s own Tiguan, but it feels, even for your XXL-size writer, as big as the Tiguan.

With significantly more headroom than the Tiguan and equal shoulder and knee space, the only place the Taos shows you its smaller size is in the boot. Max cargo space is smaller, at 705L versus 1,064L and a similar gap with the second seat folded, but both numbers are still much larger than Golf has ever offered. Everything is well laid out in the cabin, which follows the design language of the Atlas and Tiguan. Not fancy, but very usable and feels well put together.

Just one engine is offered in the Taos, a 1.5-litre turbo-four making 158 hp and 184 lb-ft of torque. It doesn’t make the Taos a rocket ship, but it was never lacking power for passing or short on-ramps. The engine was quiet, with smooth power delivery and little lag. 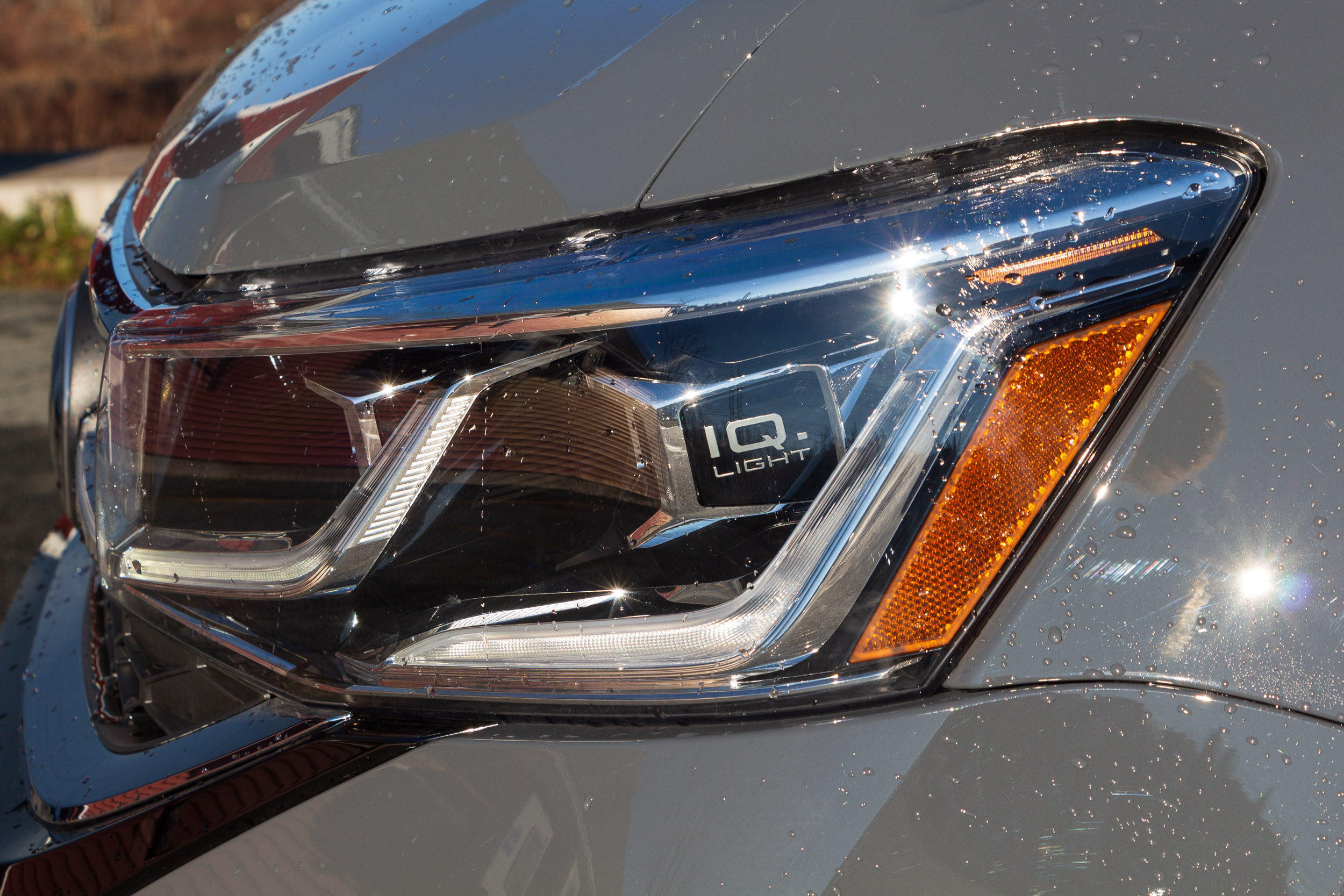 We don’t have such nice things to say about the seven-speed dual-clutch automatic that comes along with 4Motion all-wheel drive (front-drivers get an eight-speed auto). Our tester, at least, felt like it needed more time in the gearbox development office. On the move, shift feel and speeds were fine; not noteworthy in the plus or minus column, but from a stop the Taos was painful. We mean that literally, as during an entire week and around six hundred km of driving, not once were we able to pull away from a stop in a manner that didn’t feel like riding with someone learning stick for the very first time.

No matter the drive mode or what we tried with the accelerator, the Taos would roll forward until around 2,000 r.p.m., and then lurch as though the clutch finally grabbed. It led to long waits at stop signs – you can’t pull out in a smaller gap when the vehicle launches differently every time – and plenty of neck snaps. 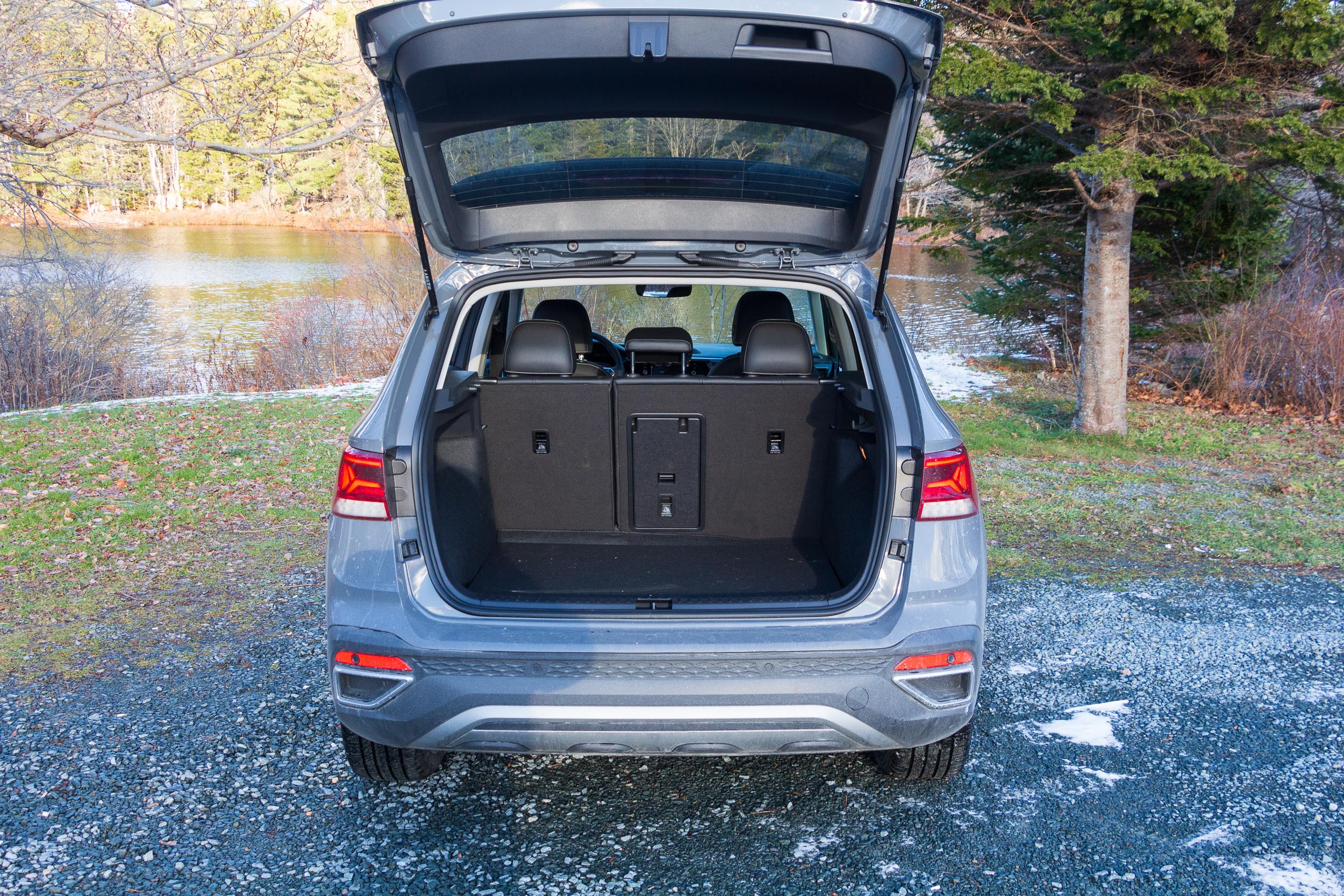 That feeling of being not quite finished carried over into the ride of the Taos too. If you’re expecting a buttoned-down vault-like Golf feel, you won’t find it here. It’s not going to knock you around on big bumps, but it has a bit too much spring and too little shock, leading to Taos feeling busy and moving around continually. Though it settles down more on the highway, back roads are somewhat of a chore. My partner, from the passenger seat, described it repeatedly as “herky-jerky”.

Volkswagen has filled the large interior with stuff, starting with the standard 8.0-inch digital dash and a 6.5-inch touchscreen. Android Auto and Apple CarPlay are standard across the board, with Comfortline and Highline getting the wireless versions of those systems (with wireless charging) as well as an 8.0-inch screen. Highline gets a 10.25-inch digital dash and Beats audio as well as navigation. The VW system is quick, smooth, and intuitive overall, though the navigation takes more practice to use eyes-off.

Heated seats, keyless entry and push-start are also standard, and the Taos gets 17-inch alloys and LED head and taillights on even the base version. All get two front USB ports, though both are USB-C, not the older (but still more common) A. A three-setting heated wheel is lovely, but only on Highline.

Advanced driver assistance features don’t arrive until Trendline, which gets front assist with emergency braking, blind spot monitoring, and rear cross traffic alert. Highline adds automatic brights and rear parking sensors, but if you want features like radar cruise, lane keeping, and road sign display, you’ll need to add an option pack to Highline. When competitors offer many of those as standard kit, this tech gatekeeping is a bit of a surprise. 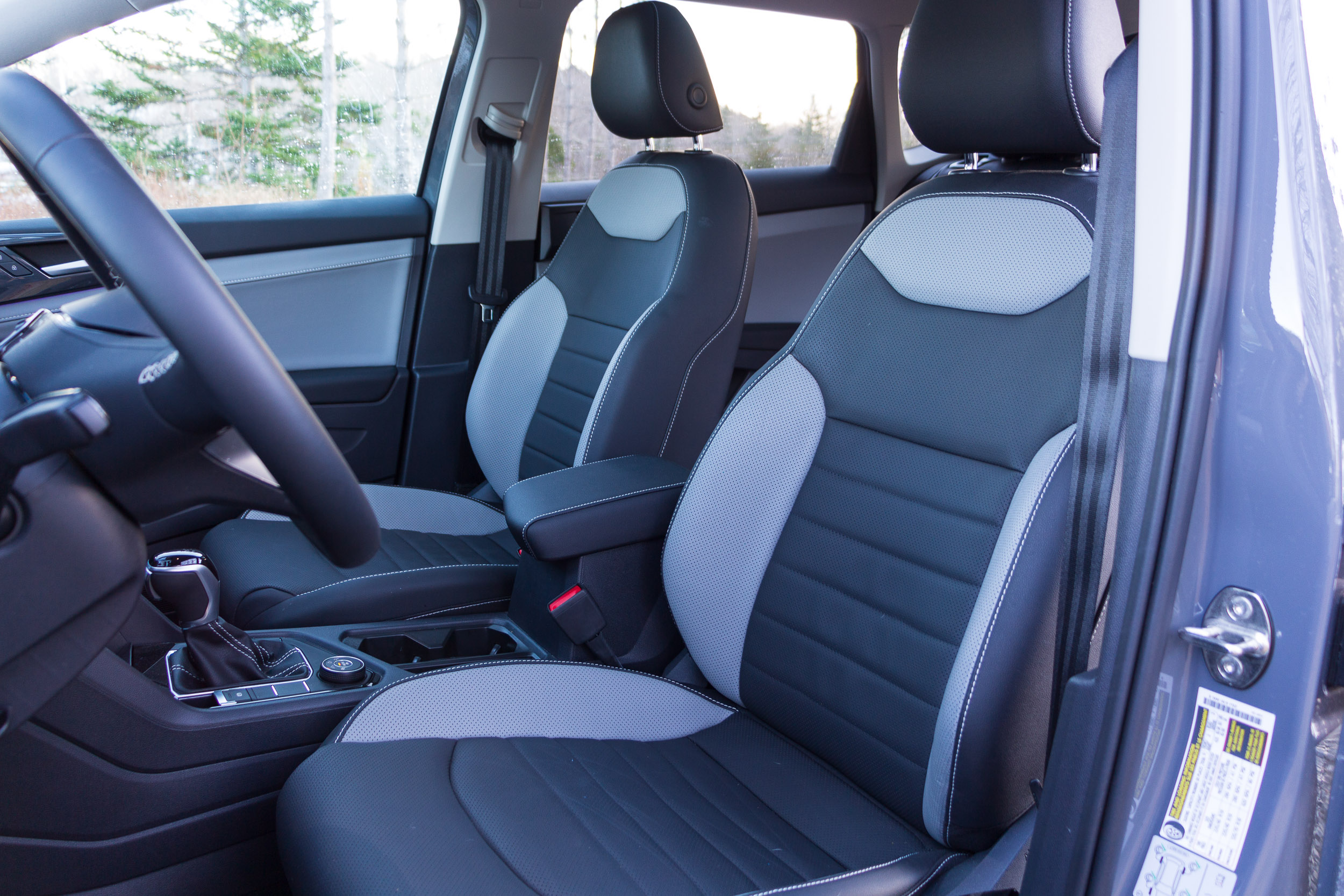 What Taos Highline has that VW glosses over is the very handy Park Distance Control function. Dive into the owner’s manual and you’ll learn that a small button on the backup camera screen turns on this parking aid that’s handier than even self-parking offered currently by other automakers. When activated, dynamic guidelines on the camera help you better gauge the size of the parking space, where you need to be, and where you are in the space, for both parallel and perpendicular spots. It’s like using a Game Genie for parking.

AWD versions of the Taos are rated for an estimated 7.4 L/100 km on the highway and 9.5 in the city, with front-drive models at 6.6/8.4. Mixed driving in freezing temperatures (on the optional 19-inch wheels) returned 8.0 L/100km in our AWD tester, a figure that is quite good for any non-hybrid crossover.

The new Golf, sorry, Taos, is larger, roomier, has more tech, and is exactly the vehicle Canadians are buying right now in droves. The Taos says ciao to decades of Golf, but like the Atlas and Tiguan, customers have voted with their monthly payments that this is what they want. A few tweaks to the gearbox and being less stingy with the ADAS features, and this would be a heck of a package. As is, the 2022 Volkswagen Taos is not quite there in a very competitive segment. 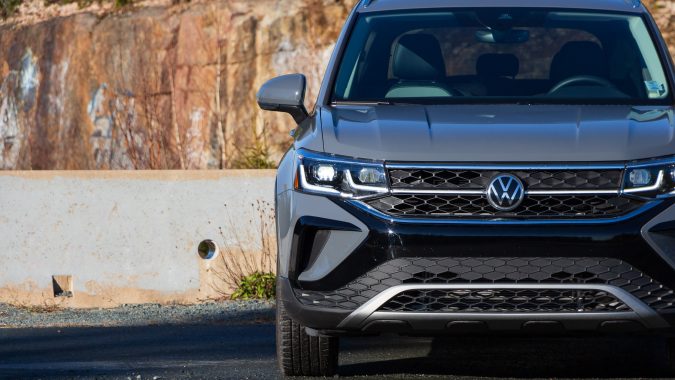 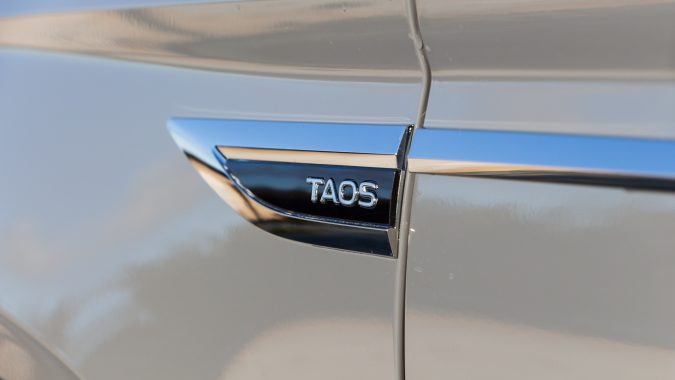 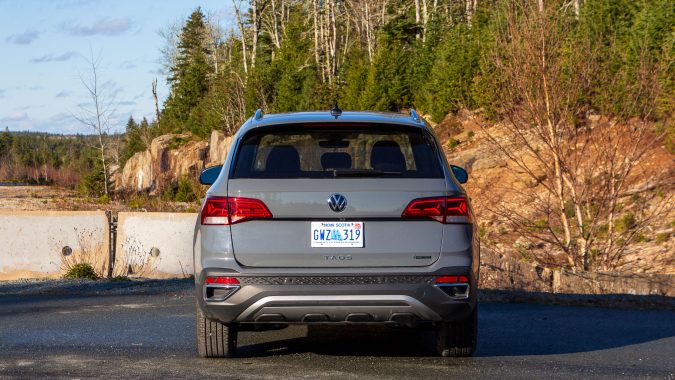 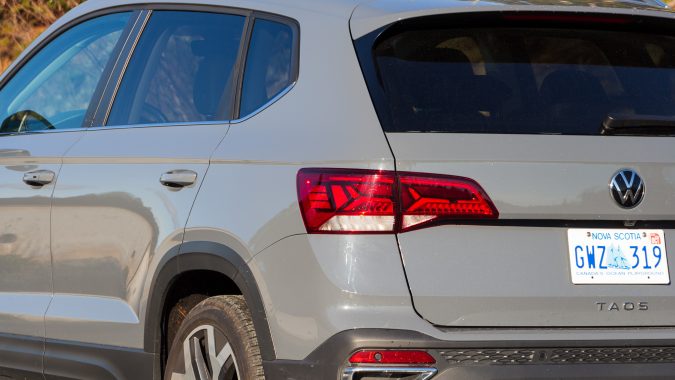 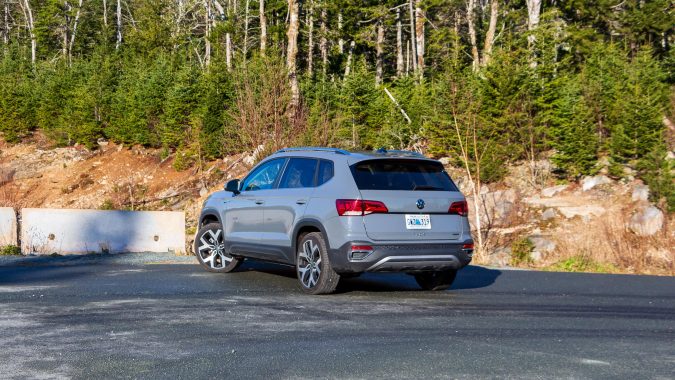 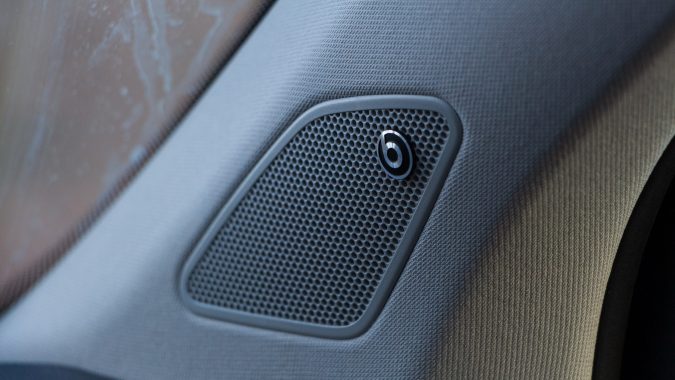 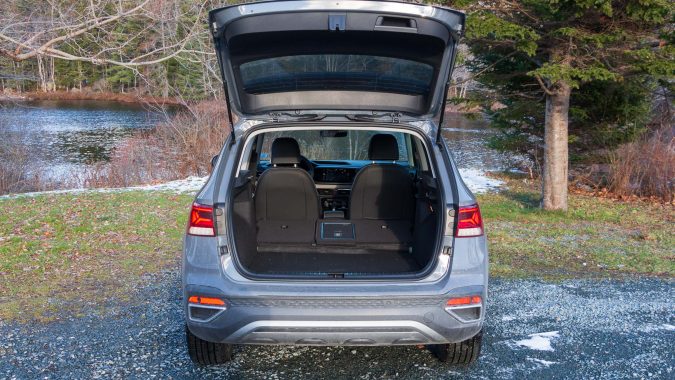 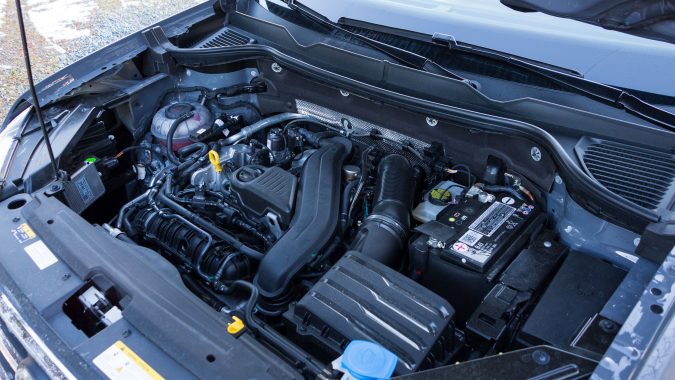 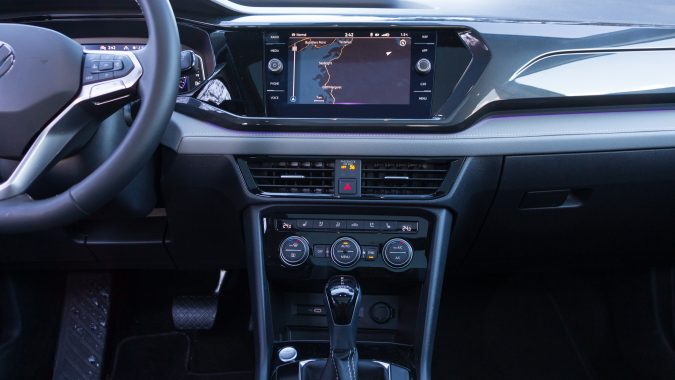 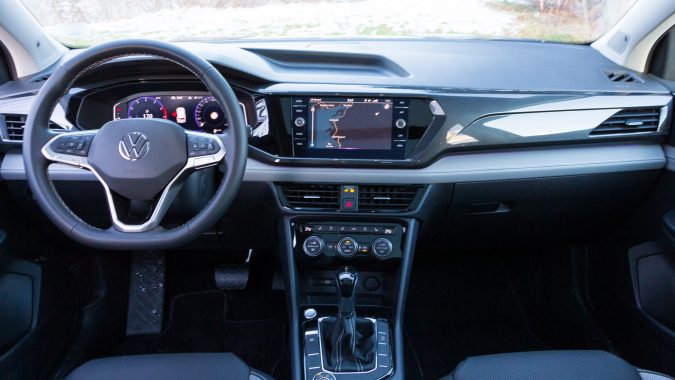 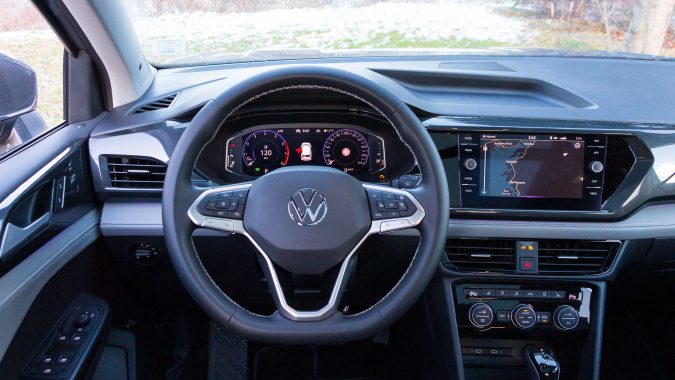 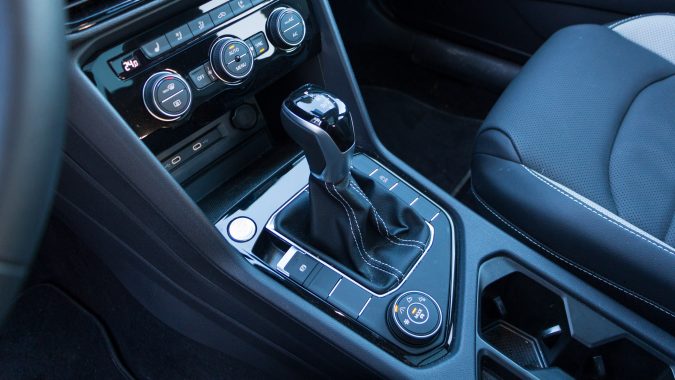 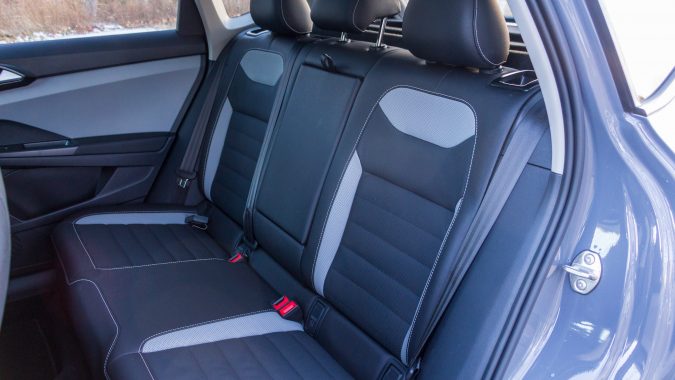 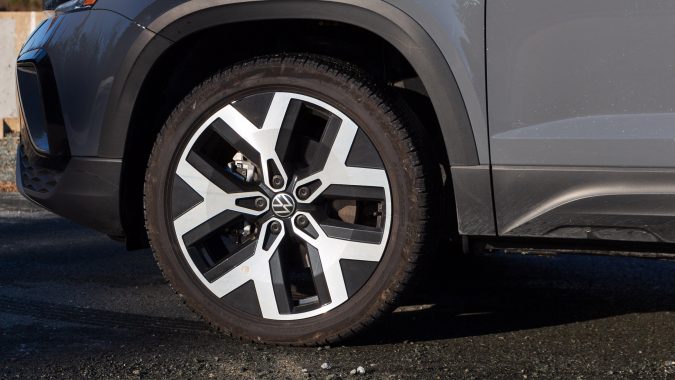 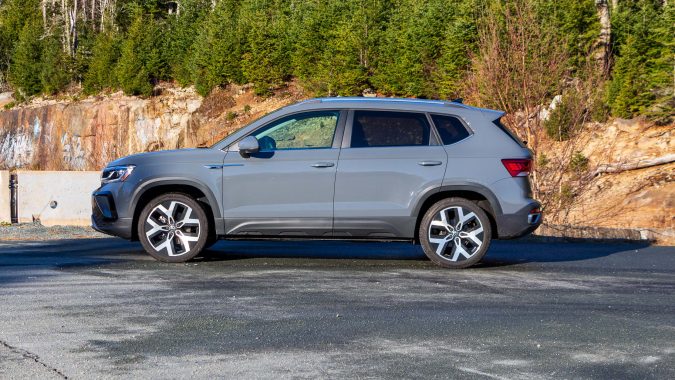