Big in every sense

As much as they don’t fit my lifestyle, big SUVs have their place as I’ve learned during time spent testing and writing about cars.

Yes, their enormous proportions, massive turning radii and thirsty fuel consumption can be off-putting, as is their propensity to block outward views of smaller vehicles in traffic, but they are not without their strong suits.

Their beefy powertrains and cavernous interiors can make them quite useful for hauling passengers and their stuff, as those with big families and / or trailers will surely attest. So, while the fuel-sipping Chevy Trax is easier to park, it can’t tow a boat. But it’s big-bodied Tahoe sibling sure can.

To reset, the Tahoe, along with the other big GM SUVs (Escalade, Chevy Suburban and GMC Yukon) are all-new for 2021. All are built in Arlington, Texas on GM’s full-size pick-up truck platform and share a basic architecture and powertrains. Each carry unique styling, however, and are targeted at different customers. The Tahoe has been around since 1995, with 2021 marking the beginning of its fifth generation. The oldest, in case you’re wondering, is the Suburban which began in 1935! 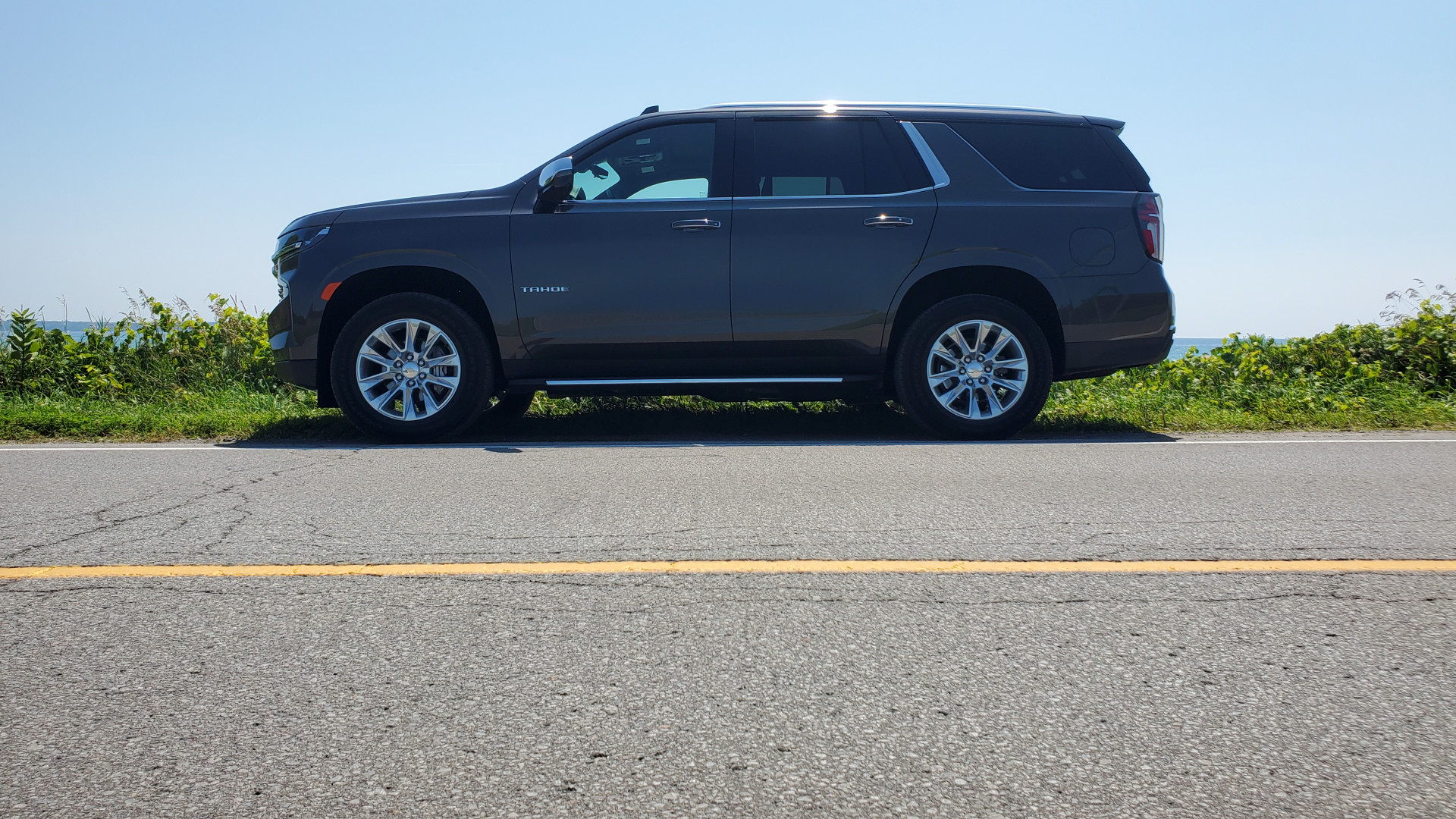 As the (slightly) smaller Chevy in the group, the Tahoe carries a lighter price tag than those affixed to the Escalade, Suburban and Yukon, but it’s far from a cheap vehicle as the Canadian grade walk makes clear. There are six models, starting with the base LS ($56,498 – 2WD), running through to the range-topping High Country ($80,898).

Three engines are available for the Tahoe, two gas V8s and a turbo diesel inline-six. The standard engine across the range is GM’s venerable 5.3-litre V8 (355 hp / 383 lb-ft), save for the High Country, which is equipped with a 6.2-litre V8 (420 hp / 460 lb-ft). The 3.0-litre Duramax diesel (277 hp / 460 lb-ft) can be ordered for all models except the off-road Z71, which comes with the 5.3-litre only. As for gearboxes, all engines are paired with a 10-speed automatic. Two-wheel drive is limited to LS and LT grades, with all trims beyond those equipped with standard four-wheel drive. 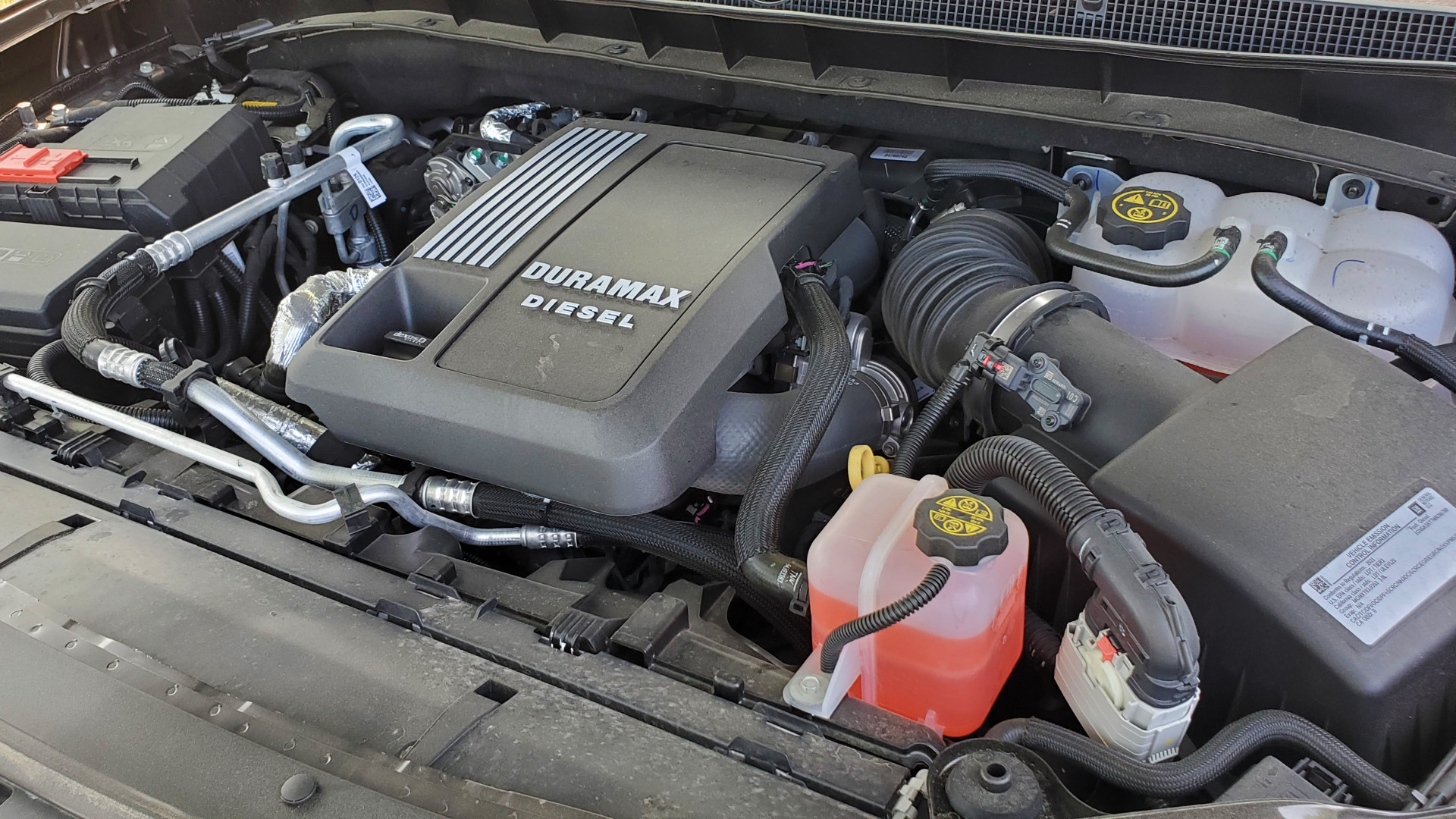 Dimensionally, the fifth-generation Tahoe is noticeably longer than its predecessor. The wheelbase has grown by 125 mm (4.9 inches) and overall length has increased by 169 mm (6.7 inches). As a result, big gains have been made in passenger and cargo space. The load floor has been lowered significantly, which has not only improved maximum cargo space (up by 30 per cent) but increased third row legroom substantially (by 254 mm / 10 inches).

For the purposes of this review, GM Canada set me up with an upper-grade Premier tester finished in Graywood Metallic with a Jet Black perforated leather interior. Several option boxes have been ticked, the most notable of which is the 3.0-litre Duramax diesel engine ($3,245). Other extras include the Premium Package ($5,100), which comes with a panoramic power sunroof, rear camera mirror washer, rear camera mirror and integrated trailer brake controller, and Rear Seat Media system ($2,295). 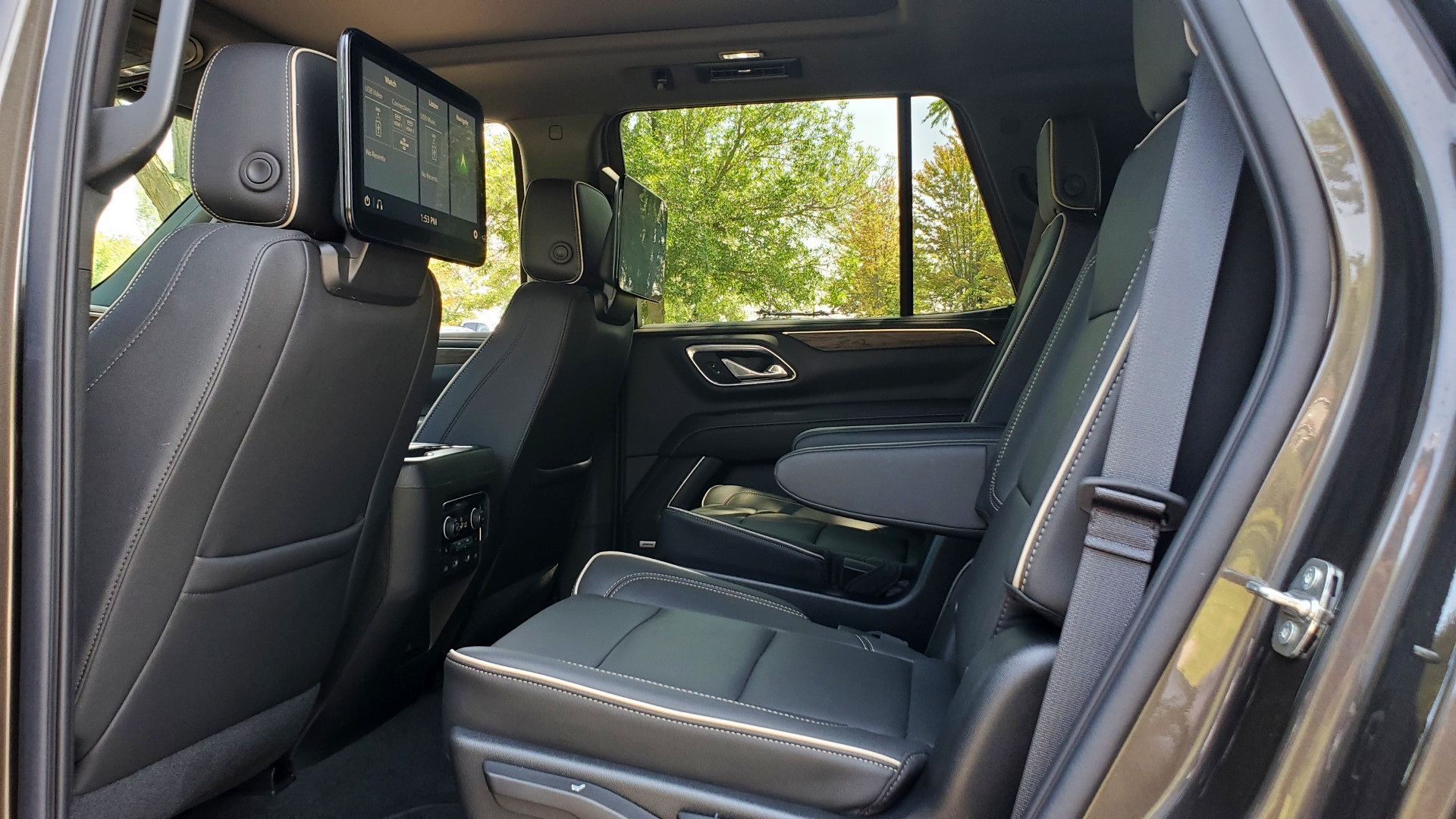 I’ve said before that the sheer size of vehicles like the Tahoe tend to have a flattening effect on design. It can be difficult to make something so large appear visually interesting because vast proportions tend to obscure design language – size is all that most remember.

That said, the Tahoe is handsome thanks in large measure to Silverado design cues at the front and a rear that features surprisingly detailed LED taillights and just enough brightwork to give it a bit of extra style. Despite being all-new, the exterior changes are iterative, which I think will please existing owners as they don’t depart too much from the familiar. 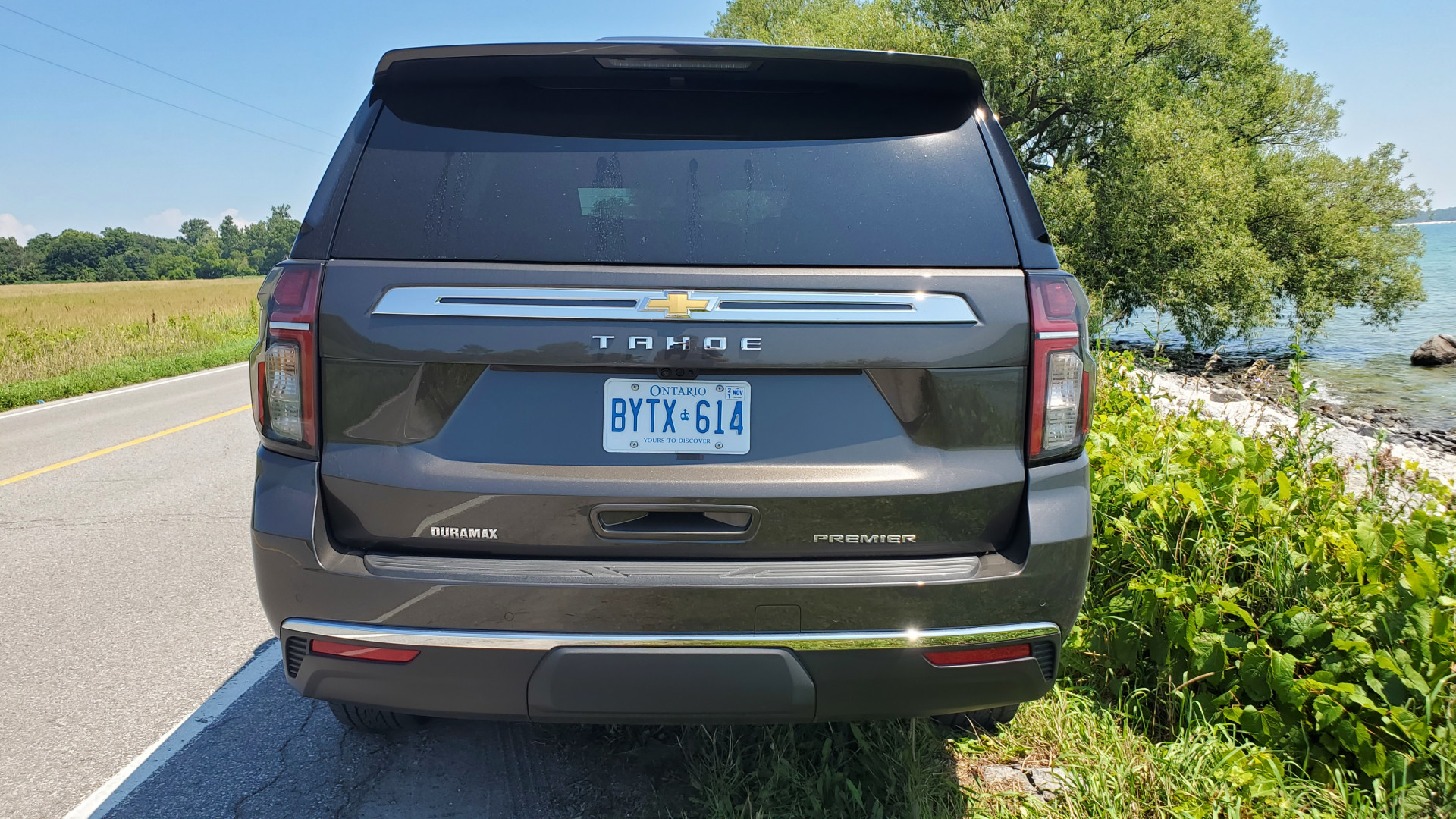 On the inside, the Tahoe offers up acres of useable space (3,480 litres behind the first row), with seating for up to nine, along with good outward visibility and a comfortable driving position. For long trips, especially with a lot of people and cargo, this is the way to go. My tester’s second row Captain’s chairs feel ideal for a long trip, and the extra legroom in the third row is impressive. I’ve stuffed myself into the third row of older Tahoes before, and none were as comfortable as this one. Not ideal for adults on long trips perhaps, but fine for shorter ones.

From an equipment standpoint, my Premier tester feels quite luxurious. Standard heated steering wheel, heated and ventilated front seats, embedded navigation, wireless Apple CarPlay and Android Auto and wireless charge pad, are among its many cabin amenities. In addition, the driver and front passenger seats are power-operated (12-way), as is the tilting and telescoping steering column and the centre sliding console, a lockable storage option for valuables. Physical controls and switches are not over-abundant and need no explanation regarding their function, and the 10.2-inch multimedia touchscreen works beautifully with easy smartphone pairing. 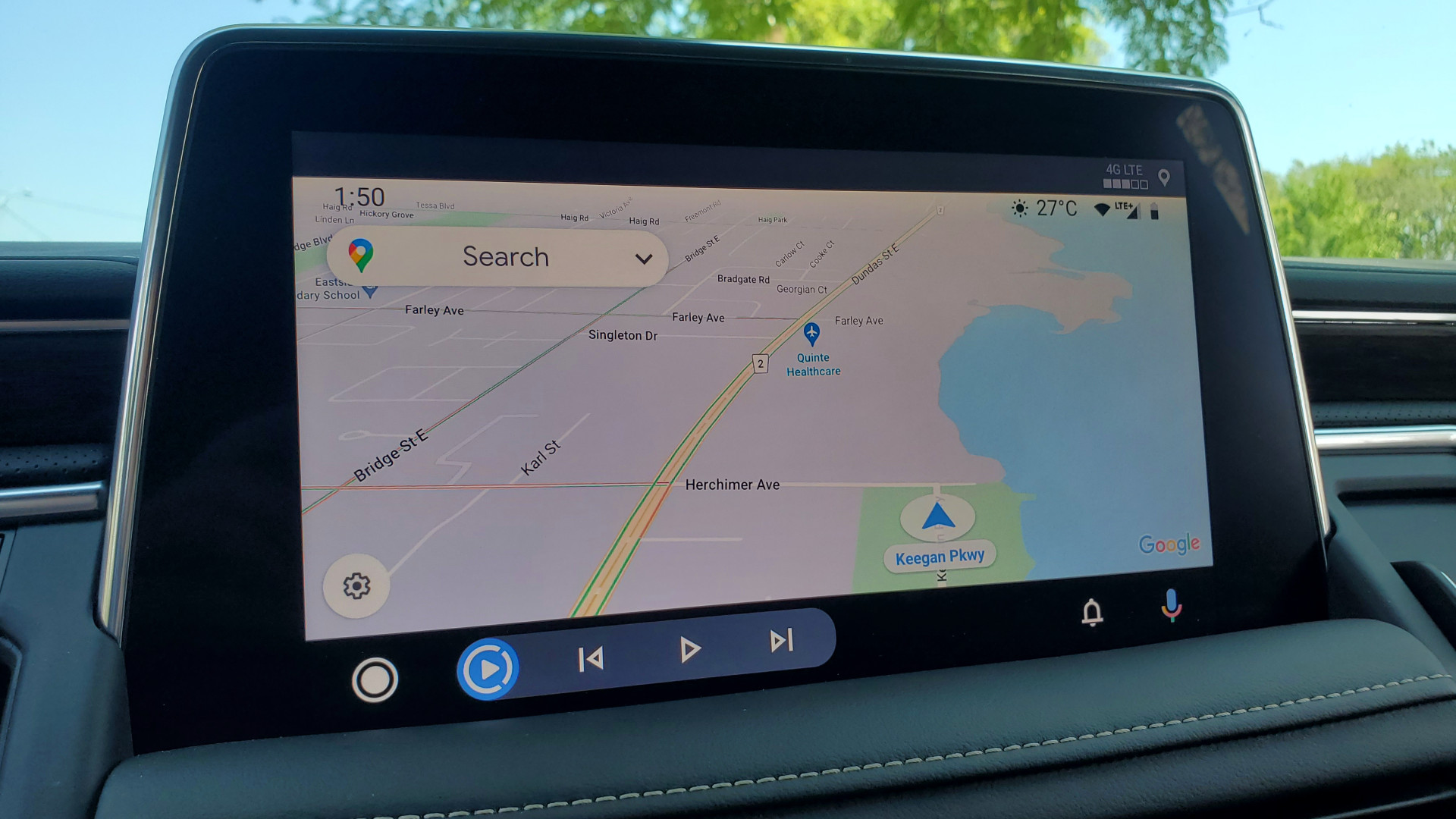 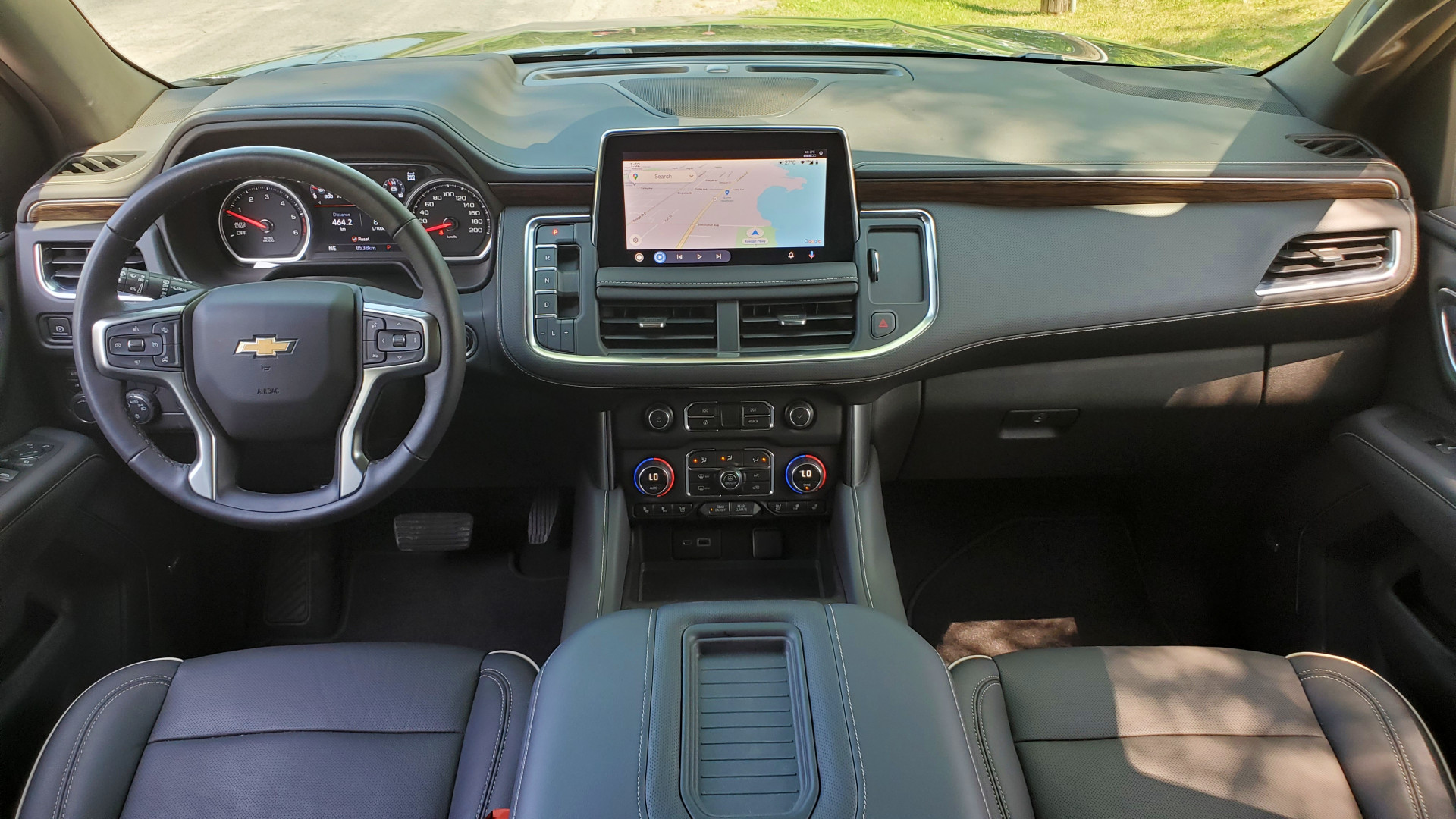 Because I had to attend a press event in Kingston during my week of driving, I put more mileage on this Tahoe tester than I normally would otherwise. I neglected (oops!) to record the totals, but it was in the 700 km range. A few things stuck out during my trek. Firstly, the Duramax diesel returned excellent fuel consumption with an average that moved between 8.3 and 8.5 L / 100 km.

Second, the diesel offers smooth, if not neck-snapping acceleration and quiet operation. I logged a lot of highway kilometres, and the Duramax proved to be no louder than the gas V8s I’ve experienced in other big GM SUVs. Diesel ‘clatter’ is noticeable at idle and while accelerating and driving at lower speeds around town, but it’s not oppressively loud. At no time did I feel like I was driving a school bus.

Third, even with diesel, fill-ups are still expensive. It took almost $100 to fill the Tahoe up thanks to its 91-litre tank, but diesel is usually a few cents per litre cheaper than gas, plus, as mentioned, there are efficiency gains to be had. I get it, diesel is a dirtier burn than gas, thus is worse for the environment but the efficiency gains are there all the same.

Bottom line, the Tahoe is a vehicle that comes with trade-offs. It can be expensive to own, to operate and annoying to park, but it can also haul a lot of people and stuff and sometimes an 8,000-pound maximum tow rating comes in handy.

Do most consumers, even those with big families, need a Tahoe? No. But it’s an attractive option if the utility part of SUV really matters. 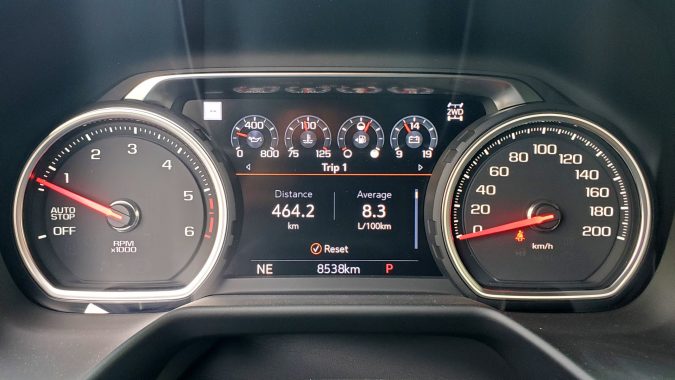 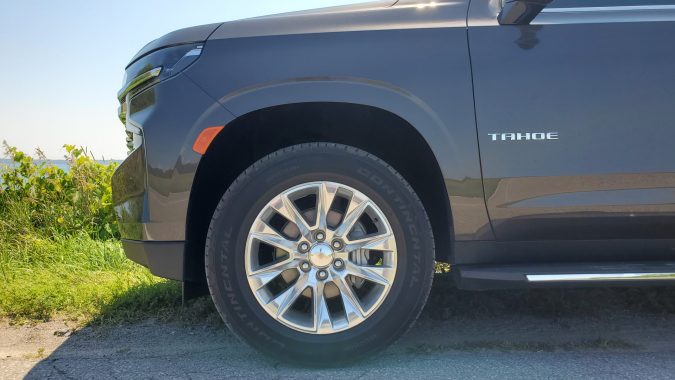