It may lack the edginess of earlier Scions, but it’s a solid move as the brand finds the right balance between what’s hip and what sells.

We Canadians love our hatchbacks, and the automakers that build them typically offer product that sells in big numbers.

With a few notable exceptions.

Namely Scion that launched here in 2010 with a three-hatch lineup: the underpowered xD subcompact, the sporty two-door tC, and the uber-boxy xB that somehow clicked with the tuner crowd.

I won’t knock the tC. It continues to be neither conventional nor ubiquitous, yet has much going for it on a variety of levels.

The now extinct xD won’t be missed. And the xB, or “toaster” as it’s often referred, may be both practical and a blank slate for customization, but never gained much traction.

Quirkiness at the expense of low volume has never made good business sense, so Toyota’s hipster youth-oriented brand that eschewed the ordinary has finally gone mainstream. 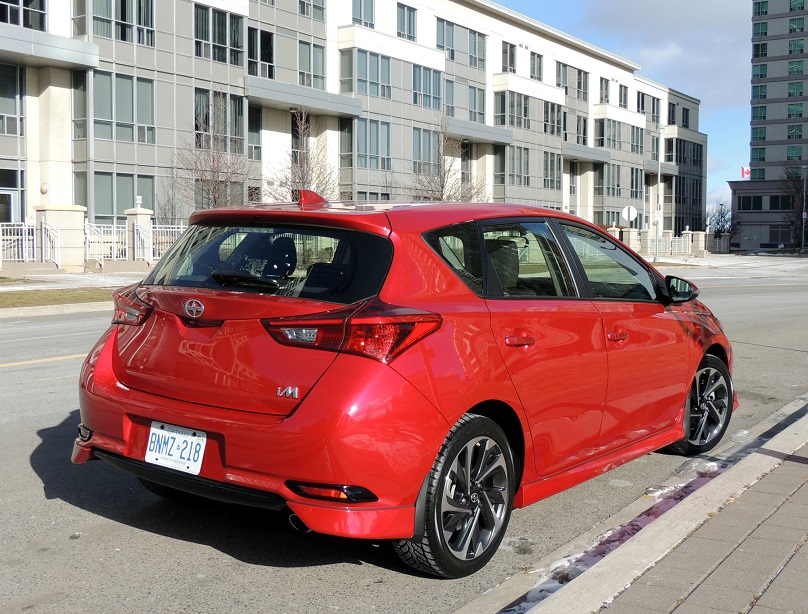 The 2016 Scion iM – my tester for the week – debuted at the 2015 New York Auto Show and arrived at Scion dealerships this fall, which now number 145 in Canada.

It features a crisp wedge profile with sharp creases, along with a sporty aero kit that visually lowers the vehicle. Wheels pushed to the corners enhance its ground-hugging appearance.

From the front, the iM’s hexagonal lower grille and sharp-eyed headlights are a nod to the FR-S sports coupe. LED daytime running lights and taillights come standard, as do 17-inch alloys that nicely fill the protruding wheel arches. 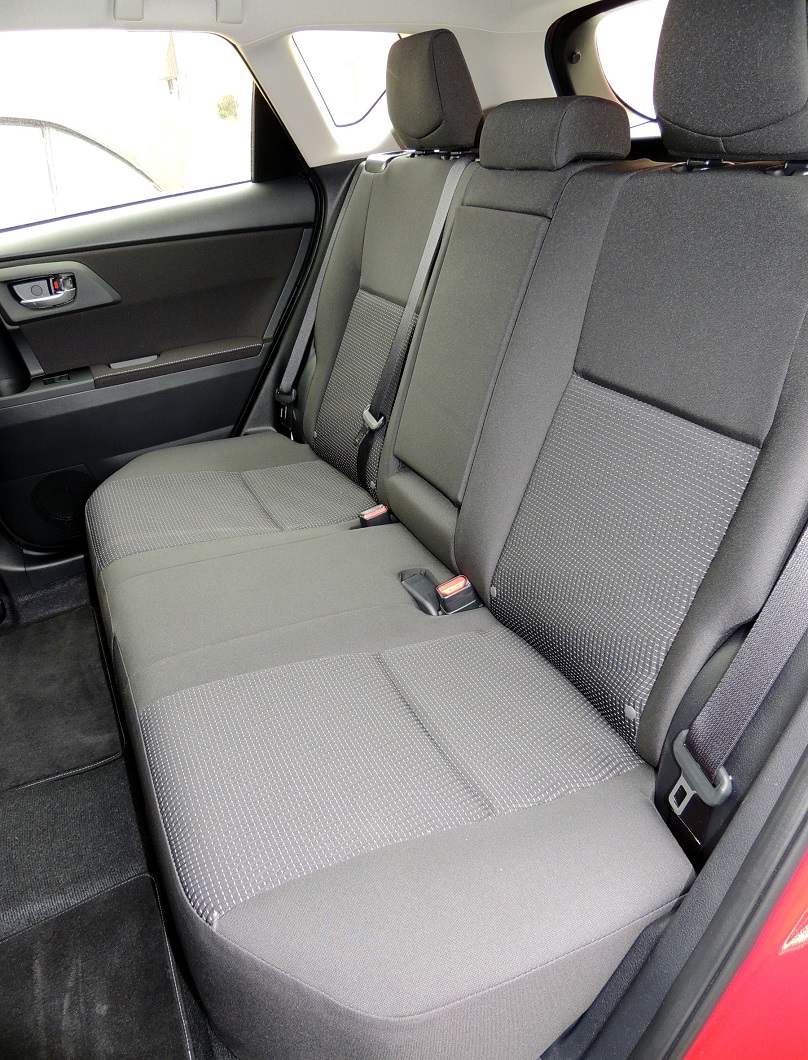 Indeed, the iM looks sporty, but the design team hasn’t done anything over-the-top. Which I’m sure is a relief to the marketing department, and dealers, who were hoping for something with more mass appeal.

No surprises either in the powertrain.

It’s a 1.8-litre four-cylinder that delivers 137 hp and 126 lb/ft of torque. It is mated to either a six-speed manual transmission or, as tested, a CVT with Sport mode.

In regular drive mode, the transmission winds up like most CVTs, and is noisy under hard acceleration – despite sound deadening efforts that include an acoustic windshield, foam insulation and floor silencer sheets. 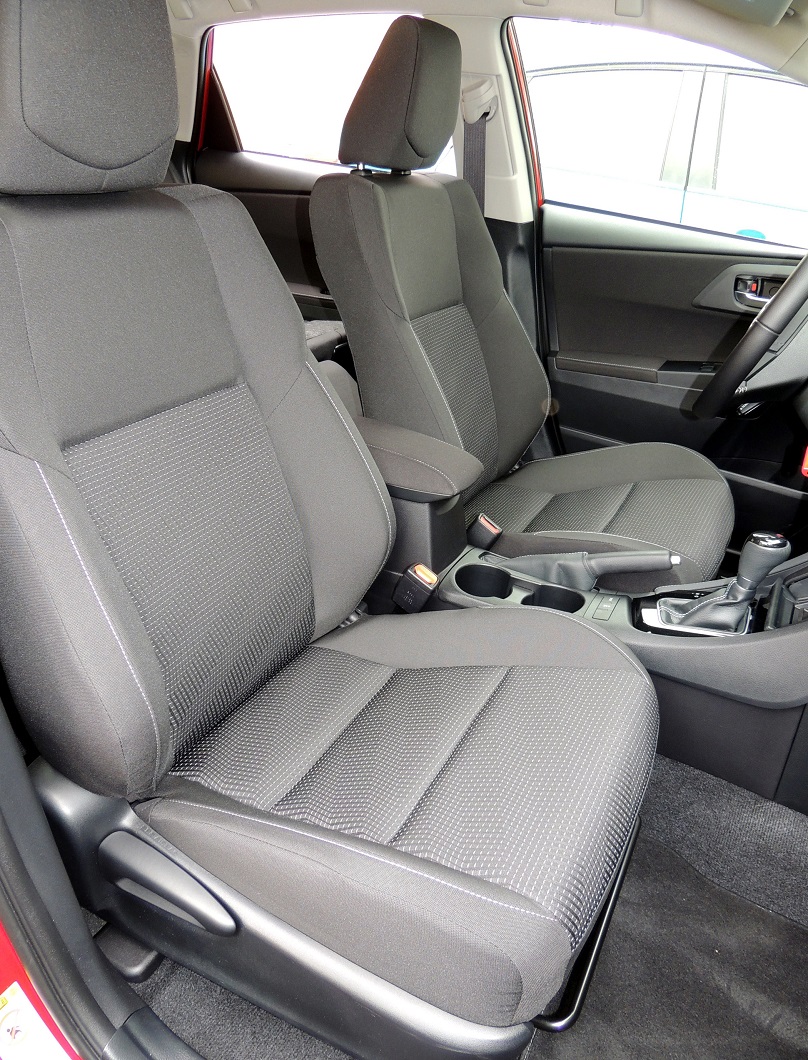 Slide the gear lever into manual mode, and you can row through the virtual “cogs”, with gear position displayed in the 4.2-inch multi-info display.

Takeoff isn’t neck snapping, but once the CVT gets spinning (around 50 km/h or so), the iM accelerates briskly. Tap the gear lever, and shifts are surprisingly rapid-fire.

Another neat trick is the G AI-Shift logic that measures lateral G forces during cornering. If it senses you’re powering through a turn, it maintains engine speed by limiting shift changes – keeping torque closer to the “sweet spot.”

Inside, fit, finish and materials are somewhat better than expected at its monospec price of $21,165 with six-speed manual and $21,990 with CVT as tested. Like other Scions, the iM comes as a single “all-in” model, with the opportunity to personalize with upgrades, graphics and accessories.

But other than the absence of heated seats, I couldn’t find much lacking in the base package.

There’s an abundance of soft-touch surfaces throughout the passenger cabin, much of it nicely “leather grained,” such as in the dash and upper doors that also feature fabric panels. Not much hard plastic here. 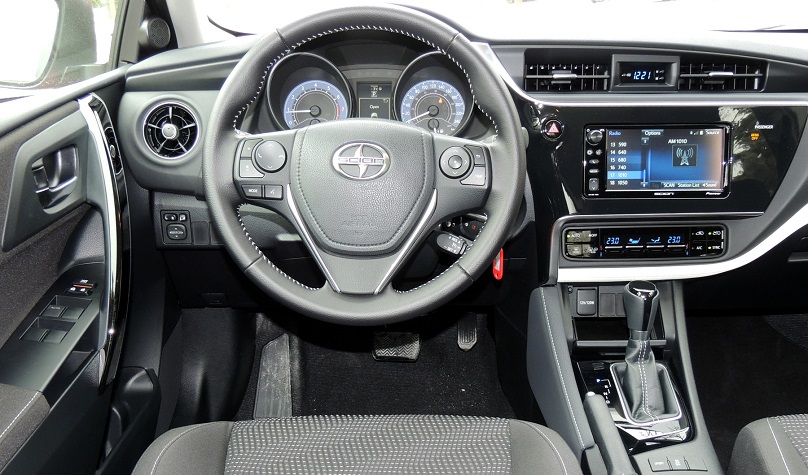 The centre stack, with its Pioneer audio system and seven-inch touchscreen, is clad in piano black with satin aluminum trim. Beneath is a nice strip of cream-coloured soft touch to break up the abundance of charcoal.

Seats are upholstered in an attractive grippy fabric with bolstering to hold you in place. The shifter knob is leather wrapped, as is the steering wheel that is tilt/telescopic with cruise and audio controls.

The iM is also equipped with dual-zone climate control and backup camera – unusual at this price point.

There’s a range of dealer-installed upgrades that include a Bongiovi DPS Acoustics system (although the standard six-speaker Pioneer is plenty good), interior light kit and navigation. Regarding the latter item, I’d suspect that much of Scion’s youth demographic are already using their smartphones for this.

Back seats are reasonable roomy, with decent head and legroom for those of us six feet and under. The centre position drops for an armrest with cupholders, and this 60/40 split bench folds flat to expand the 588-litre cargo space. 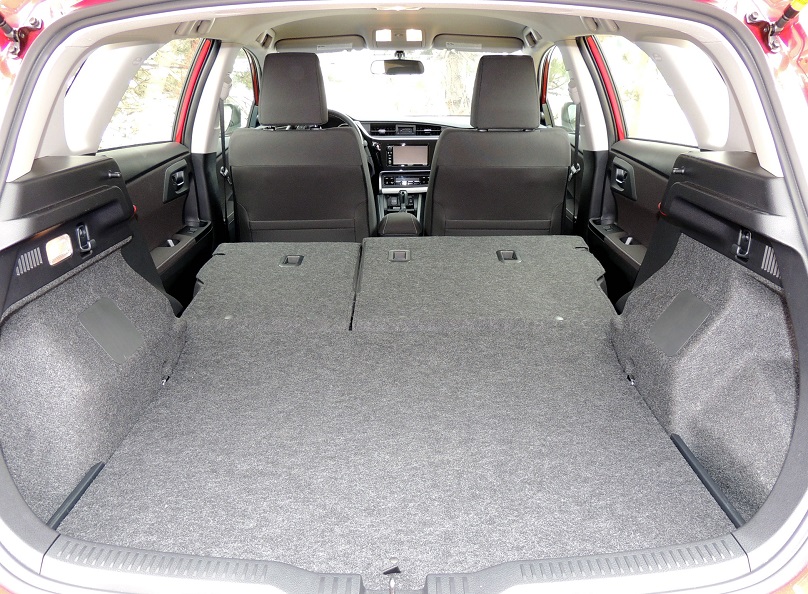 This isn’t always the case among $20K hatchbacks, and is a welcome feature when you’re sliding in lengthy signboards and boxes, as I did to prepare for a recent event.

In the iM, Scion now offers a model that can compete with Ford Focus, Mazda3 and Elantra GT.

It may lack the edginess of earlier Scions, but it’s a solid move as the brand finds the right balance between what’s hip and what sells.