A 2.0-litre turbocharged four-cylinder that delivers 240 hp and a stout 260 lb/ft of torque

Gone is Sorento’s dreadful cladding from the first-generation, and the timid grille of the second.

The all-new 2016 model raises the styling bar with a look that some describe as German, although I’m more inclined to say Swedish. It’s a nod to Volvo’s XC 90, which for me is high praise.

The new sheet metal is cleaner than its predecessor, with stronger shoulders, a high beltline and narrow side glass that may not help visibility, but looks handsome nonetheless.

The new grille gulps rather than sips at the oncoming air, flanked by narrow-cut projector headlamps for a bold first impression.

The wheelbase is now longer to allow for more interior room – a key consideration in this segment. Mid-size crossovers need to be efficient at carving out space when they offer a third row. 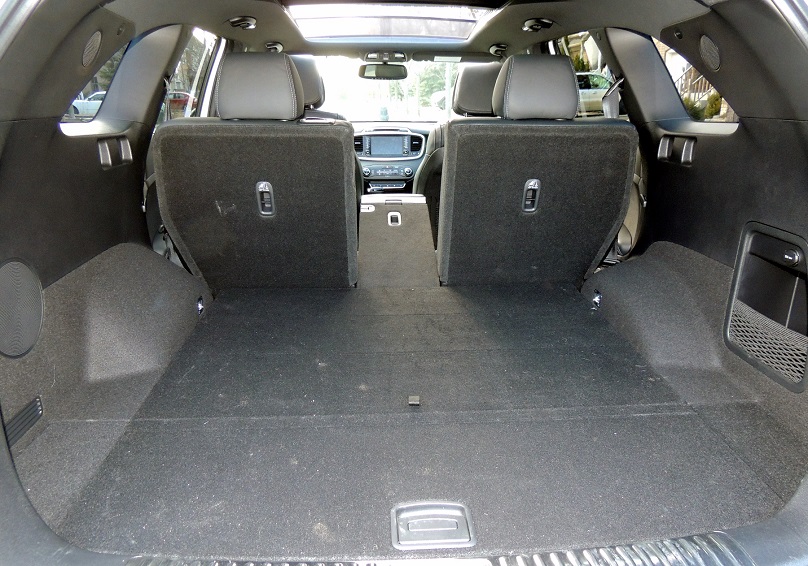 Sorento comes not only in two- and three-row models, but offers both AWD and FWD in several trim levels. And there’s a choice of three engines.

New for 2016 is a 2.0-litre turbocharged four-cylinder that delivers 240 hp and a stout 260 lb/ft of torque. All engines are mated to a six-speed automatic transmission. 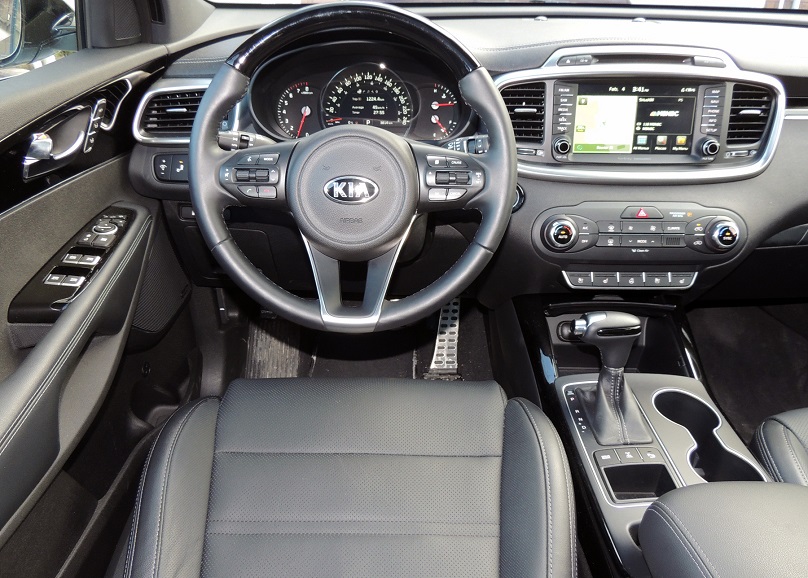 My tester – the SX Turbo AWD – had the latter powertrain, which easily handled its two-ton curb weight.

Peak torque begins at an early 1,450 rpm for good takeoff, and with the drive mode set to ‘sport’ (which sharpens throttle response, delays shifting and increases steering effort), the Sorento is surprisingly nimble.

The LX with 2.4-litre engine and FWD starts at $27,495 and comes with a pile of standard content, which to the credit of Kia and their corporate cousin Hyundai, has been common practice in their base vehicles. 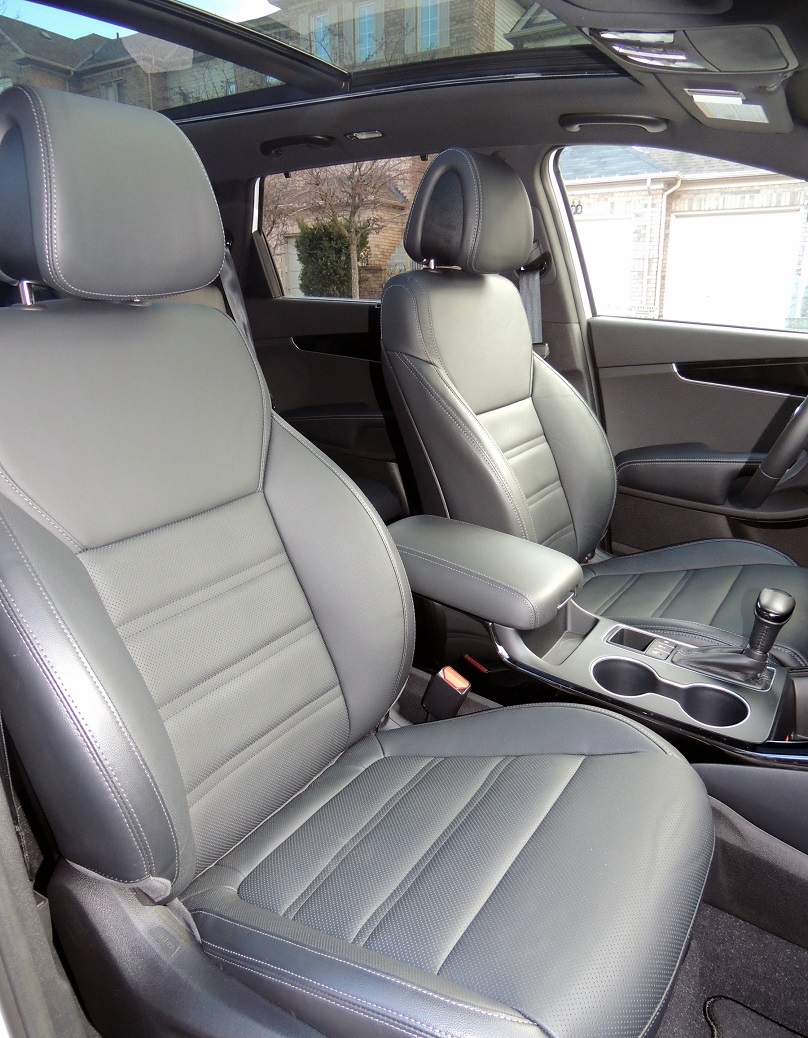 Of course, Kia’s PR team wanted to showcase Sorento at its best, so my ride lacked little in terms of amenities, tech and premium content.

The SX Turbo AWD rides high on 19-inch alloys and even comes with stainless steel skid plates for those who venture off the asphalt and on to cottage roads.

It also gets premium leather seating, heated/cooled with 8-way power adjust for the front passenger, and 10-way (with memory) for the driver. 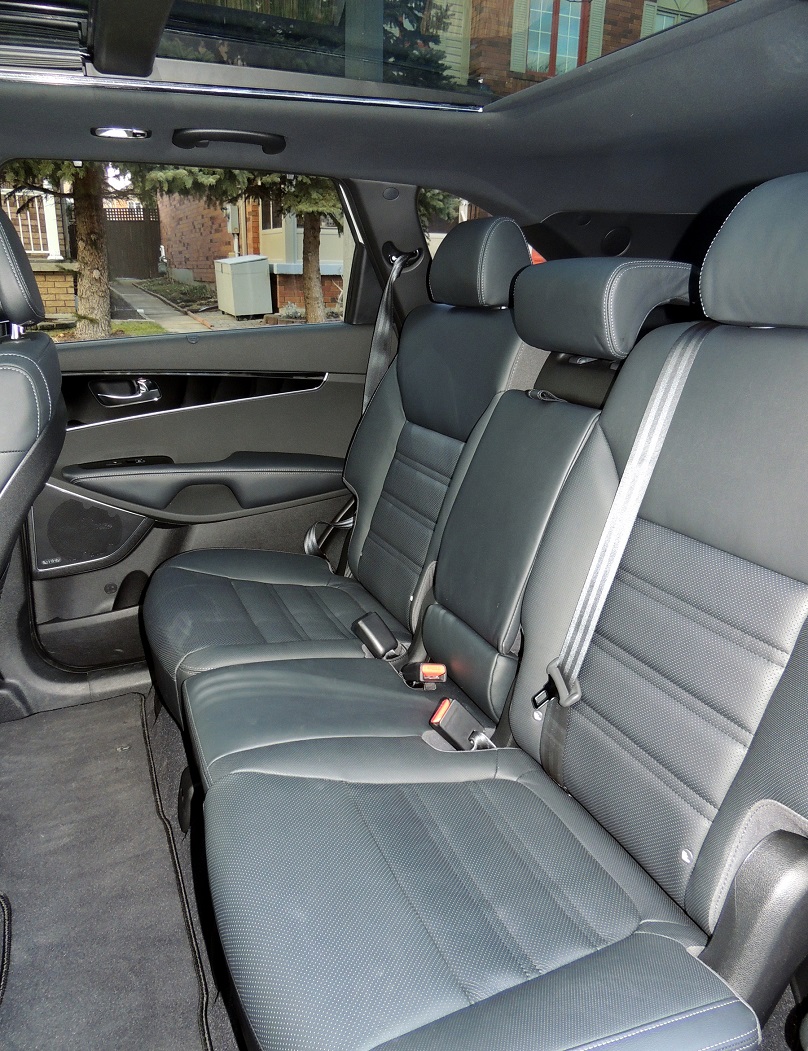 Second row 40/20/40 seats are also heated in the outboard positions, and offer loads of head and legroom for up to three full-size adults.

The tradeoff in not having a third row was its copious underfloor storage. Beneath the entire cargo deck were right-sized compartments, ideal for laptops and other electronic gear – not only to hide, but also keep things from sliding around.

Accessing the cargo hold is made easier in top-trim models via the available “smart” power tailgate. You no longer have to wave hands, feet or do the hokey-pokey. With the smart key in pocket or purse, just stand behind the hatch and it opens. 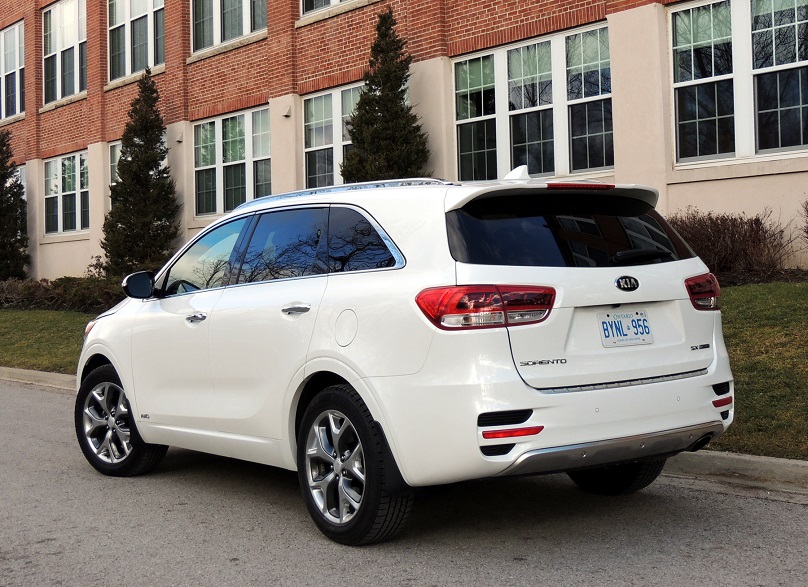 After a couple of warning beeps, of course, so you don’t get whacked by the door.

The interior is not only more upscale than past Sorentos, but quieter thanks to sound-deadening efforts, along with an increased use of high-strength steel, more structural adhesives and advanced welding techniques.

Kia, like most automakers, isn’t afraid to toss around numbers. For example, 53 per cent of the unit body is now made of advanced high-strength steel, and torsional rigidity is up by 14 per cent. This may sound impressive, but it wasn’t until I hit a few bumps, potholes and ruts that I noticed how solid and well put together it felt.

Indeed, Kia has steadily been refining its product, adding not only more value in terms of content, but also in build quality. Case in point is their high J.D. Power ranking, with Sorento scoring top marks in its segment for initial quality.

All points to consider when shopping this crowded and competitive marketplace.

These were our favourite cars of 2021