All dressed up with somewhere to go sums up the 2018 BMW 440i xDrive Cabriolet on a perfect fall afternoon.

What a great autumn and what a great time to drive the 2018 BMW 440i xDrive hardtop cabriolet.

And that’s just what I did for something like 1,000 km in balmy, blue skies weather that made this one of the best falls I can remember.

When I owned a number of BMWs in the last century, it was pretty easy to chose between a 3 Series, 5 Series and 7 Series, with a sometimes available 6 Series coupe or 8 Series in the model lineup.

Today, you have the 1-7 Series cars and a slew of X Series sport trucks, with the 4 Series being relatively new in the BMW pantheon — all of which give buyers a host of alternatives, which was not the case in the past. 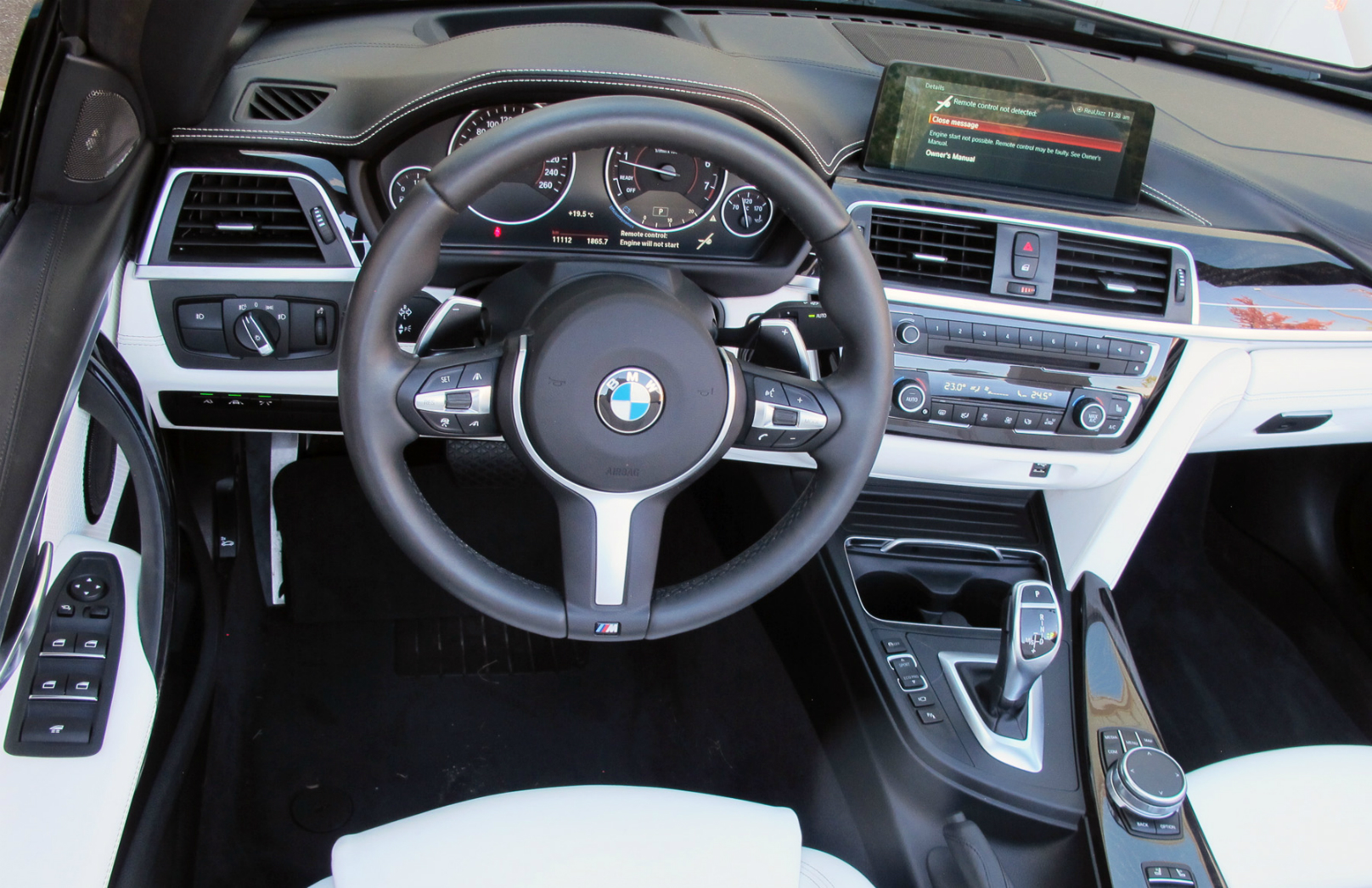 The new 440i with xDrive all-wheel-drive and eight-speed automatic transmission with paddle shifters tested here was turned out in an optional ($895) bright blue metallic paint, including the folding metal hardtop, that matched the skies perfectly.

The top goes up and down with the touch of a button on the aft part of the centre console and it fits snug and tight, as I found out going through the touchless car wash.

This is a compact car, so seating is really for two front and two rear and the rear is cramped for long journeys.

If you’ve ever owned a BMW in the past, you’ll find all the major gauges and controls in the same place, such as the large speedo on the left and tach on the right with smaller gas and temp gauges on each side. 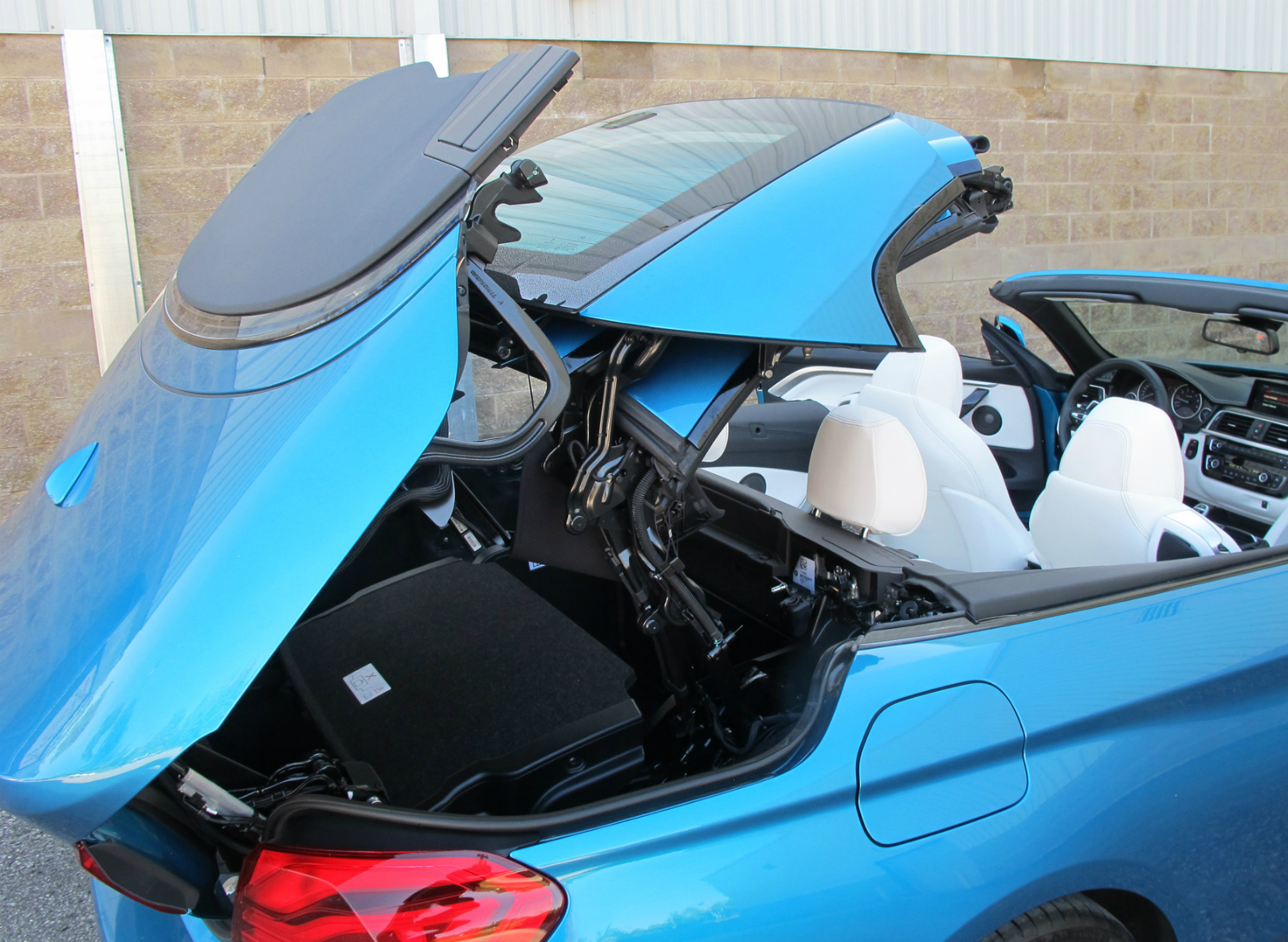 It’s ditto for turn signals and windshield wipers that are a finger length away from the steering wheel.

But unlike the 3 and 5 Series Bimmers I owned 35 some years ago, BMWs today are for the most part luxury cars, the 440i tested here being no exception.

After that come the option packages that were too numerous for me to list in this space, but the final tally was $90,485 not including the $2,245 destination fee.

So what to you get for that kind of money?

The answer is top down motoring at its finest and, yes, most connected.

Out of the box the 3.0-litre twin turbo, direct injection six-cylinder engine produces 320 hp and 330 lb/ft of torque. But dial in the optional ($2,900) M Performance Package 11 and you get the M Performance Exhaust and M Power Kit that pumps power up to 355 hp and 360 lb/ft.

BMW’s xDrive is justly seen as one of the best in the world and the eight-speed automatic transmission with paddle shifters does its thing transparently. 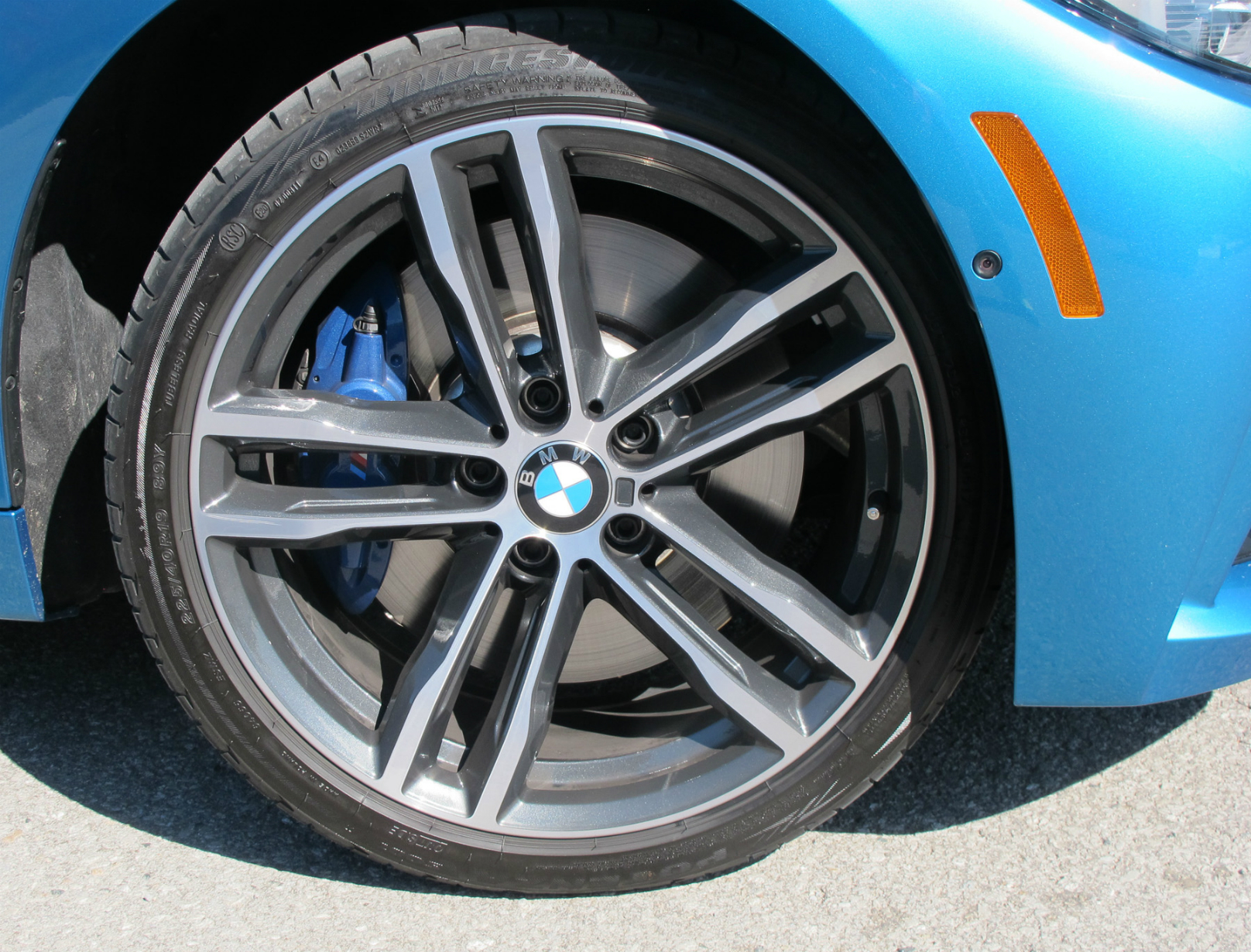 Gliding through southwestern Ontario with my good wife, we just sailed along even in the midst of that transport truck hell around Kitchener where you have to be nimble as well as quick.

Helping me out in that tricky spot was the ($1,900) M Performance Package (as opposed to the 11 package) that, besides bigger wheels and performance tires, included Variable Sports Steering and the Adaptive M Suspension which quicken steering input and speedier shock response.

Grip was the kind I could feel at my fingertips through the steering wheel and I never had to stab the gas pedal because the torque of the twin turbos was always on tap.

Cargo volume with the top up is 370 litres. But when the metal top in retracted, that space shrinks down to 220 litres, which is when the back seat comes in handy if you have a lot of luggage. 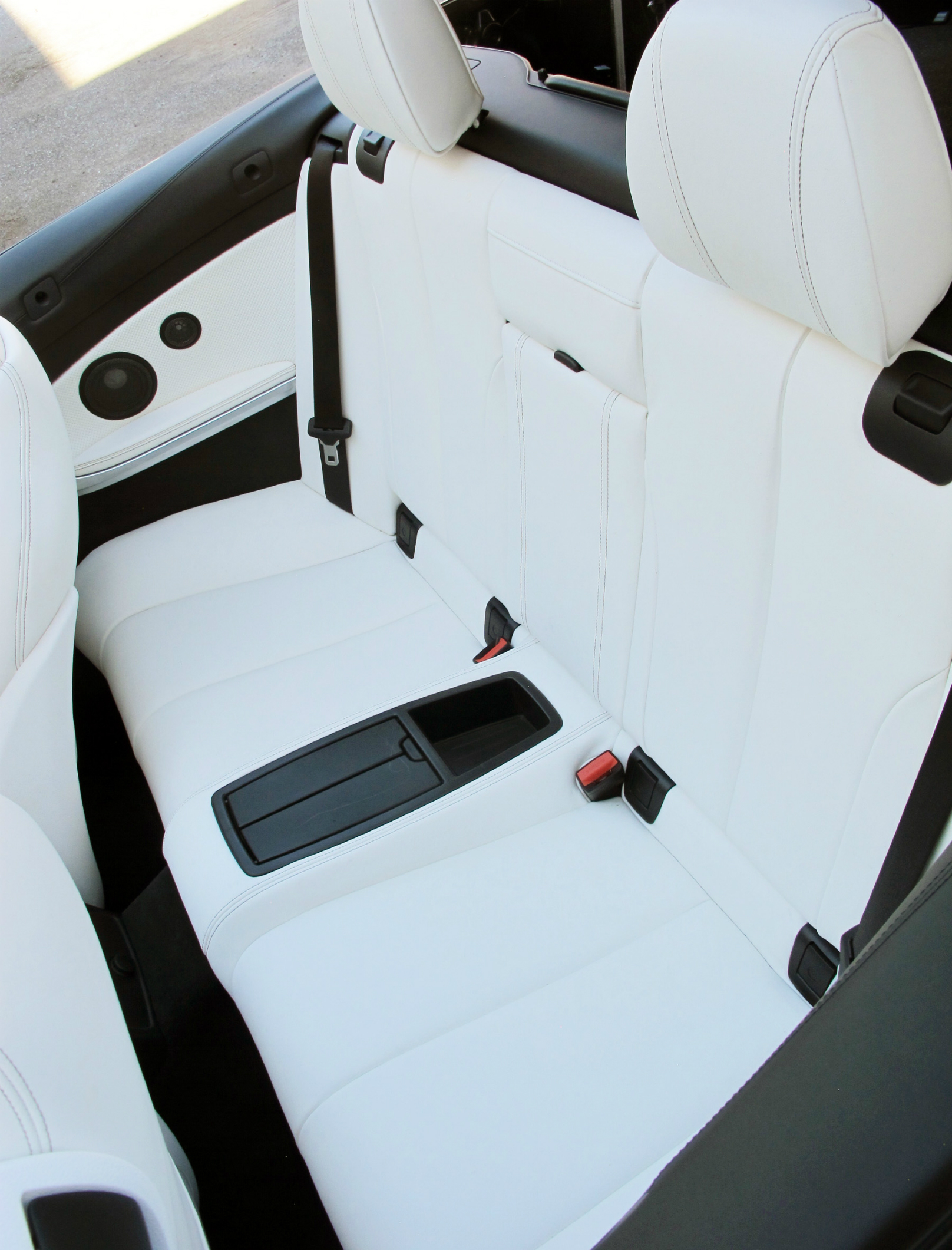 One last option was the $1,000 Adaptive Cruise with Stop and Go that really worked and by that I mean it unerringly gauged the distance between the car ahead and slowed or accelerated right on cue with measured braking and accelerating.

Supportive seats have always been a BMW strong point no matter what model you chose, but those on the 440i in an off-white leather were even good to look at.

BMW likes to say it builds the Ultimate Driving Machine and after a glorious autumnal week in the 440i Cabriolet I have to add, the Ultimate Top Down Way To Go.

Also Read: Kia is all in with the new Stinger 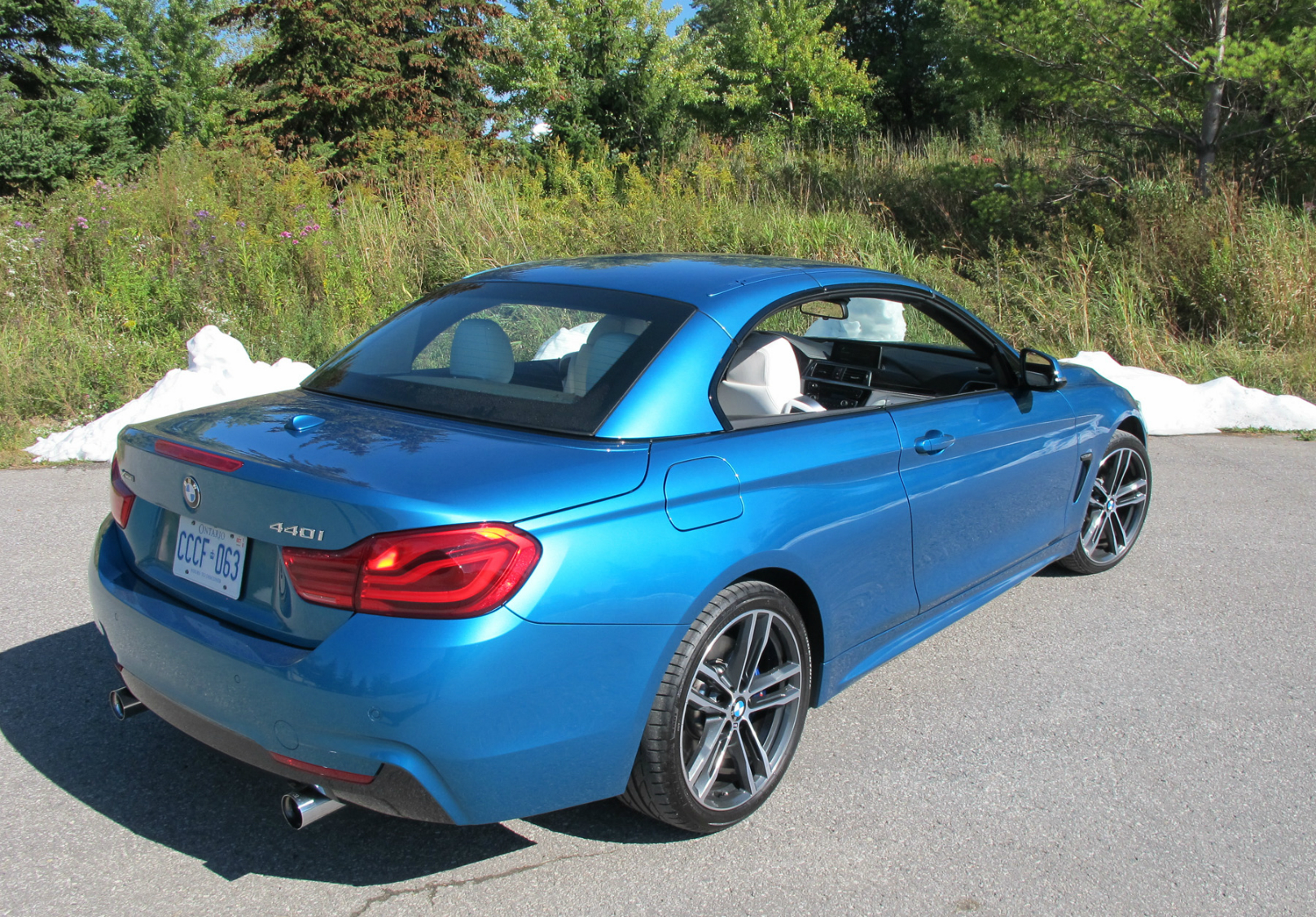