Not long ago, Acura reinvented its car lineup.

And it was none too soon, as the compact and mid-size models that should make up the bulk of sedan sales weren’t creating much buzz in Acura showrooms.

Indeed, the well-dressed Civic known as the CSX, and the capable, but otherwise tepid-selling mid-size TL were up against stiff Euro competition.

And the Lexus and Infiniti models in each of these segments were finding no shortage of takers.

I’ve reviewed the ILX (which replaced the CSX) and found it a worthy contender among premium compacts.

I had also driven the TL, and at the time found it more than capable in terms of driving dynamics (it even offered a six-speed manual!), yet it lacked the panache one would expect in this class.

So its mid-size replacement, which debuted as a 2015 model, had at least two boxes to check: 1) more premium styling to justify its $35K to $48K pricetag, and 2) maintain performance near its German rivals.

In terms of size, the new car has tighter proportions than the outgoing TL with shorter front overhangs, lower roofline and short rear deck.

But it does so on the same wheelbase, with no penalty on interior roominess.

The TLX is also more sculpted, with more character lines than its predecessor. 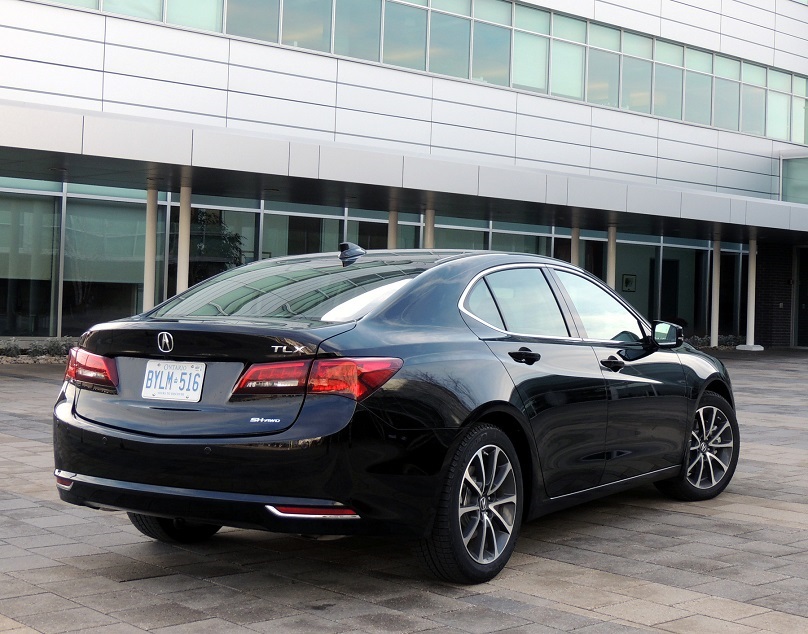 I never liked Acura’s signature “can opener” aluminum grille, but they’ve been toning it down over the years, and today, flanked by Jewel Eye LED headlights, it creates a sophisticated first impression.

This is complemented by large wheel openings over standard 17- or 18-inch alloys and ground-hugging fascia, giving TLX an athletic, although not cutting-edge, look. Which is fine, as those who would buy one aren’t looking for anything radical.

The entry vehicle is powered by a 2.4 litre, 16-valve i-VTEC four-cylinder that produces 206 hp and 182 lb/ft of torque. Transmission is an eight-speed dual clutch (with paddle shifters and rev-matching downshifts) sending power to the front wheels.

I may be old school, but still believe that premium mid-size vehicles deserve V6 power, or at least the equivalent from a turbo four.

On that note, my preference would be Acura’s 3.5-litre 24-valve six cylinder that powers the mid to upper trim TLX models. It produces 290 hp and 267 lb/ft of torque, and is mated to a nine-speed automatic with paddle shifters.

Although the extra cog is nice, the price jump from base or Tech FWD to the next three models is more than justified by the bump in power and the addition of drive to all four wheels – a feature that has become a no-brainer for so many buyers.

RELATED: The All-new Audi A4

My experience with Acura’s “Super Handling” all-wheel drive (SH-AWD) is as good as any I’ve had with competitors like Audi, Mercedes and BMW.

Admittedly, there was no snow during my recent week of testing, but prior experience bears this out.

SH-AWD routes power seamlessly where needed, using torque vectoring to self-correct. It’s a ‘nudge’ rather than a heavy hand.

In crappy weather, it intervenes just enough to keep you pointed where you want to go; ditto on dry roads where its presence is subtle but present on the twisties.

Key to this is Acura’s drive mode settings: Economy, Normal, Sport and Sport+. 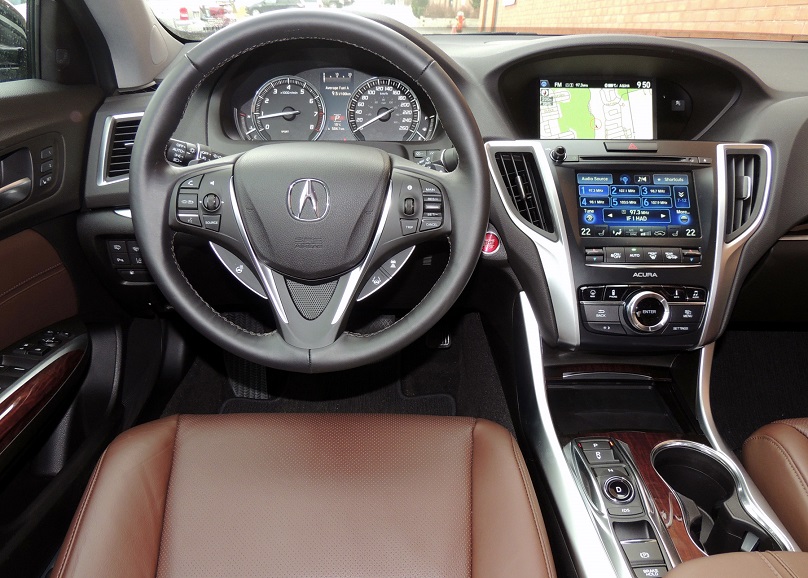 As you’d expect, Economy sucks the life from its powertrain, but the gentle takeoff and earlier shifts are ideal for snowy roads.

And it’ll save you a few pennies on petrol – especially with auto stop/start enabled, and the V6’s cylinder deactivation shutting down three cylinders when cruising.

‘Normal’ strikes a more reasonable balance between parsimony and pleasure, but I was more partial to Sport and Sport+. Needless to say, I didn’t match the TLX’s rated V6 fuel economy of 11.2/7.5/9.6L/100 km (city/hwy/comb).

But the quicker throttle response, later shifts and firmer steering are worth the sacrifice for those who enjoy motoring. Sport+ is even more aggressive, and when using the shift paddles, you’ll see an “M” beside each gear number in the LED display.

The passenger cabin of my Elite model was nicely fitted with grained soft-touch surfaces, wood inlays in the doors, dash and centre console, and satin aluminum accents.

Standard heated front seats (10-way/4-way power with memory for the driver), were also cooled on my tester, which included heated rear seats and ample legroom. All were upholstered in perforated brown Milano leather that was as comfortable as it was attractive. 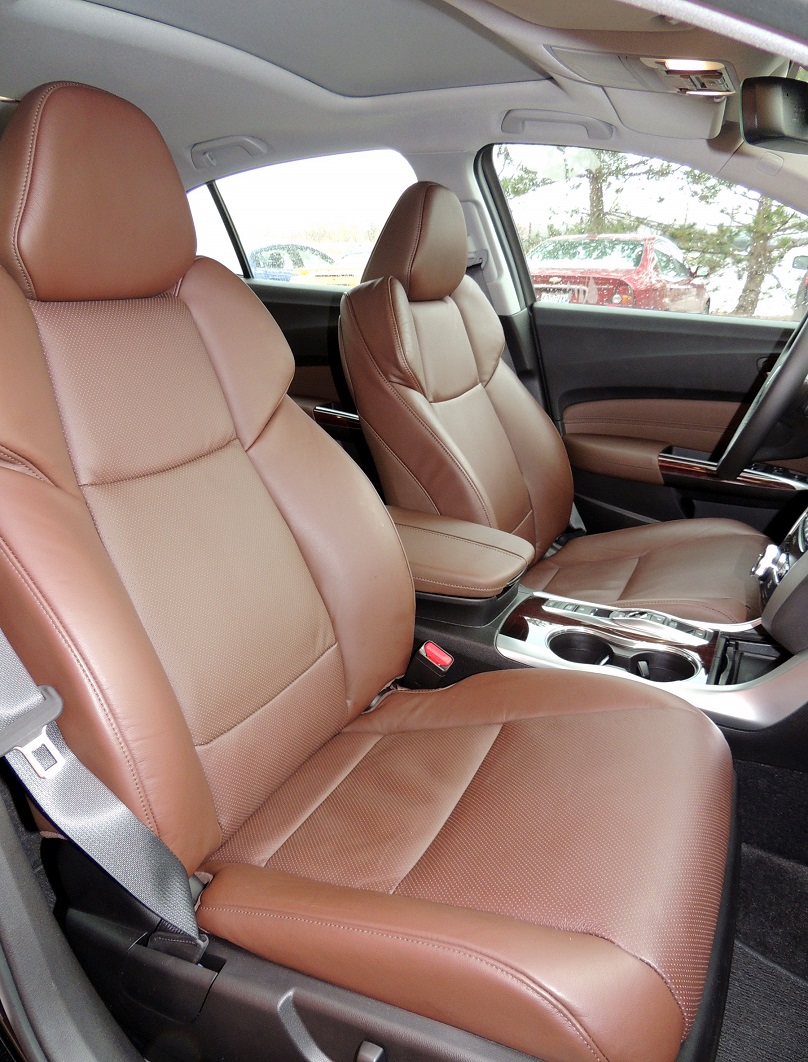 Other notable upgrades include the 10-speaker ELS Surround audio that comes in Tech trim and above, along with navigation and a pile of driver aids like blind spot information, cross traffic alert, forward collision warning, lane keeping assist and more.

My gripes are few, as I’m warming to push-button gear selectors and haptic touchscreens, although I found that displaying infotainment on both the upper and lower displays a bit confusing.

That aside, the TLX is a much-improved contender against the likes of Infiniti Q50, BMW 3 Series and Audi A4, and is worth a closer look by anybody shopping in this segment.