Super distinctive and impressive, The iconic sportscar is a great platform for modifications

When it comes to purchase decision-making, sometimes its driven by need; other times by want and the draw of a nostalgic and revered name.

Stephanie Huertas, of Vaughan, lives and breathes cars. The car enthusiast works as the office manager of a Markham-based supplier of performance auto parts, specifically aftermarket parts — such as tires and exhaust systems — for track-orientated vehicles. Huertas and her husband, Hirak Lagachu, also spend their spare time modifying their vehicles. When the pair aren’t working on their cars, they’re known to be out on the racetrack or at car meets, and hanging out with friends who share the same interest.

Being big car fans, the duo have daily drivers (a Nissan Rogue for Huertas, a BMW 335i for Lagachu), plus cars they use for the track, including their modified Subaru BRZ Inazuma Edition. Craving more horsepower, things came to a head with the BRZ leaving the duo feeling unsure if they wanted to continue investing in more mods, or change to a different platform. That’s when they heard rumours that Toyota was reintroducing the legendary Supra, famed for its iconic Mk4, which was discontinued in 1998.

The all-new generation’s redesign, however, was not what the couple were expecting; co-developed with BMW, the collaboration uses the same engine, parts, and platform as the German automaker’s Z4 roadster. Feeling slightly skeptical, the couple decided to wait; that is, until Toyota announced the A91 Edition. Limited to only 1,000 units, Huertas called Toyota’s head office and every dealership in the GTA inquiring about the unreleased vehicle. Four months later at Don Valley North Toyota, Huertas was the first in Canada to receive the 2021 Toyota GR Supra 3.0 A91 Edition in Refraction (an A91-exclusive blue hue). She tells us what she loves most about her vehicle and a little more about her addictive and expensive hobby. 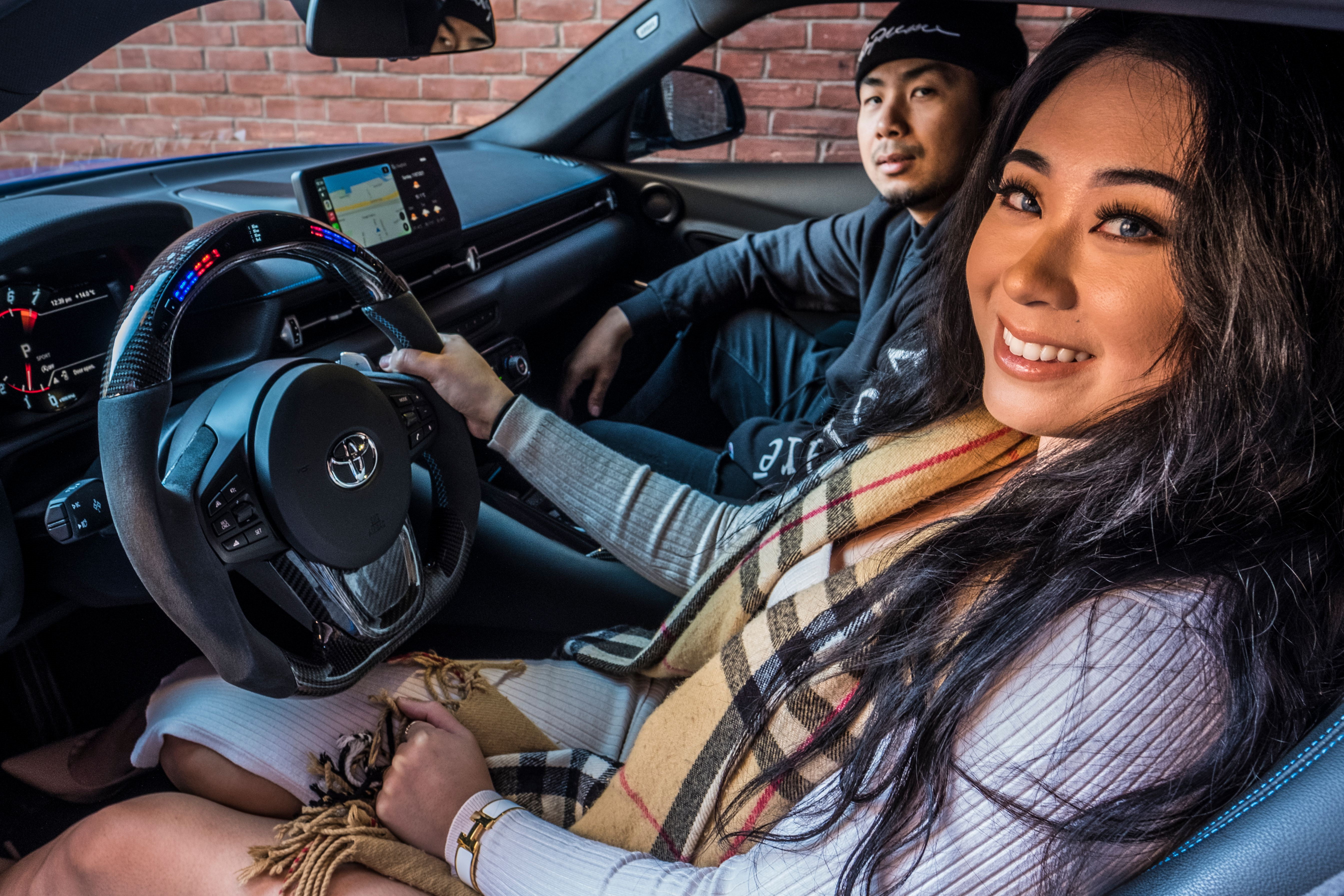 “We considered a lot of cars like a [Porsche] GT4,” said Huertas. “Our criteria were that it had to be nimble, handle well – especially coming from the BRZ which is really good on handling — and fun on the track. It had to be moddable, not just being able to do stuff to the car, but also have access to those parts. The Supra has a great foundation to mod, a great engine (B58), and one of the best transmissions out there.

“It’s probably the best car you can get at this price point; there’s nothing I can find on the market that handles the same way a Supra does. We paid a little more – around $4,000 – because we got the limited edition A91, and it was a special order. When we got the car, we were really happy with it because it’s not the kind of car you get to test drive before you buy. So, it was like fingers crossed and I felt like it didn’t disappoint us at all.

“The Mk4 (which was the Supra before this Supra) had this legendary engine, the 2JZ, that has a lot of respect in the track community. I don’t know if it’s because of the big following base, but it’s fun when people always compliment or recognize the car, you know? And it’s crazy, because when they first announced it, there was so much controversy because it was a BMW collaboration, and people were so upset that it wasn’t a 2JZ. But, when you see the car in person – and I’ve let people sit in the car, drive it or take it on the track – I’ve never heard anyone say anything bad about it. People just seem to really like the car. It’s just a really great platform.”

Asked about the modifications she’s added to her new whip, Huertas confessed that the duo enjoyed their A91 stock for the first half year before lowering it. They put on pricy BBS LM wheels (“It was a little ridiculous; I think the wheels were $7,000 and tires was another $2,000,” said Huertas) and added a carbon fibre steering wheel.

“Something that makes a big difference on the track is the car’s suspension and wheels,” said Huertas. “So, the first things we modded were the suspension, wheels, and brakes, just to be safe. It gives you better handling; it feels a little stiffer and you feel the car more.

“To be honest, we want to mod almost everything, but we wouldn’t change anything about the engine; tune it, at most. We have a big change coming: We ordered a full HKS Widebody kit – side skirt, front fender — and plan to add a Varis Wing, and an Eventuri intake system, so it’s going to have a new look.”

For those interested in modifying their cars, Huertas advises getting quality over quantity. “It can get overwhelming if you want a ton of stuff,” said Huertas. “Just take it slow and get the mods that you want, because all mods get really expensive. If you have a budget don’t try and cheap out because it’s noticeable on the platform.

“We considered it as a daily when we first got it, but now we really only drive it for occasions or for the track. It’s not something that we want to put a lot of mileage on. We baby the car a lot.

“I mean, I have no complaints about it. I love driving it. It’s a really great car and if people get a chance to try it, I think everyone will really like it.”

This article was edited for space and clarity. Want to be featured in Why I Love My Vehicle? email us at wheels@thestar.ca.

Renée S. Suen is a Toronto-based lifestyle writer/photographer and a freelance contributor for the Star. Follow her on Twitter: @rssuen

“It’s a BMW collaboration, so the Supra has all those luxury features that a BMW has,” said Huertas. “The quality of the interiors is a lot more luxurious than the BRZ. Besides a lot of carbon fibre interior accents, it comes with adjustable electronic bucket seats. It’s more comfortable and just a lot nicer.”

“The main thing I love about this car, if I’m going to be totally honest, is that it’s really pretty and it drives really, really well,” said Huertas. “So, it’s fast, it drives well, it handles well and it’s really pretty. I really like how the Supra looks esthetically. I know some people modify for track reasons, but if you do it just for the track, it becomes a little bit ugly.”

“The main difference between the BRZ and the Supra is the horsepower. The BRZ only comes with 205 horsepower, whereas the Supra comes with 382, and if you do a tune on it, you can hit 400 easy. The 2021 model also has a little more horsepower than the 2020.”