Make no mistake, the Kona N is an “N car”, through and through

The N performance brand continues to expand over at Hyundai with the release of the 2022 Hyundai Kona N compact crossover, which Hyundai is calling a “true hot SUV”. It’s also the first time the N brand has graced the flanks of something other than a fast hatchback, which it has done for a handful of models including the surprising Veloster N hatchback, which is the only “N” vehicle we’ve seen in North America to date. But far as Hyundai is concerned, a CUV it may be, but it still ticks all the right “N” boxes.

“The philosophy of N is basically being fun to drive,” said Thomas Schemera, global chief marketing officer at Hyundai.

“Hyundai N also addresses a much younger and more affluent target group,” said Till Wartenberg, vice-president and head of N brand management and Motorsport. “You will never just drive because getting from A to B will never be boring and that inspires and invites new drivers to join the N community.” Which means that it was no longer enough for the N brand to appeal to the backwards hat-wearing hot hatchback types. If the N brand was going to grow, was going to become a staple of the Hyundai brand, then it was going to have to branch out to vehicles with a wider appeal – and it doesn’t get much wider these days than compact crossovers.

Make no mistake, the Kona N is an “N car”, through and through, and has gotten what Albert Biermann, president and head of R&D division, calls the “full N treatment”.

“If you look at an N vehicle, it looks quite similar (to its non-N counterpart), but there are many changes,” he said. “We stiffen up the body-in-white in certain areas…there is more steering response, more steering linearity, the brakes of course are much bigger for track driving, the whole cooling system is a lot more powerful and you can enjoy track driving for several laps without degradation (and) the N is of course, more powerful.”

“Track driving”. “Bigger brakes”. “More Power”. That’s all well and good, but this is still a compact CUV, right? Surely, the track is farthest from most owners’ minds in this segment. Maybe so, but the power figures suggest otherwise. Hyundai has cranked up the Kona N’s power to 276 horsepower and 289 pound-feet of torque courtesy of a turbocharged inline-4 (same as the Veloster N), fed to the front wheels through an eight-speed wet-type dual clutch transmission. In addition to that, drivers have access to an extra 10 hp for 20 seconds with the push of a wheel-mounted button marked “NGR” for “N Grin Shift” – don’t ask. There’s also launch control and a variable exhaust system, enough to propel the Kona N to 100 km/h from stop in 5.5 seconds.

That sounds pretty race car-like to me and indeed, Hyundai has taken the N division racing both on the road and off it; they have competed in the TCR touring car series as well as the World Rally Championship. Throw lessons learned from those two disciplines together and all of a sudden, a performance crossover that can actually be tracked doesn’t seem quite as far off. 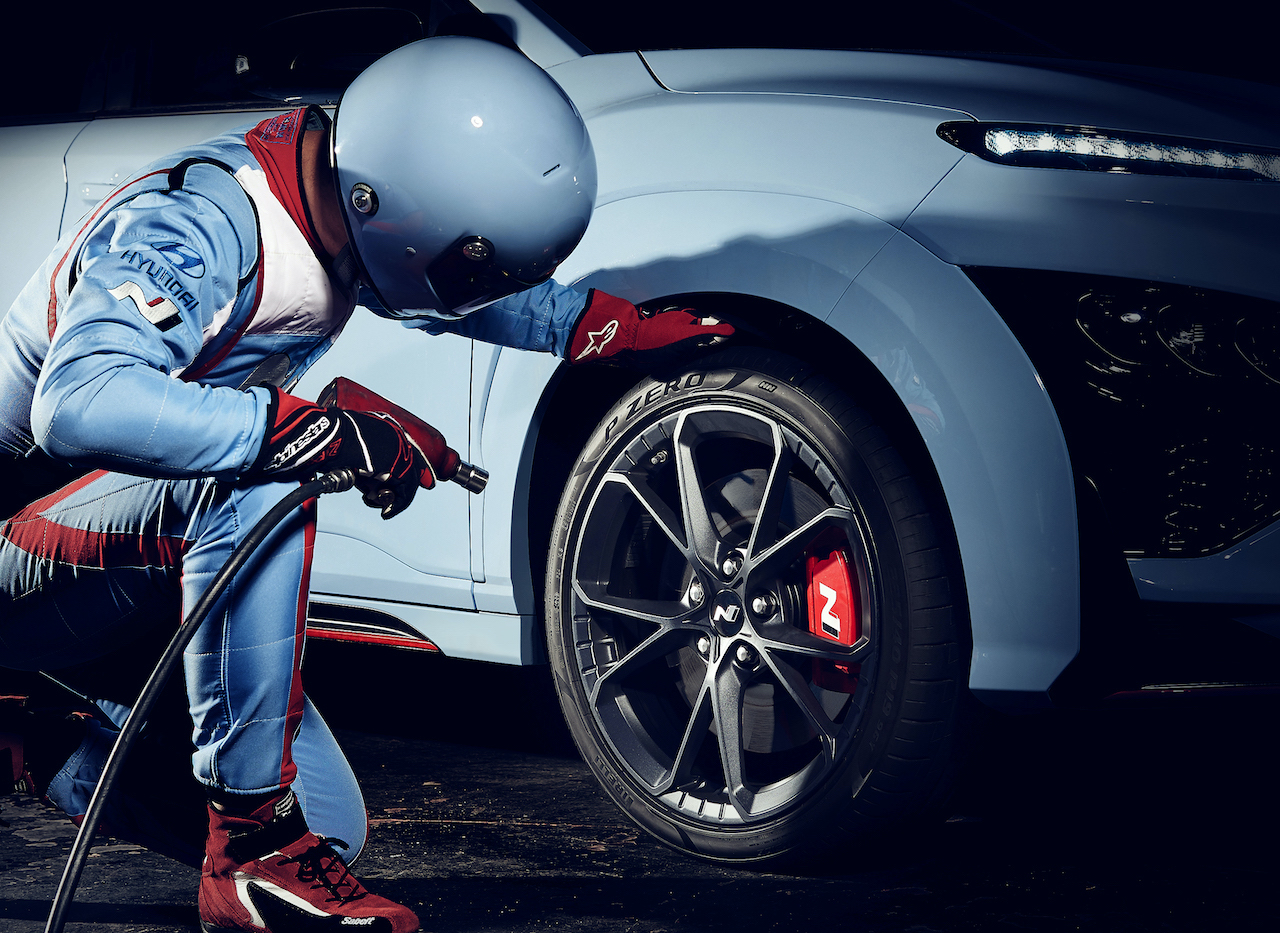 Plus, there’s very little question that it looks the part. The 19-inch wheels plus side skirts and front lip spoiler provide a much lower stance, and the track is wider as well. There’s also a great roof-mounted spoiler, but the detail you really want to look for is the triangular foglight that’s integrated into it, as that’s a direct lift from various racing car series. It also gets a Sonic Blue colour option that’s only available on the Kona N. Speaking of that colour – you’ll see more of any colour you choose for your Kona N than you will on other Konas because the former eschews the plastic cladding ‘round the wheels and rocker panels that the latter gets. Just another way of showing what “the power of N” can do to a Hyundai vehicle.

It comes as little surprise that the interior has been given a once-over as well; those familiar with the Veloster N will notice the blue-hued wheel-mounted buttons that serves as shortcuts to “N” mode, which can be configured to suit specific driver profiles – just like you’ll find in a BMW M car. Pretty high-level stuff.

Other interior adds include special seats, a 10.25-inch digital gauge cluster whose two-dial default mode gets swapped to a touring car-esque singe digital display when N mode is active, 10.25-inch infotainment display and heads-up display (HUD) – although the way the panel on which the HUD is reflected rises up from the gauge hood may not be to everyone’s liking; the more popular format is to have it reflected off the windshield ahead. 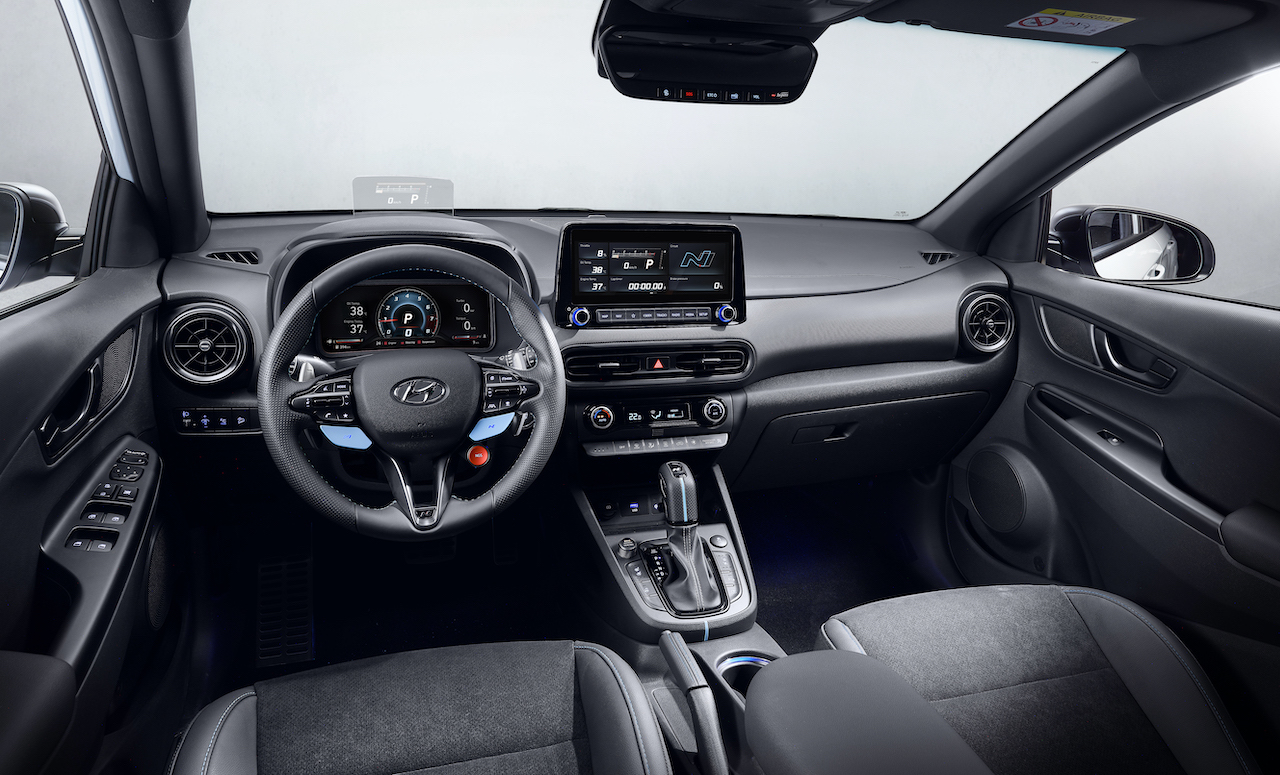 What of that FWD-only powertrain, though? Seems a little strange that they’d release a performance CUV without AWD, doesn’t it?

“We believe that a front-wheel-drive, well balanced and orchestrated powerful car is what we need right now,” said Wartenberg. “And it’s also a reason to stay affordable and accessible in this car segment.” Which, according to Hyundai, is kind of a brand-new segment in the U.S. in which there aren’t all that many – if any – players right now. Plus, with the standard electronic limited slip differential – and the final testing being done on the Nurburgring Nordschleife, where Hyundai has a dedicated facility – there should be plenty of performance even without AWD.

Having said that, a big part of both Hyundai and N’s future has to do with sustainability and electrification – they’re already prepping their entrant into the all-EV version of the TCR series – and all signs point to the brand working feverishly to develop EV versions of N performance vehicles. Remember that the Kona electric already exists, and switching to an electric powertrain often turns FWD-only vehicles into AWD vehicles so why not the Kona N? Seems like the next logical step.

For now, though, the Kona N will be arriving in showrooms later this summer as ICE-only, but that’s only just the start as the manufacturer promises to continue growing the N brand through both its “N” and “N-Line” products over the coming year.