GM added Android-based Alexa capability to many of its 2018 and newer vehicles this summer; we find out what it can do, in theory and practice

Count me in as a major fan of web-based vehicle lock and unlock capabilities: it saved us one time when my significant other somehow locked our one key fob inside the car. What could have been a stressful and expensive situation was easily resolved when I logged into the vehicle connected app, remotely unlocked the door, and she retrieved the key fob from deep inside her purse.

So when GM announced earlier this summer that Alexa Auto was now officially available right in your dash on most 2018 and newer GM vehicles in Canada with compatible infotainment units, and would therefore offer this capability (among many others) simply by asking for it on a smart home device, it seemed intriguing. What else could it do? In a 30-minute web meeting with both GM Canada and Amazon Alexa Canada officials, they laid out the parameters of what Alexa Auto could do now, how it can integrate with smart home devices now, and what it may possibly do later.

Then a week later with an Alexa Auto-equipped Buick Encore GX as well as a spanking new Amazon Alexa Echo Dot smart home device, I test drove Alexa Auto in the car and how it worked with Alexa at home.

In short, it can do a lot, especially if you’re willing to the invest time to make your vehicle, the Alexa home device, the Alexa app (including credit card info), other smart home devices (e.g., connected lights) and phone all speak to each other. But it never all worked together as seamlessly as advertised.

To be fair, this was in part because I didn’t have the OnStar credentials to connect the home device or my phone app to the vehicle, which would allow me to lock/unlock it or start it from anywhere remotely simply by saying ‘Alexa, unlock my car.’ The embedded Alexa function in the Buick did manage to work to a level close to or perhaps slightly beyond the one offered by the native GM voice recognition system eventually, but there were still a few instances where it still didn’t manage to do what GM and Amazon Canada folks said it could do.

Perhaps that was because of some missing owner credentials, or possibly app/phone connections. But also, I suspect it would all work better with an Android phone that shares the same underlying programming language, instead of my iPhone 8+.

It also likely would be especially useful to someone who already has an Alexa smart home device, and perhaps with a few more smart devices.

Back in the car, Alexa Auto essentially now gives modern GM vehicle drivers a choice for the voice recognition button on their steering wheel: keep the default native voice recognition system, or opt for Alexa Auto. You can switch back and forth between the two, which can be useful if you switch drivers or to another phone without the Alexa app. 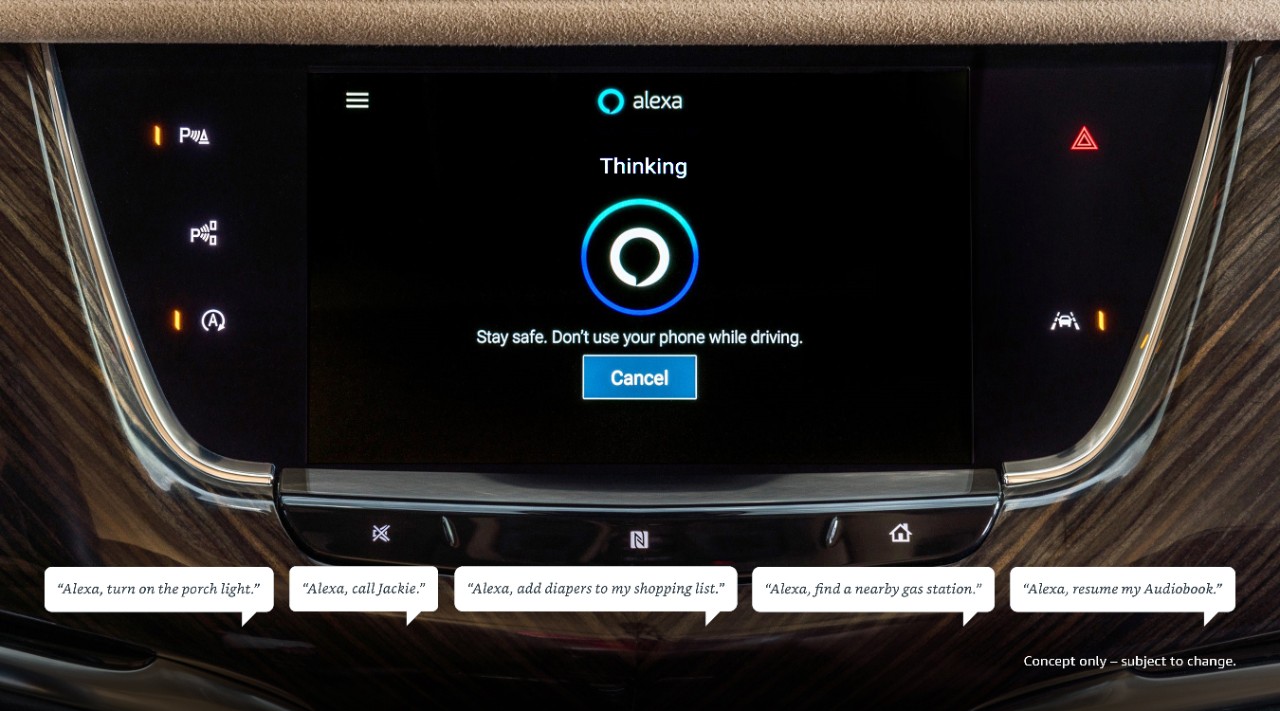 With Alexa enabled, it essentially works like the embedded voice recognition system, but with more options. So you can hit the voice button and say ‘Find the nearest coffee shop…’, and instead of the coffee shops embedded into the navi maps that don’t change over the life of the car, Alexa is now smart enough to give you an updated lists with every new Starbucks nearby.

It’s really this constant learning and updating of POIs as well as the progressively smarter voice recognition abilities that will likely make Alexa increasingly useful as the years pass.

So what else can Alexa Auto do?

The usual voice commands worked well once properly set up, such as ‘Call X on mobile’ or ‘Take me to (address).’ David Beigleter, product manager for Connected Services for GM Canada, also demonstrated on our Zoom call how he had set up Alexa to be able to follow his command to “turn on the front porch light,” which is great when arriving home late.

“We want to help connect our customers to their digital life outside and inside their car,” he said. “We’re pioneers here, starting with our OnStar services to connect both many years ago.”

So the company has started adding apps straight into its vehicles, starting with Spotify last year, and Alexa Auto in late June, on top of the Apple CarPlay and Android Auto apps also meant to streamline one’s digital life.

The software is now embedded on most 2021 Chevrolet, Buick, GMC and Cadillac vehicles, as well as many 2018 to 2020 with the higher end Info 3 connected infotainment system – if you have an app store option in your ’18 or newer GM vehicle, the Alexa app should be there and available to download and use.

Arianne Walker, who is listed as Amazon’s Alexa Auto chief evangelist, said in the Zoom meeting that it can easily add something to your calendar or take notes, allow you to access your audiobook or podcasts, and can resume on your device in the car right from when you stopped in your home.

But the only current home to vehicle services connected are the lock/unlock and remote start functions: both functions which happened to be available right on the Encore GX’s key fob, though of course only from a limited distance, and not anywhere with a ‘net connection. The key fob would not have helped my wife way back when she was locked out.

Beigleter said they are working on other functions, such as communicating to your Alexa device at home how much fuel (gas or electricity) is in the vehicle, or when it’s due for its next service – information that’s often available already on GM apps connected to the vehicle.

But unfortunately, Alexa didn’t follow commands when Apple CarPlay was enabled by attaching my phone to the car. Disconnecting the phone, and therefore CarPlay, Alexa did give me sports updates from TuneIn, so I figured it could give me music from the digital TuneIn music service as well. And even though ‘Play the Beatles’ was one of the sample commands given by Alexa as examples of things I could request, Alexa responded to that exact phrase with “I can’t find songs by the Beatles.”

Plus, when I tried to play songs with Alexa from Apple music from my iPhone, using artists and song titles I knew were on my phone in the Music app, it responded ‘Apple Music is not supported on this device.’ Hmm….

The good news is that Alexa should continually improve, and will likely become smoother and smarter over time. Although keep in mind, it needs continuous connection to the web, so no OnStar online package, or hotspot connection through your phone or home WiFi, means no Alexa connection.

All in all, Alexa Auto seems most useful now for a tech-focused driver running a smart home using Alexa already at home, likely with an Android device and phone, and willing to invest the time needed to set up these different accounts to talk to each other.