Every week, wheels.ca selects a new vehicle and takes a good look at its entry-level trim. If we find it worthy of your consideration, we'll let you know. If not, we'll recommend one - or the required options - that earns a passing grade.

Finding a three-row midsize SUV with a sticker price well south of $40,000 isn’t the easiest of tasks, given automaker’s propensity for packing those types of machines with high-profit options. Still, there are a few from which to select, including the handsome and lantern-jawed GMC Acadia.

Buried in the build sheet for this vehicle is the front-wheel drive SLE, a machine priced at $37,498 yet wearing many of the features which appear much further up the GMC food chain. It’s worth noting that a quick search with the brand’s inventory tool reveal multiple examples of this cheapest of Acadia SUVs on dealer lots, a marked shift from the typical practice of advertising a rock-bottom price but only stocking higher-priced trims. In other words, this build spec actually exists.

Under the hood is a 2.5-litre naturally-aspirated four-cylinder engine, making 193 horsepower and driving only the front wheels. It shares a nine-speed automatic transmission with the rest of the Acadia range. Typical traction and stability controls are included, but active features like automatic emergency braking are not fitted nor available on this front-wheel drive trim.

Save for a roof rack and miniscule fog lamps, there isn’t much to distinguish the SLE from the uplevel SLT. The much more costly AT4 and Denali trims are immediately recognizable, however. Summit White is the sole no-charge paint option, though at least more interesting trims are made available instead of sticking Base Camp customers with greyscale shades. Those are 18-inch machined aluminum wheels at each corner, plus LED headlamps and heated power outside mirrors. 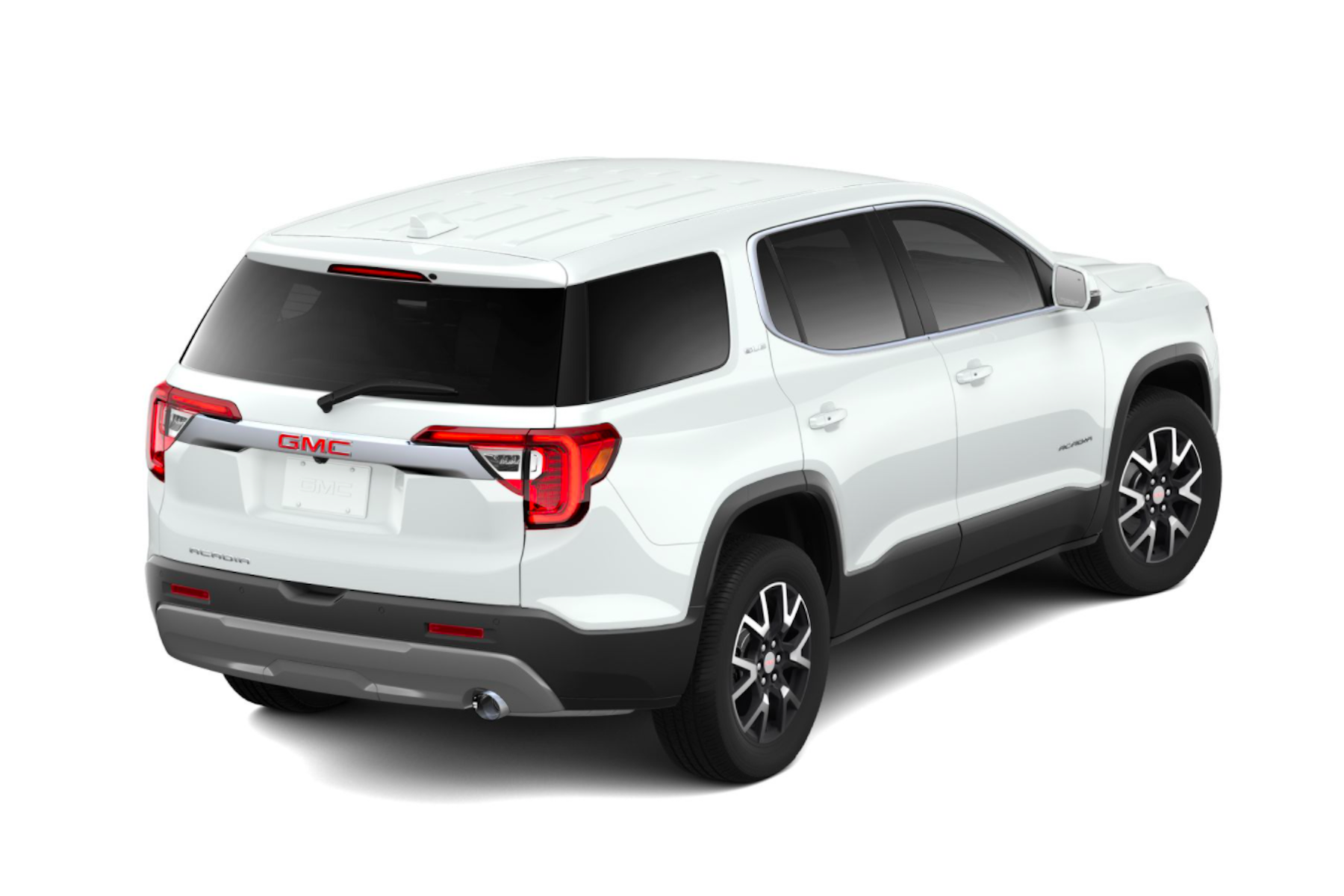 Inside, the least expensive 2021 Acadia utilizes the same infotainment system found in much more expensive trims, providing an 8-inch touchscreen display with wireless Apple CarPlay and Bluetooth capabilities. Satellite radio is also part of the deal, something that’s absent from entry-level trims at some brands (*ahem Honda ahem*). Thanks to economies of scale, GMC installs an expensive 8-way power driver seat in this base model, along with heated front chairs, tri-zone climate control, and a wheelbarrow load of USB ports. 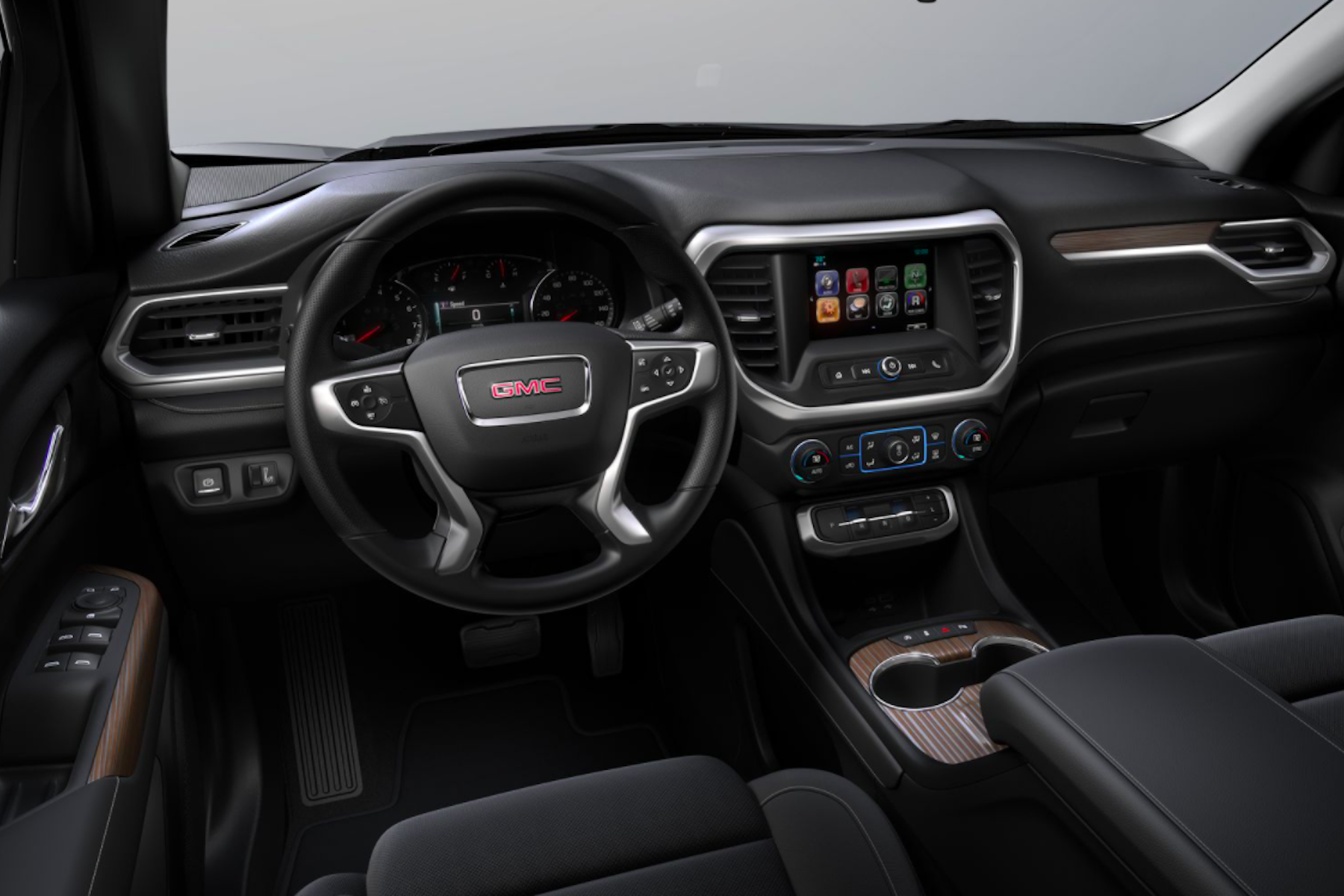 Your author will stick his neck out an make the argument that wide swaths of the country don’t actually need all-wheel drive; our family spent multiple Nova Scotia winters in a front-wheel drive SUV shod with high-quality winter tires and got along just fine. However, there are parts of the nation which suffers from a much higher snowfall than this part of the land.

Making the $2300 walk to a front-wheel drive SLE with a 3.5-litre V6 engine nets buyers a stout 310 horsepower, though combined fuel economy ratings drop by 0.5L/100km, meaning running costs will also be higher. The extra power may be worth the cost for some buyers, so it would behoove the smart shopper to test drive both variants. Rumours suggest GMC is dropping the 2.5-litre from Acadia for 2022, so whatever ones currently remain on dealer lots are likely the last of their breed.