Carte Blanche - Seeing in the Dark

Of the literally thousands of press events I’ve covered over my career, a handful still stand out. One such was about 20 years ago, when General Motors showed off the Night Vision system that was available in their Cadillac Sedan de Ville.

The system, based on thermal imaging, used infrared cameras to detect differences in heat signatures beyond the range of human vision. The scene was Shannonville Motorsports Park, east of Belleville. A Caddy was parked facing south with its headlights on. We could see nothing beyond the range of those headlights.

Then they switched on the Night Vision system. An image of a man walking in front of the car – a set-up by GM – came into view on the screen. Yikes! This car could literally see in the dark.

Also on the screen we could see other images moving in the farther distance. What, could this system also pick up ghosts? It took a while for even the GM people to realize that these images were cows, grazing in a pasture across Highway 2. Must have been over a kilometre away. 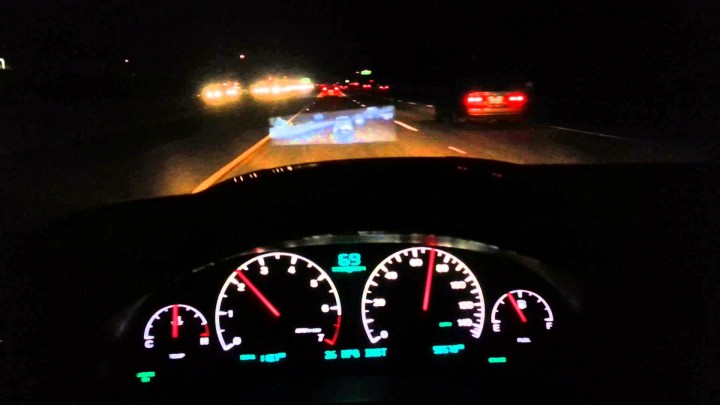 Different technologies can accomplish similar results. At least on TV shows – a well-known source of accurate research – night vision cameras can spot lost children in the woods at night from airplanes hundreds of metres in the air.

With considerably more credibility, R.C.M.P. drug-sniffers can fly over a residential area and spot grow-ops simply from the heat signature generated by the heat used to help grow the plants. I used to wonder if my Mom’s house was ever spotted – she grew ferns from spores in her basement that was wall-to-wall with fluorescent light fixtures I had installed for her.

Several other vehicles – Audi, Acura and Infiniti come to mind – have offered similar systems over the years. Cadillac actually discontinued Night Vision after four years, but later brought it back. It was on a couple of recent Caddies I’ve tested, although frankly, I forgot to check out how well these newer systems worked.

This all came back to mind when I was sent a device to test (despite the name of this section, we don’t only test items with four round things with black rubber around them).

It’s the “Lanmodo Vast – 1080P Automotive Night Vision” system. It can be installed in any car, truck, ATV, anything that moves and has a 12-volt plug available.

The unit appears to be well made, and is dead simple to install. A non-slip pad will stick to just about any dash surface, and the unit slides right into that. You plug it in to your vehicle’s 12-volt outlet, switch it on, and you’re set to go. An alternative power source is the OBD (On Board Diagnostics) plug, for which a fitting is also supplied.

Heck, they even include a small Phillips screwdriver to attach the various bits.

You can also hang the device upside down from your rear-view mirror or from a multi-adjustable fitting with a suction cup, if that fits your vehicle better. Fortunately, there is a switch that flips the image so you don’t have to stand on your head to view it. Why there is also the option of mirror-imaging the display is less clear…

“Vast” uses low-light imaging technology, which differs from the units the cops or other car night vision system use, which are typically laser- or infrared-based. The advantages appear to include brighter images, and lower cost. I fitted it first to my own Volkswagen Jetta TDI Wagon, and also to a Mitsubishi Outlander I had on test. It looked – well, OEM (“original equipment”).

I didn’t bother installing it permanently – this system will probably last longer than my poor VeeDub will, and I wasn’t about to start hacking away at the trim bits of a test car. But it wouldn’t take anyone well-versed in automotive interiors – a radio installer, for example – to do a factory-like install.

Or, you could leave it as a temporary add-on – one of the advantages of an after-market system like this over a factory set-up is it can fit any car. Factory systems are only available on certain vehicles that may not be on your list.

Also, you can move this one from car to car, and keep it for your next car when your trade in.

On the road, the Vast gives a clear, full-colour view of what’s ahead of you (or behind you, if you hook up the rear vision feature, which

I’m on record about a million times that I dislike head-up displays which clutter the field of vision in your windshield. Vast differs because you can mount the screen well off to your right; I found it minimally distracting.

Taking photos of this system is tricky – I did the best I could with my cell phone. Playing around with the contrast and brightness controls can help improve the image quality.

But I can tell you that the system gives you a clear view of what’s coming up ahead, in daylight, at dusk, even in near-complete darkness.

Some of the videos on the company’s web site  do a better job than I could anyway of showing what the images look like. These are clearly from customers, not from pro video shooters, so my apologies in advance for some of the editing and the language…

Also, not even my kids know what “minty” means – one of the words used on these videos – but apparently it is an adjective that means “good”. It wouldn’t be a Kenzie review without suggestions for improvement.

The device is made in China, and as is often the case in that scenario, the instruction manual is less than clearly written. Nor is it comprehensive. The buttons that govern its operation are tiny, not well marked, and I found them confusing. Familiarity helps. And because the buttons are on the device which may be more than an  arm’s length away, a remote control might be a useful addition.

On that Lanmodo web site, the current price is showing as $499 U.S., marked down from $599. You apparently can order direct from that website, or from Amazon. There’s also a banner on the website that says there is a “Super Early Bird Price of $199″. When you click on that link, it takes you to the”indiegogo.com” website, that to my eye, untrained in the vagaries of web purchasing, suggests the device is available for a mere $119,630 CDN. Geez, are they selling the entire company?

Turns out indiegogo.com is some kind of crowd funding site that appears to have nothing at all to do with selling car safety devices. I have no clue about any of that.

But if you would like to be a safer driver at night, you should look into the Lanmodo Night Vision camera.

The life you save, could be mine,

The dashcam was provided to the writer by the manufacturer. Content and vehicle evaluations were not subject to approval.