American Scott Bloomquist is a champion late-model stock car racing champion. He makes a lot of money driving on dirt ovals of a half-mile or less. You might have seen photographs of him, four-wheel-drifting his way around speedways, his car literally out of control at least half the time.

Caley Weese of Carrying Place, Ont., is also a champion dirt-track stock car racer. She doesn’t make as much money – far from it, in fact – but she has similar skills. Her claim to fame is being, as far as we know, the first and only woman to win a late-model dirt feature in the Northeast: a geographical area that includes tracks in Ontario, Quebec and U.S. states east of, and including, New York.

That milestone came this year on Labour Day weekend at Brighton Speedway in eastern Ontario. It took her awhile to get that particular checkered flag – she’s been racing for 18 years – and she’s hoping it won’t be her last. What’s interesting, though, beside her being a woman in a predominantly male sport, is that she doesn’t come from a racing family. Her dad (he owned an insurance company and was a farmer at heart) took her to the races one night for something to do and by the time the dust on the track had settled that evening, she was saying to herself “That’s for me.”

Her parents were not exactly thrilled when their 13-year-old daughter told them she wanted to be a race-car driver. “My parents have been supportive of me in anything I’ve wanted to do in my life,” she said. “When I told them I wanted to go racing, they were less supportive. But they never tried to stop me. I was in high school then and I started taking auto classes. The guys, of course, were more mechanically inclined than I was but I was certainly willing to learn and we just sort of fumbled our way through it to get started.”

Weese, who graduated from St. Lawrence College in Kingston (advertising, marketing and communications) started out drag-racing snowmobiles and then tried some endurance racing. In 2003, she started racing four-cylinder cars – hers was a Honda Civic – at what has become her home track, Brighton Speedway, as well as at tracks in Brockville and Cornwall. She won her first championship in that class in 2004.

“In 2005, we bought a Pro Stock car (an ’87 Monte Carlo) and we went racing in that division, winning a championship in a travelling series that went across Ontario and Quebec. We went to five different tracks and it was a busy time. We raced at Brighton every Saturday and then, in the travelling series, it would be Fridays and Sundays at various speedways.” 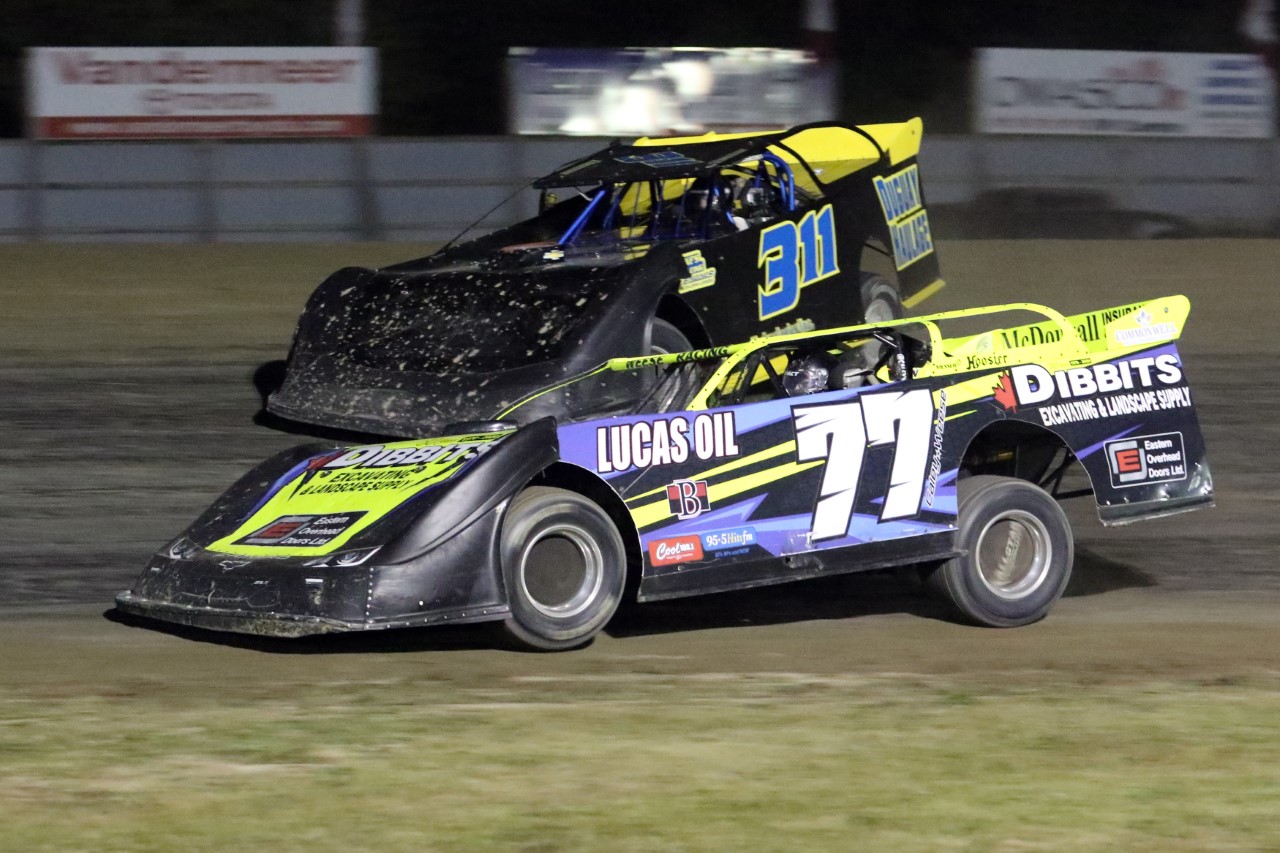 In 2009, Brighton was looking at going to either sportsman or late models as their headline class and Weese was pushing for sportsman, “because you can race those cars almost anywhere in the Northeast. But they went to late models, so that’s where we are today. We went to Kentucky to buy our first late model, a Rocket, and we’ve been doing that since 2010.”

Throughout our conversation, Weese talked to me about “we,” and “us,” and so I asked her about her team and what each of them did.

“My father and my husband look after the tire prep, and I do all of the preventive maintenance, my bolt checks and so-on,” she said. “I make sure everything is mechanically sound and I change anything that has to be changed. I stay out of the body work; that’s my dad’s job. We race in a crate class (you’re not supposed to open up the motor) but when it comes to the carburetor and any fine-tuning, I let my husband do that. I quite like our car; we’ve had it for a few years now but it’s holding up.”

Weese said the night she won her famous feature, everything fell into line.

“It happened Sept. 4 at Brighton and it was a flawless race. All the stars aligned perfectly. Our class is so close on speed; we’re fighting for tenths of a second. The competition is pretty brisk. If you can finish in the top 10 in points at Brighton, you can finish in the top 10 pretty much anywhere in the Northeast. I finished second in my heat and then pulled pole on the redraw and led all 30 laps. We thought it was all kind of cool.”

Now, there aren’t many women racing anything, anywhere, so I asked why.

“It’s a sport that if you’re not mechanically inclined, it’s not something you can just jump into. It’s a lifestyle and it’s a commitment. We haven’t been travelling as much the last couple of years – COVID-19 stopped us going to the States, for instance – but previous to that I was used to missing parties, weddings, funerals, everything, ever since I was in high school. You have a commitment and you’re in a points race every year so if you skip a night you’re going to screw things up for yourself. You work so hard that you can’t just not show up.”

I asked her about their decision to stay home more. Besides the pandemic, there had to be other reasons.

“At this point. I’m happy to participate in the sport and the hobby that I love,” she said. “I love the fans, I love the community, I love everything about it.  You know, the racing is just a small part of what goes on at the speedway. We like it for the community aspect, as well as for the racing. We had an anti-bullying awareness tT-shirt campaign that we ran for a few years. I would say that we’re pretty happy doing what we’re doing and I don’t see that changing.”

I started this column by mentioning Scott Bloomquist and I asked Weese about Danica Patrick. Did she need anyone to motivate her? Like the competitor she is, her answer wasn’t surprising: “I’ve never had a favourite driver, period, she said. “I never had anyone to look up to for inspiration or motivation. I’ve had enough in me on my own to make me want to do this.”

You can say that again.