As a kid watching a brand-new 1955 Chevy drive by his house just days after it hit the market, Frank Moore vowed one day he would own a car like that.

During my working life I always drove Pontiacs of various models. However, I have a vivid childhood memory of seeing one of the first 1955 Chevys in our town drive by our home a few days after its introduction to the market. I recall saying to myself that one day I would own one of these cars.

While reading an Auto Trader magazine in 1993 I noticed a ’55 for sale and the picture of it looked great. The vehicle was located north of Kingston, Ont., and we travelled there as a family; me, my wife Bobbi and our son, Scott, to take a look at it.

When I first saw the car it looked awesome, however, after closer inspection I realized what a “10-footer” really meant. After some family discussion, we took the car for a drive. Well, it had been a long time since I’ve driven an old car and I was amazed at how loose the steering felt. With some deliberation and negotiation I agreed to buy the car.

Once I had the Chevy home and examined it more closely, I realized it was not quite mechanically fit, even though it was supposedly roadworthy and certified.

Therein began my long lesson in old car ownership and the costs involved in bringing the car to the point of meeting my expectations. A bank loan started the process. I was very fortunate to connect with a fellow by the name of John Dryden who undertook to restore the vehicle. 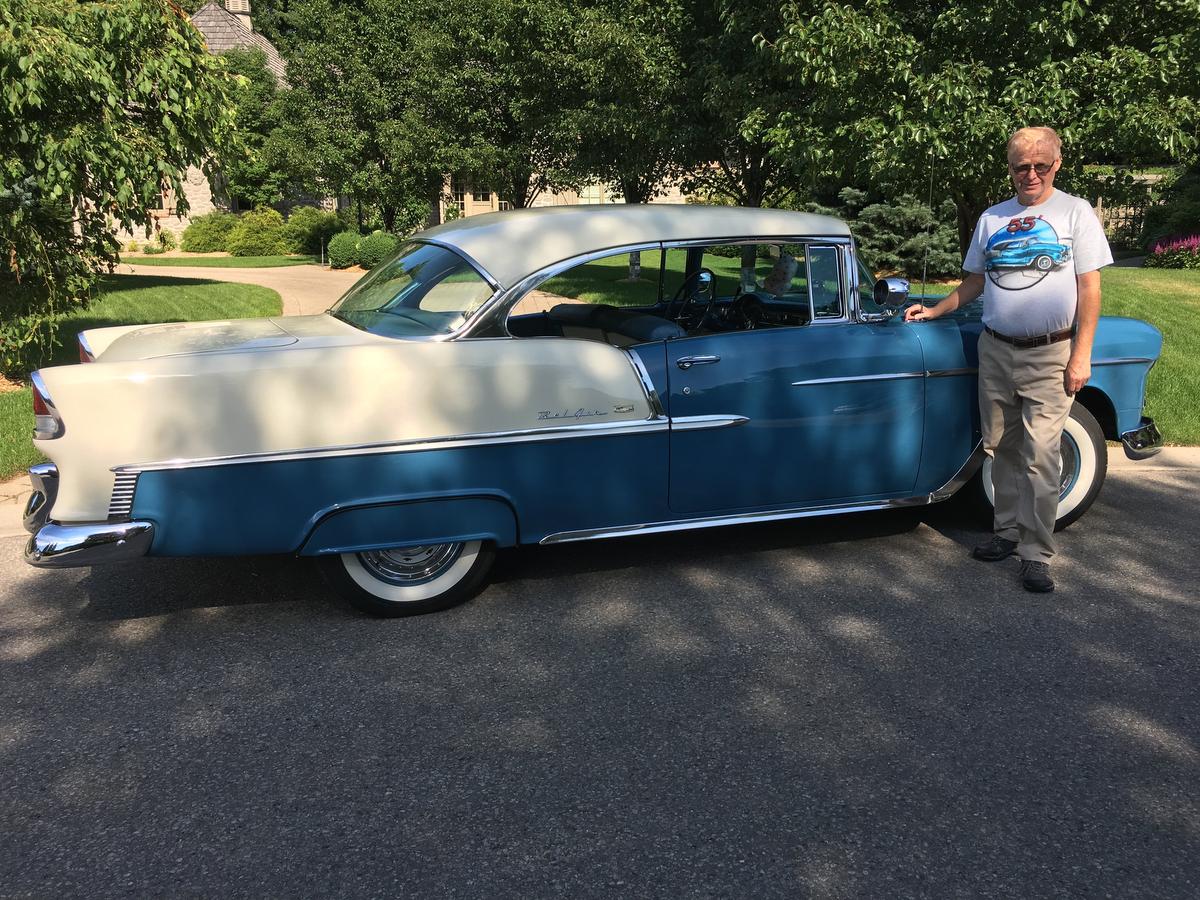 How sweet it is. “Excursions into the countryside are as therapeutic as it gets,” says Frank Moore, describing what it’s like to cruise in his restored ’55 Chevy.

However, when he showed the car to his dad, who was a retired body shop man and had worked on many of these cars, the father told his son to stand aside as he was going to do the work using the lost art of lead vs. bondo.

Doing a little research on the vehicle, I found that it was imported into Canada in July 1978, and had 13 different owners before I bought it. Many of the owners were car wholesalers, who each re-sold the car to make a small profit.

I met one of these owners at a car show in London, Ont., and he told me that he used the Chevy as a weekend camping vehicle. The kids were put in the backseat and the camping gear in the trunk. I couldn’t trace all the car’s history in the U.S. but I did find that it was sold new, through Terrell Motors in Cheyenne, Wyoming. The dealer emblem is still on the car. The car was built in Flint, Mich. on Friday, May 2, 1955.

Originality was important to me, so it still has the same 136-hp Blue Flame factory six-cylinder engine and GM Powerglide transmission. Interestingly, oil filters in those days were dealer-installed options and this car did not have that option installed. You drove about 500 miles and then you did an oil change. Different times. So to this day, I change the oil regularly. Although it was restored almost 23 years ago, today the car looks almost as it did the day I picked it up following the restoration. It was repainted in its original two-tone colours, Shoreline Beige and Glacier Blue.

While I’ve taken the car to many auto shows, and it has won numerous awards, the thrill of ownership is taking the Chevy for a nice ride on the highway, where it receives many thumbs-ups. Excursions into the countryside are as therapeutic as it gets. 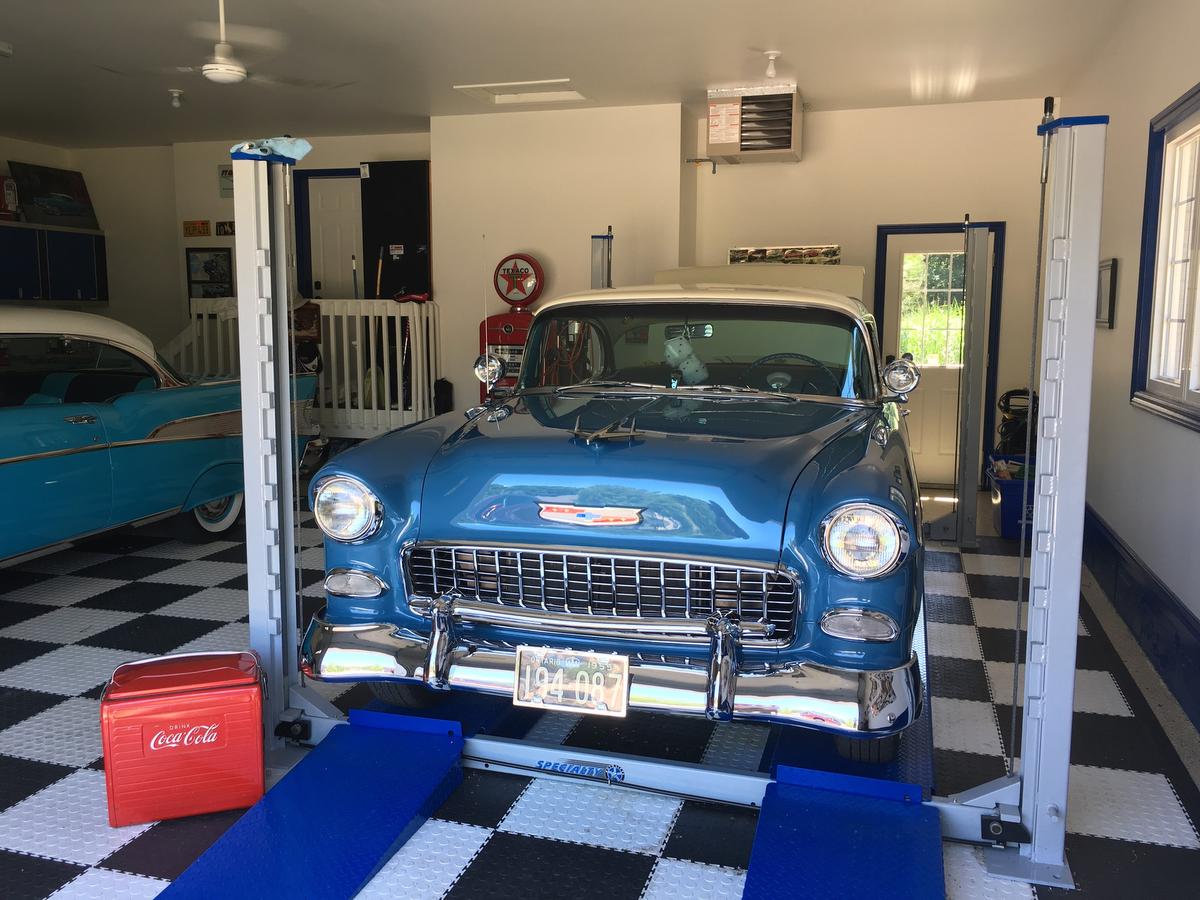 If you’re going to do your own oil changes and maintenance it’s great to have a comfortable place to do it in, like Frank Moore’s garage, where his ’55 Chevy shares space with it’s younger bunkmate, a ’57 Chevy. 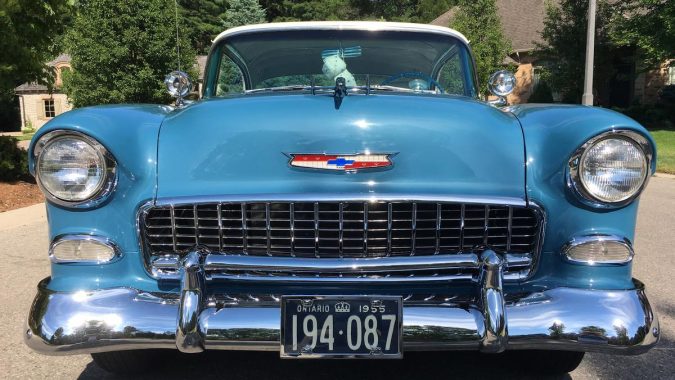 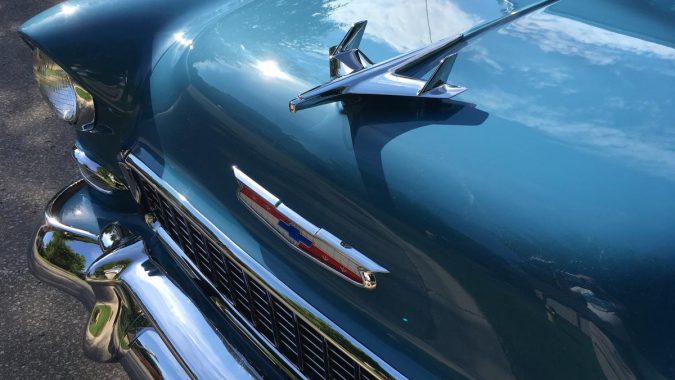 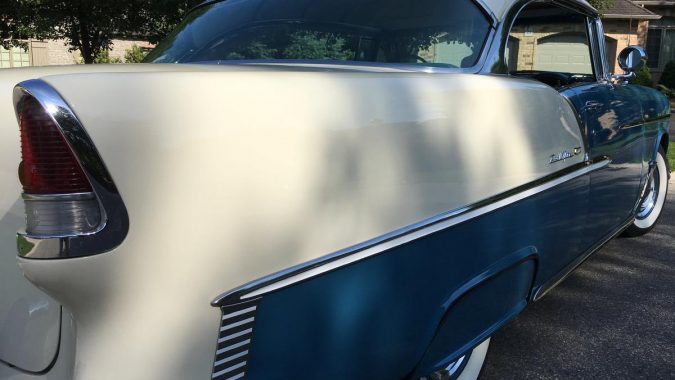 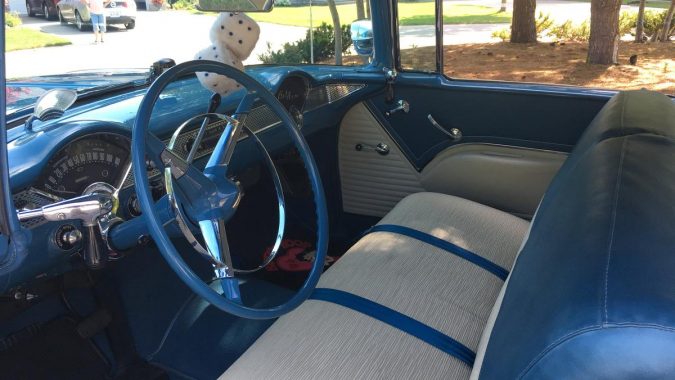 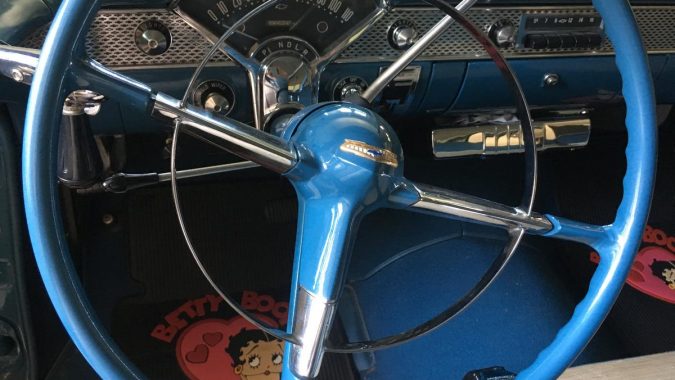 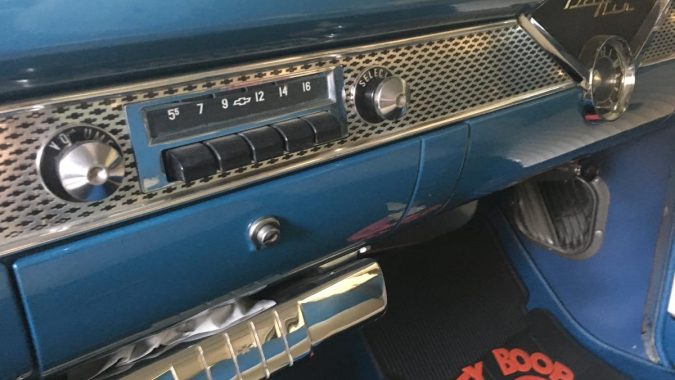 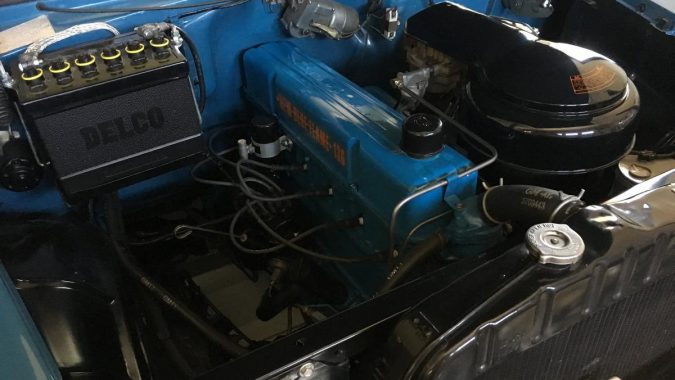 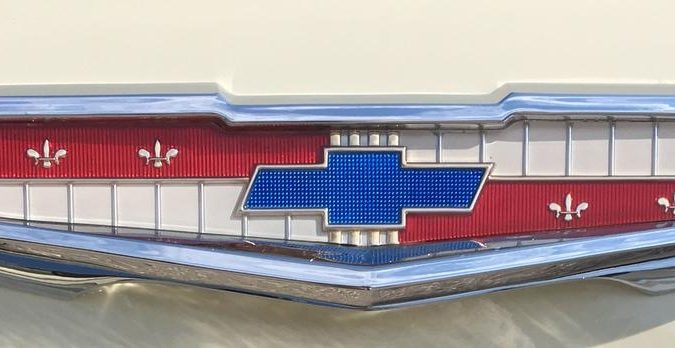 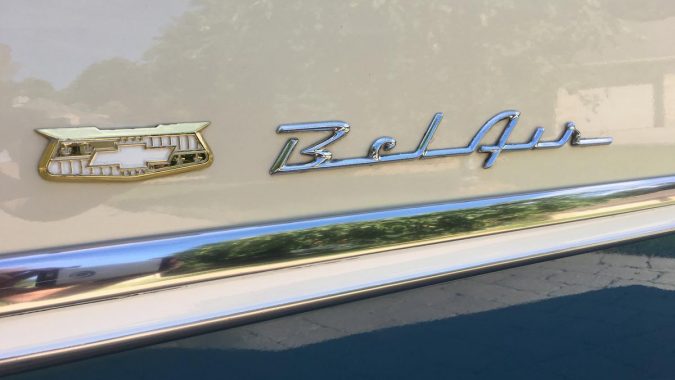