It will take effect on May 1st, so hang onto that buying decision for a couple of weeks if you’re in the market for a new electric car.

This year’s federal budget included details about a new program that will provide a financial incentive to those who choose to buy or lease electric vehicles but, at the time, details were scarcer than a salad at a steakhouse. An errant statement by a government minister in which it was stated that the Chrysler Pacifica Hybrid would qualify for the program had us persistently pestering the federal media departments for more details since, given the original guidelines, that vehicle did not qualify.

Yesterday, the government came through with specifics about the program, now labelled iZEV. For starters, it will take effect on May 1st, so hang onto that buying decision for a couple of weeks if you’re in the market for a new electric car.

Also of note? The program will not be limited to battery-powered vehicles but will also include plug-in hybrid electrics and hydrogen fuel cell cars. This is a mahoosive change, as it adds a significant number of vehicles to the eligibility list. For purposes of this program, the government is considering all three types to be zero emission vehicles (ZEVs) since they have the potential to produce no tailpipe emissions.

Customers who choose to lease their new ZEV will need to sign on the line for 48 months in order to get the full incentive. Shorter-term leases will have their incentives pro-rated. Dealership demo vehicles are eligible, so long as their odometer reads less than 10,000 kilometres, but used machines are excluded (translation: shop carefully if the car in question has been registered).

Finally, the previously announced $45,000 price cap has been massaged. That figure remains applicable to vehicles with six or fewer seats but any ZEV with seven seats or more may have a sticker price of $55,000. Additionally, only the base price of the vehicle in question need be within the cap. Higher priced versions of the six-seats-or-less group will be eligible up to a maximum of $55,000 while the seven-plus team can wear a sticker price of up to $60,000.

One more thing: there are actually two levels of incentive. Battery-electric, hydrogen fuel cell, and longer-range plug-in hybrid vehicles with a battery capacity of 15kWh or more are eligible for the full $5000 incentive. Shorter-range plug-in hybrid electric vehicles with a battery capacity of less than 15kWh are eligible for only $2500.

Clear as mud? Yeah, we know. Fortunately, we’ve assembled a couple of charts to help you make sense of it all. The vehicles shown here were all the ones listed as program eligible as of April 17th, 2019. Be sure to follow this story for further updates, including the addition of more qualifying cars. For the official sortable list, please click here. 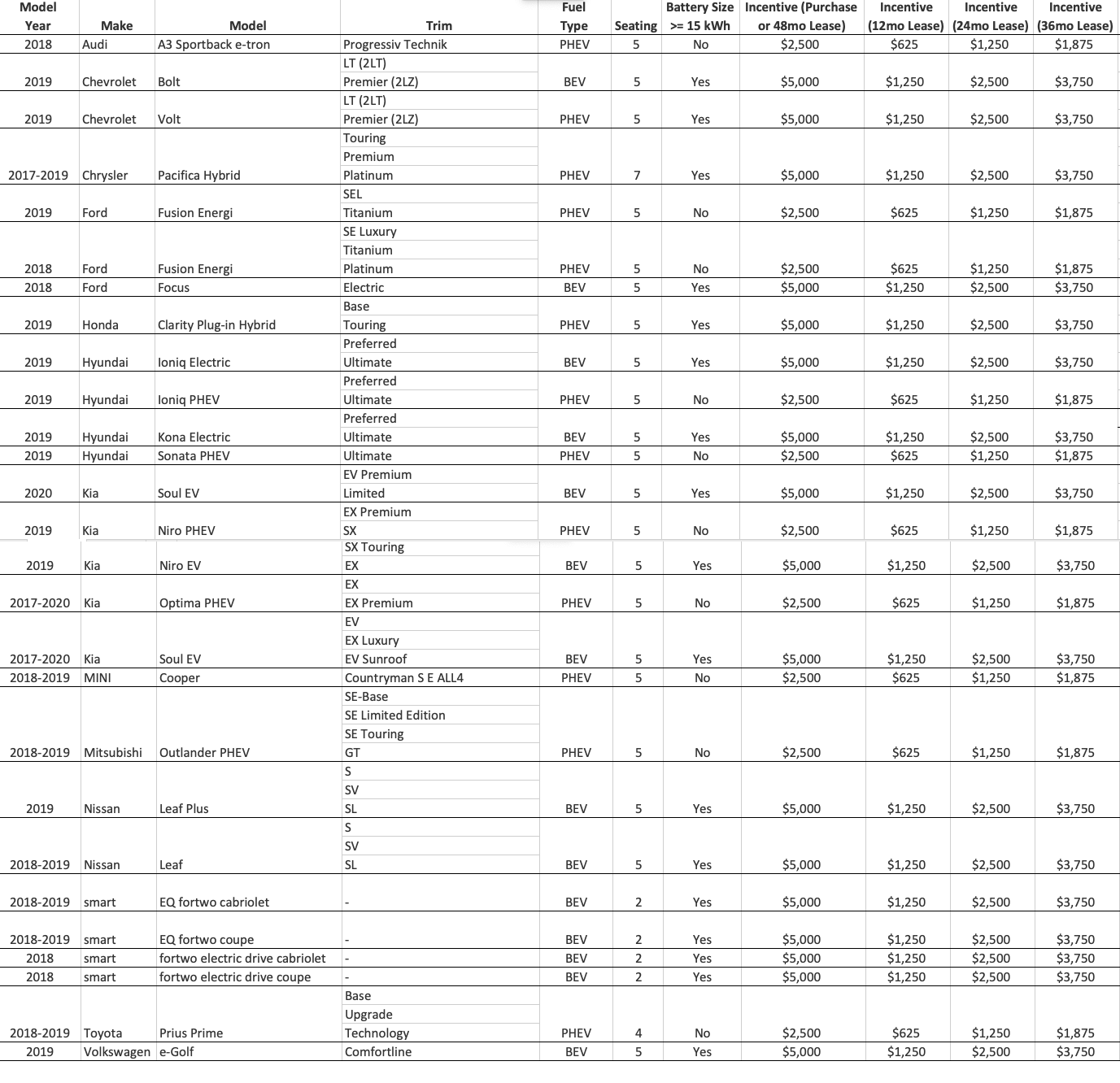