With the Hollywood blockbuster flick Ford vs Ferrari, a tale about the American automaker’s battle to defeat the Italians to the coveted checkered flag at Le Mans, set to open on November 14, everyone with any connection to the story is looking to gain a bit of publicity from the production. Naturally, modern day Ford is first in line to get a popularity boost, despite not having been the driving force behind the movie.

To die-hard motorsport enthusiasts, the story is legendary, but for readers who may not know it, allow me to provide a brief recap.

The year was 1963 and Ford had a model mix problem in that it did not have a challenger to the threat created by the Chevrolet Corvette. More than just a halo car, the Corvette had been winning on race tracks across North America. Always a racing enthusiast himself, Henry Ford knew that the solution was to beat the Corvette on the track and was convinced that the fastest way to winning on the sales floor was to win the biggest sports car race of them all. The 24 Hours of Le Mans.

At the time, Ferrari was the team to beat in the French race and Ford felt that the quickest way to the front of the pack would be to buy Ferrari and collaborate on a new Ford sports car. An agreement was made and everything appeared to be in order, when a telegram arrived in Dearborn just four days later, announcing that the deal was dead.

That denial, on May 22, 1963 set in motion a development battle unlike any that had been seen before. Or since for that matter.

Henry Ford was an avid collector of pretty much everything and that personal passion spilled over into the company that bears his name, which to this day houses a massive archive which includes the tiniest of details. Especially when it comes to the Ford “GT and Sports Car Project”.

Housed deep in the bowels of the blue oval’s sprawling engineering centre in Dearborn, Michigan, the archives were opened up for a select group of media last week to offer a very exclusive glimpse into the years leading up to the 1966 Le Mans effort. Despite the small assembly of media, the attendance of Edsel Ford II left no questions about the importance of the GT program not only to the company, but the Ford family.

As one might expect, the presentation began in the garages, with the car that starred as the winner in the movie taking center stage, flanked by a 2017 GT in matching livery and a 2017 racing car. 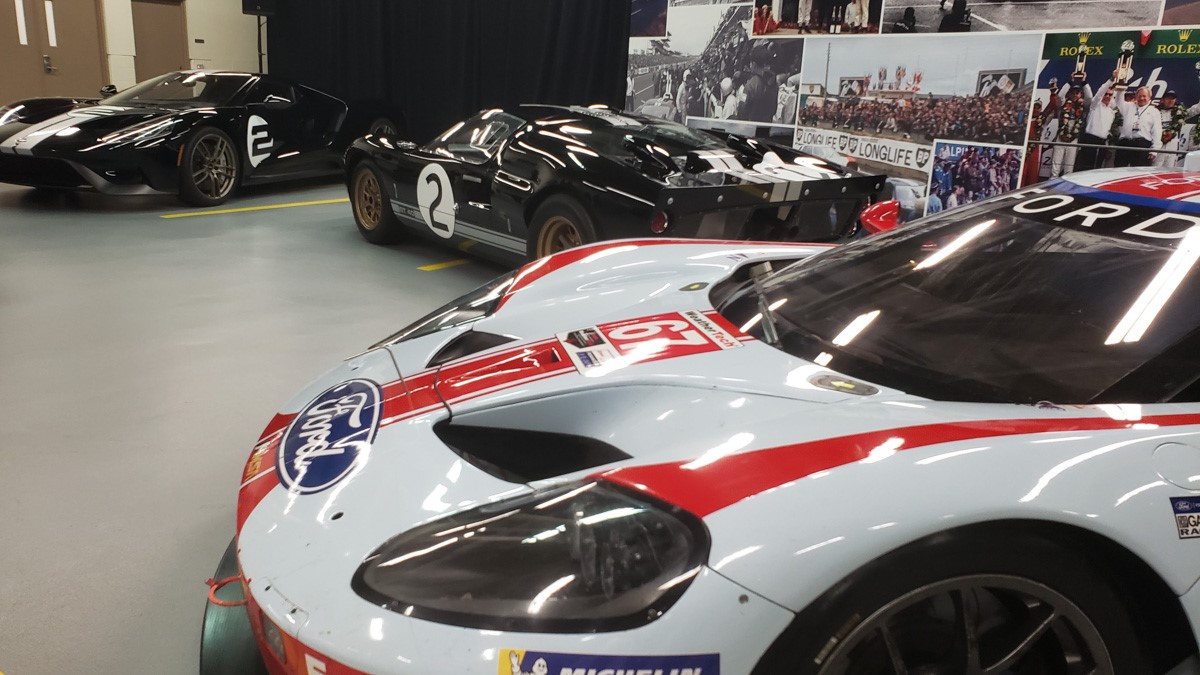 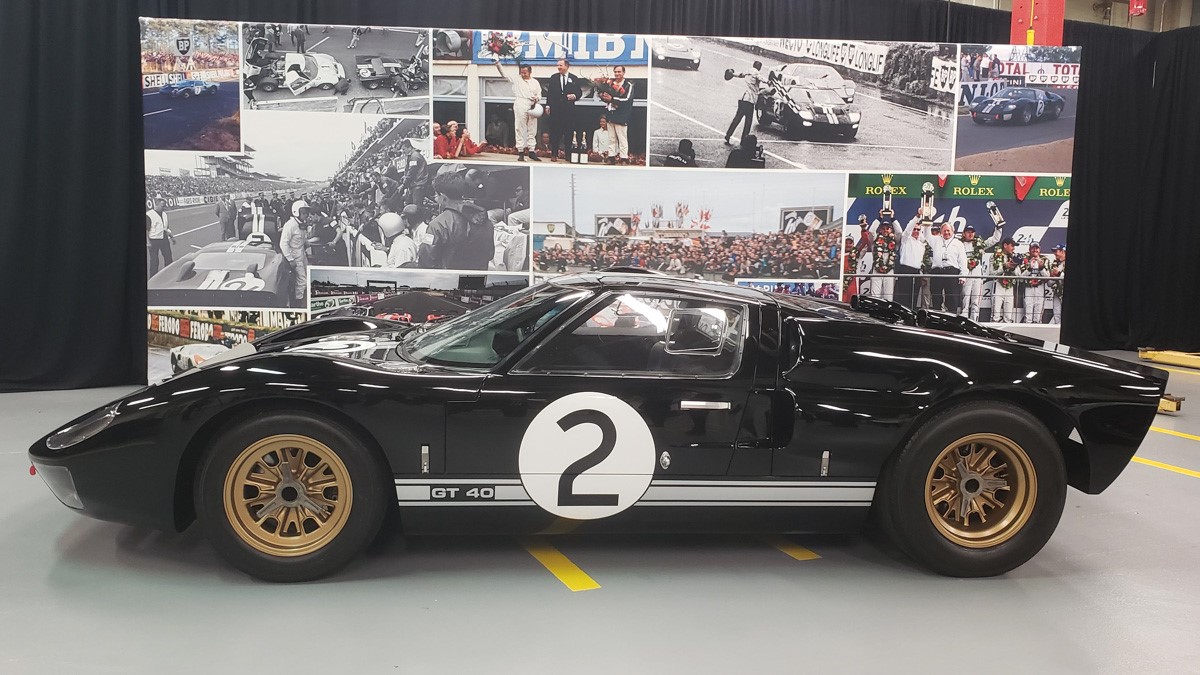 The movie car is not the original race winner, nor even an original GT40. Instead, it is a stunning replica of the original, built by a company called Superformance. Authenticity is of no concern however, as these cars are officially known as continuation cars, built as authorized by Shelby and come complete with Shelby chassis numbers.

The real stars of this show were the memories of an 83 year old engineer. The mind-blowing collection of what could best be called memorabilia was also awesome for a motorsport history geek like me.

Mose Nowland is a master of engine building, who has been at the very middle of some of racing’s greatest campaigns. Nowland worked with Lotus to keep the four-cam V8 engines that the British company used at Indianapolis before leaving that project to work on the NASCAR program. That meant overseeing the big 427 CI V8s used by teams such as Holman-Moody. When Carroll Shelby told Henry Ford that the small block engines were too light duty to succeed in the GT40, it was decided that a detuned 427 should be installed in the sports car. Nowland was the guy that oversaw those engines.

The engineer, who still works three days a week at the Greenfield Village museum and another two at Ford’s Fairlane Mansion, recounted the tale of how a simple everyday item became crucial to the team’s success in France. 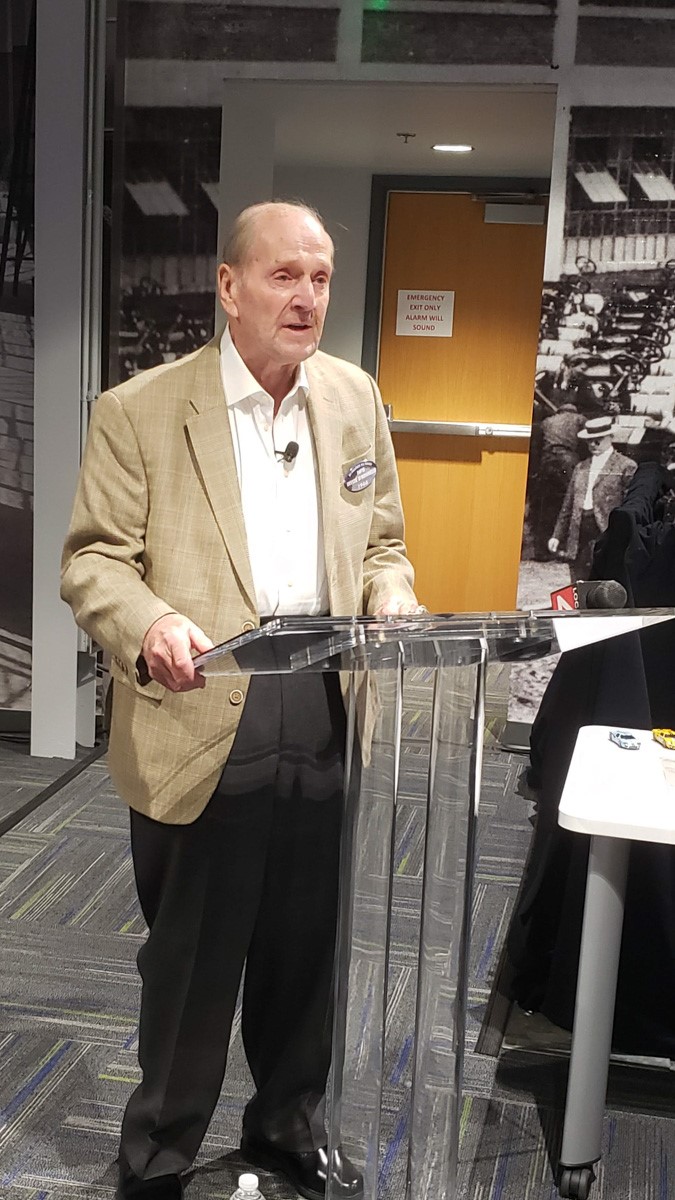 The big V8 engines received different cylinder heads from the NASCAR applications and switched to a dry sump oil system to allow for the lower profile needed to fit in the low slung body. The original head gaskets did not seal sufficiently, so after much trial and error, the team found that the solution was as simple as positioning a ring of “string” around the sealing surface. That string was actually a very specific brand of trout fishing line, which offered just the right thickness and just the right amount of squish when compressed, to create the seal needed.

Prior to being shipped to France ahead of the race, the cars were shipped to Ford’s primary partners in the racing effort, Holman-Moody and Shelby American for testing. As the Holman-Moody crew ran their tester up and down a closed runway in Charlotte, North Carolina, they almost immediately discovered an oil leak in the valley between the cylinder heads. Just four hours later, a call came from California, where Shelby’s crew were also at a closed airport and they had exactly the same condition. Without this shakedown run, the GT40’s race would have ended before the first lap was complete.

Nowland suspected that he knew the cause, so hopped on a flight from Dearborn to Charlotte. Knowing that North Carolina was a haven for outdoor sportsman, the engineer was convinced that the answer was in one of the many bait and tackle shops. The story goes that store staff thought this northerner was crazy when he walked into the store and bought ALL of the fishing line in sight. Arriving at the testing site, Nowland says he removed the cylinder heads and his suspicion was correct: there was no string between the heads and the gaskets. He made the repair, verified that there were no continuing leaks and then flew to California to make the same repair to Shelby’s car. The engine shop had run out of string and didn’t think it was all that important, so didn’t report it.

Upon returning home, Nowland’s Wife had a bag packed for him and reminded him that he was due to fly to France in just a few hours. Nowland pointed out that the team was so dedicated to making Mr. Ford’s expectations come true that they often went days without sleep.

As team members prepared for the race, Ford gave each of them a postcard which said “You better win”, signed by the boss himself. The one given to Nowland was on display at the event.

Other items on display were similarly cool:

● The actual agreement letter between Ford and Ferrari from 1963 and the telegram that started a war just four days later.
● Driver agreement and waivers signed by Dan Gurney, Chris Amon, and Bruce McLaren.
● The trophies from Ford’s wins at Le Mans in 1966 and 2016.
● A pair of Le Mans 24 cufflinks from Edsel Ford II’s personal collection.
● Photo negatives of the original Ford GT clay model.
● The original “playbook” for the Ford GT and Sports Car Project. This is a one of one item which is kept in a safe inside an already secure facility. 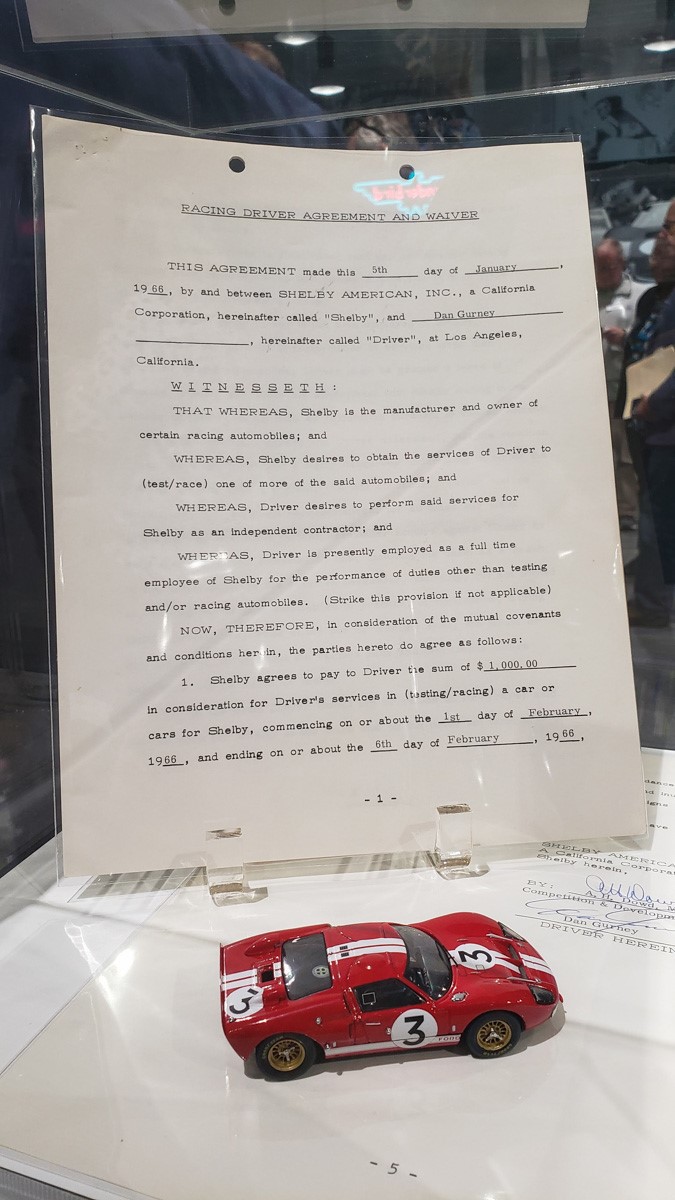 One of the dirty secrets of automotive media is that “we the media” are often given parting gifts to commemorate an event. Sometimes the most simple are the most meaningful. We were given a replica of the “You better win” postcard that Nowland has kept for all of these years. It already has a nice spot in my display cabinet. 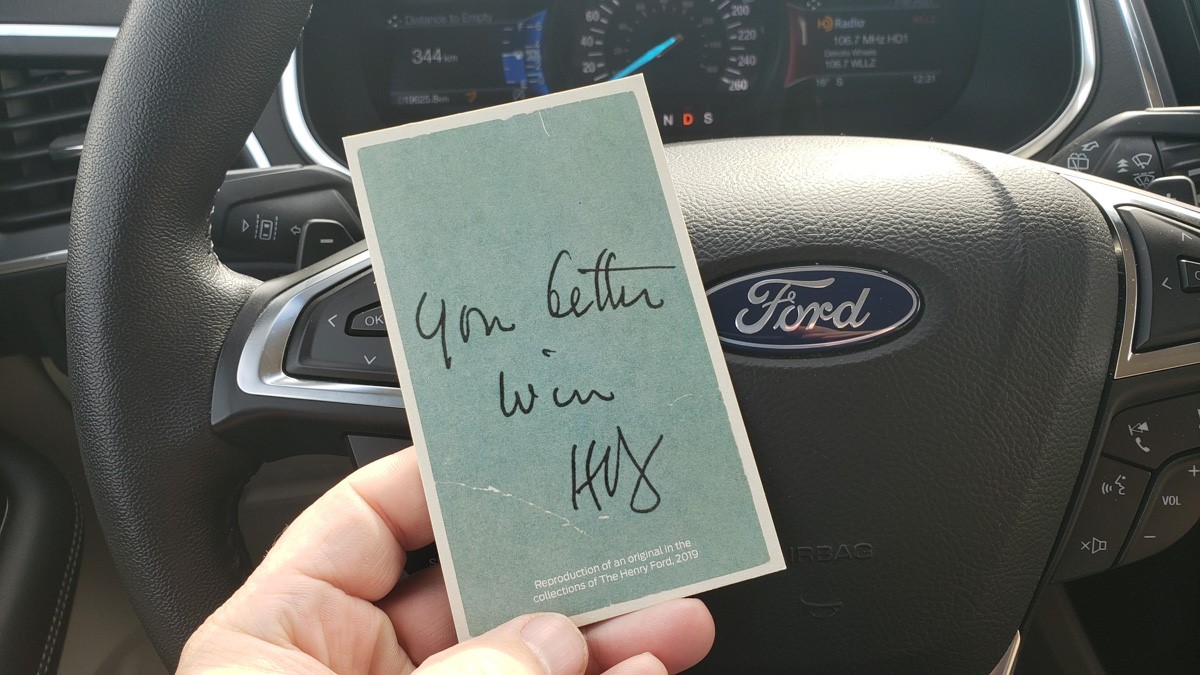 Why is that? Because it isn’t just the cars or even the racing. It is the passion of those who were involved that make Ford’s assault on the sports car racing world so special. It is the little things that they all did that added up to create an incredible moment in motoring history and being able to take part in such an event is just so special.

Can’t wait to see the movie!