FREDERICTON, New Brunswick – One of the biggest factors in measuring a vehicle’s real-world fuel efficiency is how it is driven.

Sure, a V8-powered sports car won’t be as economical as plug-in hybrid regardless of how the former is driven but driving style can have a significant impact on a vehicle’s energy efficiency.

Put bluntly, if you drive with a heavy foot with a lot of hard braking and accelerating, you’re going to quickly turn your car into a fuel sucker.

Having driven for 30 years myself, it’s a lesson I’ve had time to absorb, but to drive the point home even further there’s a special event known as EcoRun.

EcoRun is an annual event organized by the Automobile Journalists Association of Canada (AJAC) that is designed to showcase a variety of more environmentally-friendly vehicles such as pure electrics, plug-in and gas-hybrids, hydrogen fuel cell vehicles and higher efficiency gas-powered options. There were 19 such vehicles at this year’s event.

EcoRun vehicles are driven by AJAC members (of which I am one) over a period of two days on public roads with two primary objectives in mind: to raise awareness of more efficient offerings available in the marketplace, and to measure real-world fuel economy.

This year marks my third as an EcoRun participant, but it’s the first time I’ve ever been to New Brunswick, the host of this year’s event.

New Brunswick was chosen as the EcoRun site primarily because of the investment the province is making in support of charging infrastructure for pure electric and plug-in hybrid vehicles. 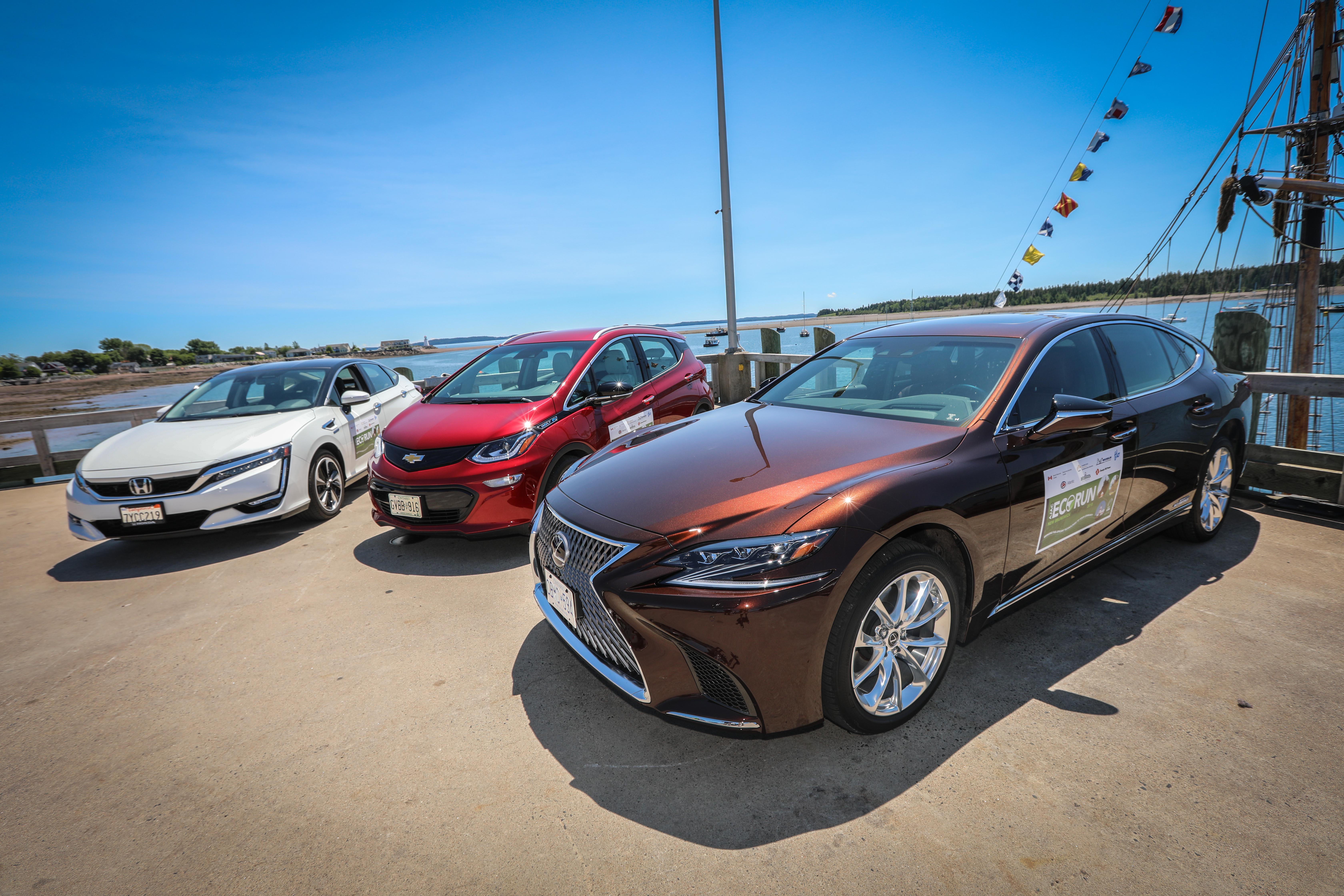 New Brunswick is in the process of more than doubling its number of fast-charging (Level 3, 400-volt) stations from 9 to 19, to go along with 12 Level 2 stations (240-volt). A fast-charger can charge a pure electric vehicle to 80 percent in about 30 minutes, whereas a Level 2 takes a few hours to achieve the same charge.

The proliferation of these stations, which are located along the TransCanada Highway and throughout the province, is significant as New Brunswick does not yet offer provincial rebates on the purchase of alternative fuel source vehicles. Clearly, the province is hoping its expanded charging network will encourage wider adoption of plug-in hybrids and pure electrics.

Another big reason the EcoRun caravan moved east in 2018 is the scenic splendor of Canada’s Maritime region in summertime – it is simply a spectacular setting.

EcoRun 2018 consisted of six legs spread out over two days. What follows is a brief overview of the six cars I drove (three each day, in order), along with the official fuel economy ratings from Natural Resources Canada (NRCan) and the observed fuel economy from EcoRun 2018. 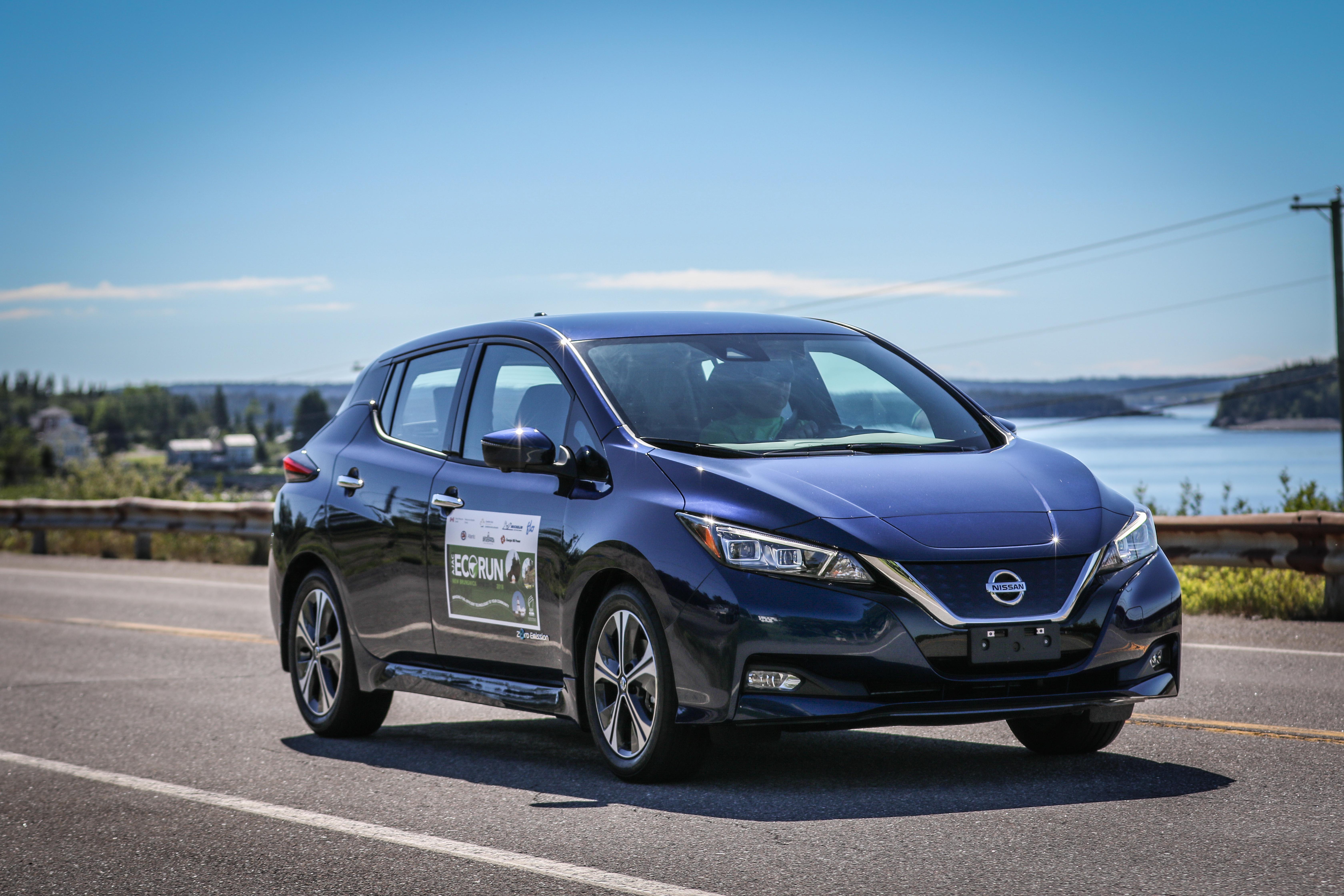 The Nissan Leaf pure electric is all-new for 2018 and offers a host of refinements, a fresh design and a slew of new equipment, including driver aids such as ProPILOT Assist and e-pedal. Power output (147 hp / 236 lb-ft.) and range (241 km) has also been increased.

My thoughts: I didn’t care for the outgoing Leaf, but I really like the new one. Sharp design, impressive autonomous tech and much improved range. 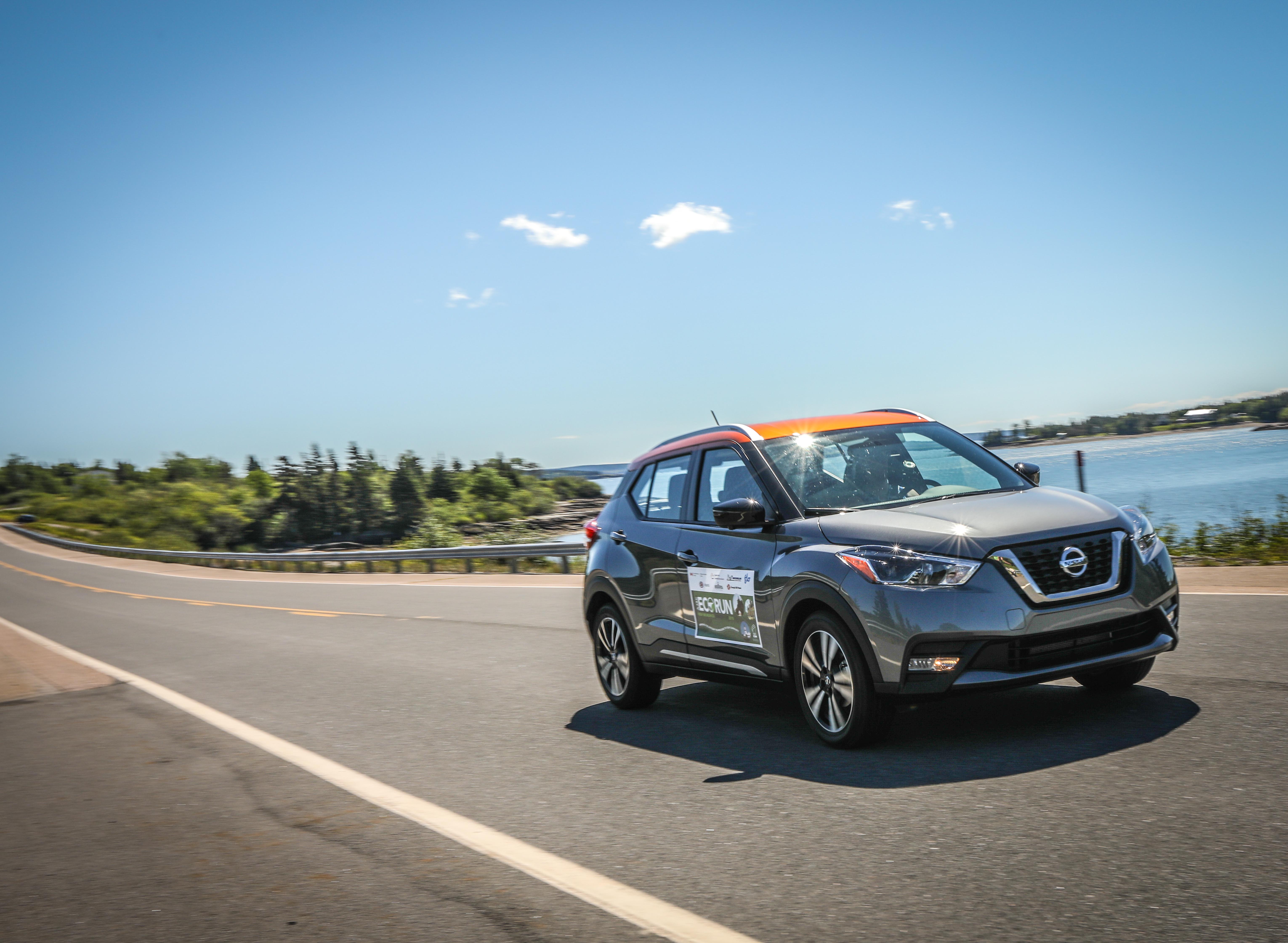 The Nissan Kicks compact SUV is a new entry in the company’s lineup for 2018, replacing the outgoing Juke. Three trims are available, all FWD-only and powered by a 1.6-litre 4-cylinder engine (125 hp / 115 lb-ft.) paired with a continuously variable transmission (CVT).

My thoughts: The Kicks isn’t going to blow you away with prodigious power, but it has a surprising amount of interior space for a small crossover and a well-finished interior. 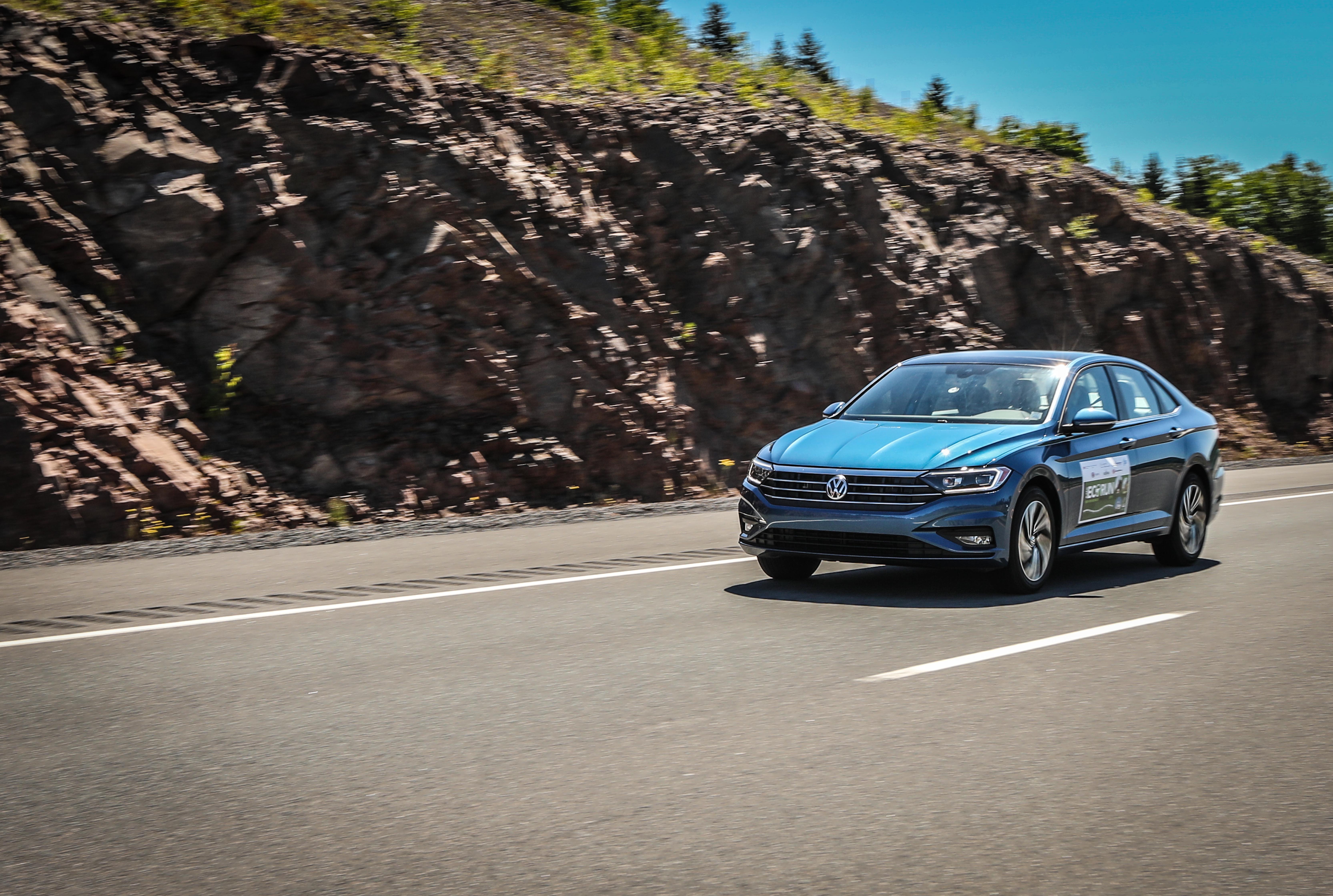 Volkswagen’s bestselling car in Canada is all-new for 2019, with a new chassis and design, more interior room and more tech. All models are powered by a 1.4-litre turbocharged four-cylinder engine (147 hp / 184 lb-ft.) that’s paired with either a 6-speed manual or 8-speed automatic (the EcoRun tester has the latter).

My thoughts: While I can appreciate the view that the new Jetta is more evolution than revolution (especially in the design department), there’s lots to like here. The spacious cabin, 8-speed automatic and slick-operating virtual cockpit are highlights for yours truly. 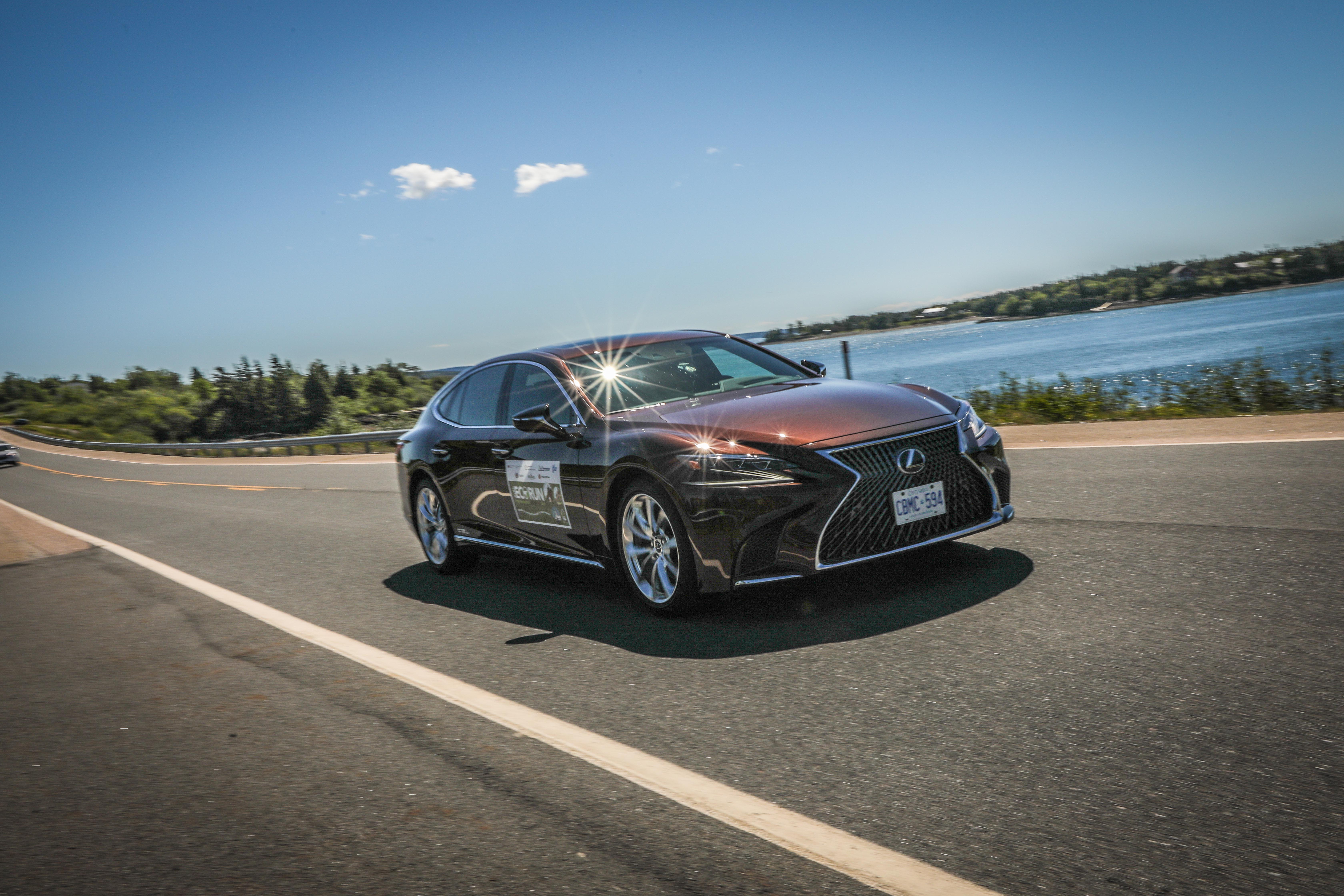 The flagship Lexus sedan is all-new for 2018 in both gas and hybrid form, with the latter being a part of EcoRun. Like the other cars I drove on day one, the LS 500h has a fresh design, a new powertrain and a pile of new tech. Among the highlights is a new multi-stage hybrid system, a 23-speaker Mark Levinson audio system and more safety tech.

My thoughts: Because I drove the LS 500h on the shortest leg, I didn’t really have much time to absorb its many features. Among the things that stood out, however, were its plush interior, whisper quiet ride and handsome looks. 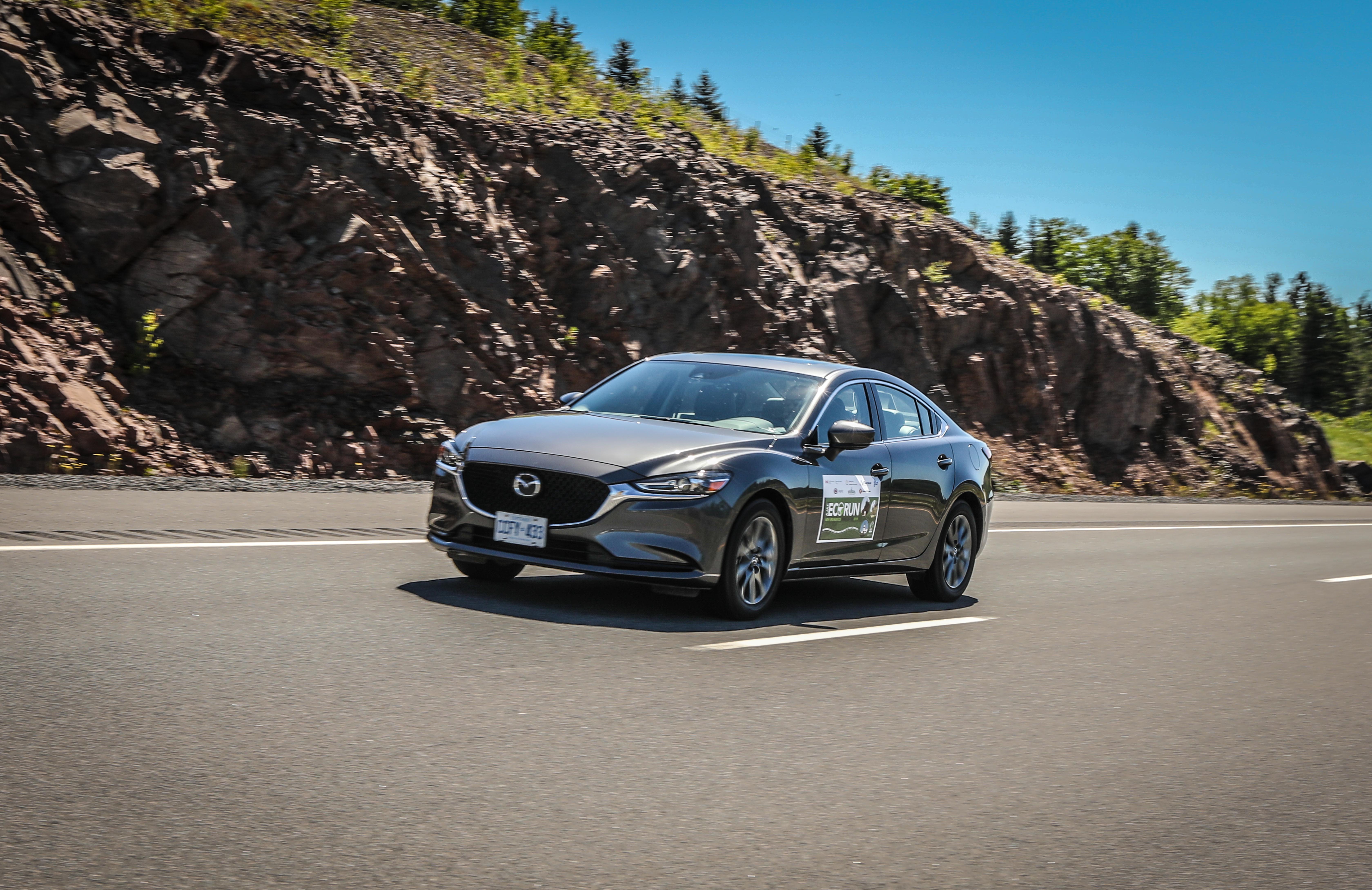 The mid-size Mazda6 sedan gets a mid-cycle styling update for 2018 that includes a new front fascia, grille and LED headlights. The interior has also been refreshed to give it a more up-market feel. Two 2.5-litre four-cylinder engines are available (one turbo, one non-turbo) that can be paired with either a 6-speed manual or 6-speed automatic.

My thoughts: The more efficient non-turbo model was brought to New Brunswick, and I can attest that it is quite efficient. The Mazda6 was a handsome, well-equipped and smooth-riding sedan before the refresh and it remains so now. 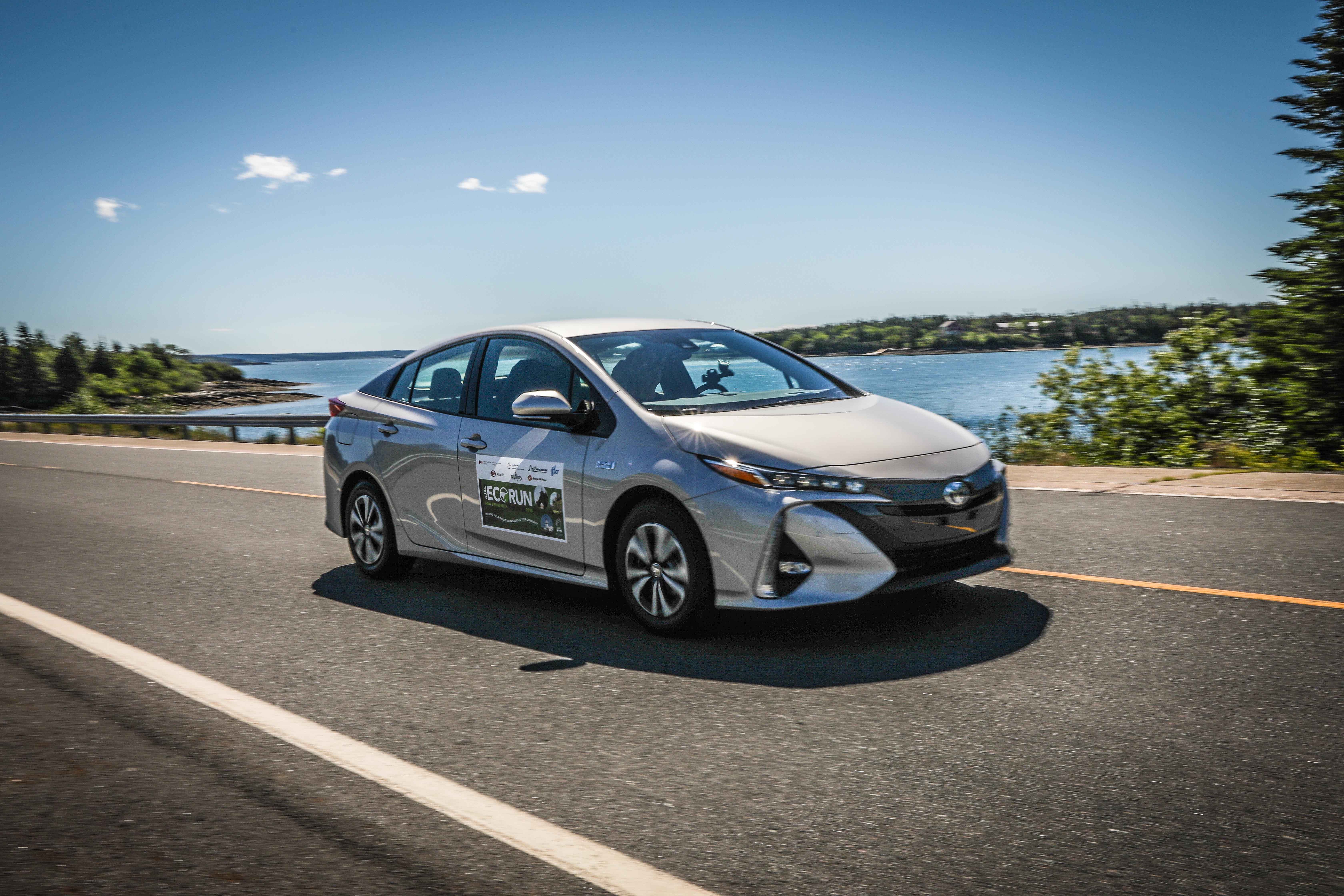 My thoughts: The Prius Prime’s looks might not have universal appeal, but I think it’s attractive especially when compared to other hybrids. The cabin is spacious, and the massive touchscreen display and cell phone charge pad are nice touches.

I thoroughly enjoyed EcoRun 2018. Having never been to New Brunswick prior to the event, the opportunity to visit such a beautiful province and soak up some of its culture was a real treat and a very memorable experience. It’s a marvelous place, and I hope to return on my own again sometime soon.

As for how I faired in the competition – yes, there is a friendly rivalry at EcoRun among participating journalists to see who could drive most efficiently – I finished mid-pack, ranking 10th out of 19, earning 9.68 points.

Without getting too far into the number-crunching weeds, basically the more efficient you are, the more points you earn. I drove the speed limit as much as possible but exceeded it in some cases to pass slower vehicles, just as I do in everyday driving situations. Wherever possible, I avoided mashing the accelerator and slamming on the brakes.

Bottom line, I did my best to not alter my driving style for EcoRun. Even though I wasn’t the most efficient, I bested the NRCan rating in five of the six vehicles I drove and equaled it in the other. I also recorded the most efficient rating in the Prius Prime.

I mention this to underline the point that it’s possible to drive efficiently and improve upon NRCan ratings just by sticking close to the speed limit and driving normally.

The vehicles at EcoRun 2018 are among the most efficient available in Canada, but you don’t need to own one to become an eco-friendly driver.

All you need for that is a bit of common sense.

Photography by John Walker for AJAC 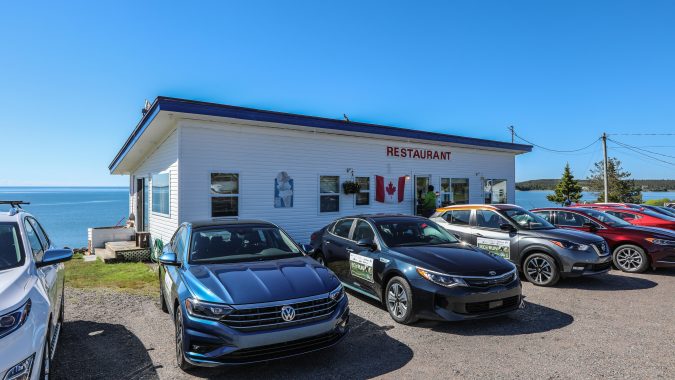 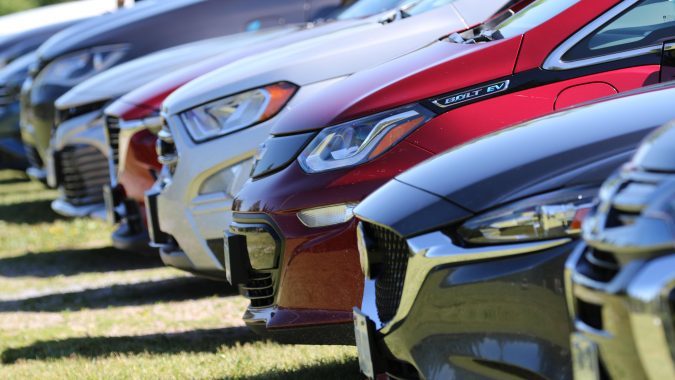 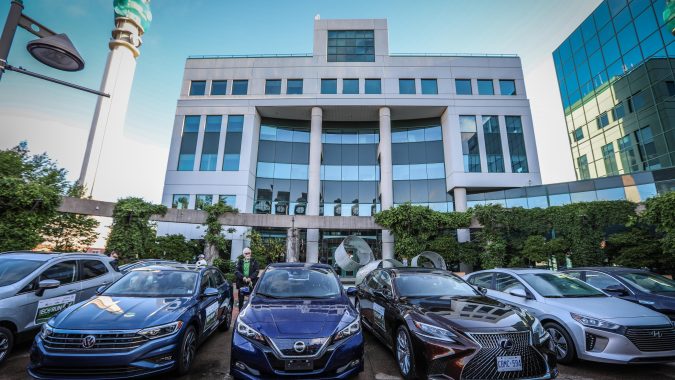 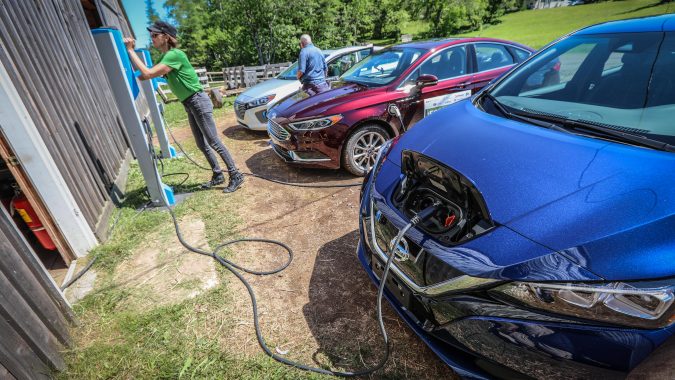 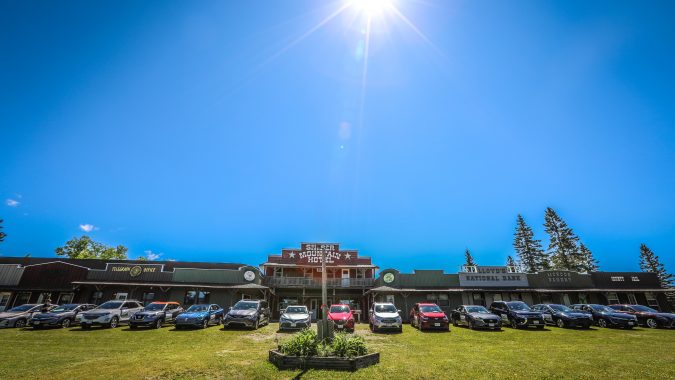 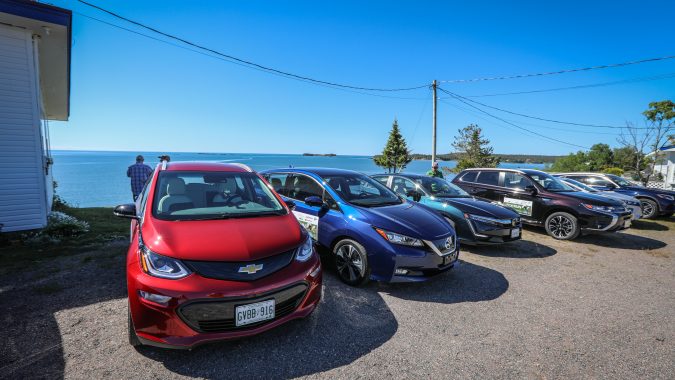 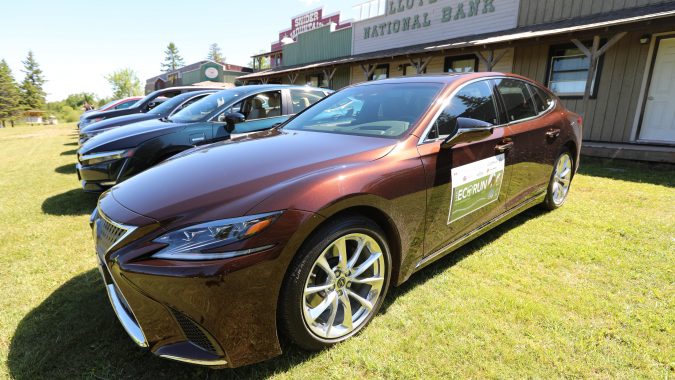 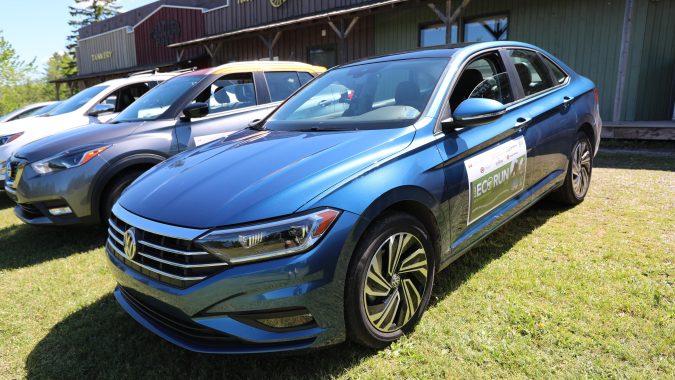 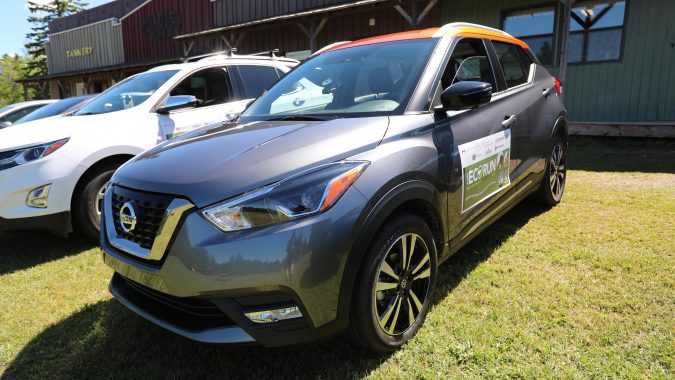 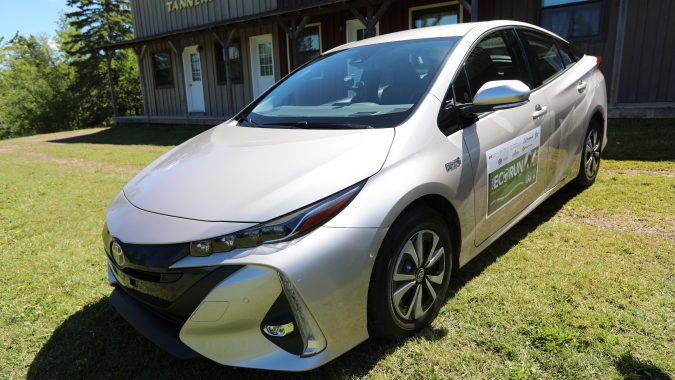 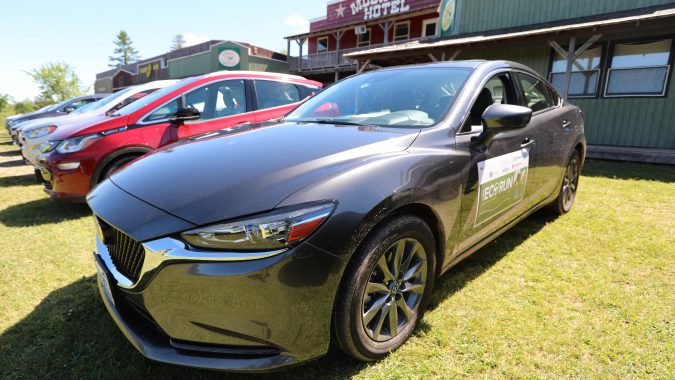 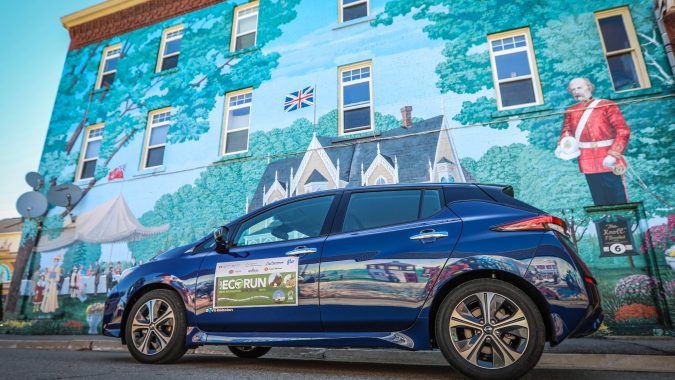