They are dedicated to becoming a largely electrified vehicle company.

MICHIGAN – “We don’t discuss future product,” has become a mantra in the auto journalism business, the most frequent response from OEMs continually queried as to what’s coming next, and when. But GM didn’t use this line once during their special EV day yesterday, which broke this cardinal rule to show 10 all-electric vehicles that GM plans to bring to market by 2025, with some hitting the market as early as next year.

Unfortunately, no phones, cameras or laptops were allowed into their top-secret design dome, and GM has not released images from the event (yet, but hopefully soon). But the unprecedented step was taken to showcase not only to media but to employees, dealers, investors and analysts over the course of GM’s EV week how serious it was about its dedication to becoming a largely electrified vehicle company.

GM moving into a mostly electric future, already there on the research side

“When you look at everything we have here, we hope that will give you confidence that we believe in an all-electric future,” said Barra, after confirming that the company is still on track to debut 20 electric vehicles by 2023, while spending US$20 billion in EV investments between now and 2025.

“We have the ability – and the responsibility – to create a cleaner planet.”

She stressed that unlike with the Bolt and Volt, these EV programs will be “profitable from the first generation,” which will allow them to bring EVs to every brand, body style, and vehicle size, said Barra.

That said, three of the nine vehicles on display were Cadillac models, which GM has said would be the lead brand for its EVs going forward, following a more traditional path of advanced automotive technology starting with higher-end vehicles, before production costs can be amortized into higher volume and lower-priced vehicles. 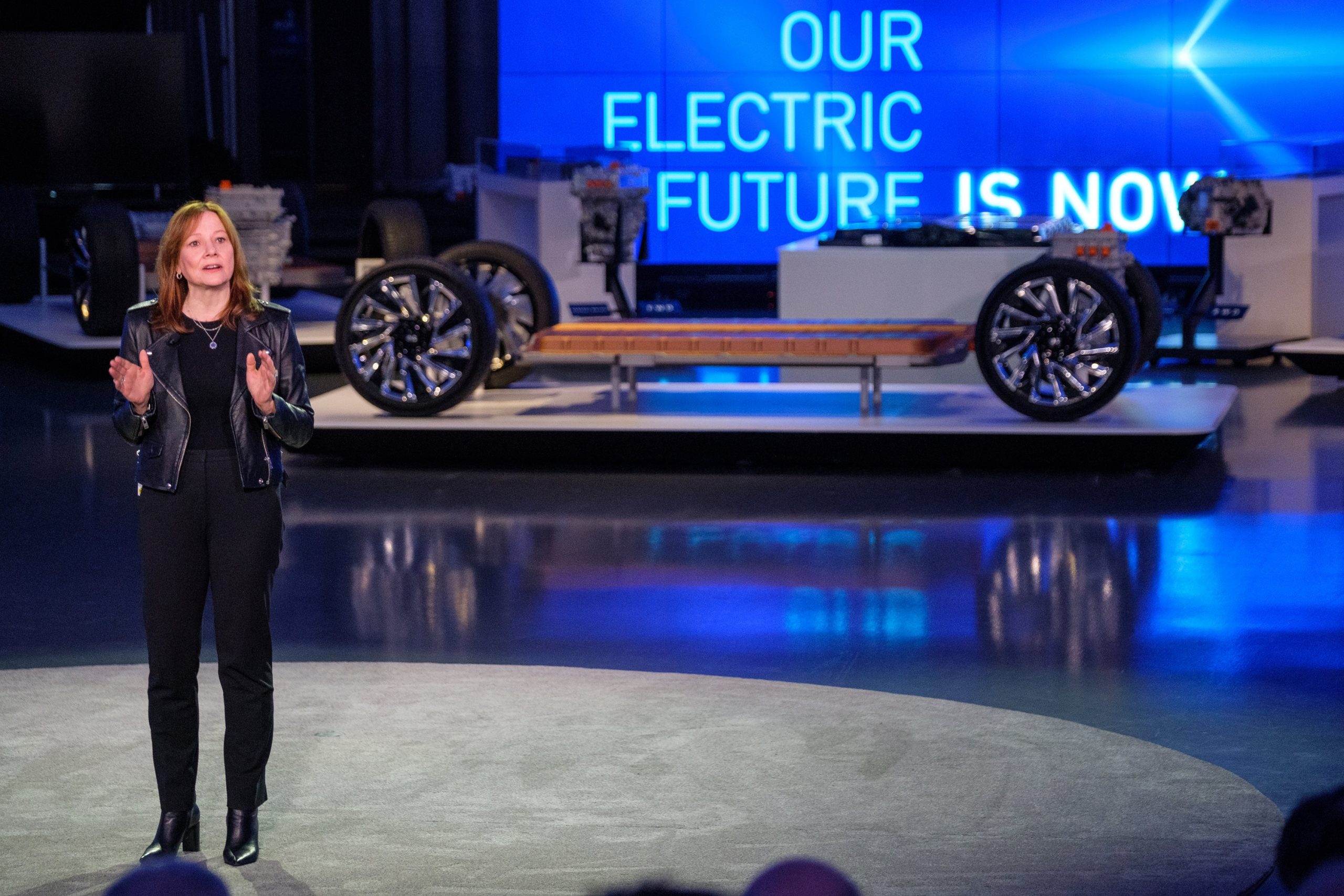 GM President Mark Reuss said the all-new third-generation BEV 3 platform would allow a huge number of different vehicles to be offered, its battery packs residing underneath passengers that provide up to 400 miles (640 km) worth of range, and electric motors capable of anywhere between 255 and 1,000 horsepower.

“This is a huge opportunity for us,” said Reuss, noting that over 60 percent of the work done by the company now is on EVs, compared to 20 percent just a few years ago, with plans to sell a million EVs by mid-decade. “It will change this company, and people’s perception of this company, forever.”

With that ambitious company shift laid out for the next half-decade, the company then took some time to discuss the products on display, especially detailing the ones closest to market launch, or at least public unveiling.

Shown at the presentation as a sleek four-seat mid-size SUV, the Lyriq will be publicly unveiled in April and will be the first vehicle to use GM’s Ultium batteries and the new BEV 3 platform.

Its front end will become the new face of Cadillac, one of the few vehicles shown here that has already been seen, at least in concept form, via released computer-generated design renderings.

Lead Cadillac exterior designer Magalie Debellis noted that the lack of a need for a grille opened up design possibilities for lines that flowed more directly into the headlights, a design theme continued inside as well, where a 34-inch wide LED panel is curved towards the driver. 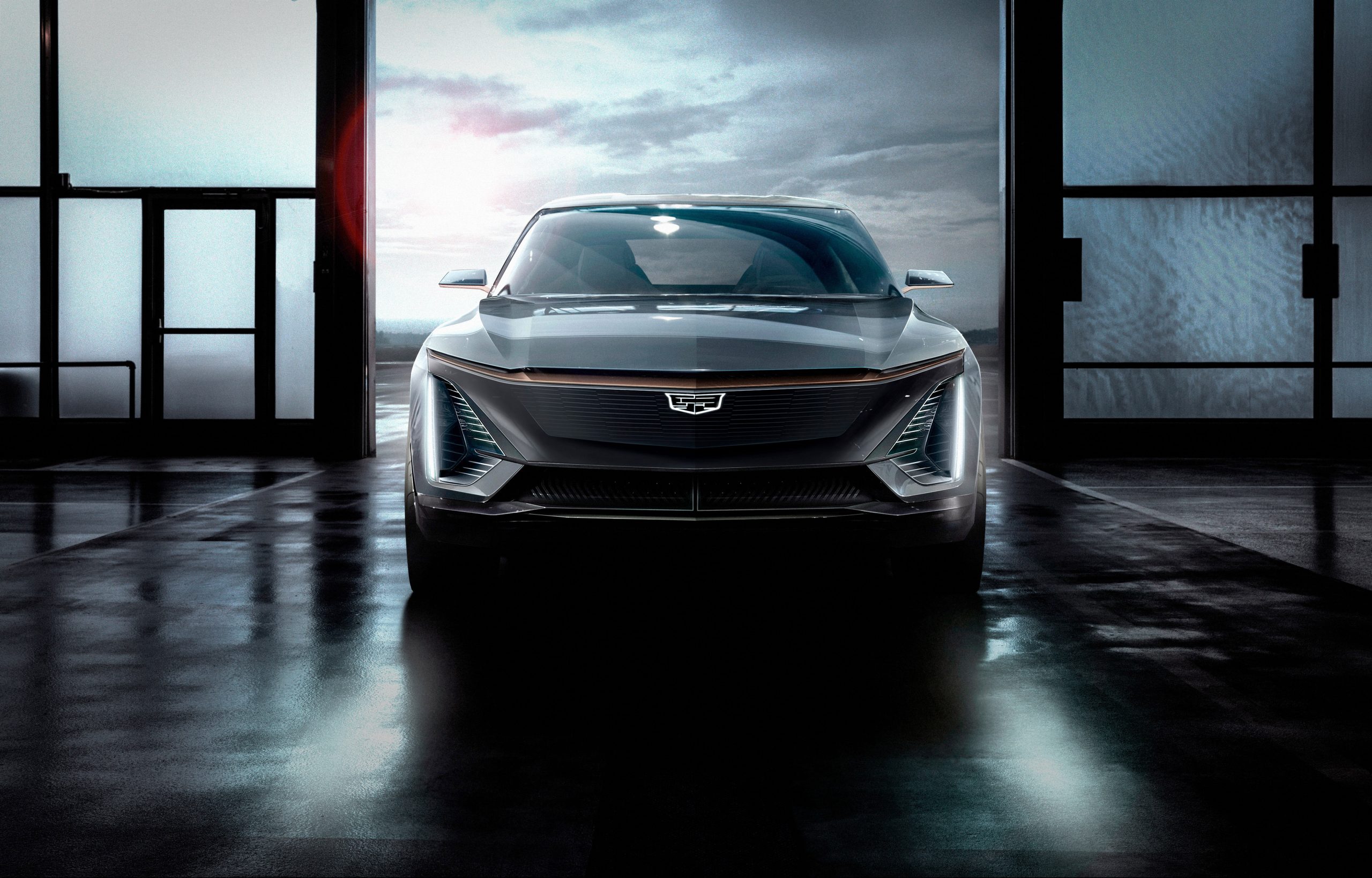 The Lyriq looked by far the most production-ready of all the vehicles on display there, outside of the slightly revised 2021 Bolt coming later this year, and the larger 2022 Bolt EUV crossover version that will still be on GM’s BEV2 platform.

A GM release on its EV event says that “Cadillac, Chevrolet, GMC, and Buick will all be launching new EVs starting this year,” though that’s different from saying these models will actually go on sale in 2020. At least one report had the Cadillac Lyriq reportedly arriving at dealers in 2022 as a 2023 model after production of the BEV3 platform is set to begin at GM’s Detroit-Hamtramck assembly plant in fall 2021. The factory will become GM’s first assembly plant 100 percent dedicated to EV production, and where the dearly departed Chevrolet Volt extended-range EV used to be built.

Clearly an early design clay model, this Chevrolet crossover is notably larger than the Bolt EUV, with blacked-out windows that prevented determining if it was a five-passenger or three-row SUV. It seemed roughly the size of a Chevrolet Blazer, while design slides behind it showed a new large 18-inch screen that suggests even mainstream vehicles will be offered with massive screens in a few years. This one was definitely closer to the 2025 launch timeframe, however.

Buick showed a pair of early design SUV concepts on the same wheelbase, describing one as roomier for families, and one a more “youthful” CUV, though they frankly didn’t immediately look hugely different. Its design slides showed it will feature a 30-inch curved screen inside.

Executive vice president of product development Doug Parks in an interview said it would take some time for battery production levels to ramp up, and therefore per-unit cost savings to decrease, making these mainstream but still upscale Buick SUVs the lower limit of where the new BEV3 architecture could go price-wise, at least early on in the program.

As teased with the help of LeBron James during the Superbowl, the GMC Hummer EV will run on the BEV pickup truck platform, with the SUT planned to become the flagship model of the GMC brand. Like the Jeep Gladiator, the SUT can go full convertible mode, with a basket handle roll bar the only thing separating passengers from the sky on the digital boards behind, though the concept SUT model on display had what appeared to be a full hardtop roof.

The Hummer SUV shares the same design language, but is a bit shorter overall, with blocky interior elements with a lunar theme, plus rubber floormats shared with the SUT that highlight its intended off-road prowess.

GM confirmed that top-line Hummer EV models will receive the max-sized 200 kWh batteries, which essentially are two 100 kWh packs sandwiched on top of each other. In this top, three-motor configuration, the Hummer EV will produce over 1,000 horsepower and a stated 11,500 pound-feet of torque (that number may come with caveats), with acceleration to 96 km/h predicted in roughly three seconds – again astounding for any vehicle, but especially one as large and presumably heavy as this one.

The Hummer will arrive fall 2021, said Reuss, which suggests the Cadillac Lyriq will hit the market earlier than that, and be one of the 10 EVs GM said it would launch in the next year.

The current 2020 Bolt already received an upgraded 66 kWh battery, helping it achieve a worthy 417 km worth of range on a full charge: the highest of any mainstream BEV to this point. But the upcoming 2021 Bolt addresses many of the long-time criticisms directed its way, specifically its cheap interior materials, very thin seats and an overall air of futuristic yet bargain-basement interior with a high tech powertrain.

The seats of the 2021 Bolt will be wider, with soft-touch materials instead of hard plastic lining the doors and dash. For the first time, the Bolt will offer a native GPS system, with new lamps front and rear, and a new pushbutton transmission to replace the current electronic 7-shaped shifter. 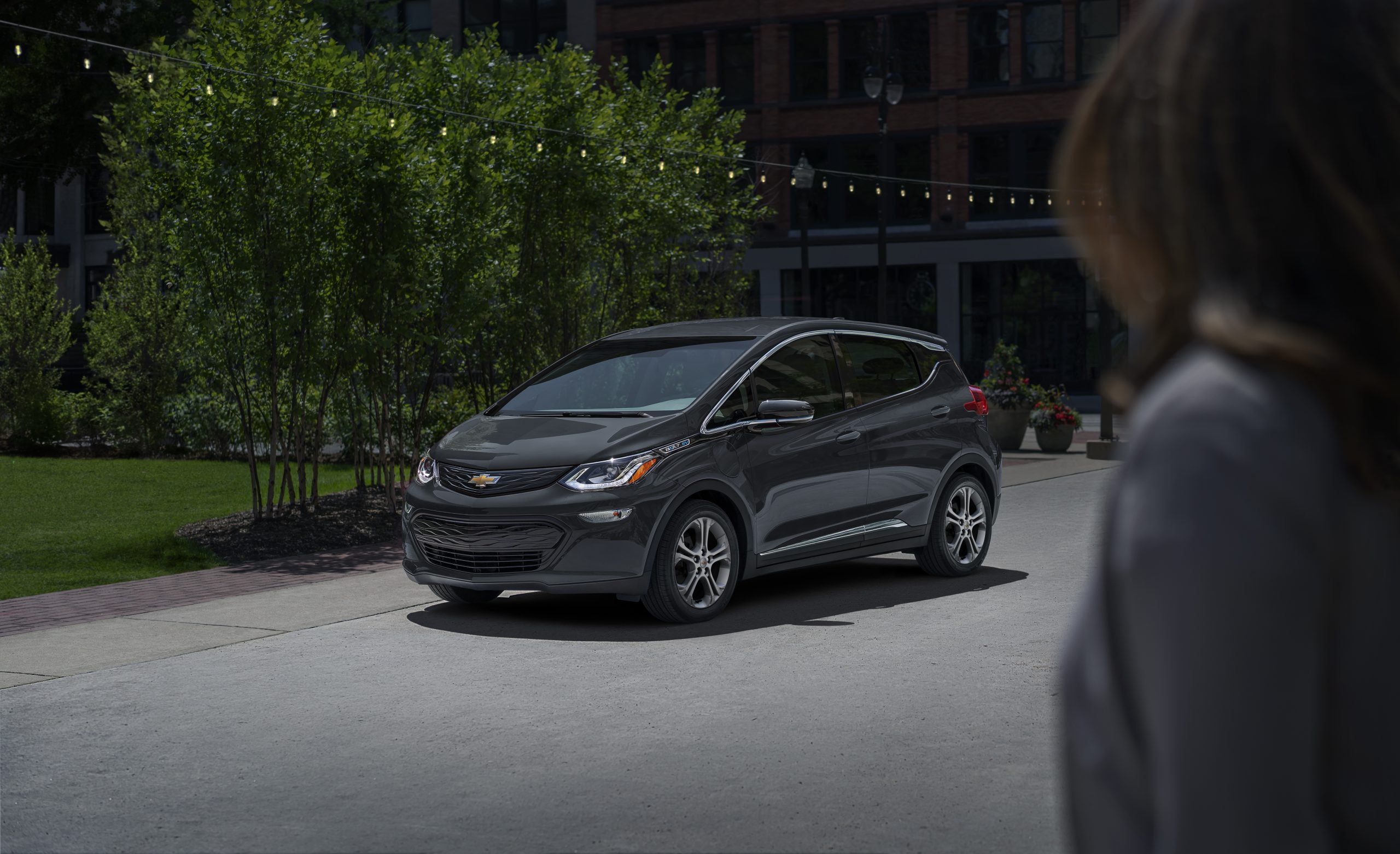 The Bolt EUV will offer a three-inch longer wheelbase, with noticeably more room in the rear seat, as well as a slightly taller roof, which will be the only Bolt to offer a panoramic sunroof. It will offer a slightly larger battery, which may produce only slightly different range figures given its taller height and presumably heavier weight. Sadly it will still offer the same max charge speed of 50 kW, GM confirmed.

The Bolt EUV will also be the first non-Cadillac to offer GM’s Super Cruise system, which will then roll out to 12 models in the following 12 months. This also suggests the Bolt EUV will likely be the first to offer adaptive cruise control, another indication of the Bolt’s notable move upmarket next year.

The only vehicle under a tarp when folks entered, company officials waited to the end of the EV event to present the Celestiq, which will be a hand-crafted Cadillac flagship “sedan,” as GM called it, but with a distinctly hatchback-like rear silhouette – more sporty Panamera Sport Turismo than stately Mercedes E-Class estate wagon.

“This is a very special vehicle that shows what GM can do,” said Barra, which will be built locally. And though GM released few details about it, president Reuss emphasized that it will be a technological showcase, for Cadillac especially, and GM as a company.

“Cadillac once defined luxury and innovation, and will do so again,” said Reuss. “This will be a full-scale technology statement – I’m looking to take this beyond Tesla, and offer things Tesla can’t.”