If you think race car drivers are fast, try listening to their spotter talk

The 105th Indianapolis 500 will go to the post tomorrow, and for the second year in a row I will miss it. Damn COVID-19.

Not my friend Jim Cooke. He’ll be there because it’s Indy but also because he has a specialized job. He’s a spotter, a second set of eyes for a driver, keeping them informed of track conditions and what’s going on around them in the race.

It’s something that he started doing for Floyd (Chip) Ganassi and continued with Arrow McLaren and now with Ed Carpenter Racing. It’s more important than you think; he also has the best seat in the house.

Born in Oakville and now living in Pointe aux Roches, Ont., he’s there – as luck would have it – to spot for ECR driver Rinus VeeKay, the 20-year-old who won the Grand Prix at Indianapolis a couple of weeks ago and who’s now considered an Indy 500 favourite.

I love talking to Cooke. He’s my kind of guy.

“Do you know how much Lady Luck plays a part in the 500?” he asked me the other day. “Add up every Andretti who ever started that race – Mario and his two boys (Michael and Jeff), his nephew, John, his grandson, Marco, and between them they must have raced more than 60 Indy 500s. They’ve won exactly one race.”

How much does determination have to do with it?

“I’ve always felt there were maybe eight guys on race morning who had the mental strength to win, who didn’t burn up so much mental energy that by the 400-mile mark, they were panting. Thinking takes up a lot of mental energy,” said Cooke, who is also a veteran racer and racing crewman.

NASCAR regularly kicks IndyCar’s butt when it comes to popularity. How’d that happen?

“The guys today, most of them don’t get it. Mario and A.J. (Foyt) kept their ‘rivalry’ going, a lot of which was exaggerated because they knew it made for good press. Johnny Rutherford used to drive around with Earl Baltes, the owner of Eldora Speedway in Ohio, just north of Dayton, and help hang posters advertising the USAC sprint car race that weekend. Do these guys today know what the Marios and the Foyts and the rest did to promote the sport before they came along?”

Cooke was a “go-fer” in the early years. He made sandwiches, went for parts, picked up 35 dinners at the local Italian eatery. In 1995 or ’96, Ganassi team manager Tom Anderson told Cooke that he didn’t have a spotter for Jimmy Vasser and to get up on the roof. That was the start of it.

“At Indy,” Cooke said, “teams have spotters in Turns 1 and 3. To get to the spotters stand in Turn 1 is complex, so it’s hard to describe. Turn 3, though, is 122 steps from ground level to the spotters stand. You have a backpack that probably weighs 20 pounds that contains radios, spare radios, spare batteries, water, Gatorade, a raincoat, hats, sunscreen and binoculars. Once there, you stay there. You don’t want to go down (to the washroom) more than once.

“Of the oval tracks, Indy is the only place where you lose sight of the car. You’re a long way away. In Turn 3, you’re about three-quarters of a mile away from where the cars pop out from behind the museum. To catch sight of your car in Turn 2 means you have to be fast because if you haven’t picked up your guy by the time they’re in line for the run down to (Turn) 3, all you see is a bunch of sparkles and as they get closer to you, they get clearer. But you have maybe a second to pick up your car, so you have to be on your toes.”

“Two years ago, Scott (Goodyear) and I had to hand off every lap with (Fernando) Alonso. When I did

(Alex) Tagliani, he wanted the radio on and me talking to him about what was going on all the time – who’s in front of me, who’s behind me, who am I catching? Some of the older guys, Tony Kanaan, for instance, he has an old-time mindset. They look after themselves. They want the bare minimum (of info) and the only reason they have a spotter is because IndyCar says they have to have one.”

Spotting at Indy is like being a caddie for a PGA-calibre player.

“You’re way beyond trying to teach him to play golf. You give him the information and then you try to keep his head in it. From time to time, race drivers blow their tops and say they’re going to kill another guy when the race is over but then they go quiet as they settle down because they might have given themselves a fright and are reacting. You try to calm them down, get them focused on the job at hand,” said Cooke

When I did this interview two weeks ago, Cooke said that it was too early for him to make a prediction about the 2021 race. But then he took a breath and said: “There are lot of experienced guys out there this year and they’re all one year closer to the end of the career. So, if you’ve got (Juan Pablo) Montoya around at Lap 190, and he gets a sniff, don’t think just because he’s 45 that he’s going to move over and let you past, Pato O’Ward.” 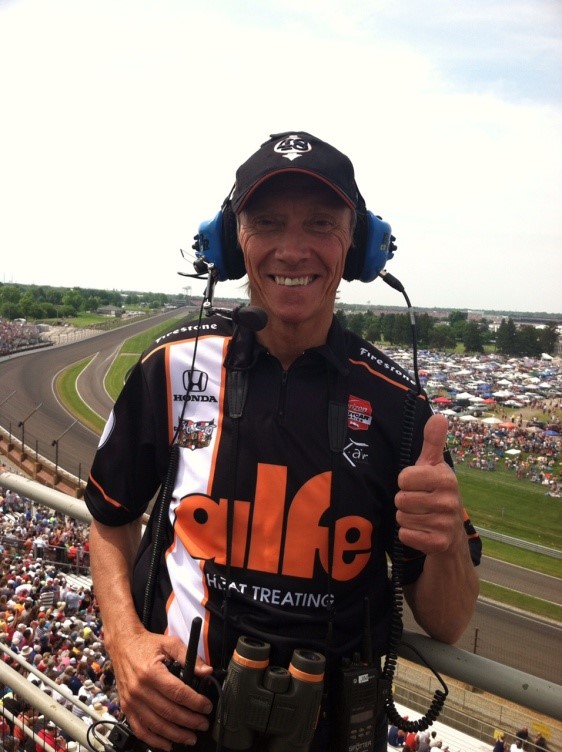