In love with the sport, Sanders is finding his position in the world of racing

When Gavin Sanders first started kart racing at age 7, he was a little nervous.

“Go-karting is a pure form of racing,” the 18-year-old said in conversation the other day, “but it can be a little intimidating if you have a bit of a fear factor. It’s something you can work through, though, if you stick with it. After a crash in a kart, you think to yourself, ‘Hey, I’m okay. It’s not the be-all and end-all.’

“I started off as a conservative driver, but I worked my way through that. And, obviously, having a roof over your head gives you a very secure feeling.”

That reference to a roof is because Sanders – a third generation karter following in the tracks of his father, Alan, and grandfather, Max – is racing this weekend in Trois-Rivieres, Que., in the Nissan Sentra Cup, a low-cost, one-make sedan championship that primarily promotes the car but also gives drivers a series that doesn’t cost an arm and a leg to enter.

Now, that arm-and-a-leg expression depends on how you define your terms. A Sentra purchased new off a Nissan dealer’s lot will set you back about $19,000 (before options, licensing, freight, taxes and all those other add-ons). A racing Sentra, with an added interior roll cage, six-point harness, racing safety seat, upgraded wheels and tires, special brakers and so on, will cost about twice that amount – although it can also be your daily drive once you exchange the racing slicks for treaded street tires.

Sanders originally got involved in one-make Nissan racing when he entered the Sentra Cup’s forerunner, the Nissan Micra Cup, in 2020.

“I got my feet wet in 2019 when I ran two races in the Micra Cup and then I did a whole season in 2020, when I was rookie of the year. It was only natural for me to move on to the Sentra Cup when they announced the Micra Cup was being phased out and the Sentra was starting.” 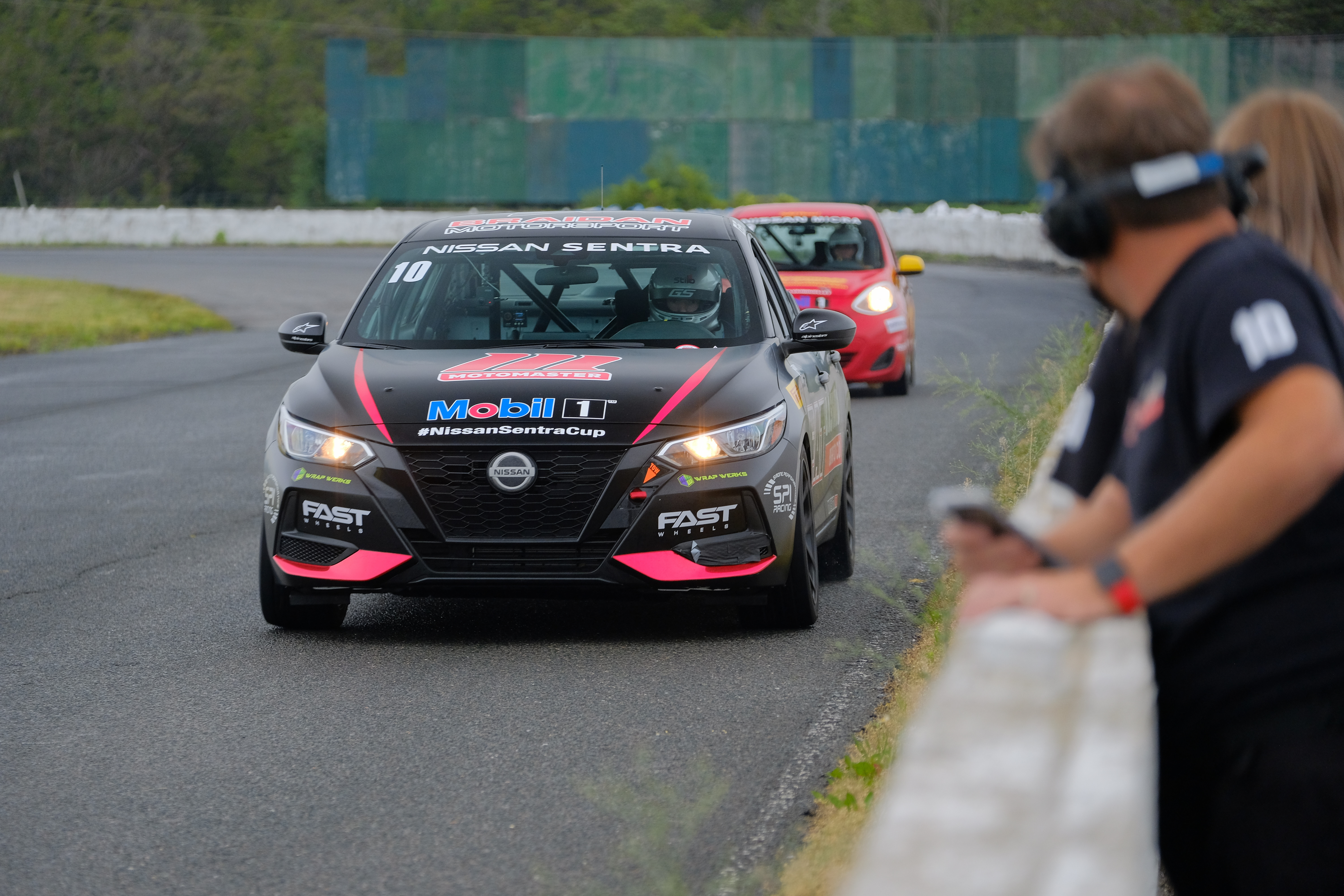 It’s kind of interesting how Sanders got to that point.

“I stopped go-karting in early 2019,” he said. “You always have to be a super-lightweight and at the track every day and with school (he attended Bill Crothers Secondary School in Markham, graduated from Sir William Mulock Secondary in Newmarket and is now studying automotive business at Georgian College in Barrie), it became apparent that you couldn’t put in that much time and effort with other things going on.

“I wanted to continue but go-karting was hard when life got in the way.”

In love with the sport, though, Sanders decided to stay in it by doing some coaching, helping younger kids and working as a kart mechanic.

“We have a friend, Vic Simone, who’s a Nissan factory-trained mechanic, who helped me after I decided to focus on the mechanical side of go-karting.  It turned out he had a Micra Cup car and so I spent a lot of time out at Canadian Tire Motorsport Park (CTMP) testing and coming to grips with driving a car at speed.

“That’s how I came to start racing cars and winning Rookie-of-the-Year. The championship contenders from the Micra Cup in 2020 were moving on to Sentra in 2021 and it just seemed logical to keep my racing CV moving forward.”

Sanders – whose father also races in the series (although he’s not doing quite as well) – started off this year’s championship with a bang. He won the first two races of the season at Shannonville Motorsport Park and was in first place heading into the races at Le Circuit Mont-Tremblant.

He didn’t have a good weekend there and, heading into this weekend’s races at Trois-Rivieres, is currently in third place in the standings. He’s hoping to get back into the swing of things as the championship progresses, with races scheduled at CTMP, Circuit ICAR near Montreal and Mont-Tremblant again, where the season will wind up.

Sanders has no interest in pursuing an open-wheel career but likes the Sentra championship because it’s closer to the touring car class he’s most interested in. “It’s an unpredictable industry but that’s something I really want to push for: high-powered touring cars.”

He’s also not interested in late-model stock cars, like the NASCAR Pinty’s Series (“It’s a different driving style, so it’s not something I could commit myself to; you have to start at a younger age”) but is looking at the IMSA WeatherTech SportsCar Championship if he decides to keep going.

“I’m a big fan of multi-class racing,” he said. “That’s why I’d like to race touring cars in IMSA.”

But first, there’s that Sentra Cup championship to win to go along with that Micra Cup rookie prize. To do it, he’s aiming to get back on the right track this weekend.