It’s Canada and winter will soon be upon us. You’ve got a new car or light truck. When driving at this time of year, expect Mother Nature to display her entire repertoire — snow, slush, wet roads and frigid temperatures, with a side order of ice.

Without hard data, consumers rely on the kid behind the counter saying, “My cousin really likes these,” or, “These are our best selling all-season radials.”

The testing group, led by well-known racer, driving instructor and tire and vehicle tester, Alan Sidorov, consisted of rally champions, advanced driving instructors as well as former RCMP and military personnel — all with the extensive experience required to operate a vehicle with consistent precision, every time.

Certain variables, such as surface and air temperatures, as well as wind velocity, were carefully monitored and tests were repeated numerous times at identical speeds with the driver completely unaware of the tire being tested at the time.

Once the type of tests were mutually agreed upon, the Kal Tire people were kept at arms length. “Sometimes, they’d check on our progress or their videographer would film but they had absolutely no influence on what we were doing,” Sidorov explained.

Kal Tire selected 19 of their most popular car and light truck tires for the testing, which took place over eight days last January. Each tire was put through 10 individual tests, including road noise, hydroplaning resistance, cornering on wet, dry and slushy pavement, cornering on ice and braking on all surfaces.

I was invited to participate in some sample tests at the Northlands Coliseum in Edmonton, a city intimately familiar with winter. Although when I was there, it was a mid-summery plus 2 degrees C with a brisk wind from the west.

The skidpad test is simply driving around a circle with the steering wheel at a constant radius, then gently applying power until the tires slide. Keeping the wheel constant is hugely important because every input with the wheel affects tire grip and renders that particular lap invalid.

Test facility skidpads are smooth and level, but the Northlands Coliseum parking lot is a three-ring circus of heaves, patches and swales with strategically placed light standards at various locations. “Please feather the throttle close to the light posts,” my instructor Joanne Younker advised, as wrapping a test vehicle around a pole is generally considered bad form. 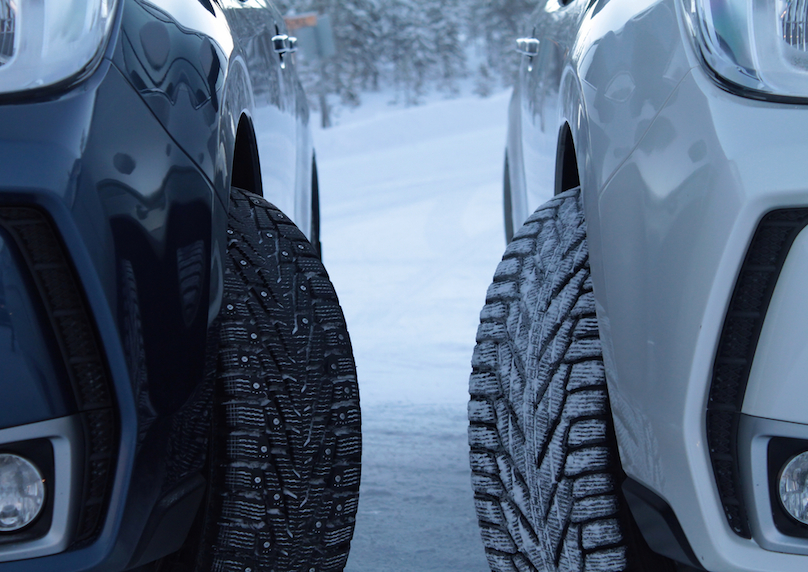 It was interesting how the surface affected grip. I kept applying power until the edge of traction was realized and when the pavement got choppy, the car slid. Joanne showed me how the instruments attached to the car logged and recorded the data, showing not only vehicle speed and maximum grip in G-forces, but also yaw rate and slip angle, telling which end of the car is breaking loose first.

After a couple of brake tests, I got my 80 km/h to zero braking down to 26 metres.

I was then handed over to Sidorov and the same tests were repeated, only this time the pavement was wetted down. It was immediately noticeable how grip diminished and how braking distances increased. I also got to blast through a water-filled depression to experience hydroplaning.

Braking and cornering under wet, cold and slushy conditions proved what experts have been saying for years — winter tires performed best, followed by all-weather tires with all-season tires lagging way behind.

It must be mentioned that Kal Tire is an independent retailer and their testing was limited only to the brands the company sells, not all tires available.

Kal Tire is the exclusive distributor of Nokian tires in Canada and the Finnish company’s Hakkapeliitta R2 was rated the best winter tire they sell. Makes sense as the Finns certainly know about winter. The best all-weather tire was the Nokian WRG3 and the Michelin Defender was rated best all-season.

Kal Tire will release the results for an additional 57 tires in Spring 2016.

All results are on the Kal Tire website (kaltire.com) and click on the “we test tires so you don’t have to” graphic. Tires are rated on a simple “one to five star” basis but for detailed data on how each tire performed, Kal Tire retailers have the info available.

Freelance writer Steve Bond is a frequent contributor to Toronto Star Wheels. To reach him, email wheels@thestar.ca and put his name in the subject line.