Inside Uconnect 5 in the Dodge Durango GT

Fiat Chrysler, now Stellantis, unveiled an all-new infotainment system, Uconnect 5, last May, and bragged about faster processing, more designers, an Android-based operating system, customization, and a host of other tech-jargon details causing adult eyes to glaze over like 13-year-old when you tell them another story about what cars were like “back in my day.” Like every other part of a vehicle, it’s not the specs that matter, it’s how the system works. So here’s a hands-on look at Uconnect 5, as found in the second vehicle to get it: the 2021 Dodge Durango GT.

It starts off with a 10.1-inch screen in landscape orientation that seems larger than some other screens with similar numbers thanks to being more square and less widescreen. It means more usable space on a bright UltraHD panel tilted just enough toward the driver to make it easier to use without making it inaccessible to the passenger.

The system will support a larger screen, up to 12.3-inches Stellantis said at the launch, and to see how many screens it can handle just take a look at the Grand Wagoneer with a digital dash as part of a total of seven screens that can all do their own thing independently of each other using the same processer as this one.

Since the chip inside, which Dodge says is five times faster than the system it replaces, can handle that, you’ve probably guessed it does just fine in the Durango GT, which is probably the most basic application for the system, at least so far.

Ultra-quick and seamlessly smooth scrolling of the TomTom-powered built-in navigation is the most obvious benefit, and the system maintains its smoothness even if you’ve switched to the configurable home screen which lets you pick multiple panels and pick how many windows (up to four) you want on each screen panel. The default in our tester had a three-screen layout with navigation on the left, with audio display info top right and phone call info bottom right. The factory layout worked just fine for me, and included impressive details like showing the satellite radio channel graphic on the audio screen as well as displaying podcast art when using the included wireless Android Auto and Apple CarPlay functionality

The nav system gives you 3D-rendered buildings in downtown areas, handy for finding landmarks and hidden intersections, and it can even give you “last-mile” directions, for when you have to walk from your parked vehicle to your final destination, through the Uconnect phone app. 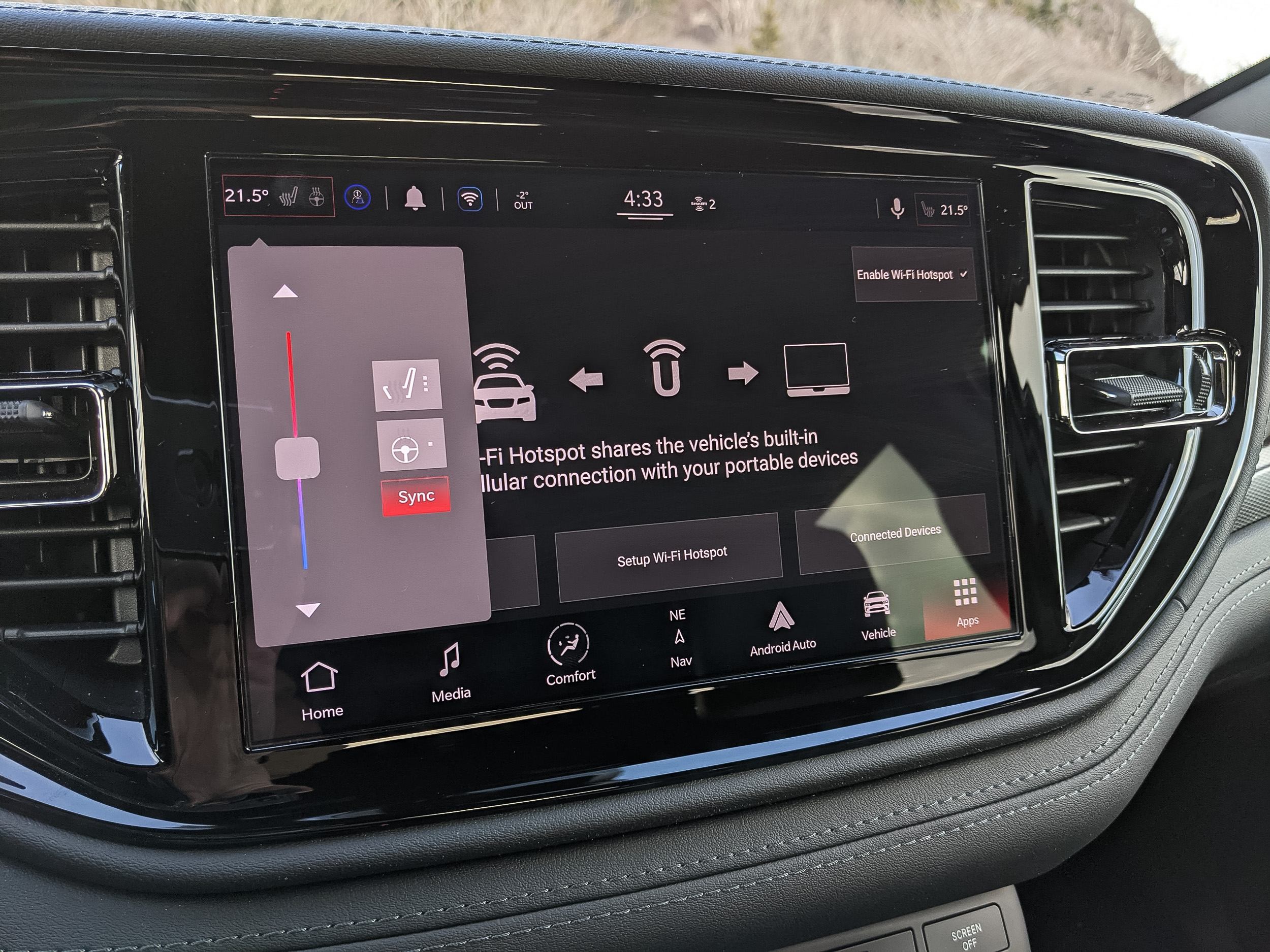 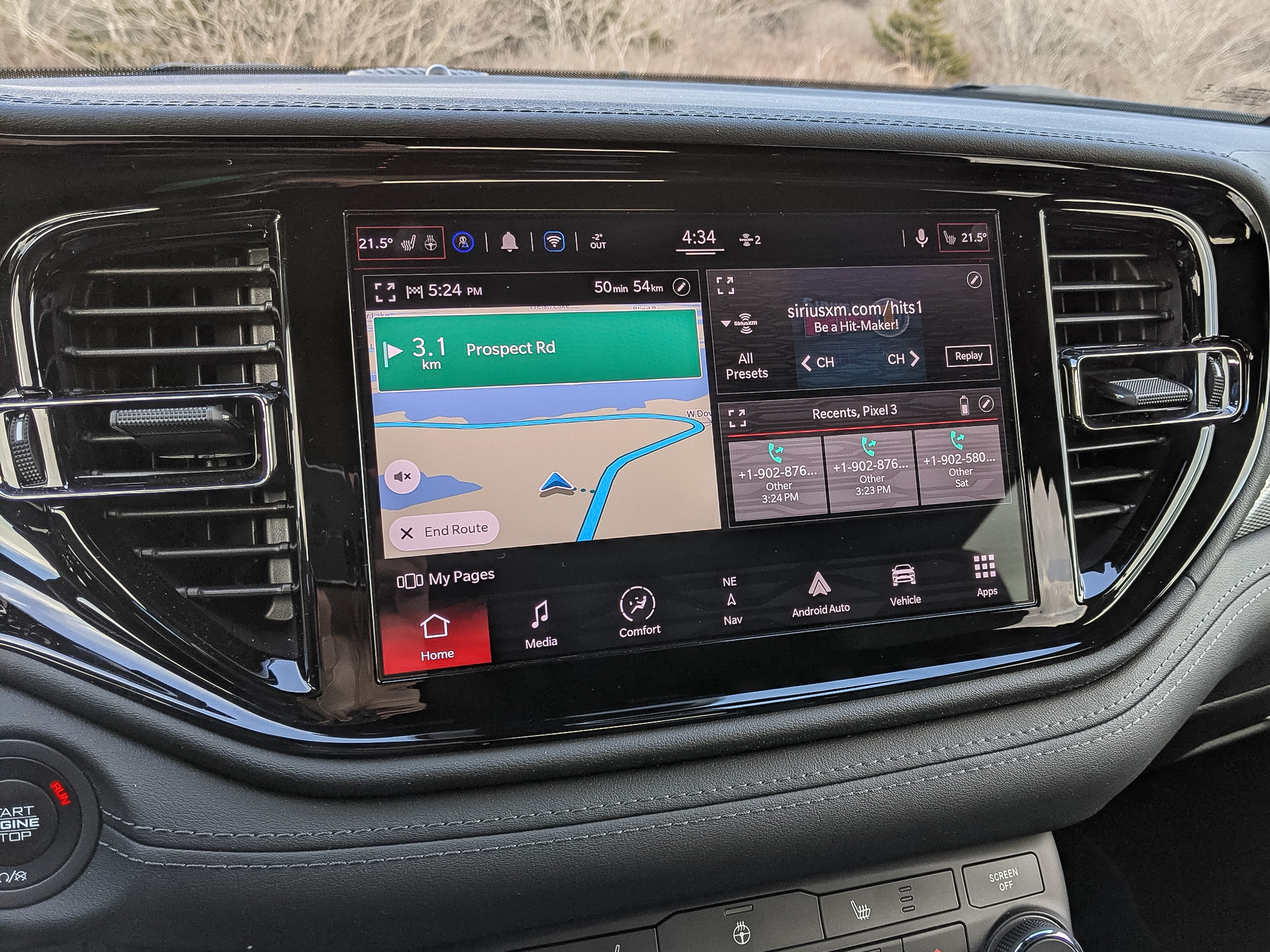 One of the best features of the multi-layout screen is one benefitting any vehicle with multiple drivers: user profiles.

Switching profiles is a one-touch affair doing more than just switching the center screen to the graphics you want. Thanks to the system’s integration with the rest of the vehicle, Uconnect gives each profile its own audio pre-sets but, more impressively, seat settings, climate control settings, and even the position of your side mirrors. I remember the fights between my six-foot-four dad and five-foot-three mom back in the days of manual seats and a passenger mirror only adjustable from the outside, and this level of profile settings feels like magic.

Usability, long an issue with many of the high-tech systems, is well handled by Dodge and Stellantis here. You can control nearly every bit of the climate control using clear, well laid-out, and large buttons located below the big screen. There is a real volume knob plus one for tuning, so you can do everything with your gloves on in winter.

If you want to do everything using the screens, there is a great big climate button that takes you to the full screen, but you can also tap a little icon on the top left or top right of the screen (one for driver, one for passenger) and get a large on-screen slider for climate temp, heated (and cooled if equipped) seats, heated wheel, and for the driver, a Sync button. All of the important controls are just a single touch away, rather than buried in menus like they were in older systems. The top-of-screen shortcut bars can be picked by the user, letting you drop ones you don’t want for a simpler appearance.

If you have a surround-view camera equipped, another buried feature in the last Uconnect (and most other makes), there’s a top-of-screen button available for the function, making it about as easy to use as is possible without just saying out loud you want the screen on. 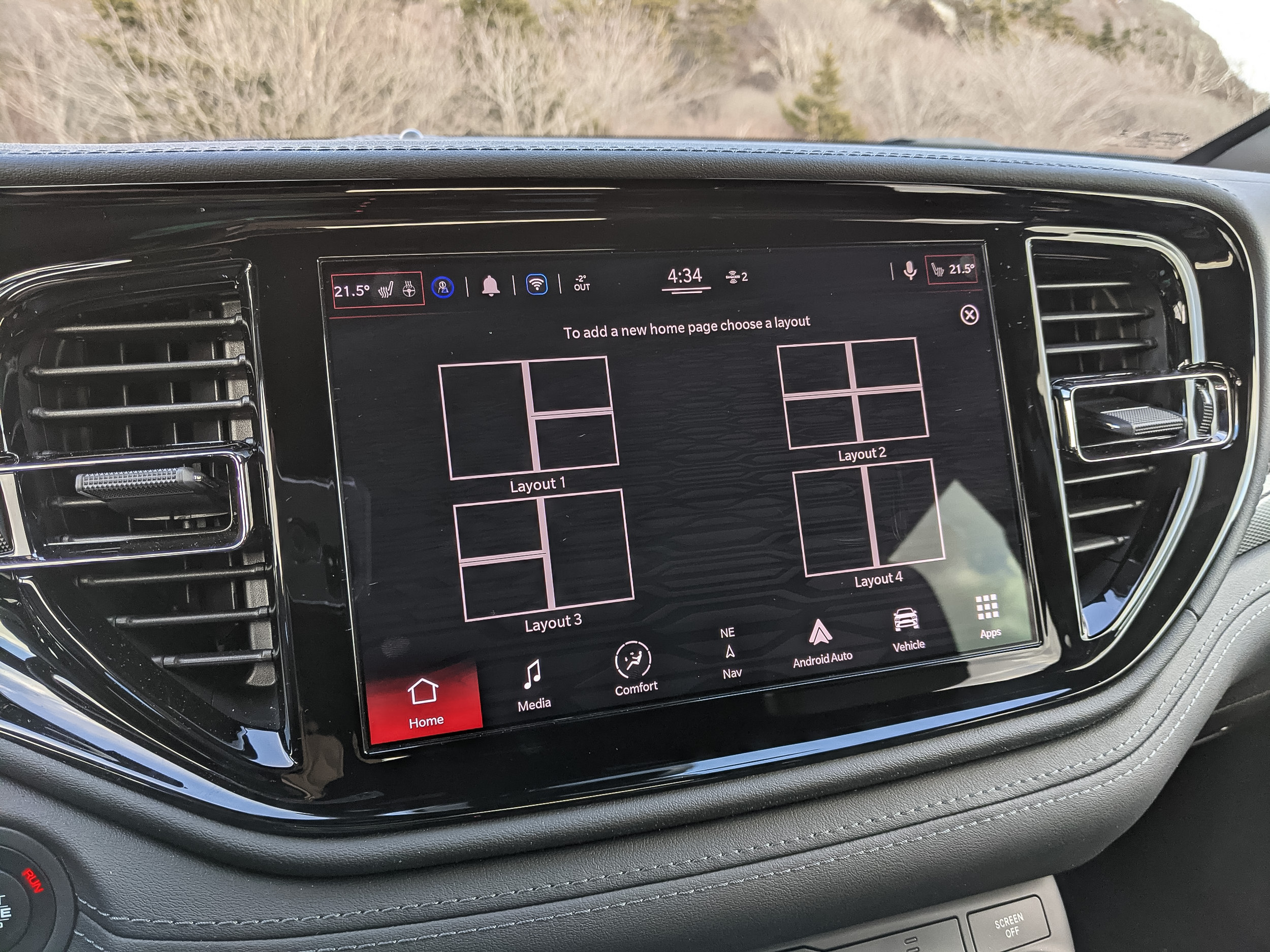 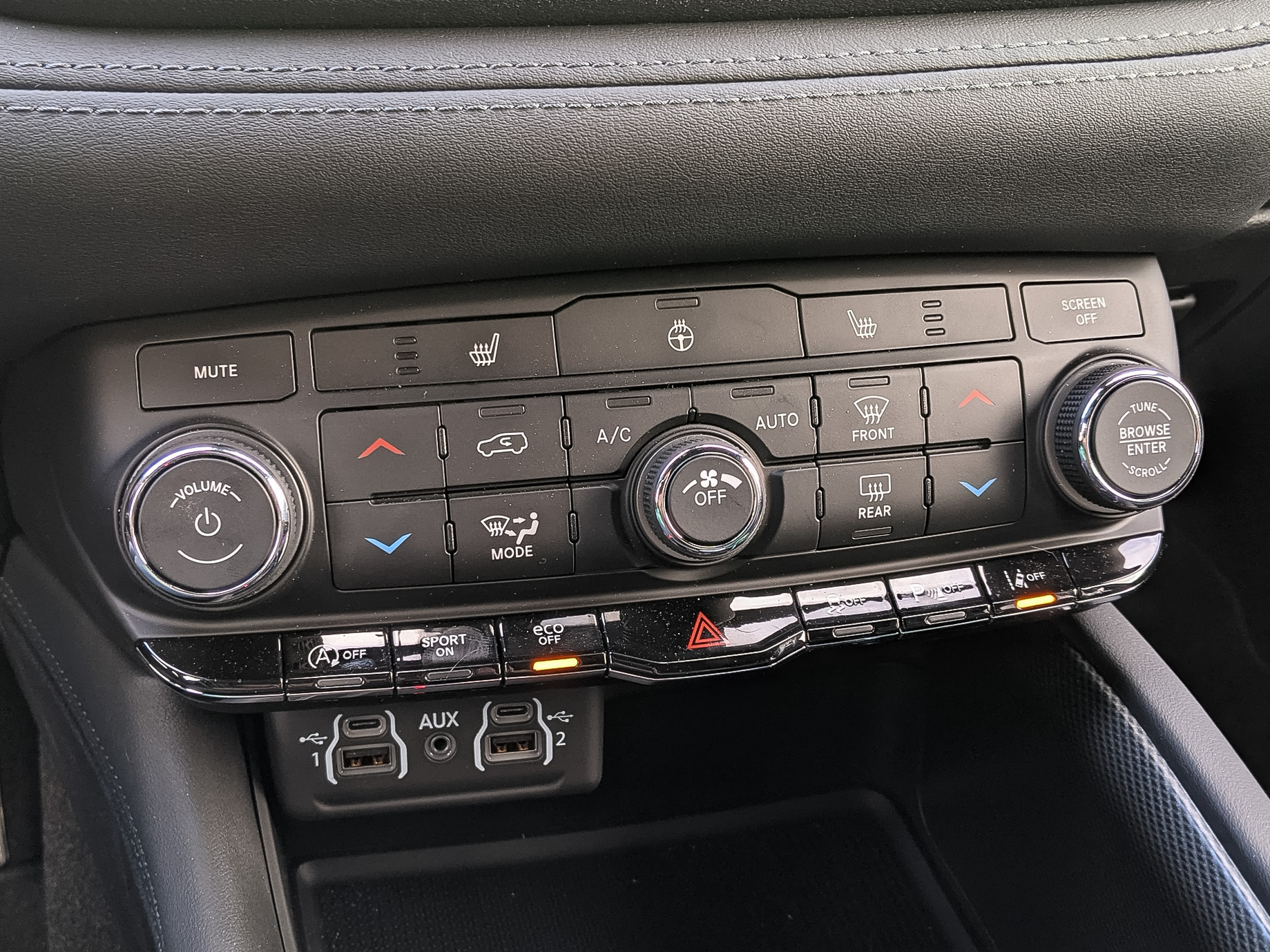 Which, for loads of controls, you can actually do. New software and hardware for the voice recognition system can better understand you, even if the windows are down or you’re driving in the rain. It can also tell the difference between driver and passenger speaking, which lead to a lot of frustration until I opened up the owner’s manual (I know, right?) to find out the button on the top right of the screen was for the passenger and mine was on the steering wheel, or I could have just used the “Hey Dodge” voice prompt. Once I figured out that part, it worked great with natural speech capability that understood commands as varied as “I’m cold” to turn up the heater, “turn it up” to raise the volume, or “find a gas station” to, well, find a gas station without any of the usual trying to figure out what the specific words the system needed were. Those gas stations came with prices hovering above then, useful if you’re in a place where a block can save you a buck, though it’s not clear how often prices can be updated.

In-car infotainment systems can quickly make a driving experience better, or over the long-term make your expensive new-car purchase a frustrating burden every time you get in, and you rarely have a chance to even begin to exercise them during a normal showroom test drive. Uconnect 5 makes itself one of the best on the market, not with fancy tricks (it’s missing some of the latest and greatest like augmented reality, at least for now), but with ease of use, smoothness, responsiveness, and by managing to give you real buttons for those who want them combined with making the virtual buttons easier to use and, more crucially, easier to find without taking your hands off of the wheel. This is the first system I’ve experienced where I would be willing to give up my buttons for screen-only, and with OTA updates available, Stellantis is just getting started with this system. For more of what it’s capable of, look to the Jeep Wagoneer which can stream multiple Fire TV feeds, even letting the front passenger watch their own shows with rear seat occupants not needing to share.