Elon Musk tweeting a truck of war between the Tesla pickup and Ford’s own truck has led to some seriously heated interactions on Twitter and across the internet. With debunking, new challenges, and a weigh-in from Neil deGrasse Tyson. So let’s take a look.

It all started with what looked like a pretty simple clip. A Cybertruck pulling a tires-spinning F-150 backwards up a hill. As of now, that tweet has nearly 117,000 retweets and 700,000 likes. Say what you want about Musk, but he knows how to put on a show and bring in an audience.

Soon enough, Jason Fenske of YouTube’s Engineering Explained slid into the mix with a video talking about the physics and engineering side of the video. With a subtle headline that’s the norm for YouTube of “Tesla’s Cybertruck Tug-of-War Stunt Was Pointless.” In it, he explains why truck Tug-of-War isn’t the best test of truck might it might seem to be. Fenske also debunked Ford’s own F-150 towing a million pounds video from a few months back.

He explains, using a whiteboard full of math, that torque isn’t as important as gearing. While the electric truck likely makes far more rated torque than the F-150, the torque converter and gears of the F-150 mean that torque wasn’t the deciding factor. He points out that this appeared to be a rear-drive F-150, compared with the AWD Tesla, meaning that the Tesla has more traction and can exert a greater force. Finally, if it was really an uphill tow, it’s not actually making things harder for Tesla and easier for the F-150. It puts more weight on the Tesla’s wheels and gives it an even bigger weight-based advantage. 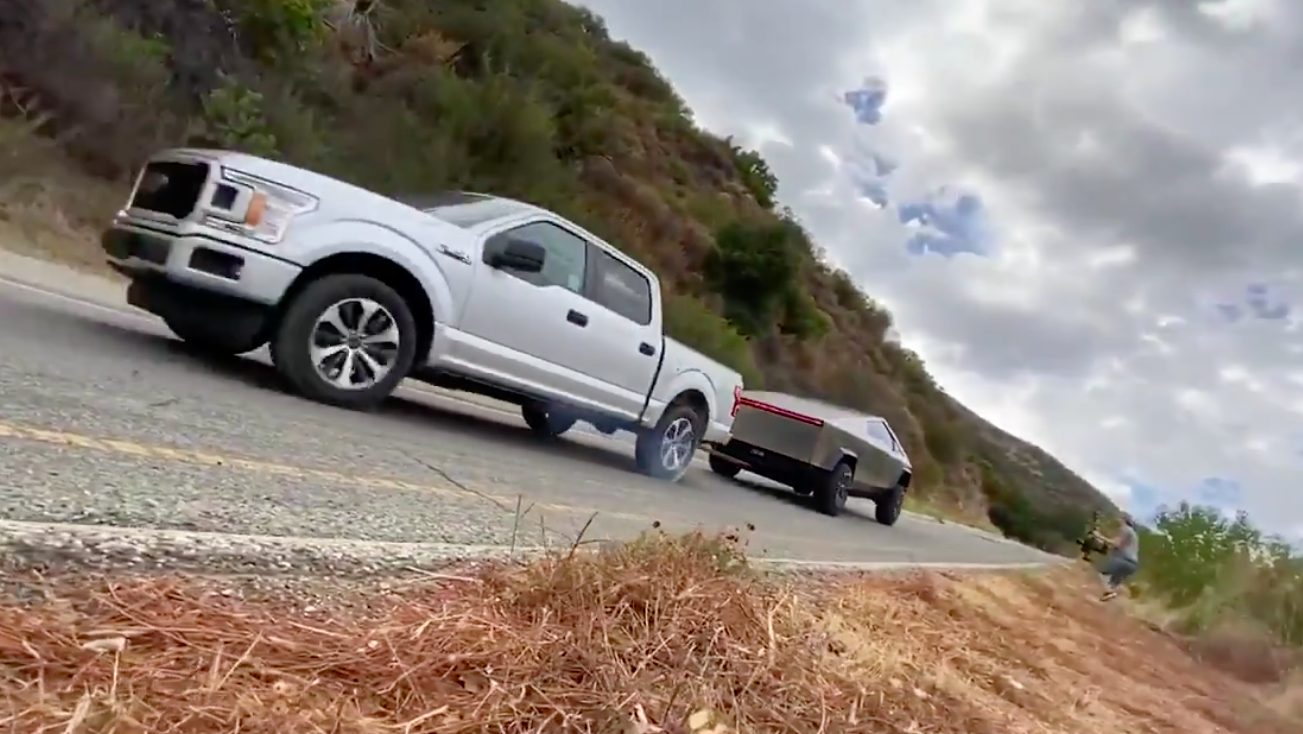 Finally, noted Twitter Astrophysicist (and real astrophysicist) NDG weighed in, pointing out the same thing. The truck of war is about weight over the driven tires, not what the engine or motor can do. Musk, of course, has a rebuttal that “electric motors also have insane torque.” Fenske’s video shows that the torque advantage isn’t what it appears, especially if a 4×4 F-150 was using low-range, and NDG points that out too. He suggests loading up the F-150 and retrying the test. In short, whichever vehicle is heaviest will win, unless one breaks traction and the other doesn’t. Then the one with traction will win.

We all love Torque. But high Torque just spins a tire in place if there’s not enough weight to provide traction. Fully load the F150, giving highest traction to its rear wheels, then try to drag that up the hill. I otherwise agree: Load both to the max and the highest torque wins

Ford, of course, isn’t sitting idly by during all of this. Or at least its team isn’t. Sundeep Madra, a Ford VP for its in-house tech incubator immediately issued a challenge to Musk to send them a truck for an apples to apples test. Ford hasn’t made any official statement about it, but you can bet that there are some marketing and tech people in-house who would love to put Tesla’s truck claims to the test. After all, the pickup truck is the home turf of one-upmanship.