After an extended absence from the off-road trails, the Defender nameplate is back, appended to a vehicle that is at the same time instantly recognizable yet with all four wheels firmly planted in the 21st century.

It starts with the company’s D7x architecture draped with square bodywork that does a solid job of paying homages to its roots while ushering the Defender into the modern SUV era. The 110 model, shown here, is a four-door machine with minimal front and rear overhangs, promising jaunty approach and departure angles ready to tackle off-road’s toughest. An upright stance and Alpine windows (those slim portals of glass resting atop the roof’s edges) are tremendous call backs to history. Yes, for better or worse, the tailgate is still side-hinged with a spare tire hanging off it.

Canadian customers will be able to choose between a turbocharged four-cylinder engine, badged P300, and a six-cylinder Mild-Hybrid Electric Vehicle (MHEV) powertrain, badged P400. The smaller powertrain produces 296hp by way of a twin-scroll turbocharger, accelerating from 0-100km/h in 8.1 seconds)

The stouter P400 MHEV powertrain has a few power tricks up its sleeve, harvesting energy normally lost during deceleration and redeploying it to optimize performance. The inline six-cylinder gasoline engine features both a conventional twin-scroll turbocharger and an advanced 48-volt electric supercharger. A belt-integrated starter motor replaces the alternator to assist the gasoline engine under acceleration, while the 48-volt lithium-ion battery stores energy captured as the vehicle slows down. In combination, these technologies provide 395hp and 406lb.-ft of twist, pushing the new Defender to 100km/h from rest in 6.1 seconds. 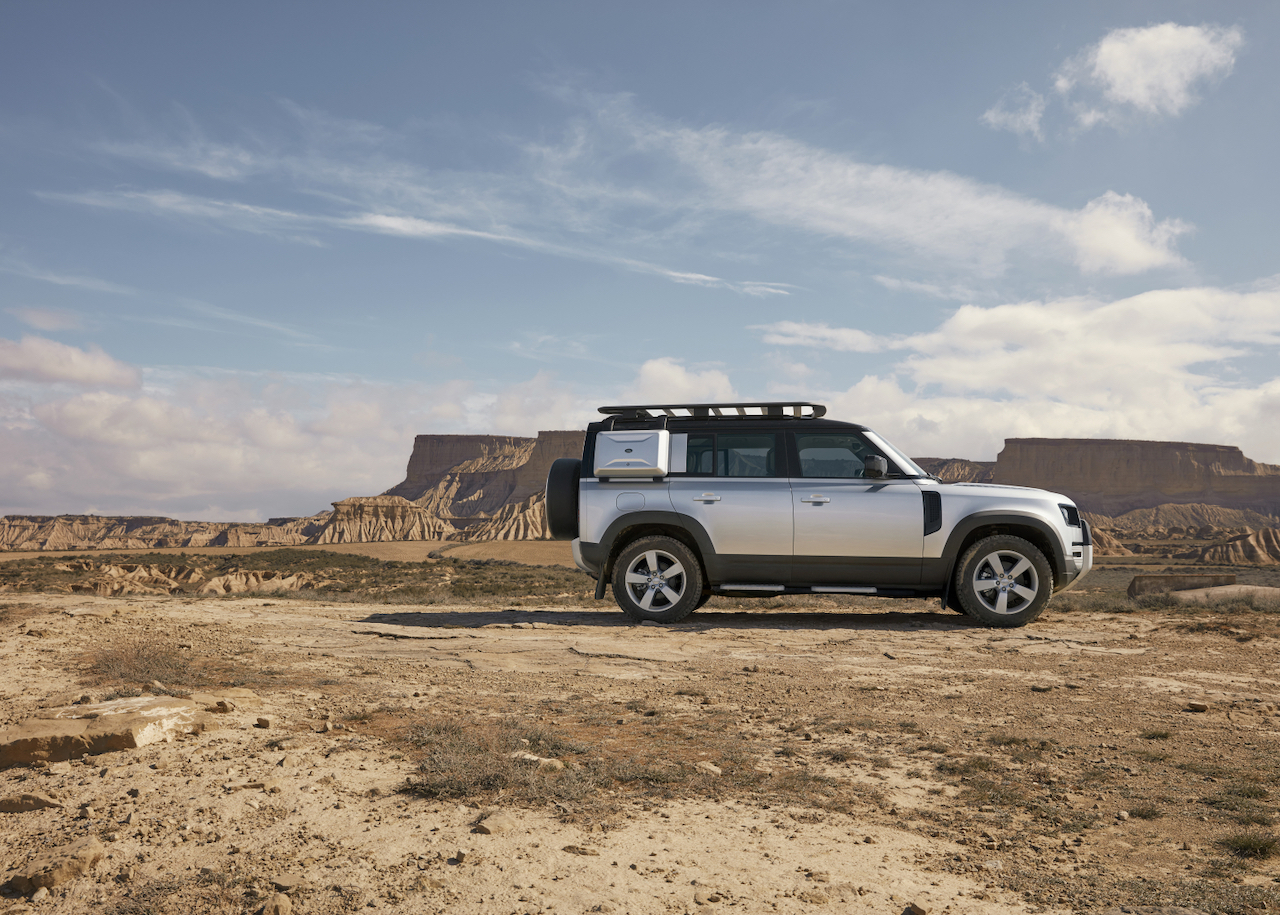 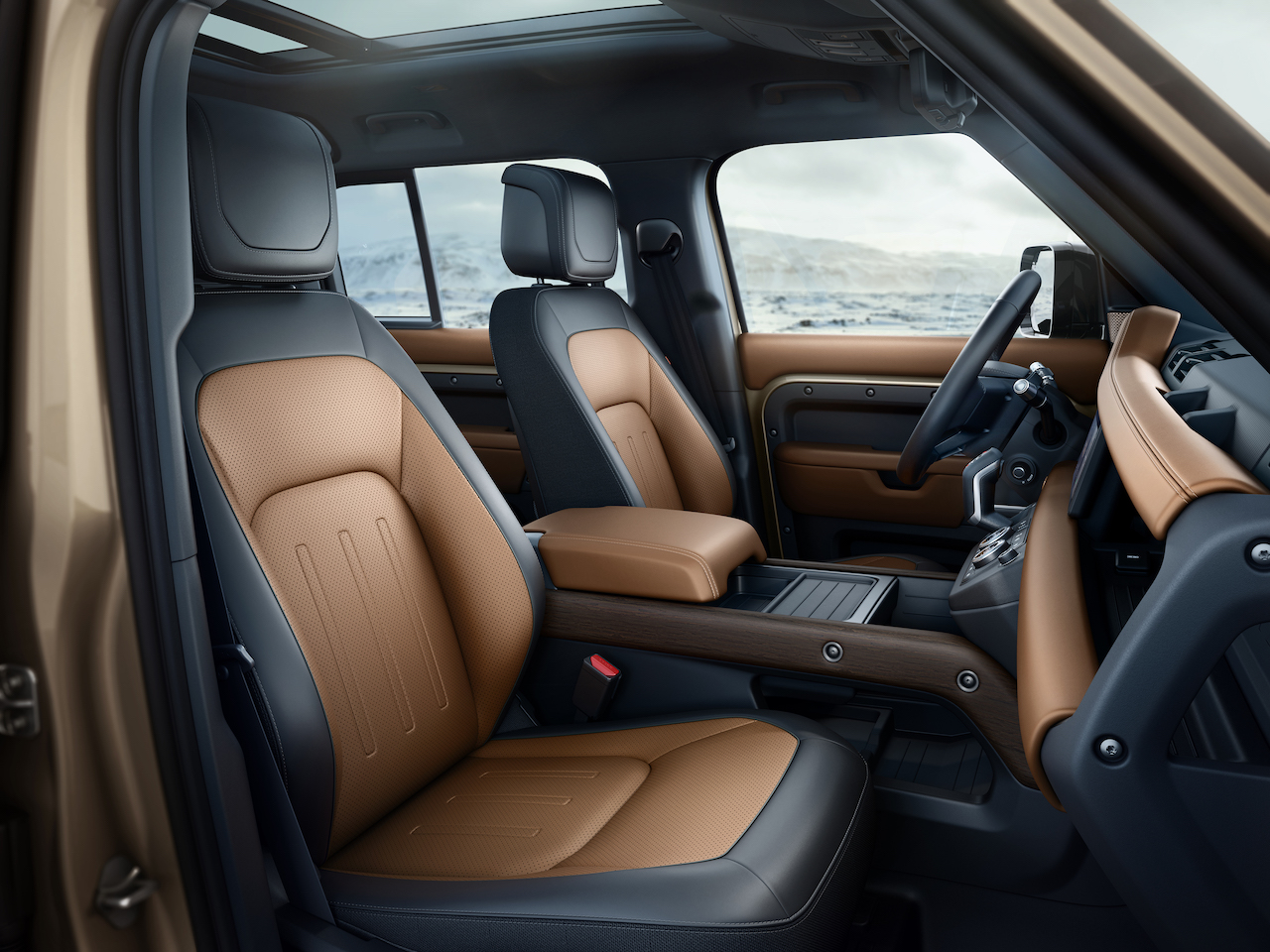 It wouldn’t be a real Defender without a raft of off-road kit, of course. On board is a new configurable Terrain Response system, allowing customization of the 4×4 gear and throttle response depending on conditions. A twin-speed transfer box and locking center diff, plus active rear and locking differentials, allows the driver to blast through peat on their way to the fox hunt. Maximum fording depth is 35.4 inches (900 mm).

In addition, a quartet of accessory packs are available, ranging from an Explorer Pack that includes a stout roof rack to an Adventure Pack, which has a 6.5L pressurized water reservoir for washing and a trunk-mounted air compressor. Payload tops out at 1984lbs (900kg) while towing is good for a strangely specific 8201lbs.

Fans of the brand will also find a lot to like inside, with the Defender featuring the brand’s expected level of luxury and technology. Touchscreens, a variety of banging audio systems, and enough power ports to keep every device fully charged are abound in the interior. The interactive driver display spans an impressive 12.1 inches.

Prices are in line with what one would expect from a purveyor of luxury goods. Entry level Defender S opens with a bid of $65,300, marching through the $76,000 SE and $81,700 HSE before resting at the $93,600 Defender X. The latter is the mountain goat of the range and, with its Terrain Response 2 system and electronic active diff, has the biggest off-road chops.

Squared-off styling that pays homage to its roots while packing itself full of luxury and off-road features? It’s safe to say Land Rover will have no trouble selling every one they can build.