There they were, construction cranes, advancing like an army, building more and more condos and townhouses

Although I wrote a column about Highway 413 several months ago – the Bradford Bypass has since become part of the conversation – I have been keeping notes of broadcasts and columns arguing against their construction. Here then, in true reactionary fashion, are some of my observations.

I like public transit. I don’t drive into downtown Toronto anymore, taking the GO Train and subway instead. My wife and my two boys feel the same way. But that’s during the work week (even if people are working at home). The weekends are something else. Saturday is when people go shopping and to the mall (or the cottage, in summer) and public transit is completely incapable of handling the crush. Sunday is worse because GO and the TTC reduce their service. So people need a car. And yet the 401 is a parking lot, particularly near the intersections of 407/401 and 400. The 413 and the bypass would take away much of that congestion.

I got a laugh out of a picture used to illustrate an anti-Hwy 413 article in the Star written by a city hall columnist (natch). Those highways (407 East and 412), plus the 418 further east, were paid for by the taxpayers of Ontario. They were built by the McGuinty-Wynne Liberal governments that expropriated working farms and cut through wetlands and parts of the Green Belt running from the 404 all the way out to Highways 35 and 115. WAIT!! Isn’t that what we’re hearing about Highway 413? It didn’t seem to be a problem when the Liberals did it (didn’t hear a peep of protest, did you?).

After I wrote my first column about this proposed highway, I appeared on a panel on Vision TV and one of the other panellists seemed genuinely surprised when I told him there wasn’t one working farm left between north Oakville and Milton. What was deserted pastureland five years ago is now covered by townhouses and golf courses. I like to hit golf balls at a driving range at Trafalgar Road and Burnhamthorpe in Oakville. I was doing that the other day and I looked up and there, maybe a concession away to the south, were the construction cranes, advancing like an army, building more and more condos and townhouses. This is happening everywhere around Toronto. I saw no indication that public transit was either being built or improved to service those new neighbourhoods. So how are those people supposed to get around? By car, of course. That’s why you need the 413 and the bypass, and more like them.

One of the arguments against highway construction these days is something called “induced demand.” I understand the theory because of a phrase in a baseball movie: build it and they will come. Translation: build more roads and more people will drive and nothing will be solved. My friend Frank Notte says if this is true, you might as well not build anything. The first time I heard of induced demand was years ago when I would debate former Star columnist Christopher Hume in a wheels.ca video series called Smackdown. Chris would argue against highways and cars with the same enthusiasm he wrote dozens of columns criticizing the car or doing anything that would make getting around Toronto by car easier. We usually taped these debates on Thursday afternoon because Chris liked to leave work early on Friday. He would get into his car and drive out of the city to his place in the country, where he spent most weekends. 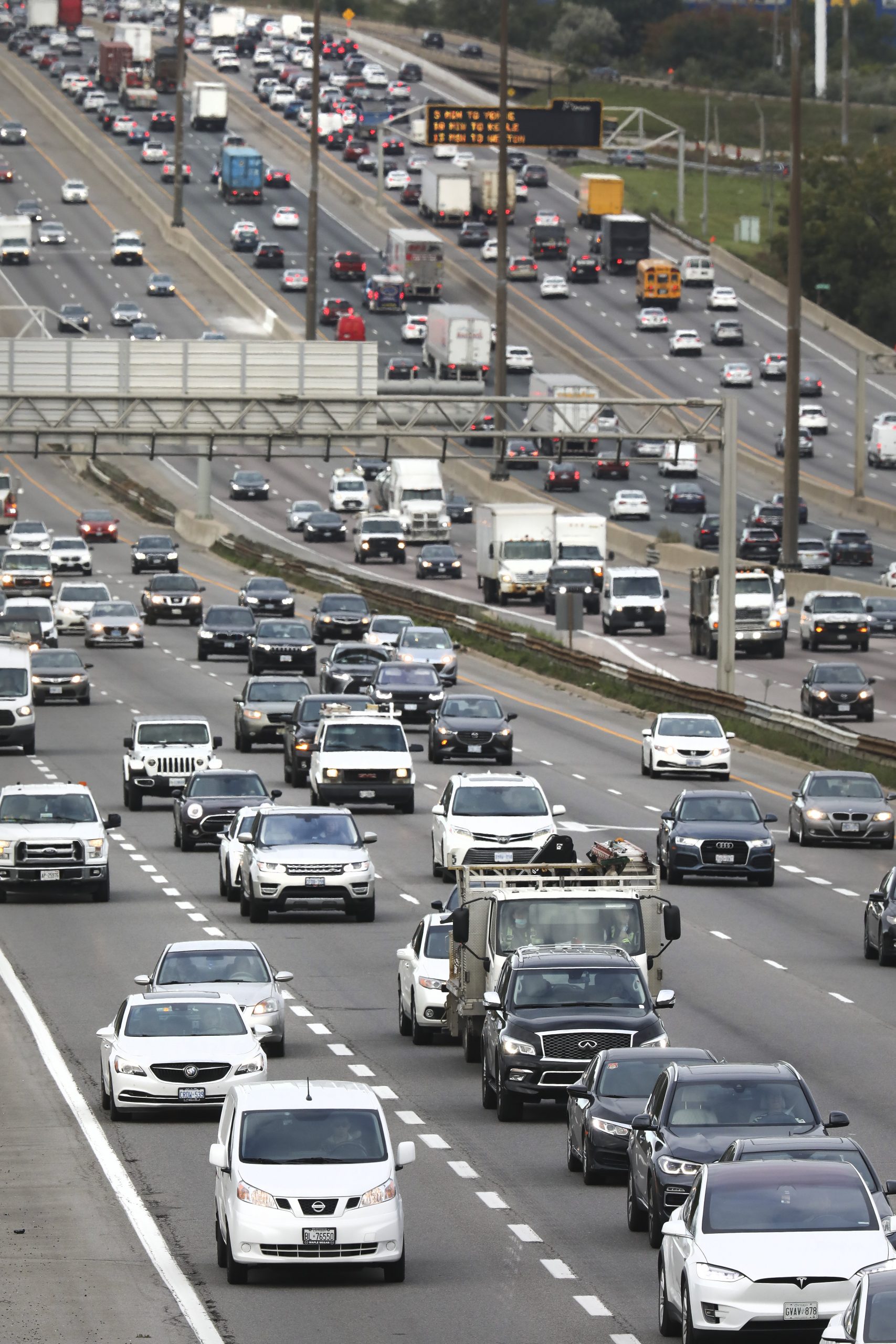 TORONTO, ON – October 1 Morning commuter traffic is seen along highway 401 looking west from Don Mills road.
TTC transit ridership isn’t coming back quickly and strongly, and some are worried about it entering a “death spiral” of cuts and rider drops and cuts and drops. Meanwhile traffic is already back to 85 per cent of pre-pandemic levels and most people aren’t back to work yet, and some experts are concerned rush hours are going to get worse than ever before.
October 1 2021 Richard Lautens/Toronto Star

Highwy 413, at one time, had pretty much unanimous support. That was when the Liberals were doing the building. Kathleen Wynne was on political death row and, seeking to impress the anti-car crowd, cancelled it (which happened about the same time she showed up to officially open the Canadian International AutoShow) and then some of the municipalities concerned started to change their minds too.

Let’s take Peel. Other than Mississauga, Brampton and Caledon are the other two major municipalities in that region and their mayors remain committed because they know the 413 is needed. But others, who hate Ford, have seen it as an opportunity to give him a hard time politically.

Mississauga is the best-served-by-superhighways municipality in the province. The QEW, 403, 427, 410, 401 and 407 all cut through the city. The residents have nothing to complain about when it comes to getting somewhere quickly. But Bonnie Crombie, the mayor, has decided that what’s good for Mississauga should not be good for anyone else and she was one of the people who voted to remove Peel support for Highway 413.

There are some fair arguments against the building of that highway, particularly the loss of animal habitat. But most are spoken and written by people who hate the premier and their arguments are primarily personal (which is not good public policy, when you get right down to it). They say Ford’s “buddies” will benefit. That sort of thing. Which is probably true. Somebody has to. But the motorists will benefit, too, as will the construction workers who will be employed to build it and the bypass. Do the critics of those projects really want to deny people work? Do they really want to see increased gridlock, which leads to an increase in greenhouse gases?

Hate Ford, the man, if you must. But leave the rest of us, and our highways and our cars, out of it.