There are two top-calibre sports car racing teams in Canada – Multimatic Motorsports of Markham and Pfaff Motorsports of Vaughan. Both adhere to the motto of the famous Roger Penske American racing team: effort equals results.

Today’s story is about Pfaff, which won the IMSA WeatherTech SportsCar Championship GTD class a year ago and announced this week that it was moving up to the IMSA GTD Pro division with pretty much the same team but an all-new driver lineup.

Porsche works drivers Matt Campbell of Australia and Mathieu Jaminet of France will drive for the full season; two-time IMSA DPi champion Felipe Nasr of Brazil will fill out the team for the four endurance races, one of which – the Rolex 24 at Daytona – will go to the post a week from this weekend.

Campbell, Jaminet and Nasr (on occasion) will be racing the No. 9 Porsche 911 GT3 R, which will once again be decked out in plaid livery.  (It gets cold in Canada; hence the plaid.)

Considered one of the strongest driver lineups in the series, Campbell and Jaminet have an extensive history of working together and Formula One/GP2 veteran Nasr boasts one of the finest resumes of any driver in the championship. All have won WeatherTech races or IMSA classics in the past and Nasr won the DPi drivers’ championship in 2019 and ’20.

Moving up to the GTD Pro class, a big step, means they are in it to win it, said Pfaff general manager Steve Bortolotti, in an interview. “We’ve got a great team and a great driver lineup and amazing support from Porsche.  Obviously, to have to compete against two-car teams that have the ability to split strategies is going to be a new challenge for us but at the same time we’re very confident in ourselves as a team.

“Our move to GTD Pro signals Pfaff Motorsports’ commitment to become an elite privateer effort, worthy of factory consideration for future opportunities. We are appreciative of Porsche’s support with factory drivers Matt, Mathieu, and Felipe. They have a proven track record of success individually, and we look forward to working with them and seeing how they gel this season.

“I don’t like to be too bullish because, in racing, anything can happen but I certainly think we have as good a shot as anybody at winning a championship.”

Bortolotti said that Pfaff decided last June or July to run the Plaid Porsche in the Pro series. As well as the challenge of moving up, they didn’t want to leave their GTD-class championship driver, Zach Robichon of Ottawa, in the lurch.  (Robichon shared the trophy with co-driver Laurens Vanthoor.)

“We have a great relationship with Zach Robichon so we wanted to give him as much notice as we could so he could make plans for his future. So while we were running and winning the GTD title, we were planning and preparing as best we could for the move up to GTD Pro.

“At the time we were winning one championship and thinking about the move up to Pro, we decided not to defend the GTD championship. We looked at the possibility of running two cars, one in GTD and the other in GTD Pro but, to be blunt, it would have been too expensive.

“The cost of equipment like trailers, pit equipment, that sort of stuff is just so high right now because racing has got a bit of a renaissance going on – cars counts are really high, so demands for the stuff is so high that we didn’t want to pay that kind of money to field a second car. It just didn’t make financial sense. We do a good job doing one thing and doing it really well so we just decided to leave it at that.”

Bortolotti was quick to point out that Porsche didn’t desert Robichon and arranged a ride for him with Wright Motorsports as the third driver in the four endurance races scheduled in the GTD class. “Porsche is keen to keep him in the fold; they’d rather race with him than against him. But he has a full-time job – he runs his own business – so he’s busy and to race in a higher category would mean a greater time commitment.”

Auto racing at the upper level is enormously expensive. Motul, for instance, will return as a major partner. The French lubricants manufacturer supplies its 300V motor oil, RBF 700 brake fluid, and other lubricants. Pfaff will continue to offer Motul products over the counter at select dealerships. The insurance company Hagerty also returns to the Plaid Porsche, as will Orlando Corp. and the Pfaff Porsche and Porsche Markham dealerships. 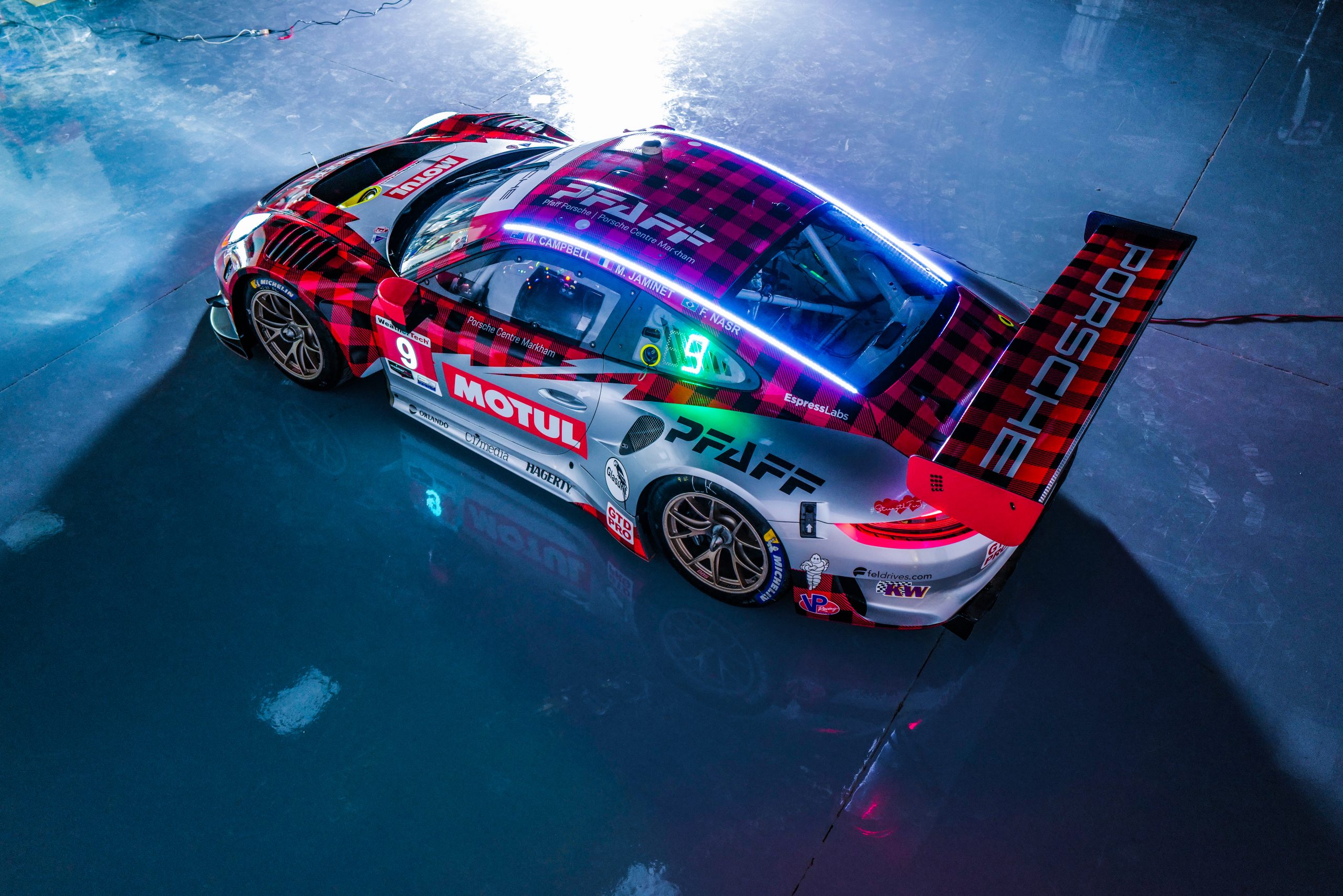 Bortolotti has his fingers crossed that IMSA will be able to run a race in Canada this season after being kept out the last two years because of the COVID-19 pandemic. There will be a big problem, if we can’t (race),” he said.

“Sponsorship often depends on where the races are held,” he said. “Nobody will ask for their money back but it might be harder to get in the future. And that’s what we’re concerned about. In 2020, everybody was understanding, and they were still understanding in 2021. Now, with the border being open – and the health and safety of Canadians is very important to all of us – but we really hope that we’ll be able to run a race at Canadian Tire Motorsport Park.”

The owner is excited about the upcoming season. Said Chris Pfaff, President & CEO: “2022 will be just our third full season in the IMSA WeatherTech SportsCar Championship, and in that short time, I’m incredibly proud of what the whole Pfaff Motorsports team has accomplished, winning four races and the GTD championship in 2021. We’re excited to be taking the next big step, and are grateful for the confidence that Porsche has shown in us. With an amazing driver lineup and a great team behind them, all of the ingredients are in place for a successful season.”

All three drivers expressed their enthusiasm for their ’22 rides. Driver Campbell, for instance, said that the team will be a force to be reckoned with in 2022. “Having driven with the team previously, it will be an easy step already knowing the majority of them, which has a great group of characters. Mathieu (Jaminet) and I have been driving together for two years now in most championships we compete in – we like the same things in the car and have the same feedback, so I expect our partnership to only grow further with the team.”

Added Nasr: “The prototypes have a special place in my heart, having won two IMSA championships, (but) as a racer, I’m always up for a new challenge.”

The Pfaff team is in Daytona now (the transporter drove through that East Coast storm that hit us early this week; everybody else flew down Wednesday night). Now they’re hard at work preparing for the WeatherTech season, which starts at the Roar before the 24 preseason test at Daytona International Speedway this weekend.

Round one, which is also the biggest race of the season, gets under way a week later when the Rolex 24 gets the green flag on Sat., Jan. 29.