I used to have a boss who freely admitted he knew nothing about cars. When people asked him what kind of car he drove, he would say, “a black one.”

Sometimes, in these Days of Covid, I feel the same way. There is not a lot to write about when it comes to new cars, because there aren’t many. And the automobile industry is twisting itself into a pretzel in its never-ending quest to create/provide content for people like me to write about.

The automakers, with exceptions, are just like millions of people. This coronavirus has punched them in the gut. They are not selling cars in the numbers they did right up till last March. Then, sales fell off a cliff. Yes, some people were buying but many others, when given the choice of purchasing a new car, or eating, have gone with the food.

I am a very black-and-white guy. I don’t see the grey. I like to get into a car and take it for a ride and then tell the people who read my stuff all about whatever-it-is I’m driving and whether or not I think it’s good or not-so-good. Where I run into trouble is when we get into the abstract.

Twice this week I covered debuts of cars that aren’t even finished. One, a Volkswagen EV, is close to being done – there might be a tweak here or there – and will go on sale in the middle of next summer. But there was no test drive because the car is not available.

The other, the Infiniti QX60 Monograph – a monograph is a detailed study of a single subject; in this case, the study of the QX60’s exterior design and all the possibilities of a future model – is a prototype of how Infiniti plans to transform the future QX60. It’s still on the drawing board (although an exterior demo model went on display at the 2020 Beijing International Automotive Exhibition, which opened Friday. What I – and other journalists – experienced on Wednesday and Thursday this week (yup, two nights) was a preview of a design of the next-generation, three-row, SUV (the production version will likely be unveiled in 2021.)

So, yes: we saw a preview of a design.

Now, I don’t want to appear to be too flippant about this. Infiniti, Nissan’s luxury division, is a class organization. I have yet to drive a bad Infiniti. The cars are attractive, opulent and futuristic. The people handling communications are hard-working, energetic and resourceful.  And the Nissan global chief of design, Alfonso Albaisa, is one of the automotive world’s most delightful characters. At the conclusion of a roundtable with Canadian writers, for instance, he mentioned that his daughter is studying theatre in British Columbia and loves Canada. He asked us to look after her for him.

In our session with him, however, Albaisa launched into his philosophy of the evolution of design and it was pretty much Greek to me. To avoid any misunderstandings, then, here is pretty much what he said about the QX60 Monograph at its design preview in Tokyo Thursday night:

“In crafting the Monograph, we wanted to transform the nameplate from a sculptural and architectural point of view. We raised the visual centre of gravity, giving it a strong, straight, shoulder line that carries through to the hood where the higher, more prominent grille and the longer-looking cabin delivers a sense of muscularity and a commanding presence.

“The current QX60 is popular with families. It is known for offering spacious packaging and comfortable three-row seating. We worked very hard to maintain those proportions while transforming the shape to a more aerodynamic, muscular silhouette. Viewed from the side, the monograph shows off its long horizontal hood, defined fenders, long wheelbase, paired with the gentle rake of an A-pillar and tapered, teardrop-like glass housing that result in a long, sweeping, sophisticated profile.”

“At the rear, the wide body and track paired with the horizontal window-line gives QX60 Monograph poise and stance. The stunning paint on this (car) has this highly reflective nature that mimics the qualities of liquid metal, allowing the surfaces of the body to capture the shadows and light of the environment around it, creating a sense of dynamism.

“When you get closer (to the body), you see there are elements that are playing against each other in a sense of harmony. You can also see the intricate folds of traditional Japanese origami that inspired the inner mesh of the signature, double-arch, Infiniti grille. The result is a two-dimensional surface that appears three-dimensional. Whether coming or going, the lighting on the QX60 Monograph draws you in. The overall effect of the design is a more planted, sophisticated SUV that can take on the beautiful chaos of family life in the most elegant way.”

And you thought you were just going in to buy a car. A black one.

By Norris McDonald / Special to Wheels 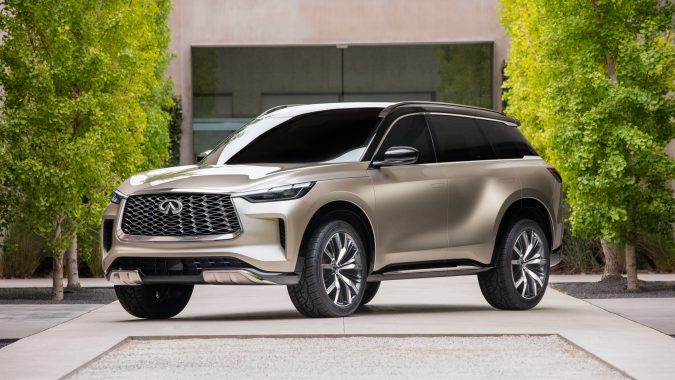 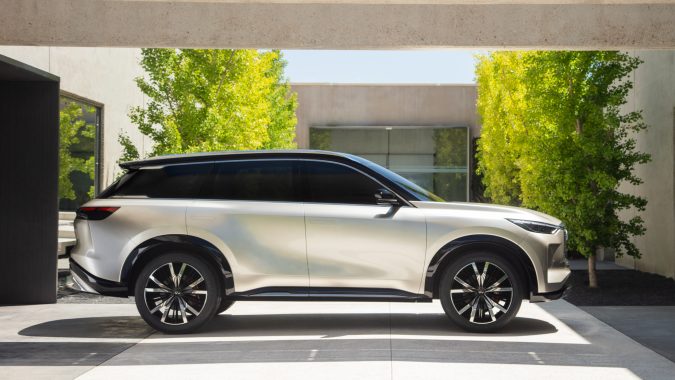 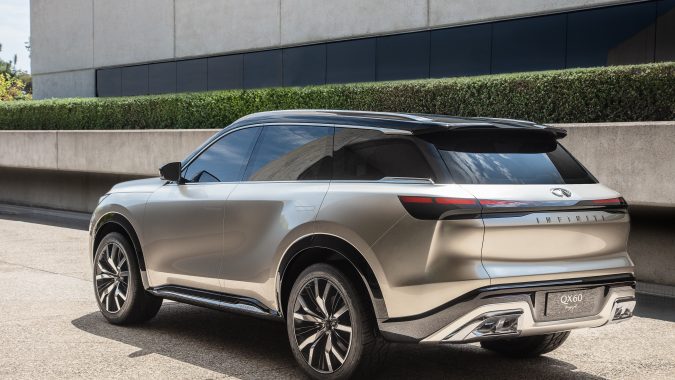