Racing Roundup: Ageism? Honda might have Dodged a Bullet

Both Honda and Mario Andretti have denied a published report that the legendary driver’s contract to drive the two-seat Indy car before NTT IndyCar Series races would not be renewed.

This allegedly has something to do with Mario turning 81 in 2021 and the cost of insurance.

I remain sceptical, however.

The writer who broke the story has an excellent record for accuracy. Somebody told him something. He didn’t dream it up. I’ve been around. This happens all the time: a decision is made but gets leaked. The shit hits the fan. The word comes down from on high – DENY, DENY, DENY.

(Of course, this could have been a reverse sting, too. Somebody in the Andretti camp hears something and they leak it. The shit hits the fan. Mario Andretti will now get to drive that two-seater forever. Mission accomplished.)

You heard most of the above here first.

Okay, I’ll ‘fess up. I’ve been avoiding talking about that F1 race Sunday and that’s because it was so boring I dozed off.

I’m serious. Fell fast asleep. I know people who went outside for runs. And bike rides. Not good for the sport, that’s for sure.

In any event, Lewis Hamilton (who else?) won the race at Imola, Italy, with his Mercedes teammate Valtteri Bottas second and Daniel Ricciardo third for Renault.  The other guy who usually finishes on the podium, Max Verstappen, had a flat tire and his Red Bull Racing-Honda wound up in a sand trap. His teammate, Alex Albon, spun out late in the race, meaning Red Bull didn’t score a point, which doesn’t happen very often.

The victory gave Mercedes its seventh consecutive Constructors Championship, beating the six wracked up by Ferrari in the late 1900s, early 2000s. Team principal Toto Wolff told the Sky TV interviewers after the race that he was rethinking his role at Mercedes and would soon start grooming a successor. This then led to Hamilton saying he didn’t know if he would remain with Mercedes after this season. 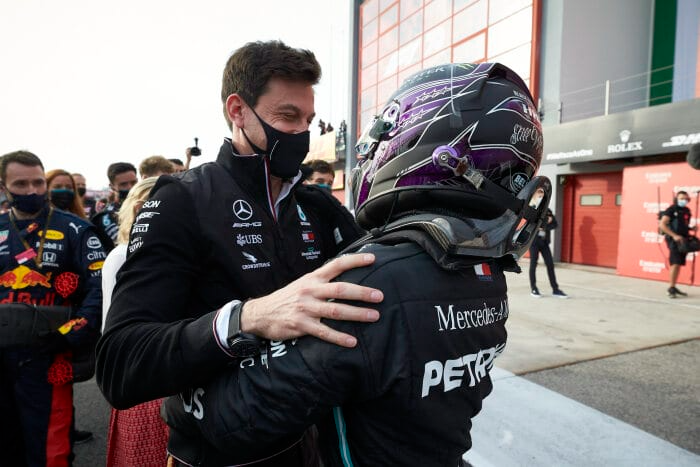 Three things: Like baseball’s New York Yankees, the Mercedes F1 team is a powerhouse. Money and expertise usually win out in the end. Two, Wolff needs a challenge. It’s too easy now. He’ll want to cash in his investment with Mercedes, either by selling his shares back to the automaker or to the new person who will replace him and then take that money to buy shares in another company he wants to rescue. Hell, he might even buy a team – Haas, for instance. And three, Hamilton ain’t goin’ nowhere. He’s about to win his seventh world title and he’ll have won six of them with Mercedes. He wants an eighth, to set the all-time record. Do you think he’s going to change anything?

For a complete story on the F1 race, please click here

McLaren CEO Zak Brown sure has the gift of the gab. McLaren, which laid off 1,200 people earlier this year (yes, 1,200) and borrowed 150 million pounds from the Bank of Bahrain (that’s approx. $260 million Canadian), has officially put its McLaren Technology Centre up for sale. Asking price: 200 million pounds. Then the team will pay rent to stay there. Now, listen to this. Says Zak: “We’re going to do a traditional sale and lease back. I think the majority of companies in this word don’t actually own the real estate they are tenants of. We’ve got a lot of cash tied up in that building and that’s not a very productive use of funds when you’re looking to invest in your business.” Translation: “Invest in your business” means spending your brains out to stay in business. That is like me saying, “I am going to invest in two hamburgers at Harvey’s so I don’t starve to death.” McLaren is treading water. Desperately.

Our Nicholas Latifi finished 11th – and just out of the points – for the third time this season. There was much excitement in the Williams garage in the final laps, though, as Latifi closed right in on Antonio Giovinazzi but just missed out on his first-ever points, and Williams’ first of the year, by 0.7 second. But he saw something positive to talk about afterward.

“It was a strong race for me today, especially off the back of a really tough weekend in Portugal,” he said. “We ran really long in the first stint, aiming to have a tire life advantage at the end. It seemed that the medium tire was not a great race tire in terms of how much grip it was giving, and I didn’t really feel any quicker on it. I hoped to capitalize on the second stint but my restart after the Safety Car was poor. Antonio (Giovinazzi) made a mistake in the chicane on the last lap which gave me DRS. We seemed to have a pretty decent straight-line speed advantage compared to the Alfa Romeos this weekend, so with one more lap maybe I could have got past him for 10th. It’s a bit disappointing, but the overall pace today was encouraging.”

The other Canadian, Lance Stroll, had another awful outing and finished 13th. “It was a really difficult day out there,” he said. “The contact with Esteban (Ocon) on the first lap really ruined my race and I had significant damage to the front wing. It’s a shame because I was able to make up a couple of places at the start. After the contact, we came in at the end of the first lap and switched to the hard tire, but we knew that without a really disrupted race, it was going to be tough to make up many places because it’s so hard to overtake here. At the final pit stop, I had really cold brakes and that meant I overshot the pit box (hitting a crew member). I’m really glad to hear that my mechanic is okay – that’s the most important thing.”

Speaking of awful, for the second straight week, we saw a world-class racing driver spin – and in the case Sunday, crash – while the field was following a pace car during a caution period. George Russell was the culprit this weekend and you really wonder how who these things happen.

F1 will now try to carry on to finish the season. The series and most of the teams are located in England, where a no-exceptions lockdown has been ordered for the month of November. International athletes, however, have been given a break previously so far as quarantines are concerned and everybody has their fingers crossed that this will continue through the month. But this is uncharted territory and rules and regulations can change in an instant.

However, if all goes well, the series will reconvene in two weeks in Istanbul, Turkey, for a Grand Prix there. They just had a severe  earthquake in that country. Normally, people would express concern for victims and for the race but this is 2020. What would you expect?

If all those F1 fans who went out for walks and bike rides Sunday morning, rather than trying to stay awake during the Grand Prix were looking for some exciting racing, I really hope they watched the NASCAR Cup race from Martinsville, Va., later in the day.

Kevin Harvick, who won nine of 36 “regular season” races – a quarter of all races – was eliminated from the championship race next Sunday in Phoenix when he failed on the Martinsville half-mile to finish with enough points to move on.

Chase Elliott, the son of Bill Elliott (Awesome Bill from Dawsonville) who won his first NASCAR race, period, in the trucks at Canadian Tire Motorsport Park in 2013, raced his way into the championship round, as did Brad Keselowski and Denny Hamlin. They will be joined by Joey Logano, who had clinched earlier.

For a complete story of the Cup race, please click here.

In other NASCAR touring series action, Harrison Burton won his second straight Xfinity Series race, also at Martinsville. The Xfinity championship will now be settled next Saturday at Phoenix between Justin Allgaier, Austin Cindric, Justin Haley and Chase Briscoe. And in the NASCAR trucks, Grant Enfinger won the Martinsville race and, in so doing, punched his ticket to race against Brett Moffitt, Sheldon Creed and rookie Zane Smith next week at Phoenix. 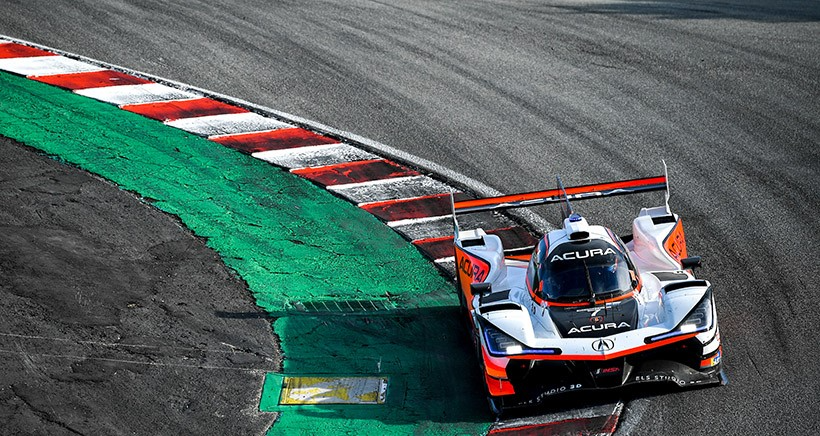 With just a lap to go in the IMSA WeatherTech SportsCar Championship race at the Laguna Seca race track in California Sunday, Acura Team Penske driver Dane Cameron (co-driver, Juan Pablo Montoya), pulled over and let teammate Ricky Taylor past. Taylor went on to win the Hyundai Monterey Sports Car Championship and, with teammate Helio Castroneves, took the lead in the points standings going into the last race of the year in two weeks in the 12 Hours of Sebring, Fla. The Action Express Racing-Whelen Engineering Cadillac DPi V.R co-driven by Felipe Nasr and Pipo Derani finished third. In the GT Le Mans class, Porsche with drivers Laurens Vanthoor and Earl Bamber aboard, claimed victory but Jordan Taylor and Antonio Garcia won the championship by finishing second. In the GT Daytona class, the Meyer Shank Racing with Curb-Agajanian Acura NSX GT3 driven by Matt McMurry and Mario Farnbacher won the race and reclaimed the championship lead going into Sebring.

Felix Rosenqvist announced this week that he would leave Chip Ganassi Racing for a seat at Arrow McLaren SP, replacing Oliver Askew in 2021. I still say that if Sergio Petrez doesn’t get something decent to drive in F1 next year (Red Bull, beside Max), he could still wind up in IndyCar. A third car at McLaren would not be out of the question, considering Perez would have the cash to finance it himself. That seat at Ganassi’s, meantime, was snapped up by Alex Palou. No sponsorship announcement for either Rosenqvist or Palou but somebody somewhere is supplying the money.  And the two Haas drivers, Grosjean and Magnussen, say they’ve been talking to IndyCar teams and have been told that if they have money they will have a seat.

The fourth round of the Canadian Superbike Championships, sponsored by the International Brotherhood of Electrical Workers, which was held at Canadian Tire Motorsport Park in August, will be shown on TSN Tuesday and Wednesday this week. You can catch the Pro Superbike Feature at 1:30 p.m. Tuesday on TSN1 and TSN3 and again on Wednesday at 1 p.m. on TSN3 and TSN4.

Although she would have preferred better results, Richmond Hill’s Megan Gilkes started the final races (A-Mains, features, whatever-you-want-to-call-them) of both the U.K. Formula Ford Festival and the Walter Hayes Trophy races that were run in England the last two weekends. She’s got tons of talent and I know she wants to turn heads in Europe but I think it’s time for her to consider the Road to Indy program going forward. A Canadian woman in the Indianapolis 500 in a few years? I could go for that.