Racing Roundup: F1, like NASCAR, should slow down the cars

NASCAR is planning to cut speeds by as much as 10 mph at their restrictor-plate speedways, Daytona and Talladega. They are worried the cars are going too fast. Maybe Formula One should take a page out of the same book.

F1 drivers – particularly the fast guys at the front of the pack, like Lewis Hamilton, Valtteri Bottas and Max Verstappen – had qualifying laps deleted at the Red Bull Ring this weekend, as well as at recent races in Portugal and Italy. (Laps are deleted when all four wheels on a car go outside the track boundary line. Drivers sometimes screw up and this happens; other times, they actually plan to run a lap with two of their wheels over the line at certain corners or parts of the track to give themselves an advantage.)

That this is being allowed at all is ridiculous. A boundary is a boundary, not something that can be moved at will. The Armco at Monaco is a boundary. Hit that and the car is damaged – as it should be. Go all four wheels past the boundary in Austria and the stewards say, “Naughty fellow,” and delete the time.

So why not slow down the cars? I know some people might think this to be almost sacrilegious but if NASCAR fans can’t tell the difference between 190 mph and 200 mph, or 180 and 190, an F1 fan won’t be able to tell the difference either and it might help the cars stay within the boundaries  of the track.

Okay, Max and Red Bull moved further into the lead of the 2021 FIA F1 World Championship by crushing the field in Sunday’s Styrian Grand Prix. Max led from start to finish and it marked the first time in the turbo-hybrid era (2013) that Mercedes lost four consecutive races. Whatever Mercedes did, Red Bull covered it. Hamilton was second, Bottas finished third (barely) and Sergio Perez in the second Red Bull was fourth. Lando Norris wound up fifth for McLaren. Both Hamilton and Norris referred to their runs as “lonely races,” which pretty much says it all about this race. For a full report, please click here

Lance Stroll of Montreal likes to play hockey at home in Switzerland. He’s also a huge fan of the Montreal Canadiens. Before the 2019 Canadian Grand Prix, Stroll and several Canadiens worked out at the Bell Centre to publicize the big race. Now, Stroll has got a Canadiens logo glued onto his green Aston Martin helmet (above). “I’m very happy that for the first time in my life I will be watching the Canadiens in the Stanley Cup finals,” he said on Twitter. “Want to wish the best of luck to all the boys who have done an incredible job all playoffs. Can’t wait to tune into the finals.”

Although our Nicholas Latifi didn’t make it out of Q1 during qualifying on Saturday, he just missed by the skin of his teeth. In fact, he was flying. Broadcaster, and retired F1 driver, Martin Brundle, said: “Latifi just turned the best lap of his career, so far.” Said Latifi: “It’s frustrating to miss out on Q2 by such a small margin, but my second lap was a very competitive one, so I was happy with that. During my final run I lost some time in the last sector coming up behind traffic; that can block your line of sight going into such high-speed corners, so I got a bit out of shape there. Overall, a frustrating result.”

While we continue to hold out hope about a Canadian Grand Prix in 2022 (don’t count your chickens, folks), a full crowd will be allowed at Silverstone for the British GP this summer. There are still concerns in the U.K. over Covid-19, though, and if you want to get into the Grand Prix you will need proof of two vaccine shots and have to pass a test at the gate. As well (as is the case here), the public health director will have the ultimate say depending on the coronavirus conditions at the time.

The betting in the paddock, my friends tell me, is that George Russell will be with Mercedes next season, replacing Valtteri Bottas. Then, whenever Hamilton retires, Russell will be ready to take over as team leader. They say. And a non-driver hiring of note is top aerodynamicist Dan Fallows, who will be leaving Red Bull Racing to work for Aston Martin F1.

More from the guys in the paddock. The Autodrom Igora Drive, north of the city of Saint Petersburg, will host the Russian Grand Prix beginning in 2023. This is no great surprise. St Petersburg is Vladimir Putin’s home city. He was born there, studied at the State University in the city and after graduating in 1975 joined the KGB for 16 years. He quit in 1991 to begin a political career in Saint Petersburg. The city is probably the most attractive in Russia and a Grand Prix puts a city on the international map in a way that no event other than an Olympics can do.

I turned on the NASCAR races from Pocono Raceway this weekend and couldn’t believe what I saw. They had a crowd there that was reminiscent of Pocono turnouts in the late 1990s, early 2000s. A packed grandstand and an infield and parking lot full of motorhomes made for a grand crowd. And they saw some wonderful racing. On Saturday, Kyle Larson was about to win yet another NASACAR Cup race when he cut down a tire going into the third turn and hit the wall. Alex Bowman snuck past to win while Larson wound up ninth. In the trucks race Saturday, John Hunter Nemechek was the winner. In the Xfinity Series race Sunday, Austin Cindric won but if it had gone another lap, Ty Dillon would have caught him, it was that close. And in the second Cup race of the weekend, Kyle Busch ran the last 115 laps without a clutch but held on for the win.

At Watkins Glen and the Sahlen’s Six Hours of the Glen IMSA race, writer Jeff Olson reports that getting a lift to the pits in a safety car isn’t usually a good sign for a racecar driver. In Harry Tincknell’s case on Sunday, it was pure joy because he won the Sahlen’s Six Hours of The Glen at Watkins Glen International with a car so low on fuel that it ran dry on the cool-down lap, leaving Tincknell to wait for a ride to victory lane to greet co-drivers Oliver Jarvis and Jonathan Bomarito. For details, please click here  Mazda Motorsports repeats victory in Sahlen’s Six Hours of The Glen | Motor-sports | buffalonews.com  In the GT Le Mans class, Corvette finished first. For details, please click here CORVETTE RACING AT THE GLEN: Hard-Fought Win for Garcia, Taylor | SpeedwayMedia.com 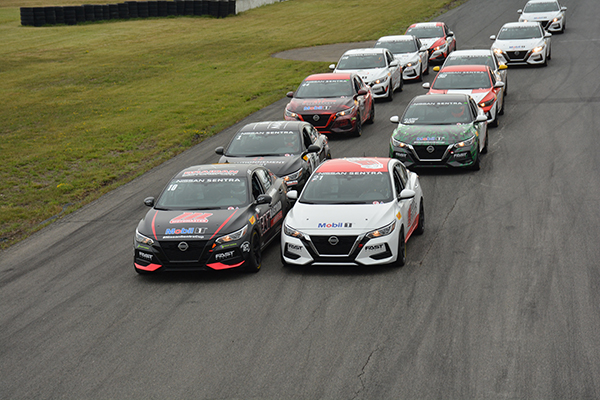 This from Nissan Communications: The Nissan Sentra Cup officially kicked off at the weekend, with 24 competitors hitting the track at Shannonville Motorsports Park near Belleville (above). This inaugural event was highly symbolic, as it was not only the very first race in the history of the new Canadian motorsport series, but also the racing debut of the Nissan Sentra. The Sentras clocked faster lap times than in pre-season testing and were driven by talented drivers from Ontario, Québec and British Columbia. In the end, Ontario’s Gavin Sanders won both races. For details, please clock here   Nissan Sentra Cup celebrates its first winners of 2021! (nissannews.com)

The long-established Canadian Touring Car Championship had to cancel its races at Shannonville Motorsport Park on the weekend because of a lack of cars. There are several reasons for this state of affairs. Many non-professional or semi-professional race drivers re notoriously slow getting ready for the season to start. Plus, in this case, there is now a rival series up and running, the FEL Motorsports Sportscar Series, and a number of cars are running in both championships (stock cars and sprint cars do this all the time, by the way). Last weekend at CTMP, the FEL championship held its first race and, 1, only 14 cars showed up for the sports car race and 2, it was a bit of a crashfest. So, some cars planning to run at Shannonville with CTCC weren’t repaired in time. And a couple of big-league teams, which had talked up the new championship as being the best thing to happen to Canadian racing in years, didn’t bother to show up at CTMP. CTCC will now try to open its season at Trois-Rivieres in August.

Tony Stewart made some new fans Saturday night at Eldora Speedway in Ohio by winning the second straight Superstar Racing Experience race and Paul Tracy made a bunch of new enemies after tangling with Bobby Labonte. Local dirt-track start Kody Swanson finished second and Helio Castroneves was third. The most talked-about driver was Tracy, who led the first 25 laps of the 50-lap feature by using the bumper and fenders of his race car to protect the lead.

“I know I’m going to have some Bobby Labonte fans after me because he’s super pissed at me, and rightly so,” Tracy said. “He got by me on the restart. I was running on top and I decided I was going to cut to the bottom like Tony did and I just got it all wrong. He turned in a little earlier than I thought he would, and I tagged him and that was it. So that was my bad and I went over to apologize to him, but he was having none of it.

“The SRX cars put on a great show. I felt really good on this track. This is a wonderful track that Tony has, and I couldn’t be happier with how we ran overall tonight. We picked up a lot of points and hopefully made some new fans. I’m sure we made some enemies because those Bobby Labonte fans probably hate me.”