Racing Roundup: Farewell to ‘Lole,’ Buschbasher does it again

The boo-birds are really on Tracy, sprint cars roll in Ontario and all the rest of the news

One of the greats of Formula One, Carlos Reutemann, died five days ago. Anything I could say about him would be anti-climactic compared to an F1 expert like Peter Windsor. I can’t take photographs like my friend Paul Madder, either. Paul shot photos in Canada and Europe back in the day and sent me this beautiful portrait of “Lole.” To hear Windsor’s memories of Reutemann, please click here.  youtu.be/0Rutrx5yLjA

Kyle Busch said goodbye – he said – to the NASCAR Xfinity Series Saturday at Atlanta Motor Speedway by doing what only he can do so well: assault his teammate in order to win and then say how badly he felt about the whole business afterward.

Do you know what I’d like to see sometime when this sort of thing happens? Take the win but give the victim – in this case Daniel Hemrick – the first-place prize money.

Like many people, I’ve long resented watching the big-league guys drop down a class and take home all the loot. It’s like Maple Leaf hockey players without anything to do on a Tuesday night going over to the Ricoh and taking the place of a couple of Marlies. People wouldn’t hear of it, of course, but that’s the difference between auto racing and real sports.

NASCAR, to its credit, tried to stop this happening a few years ago by making drivers pick a series/class in which to score points. Most of the Buschwhackers (so named when the second tier was sponsored by Busch beer) took the hint and stepped back from picking on the young up-and-comers but one or two didn’t and you can guess who they are.

On Saturday – the best race of the weekend, by the way; IndyCar and F1 were on off-weeks and the Cup race was so-so) – Hemrick led Busch the whole race, pit stops and everything, until a final restart with six laps to go. Because of NASCAR’s convoluted restart rules in which drivers (other than the leader) get to pick where they want to be when the green flag flies, Busch lined up behind Hemrick in third position even though he’d been second when the yellow caution flag came out.

Anyway, the green flew, Busch hit Hemrick in the rear, turning him around and into the wall, and went on to win. Afterward, Busche said this: “Obviously I meant to push him; I meant to push him forward and straight. It turned him sideways a little bit.”

Busch said all this with a straight face. Of course, he’s had plenty of practice.

Busch won all five Xfinity races he entered this year and ended his lower-tier career with 102 victories. He said he’s finished with the Xfinity. We’ll see. For a complete story, please click here. Kyle Busch wins at Atlanta, in maybe his last Xfinity race | Miami Herald

The Superstars Racing Series held its fifth of six series races Saturday night in front of a sellout crowd at Slinger Speedway in Wisconsin and many others watching on the CBS Television Network, which has been covering the series live.  NTT INDYCAR Series veteran Marco Andretti won the Camping World-sponsored race. According to series PR man Laz Denes, it was his first victory in a race car with fenders and a roof.

The third-generation racer, whose grandfather is Mario Andretti and father is Michael Andretti, held off local all-star Luke Fenhaus, a 17-year-old high school student, to take the win at the quarter-mile, high-banked asphalt oval 35 miles northwest of Milwaukee. Tony Stewart was third.

“Honestly, I know it’s not a popular win, but I tried to be as clean as possible,” said Andretti, a 16-year veteran of the NTT INDYCAR Series. “I’m so proud of him (Fenhaus). I’m trying to learn from him, to be honest with you. Just delighted to be able to do it without touching him. I know it’s not a popular win, but us old guys have to get it when we can. He’s young, he’s got a lot of time ahead of him.”

Andretti beat Fenhaus to the checkered flag by .194 of second in a green-white-checkered finish. And he let it be known he’s in negotiations to drive a car next season in the NASCAR Xfinity Series.

Our Paul Tracy was on the receiving end of catcalls and boos from folks in the stands. While just about everybody was bashing and crashing their way around the little bullring, Tracy was booed just about every time he got aggressive. In the feature, young woman NASCAR racer Hailie Deegan turned him around and he was hit by three or four other cars, putting him out of the contest.

The Superstars will finish their first season next Saturday night at the Nashville Fairgrounds Speedway. CBS at 8 p.m. 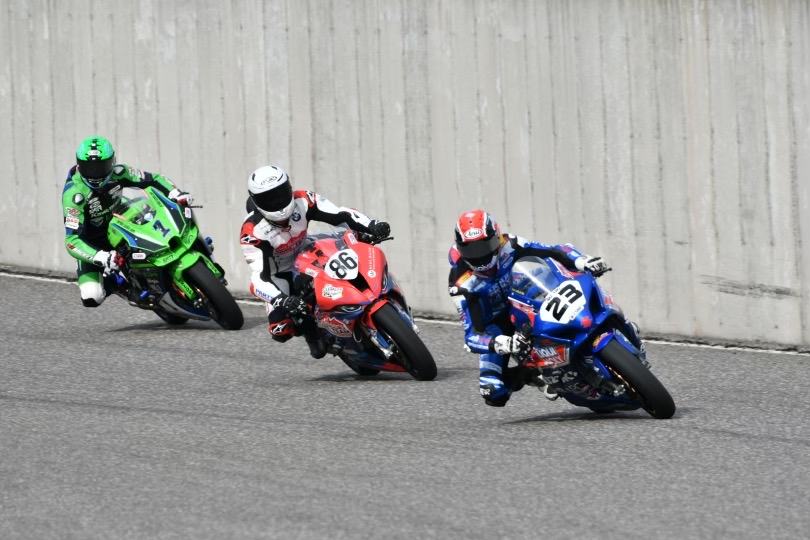 The Pinty’s Knights of Thunder 360 Sprint Car Series and the Action Sprint Tour got their 2021 seasons going, finally, at Thorold’s Merrittville Speedway Saturday night and Jordan Poirier was the winner of the Knights of Thunder race. Jim Huppenen, Mac DeMan, Josh Hansen and Cory Turner were the top five. A 17-year-old, Jacob Dykstra, won the Action Sprint Tour season opener, with Luke Smith, Nick Sheridan, Jesse Costa and Steven Beckett chasing him to the checkers. James Michael Friesen won the Sportsman feature, Bob Murray was first in Hoosier stocks. A little more than 700 fans, a quarter of capacity, took in the action.

FEL Motorsports, promoter of the Sports Car Championship Canada presented by Michelin and the Emzone Radical Cup Canada presented by Michelin, released the payoff for the first round of races held at Canadian Tire Motorsport Park last month in advance of the second round of races at CTMP next weekend. In addition to barrels of racing fuel (expensive) and car-care packages (not so much), the cash payoff was as follows:

Now, I have never understood club road racing. Tell you why. To join a professional racing series such as the Sports Car Championship, it costs you (about) $2,500. Then, if you enter an event weekend, it costs you (about) another $2,500. And some clubs have a rule that you have to purchase tires from the promoter, which can run you around $5,000/season. And, yes, some money comes back. But like it is in F1, the same three or four guys usually win it all, or most of it.

When I was racing, the promoters (tracks) would pay me (and all the other racers) just to show up. That was called tow money. Then you raced for money (the payoff). If you didn’t qualify for the feature, you got the tow money. Last place in the feature (24 cars start) would generally pay the tow money plus $25. If I went out to Michigan, say, the tow money would be $600. Last place would pay $625. (First place might run as high as $5,000. Yes, that’s thousand.) You could race at Grand Rapids Saturday night and Kalamazoo Sunday afternoon and collect $1,200 for starters and race for more. To me, that’s professional racing.

COVID-19 continues to rear its ugly head in some places in Canada and one particularly hard-hit area is the Six Nations of the Grand River community, forcing officials at Ohsweken Speedway to cancel everything there till 2022. Track owner Glenn Styres said, however, that track improvements are continuing and a new VIP tower in Turn 3, new walls along the front and back stretches, improved parking areas and one or two other things are in store. And Styres said one event he’s particularly looking forward to is the NASCAR Pinty’s Series dirt track debut that has had to be cancelled twice because of the pandemic. And d’ya think Glenn himself – a sprint car champion of note – might be thinking of making his stock-car racing debut when the Pinty’s tour hauls in? We’ll have to wait and see but I wouldn’t be surprised.

From Professional Motorsports Productions: Teenage sensation Alex Dumas continued his winning ways at Calabogie Motorsports Park on Sunday, winning race two of the Pro Superbike doubleheader to sweep round one of the Canadian Superbike Championship. Though the top-five finishers were identical to race one earlier in the day, the results were under much different circumstances as Dumas found himself trailing pole-sitter Ben Young for most of the early portion amidst a seven-rider battle.
However, the 18-year-old managed to find a little extra pace by the midway point, moving his Liqui Moly Suzuki GSX-R1000 into the lead and relegating Young to second once again. Young was able to maintain the gap aboard his Van Dolder’s Home Team BMW S1000RR, and even seemed poised for a last-lap manoeuvre, but it wasn’t in the cards. “We had two strong starts and now two wins, which is pretty amazing,” Dumas said. “Ben pushed me really hard in that second race, but everything worked perfectly. I really love racing Superbikes.”

Formula One will hold its first sprint race this coming weekend at Silverstone. Some drivers aren’t too fussy about the idea, others like it; Lewis Hamilton predicts it will be a “train.” Regular qualifying will be held Friday, setting the field for the sprint race. The sprint race (one third the distancer of a regular GP) will be held on Saturday, instead of qualifying, to set the field for the race. The winner of the sprint race will start from pole in the Grand Prix rather than the fastest man in qualifying. Check your TV listings for times of the Friday qualifying and Saturday sprint as well as the regular GP. TSN will carry everything but the times might differ.

Multimatic motorsports has got a new website. It is a dandy. Take a look by clicking here.