Tagliani wins Pinty’s, NASCAR disgrace at Indy and all the news.

I spent the weekend in Trois-Rivieres, Que., and attended the famous Grand Prix where Gilles Villeneuve was discovered by James Hunt back in 1976 and the rest is history.

And everything that is both right and wrong with Canadian motorsport was on display Friday through Sunday at what is known as GP3R. What is right? The NASCAR Pinty’s Series and the Nissan Sentra Cup. The others on display this weekend? We’ll get to those in a moment.

The Pinty’s Series – the winner is the National Champion – has attracted some of the finest racing drivers in the country. The teams are professional, the “show” is presented with the efficiency and drama that only NASCAR can produce, and the races, be they on oval speedways or road-race circuits, are always exciting.

The one this weekend, which was won by Alex Tagliani, was of the road-course variety and was a nail-biter from start-to-finish.

The Nissan Sentra Cup, which started life as the Nissan Micra Cup, has gone a little “uptown” with the cars a bit more powerful, the racing a little more aggressive and the cost of participating a lot higher. But this latest in what has been a gaggle of one-make series (the Player’s Challenge Series, the Honda-Michelin, the Turbo Porsche are some of the others) is well managed and promoted and more “professional” – in many ways – than its predecessors.

What is wrong? Two of the national series on display this weekend were both operating at what you could call half-strength. The Canadian Touring Car Championship that – at best – used to attracted anywhere from 20 to 25 cars a race, on average, has been split in two. Now, a “new” Sports Car Championship holds races that have nine or ten starters who used to race in the CTCC. (The business writers would call this an attempted hostile takeover.) The CTCC was at GP3R this weekend, as it has been for about 15 years, and there were eight cars on track.

This makes absolutely no sense and will wind up ruining this class of the sport. I can’t believe the bitterness. Drivers, some of whom race in both series, say one thing and then do another. Manufacturers are taking sides. The world-wide sanctioning body for touring cars has sent threatening letters to the company running the “new” series because of what it calls the illegal use of licences and trademarks. One well-known Canadian racing company sent out a press release praising the “new” series and pledging support and hasn’t entered a single race. There were ways to handle this before all hell broke loose, but somebody decided to start shooting first before discussing a possible compromise, which hasn’t happened. Nuts.

Then we have the situation with Formula 1600. There must be between 40 and 50 Formula 1600 cars in eastern Canada (maybe more) and 16 showed up at Trois-Rivieres. Why? Because, with one or two exceptions, Ontario teams and drivers won’t race in Quebec and the Quebec teams and drivers won’t race in Ontario. Isn’t that just wonderful? Silly me. I thought we were over that. I’ll tell you, we have enough problems in this country today without revisiting Hugh McLennan’s Canada of the 1950s and early ‘60s. And then people say, “Gee, how come GP3R is trying to bring in the SCCA Formula 4 Series?” I’ll give those people one guess as to why.

Maybe I’m wrong, but there are people in charge of racing in Canada – all racing in Canada – and I would think it was their job to, a) have their ear to the ground to make sure this sort of thing doesn’t happen in the first place and, b) if it does, fix it. I don’t think either of those things are happening. This is nothing personal. I am good friends of people on all sides. I see my job, though, as giving everybody a nudge before this turns into a disaster. 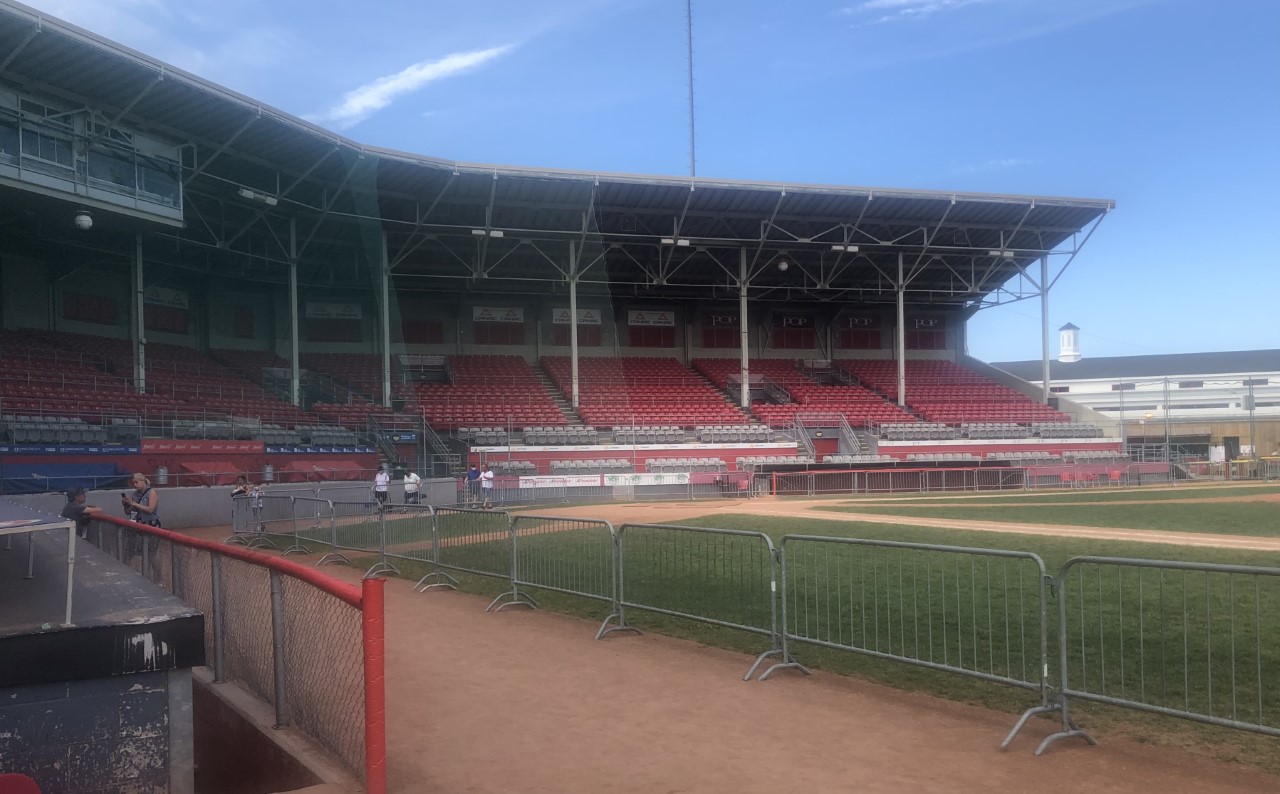 Now, the Grand Prix de Trois-Rivieres is a wonderful weekend. Everybody should come. In fact, I urge you to consider coming next summer. It’s a great little town (no, you don’t have to speak French; this is a tourist town so the desk clerks in the hotels are bilingual, as are the wait staffs in the restaurants. And all the U.S. networks plus the CBC, CTV and Global are on the local cable system). And the races take place at a marvelous midtown sports complex that features harness racing, baseball (see photo of the stadium, above), an Olympic-size outdoor pool, an arena and a race course for the Grand Prix,

Let’s hope the disagreements that threaten to rip the sport apart in Canada don’t do serious harm to this marvelous attraction and venue. Of course, GP3R will always have NASCAR and, if need be, more SCCA classes than Formula 4. And how embarrassing would that be for Canadian racing?

A sad note: Rob Morton, one of the founders of Inside Track Motorsport News magazine and website, died suddenly on Aug. 9 of complications after suffering a stroke. All competitors in the headline Pinty’s Series race at GP3R Sunday carried a decal on their cars saying, “One Last Ride, Just for You.  Rob Morton, 1948-2021.” Rob was a great photographer and a great guy. He will be missed.

Treyten Lapcevich had a busy weekend. The 16-year-old from Grimsby practiced and qualified ninth for Sunday’s Pinty’s race, flew to Toronto Buttonville afterward on a private plane owned and piloted by Marvin Freiburger, ran 9th in the United LM Series feature at Sunset Speedway in Innisfil Saturday night and then drove overnight back to Trois-Riviers to make it in time for the GP3R  feature Sunday afternoon. Whew. Oh, he finished fourth in the big race. Nearly a podium in his first visit to GP3R. I asked him afterward how he felt. “I’m exhausted,” he said.

Laurence Vincent-Lapointe gave the command to start engines. A Trois-Rivieres native, she won a silver medal at the recent Tokyo Olympics (her partner was Katie Vincent from Mississauga) and a bronze when she paddled solo.

Kyle Marcelli of Barrie, a veteran of sports car racing, primarily in the United States, gave stock racing a shot in the Pinty’s race and finished 15th. He was heading for the front before losing a drive shaft. He says he’d like to keep trying and will likely do the race at Canadian Tire Motorsport Park on Labour Day weekend. And Sam Fellows, son of Ron and Lynda Fellows (Dad is a legendary Canadian sports car racer) made his first start in the Pinty’s Series and was 20that the checkers. He will finish the season driving for Canadian Motorsport Hall of Fame inductee Jim Bray. They both looked pretty happy in the photo I shot of them (top of column). Kyle is at left. 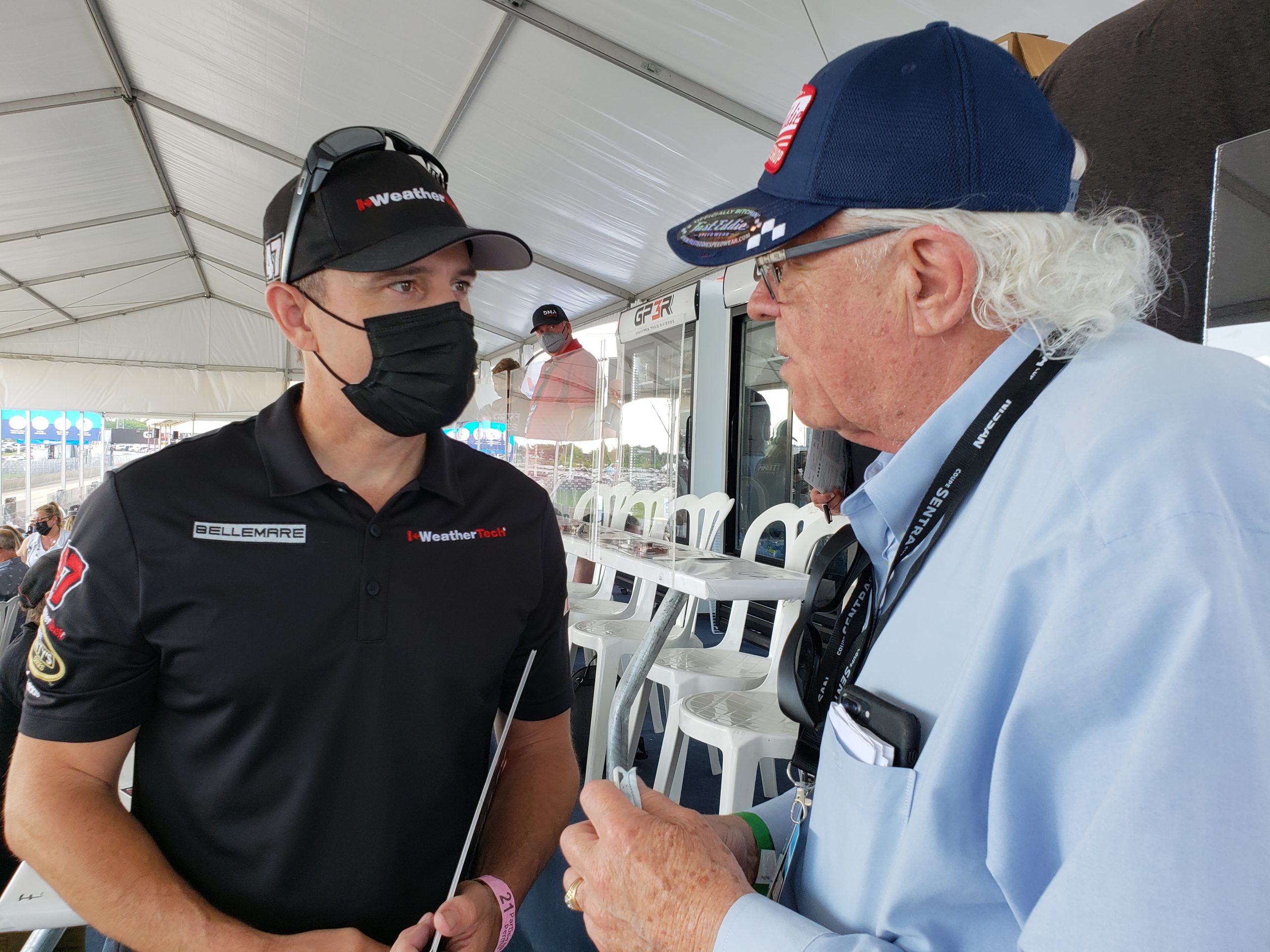 L.P. Dumoulin of Trois-Rivieres (his brother, J.F. Dumoulin, was second in the Pinty’s race with Kevin Lacroix third) won the pole for Sunday’s feature race on Saturday and broke the track record by a second. Tat’s motoring. He was doing well in the race, but a front brake caliper came loose and was dragging, slowing him down on the straightaways. He had one chance to mount a charge at the end, but Lacroix fended him off easily. Motorsport reporter Stephanie Wallcraft snapped the photo (above) of L.P. and me chatting in the Nissan suite on Saturday.

Valerie Limoges finished third in Saturday’s Nissan Sentra Cup race but that wasn’t good enough for her. So, she went out and won the race on Sunday. Kevin King was first on Saturday. In the first CTCC race, Benoit Bergeron was the winner in his No. 27 Ferrari 488 Challenge. In the second race, Martin Harvey was the surprise winner after Bergeron ran out of fuel. In TCR class, Gary Kwok won one day, and his brother Tom won the other. Although only eight drivers took the green, the action was fast and furious, as the CTCC photo below shows. 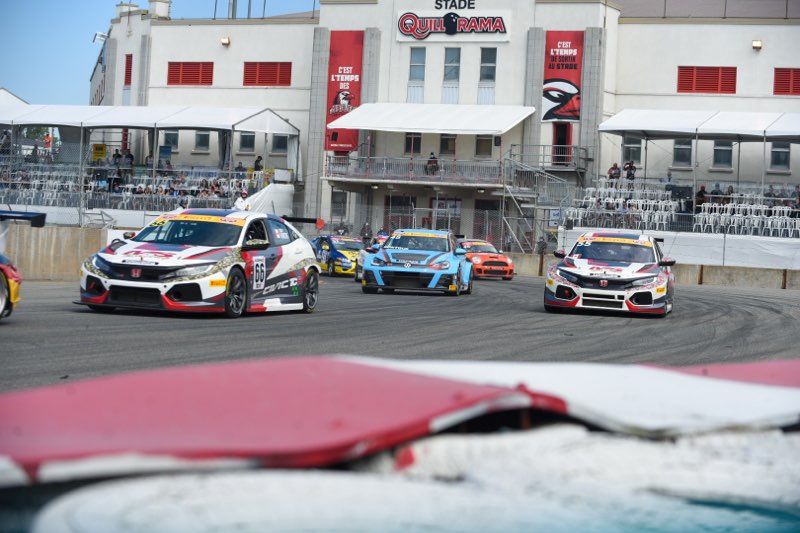 It took an hour to run the last 10 laps. It was close to being a disgrace. Here’s a link to help you sort it out.

I got a kick out of a headline I saw. It said something along the lines of “NASCAR drivers pleased with IndyCar pairing.” I bet they are. With IndyCar going first on Saturday, once you got that race out of the way, it was an all-NASCAR weekend.

I know the Indy drivers would want to go first because then, they wouldn’t have to race with all that stock car rubber laid down by the Xfinity racers.  But that’s not the point. The Xfinity Series is minor league; the IndyCar series is major league and the Big League is the headliner and should always go last. By going first, they are a support race.

IndyCar too often thinks and acts like club racers.

Formula Electric concluded its season this weekend in Berlin. The Mercedes-EQ Formula E Team wrapped up its second season in the ABB FIA Formula E World Championship as double World Champions. Mercedes driver Nyck de Vries finished eighth in the race, which was won by ROKiT Venturi Racing’s Norman Natobut, but that was enough for him to win the driver’s title. Formula E will return to Canada next year with a race in Vancouver over the Canada Day weekend.

NASCAR star Kyle Larson won the Knoxville Nationals Open for 410 sprint cars Saturday night and took home $176,000 for his troubles. It was a thousand more than he picked up at Eldora Speedway in Ohio last month when he won the King’s
Royal, worth $175,000. Donny Schatz was second at Knoxville and earned a paltry $89,000 for 30 laps work.

Jacob Dykstra had no problems winning the Pinty’s Action Sprint Tour feature Saturday night at Merrittville Speedway. He took the lead on the eighth lap and went to win his fourth win in five AST races this season. Brett Stratford, Allan Downey, Jesse Costa, and Steven Beckett rounded out the top five. The Action Sprint Tour will next be in competition at Brockville Ontario Speedway on Sat., Aug. 21, and Cornwall Motor Speedway on Sunday, Aug. 22.

Visit www.actionsprinttour.com, www.brockvillespeedway.com, and www.cornwallspeedway.com for more information. Thanks to Tommy Goudge for the info.

In motorcycle racing action at Canadian Tire Motorsport Park, Ben Young won one feature race and Jordan Szoke won two. Most of the races were moved to Sunday following a serious accident Saturday at Corner Two just past the marshal’s stand. Racer Mike Glass remains unconscious in hospital, according to his MG Racing Facebook page. Earlier in the week, at the same place, another rider was taken to hospital following a bad crash. Not a good weekend for the two-wheel set. 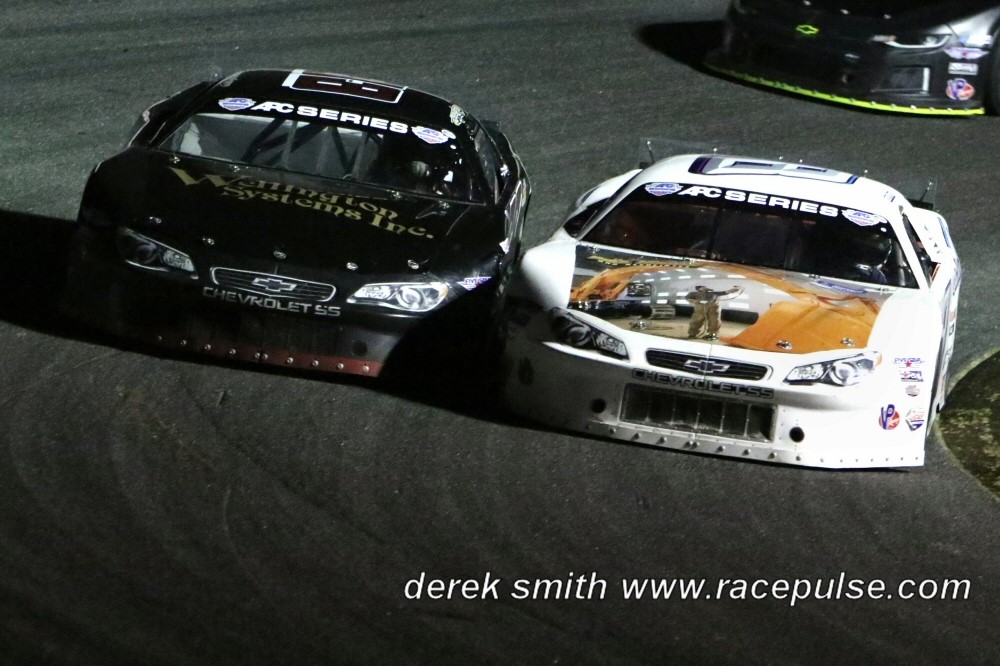