DeFrancesco to replace Hinchcliffe, NASCAR down to 12 and all the local results.

The NTT IndyCar Series issued its 2022 schedule Sunday and the Honda Indy Toronto is on the list. But IndyCar isn’t giving it a vote of confidence of happening. Here’s why.

Fourteen of the 17 races will be telecast in the United States and Canada on the full NBC network. Two of the other three will be shown on the USA Network, which is not available up here. One – the 17th – will be shown on an NBC affiliate called Peacock, which few people in the U.S. get and is also not available in Canada. Guess which race will be telecast on Peacock. Correct. Toronto.

Now, if – for whatever reason – the plug had to be pulled on the Honda Indy again (it’s happened twice before because of the pandemic), it would create serious problems for NBC. The network is in a fight for Sunday afternoon supremacy and to have your scheduled live programming disrupted at the last second would be unacceptable. The races at Detroit and St. Louis are on USA and if they should have to be dropped in a pinch, it would be irritating but not a disaster because USA shows mostly movies anyway. If a race scheduled for Peacock had to be cancelled, it would be no big deal. As mentioned, literally nobody in the U.S. rents the channel anyway and, in Canada, there hasn’t been a Honda Indy since 2019 and the race hasn’t been missed except by IndyCar fans.

Earlier in the week, when the 2022 schedule was being discussed, the Honda Indy was in play when an IndyCar official mused that it would have a date, but it would be dependent on the COVID-19 situation. When you think about it, that was a very strange statement for someone in a position of authority to make. The Jays are back in Toronto and Major League Baseball teams are travelling back and forth across the border without difficulty; ditto the soccer FC. The Leafs and Raptors plan to play this winter. So why will COVID-19 still be a problem for IndyCar next July?

It will be a problem if the Honda Indy can’t sell enough tickets to make holding the race worth the while of the promoters, Savoree-Green. That sort of thing happens in the entertainment industry all the time: few tickets sold means the singer comes down with laryngitis. As it’s pretty certain that the pandemic will still be around in one way or another for years to come, a COVID-19 excuse to cancel a race will always be available.

There is a reason that the Honda Indy is the only race on that insignificant channel. This has been one suggestion.

But let’s hope it doesn’t come to the above. Let’s hope that Toronto has a hunger for the Honda Indy and buys bushels of tickets. Let’s hope the weekend is so successful that it guarantees the race will be welcomed back for years and years. Let’s hope.

Here is the 2022 schedule (which is full of holes, but that is another column):

THE RACE: Colton Herta won the race at Mazda Raceway Laguna Seca Sunday (he always does, doesn’t he?) and Alex Palou will go into the final race next weekend in Long Beach, Calif., 35 points ahead of second-place Pato O’Ward. For anybody who missed it, you can read about the race by clicking here

IndyNotes: Jack Harvey, who has been one of the most dangerous blockers in the IndyCar series this season, got a big taste of his own medicine early in the race Sunday, thanks to our James Hinchcliffe, and that seemed to take the starch right out of him. He eventually finished 15th. . . .

Talking about James Hinchcliffe, he acknowledged to an Indianapolis-based writer the other day that he’s finished at Andretti Autosport at the end of this season (he’ll be replaced by another Canadian, Devlin DeFrancesco, of Toronto and Fort Lauderdale, although that’s supposed to be a secret) but would like to continue racing and has a couple of irons in the fire. I hope one of them is with Rahal-Letterman-Lanigan Racing. They want to run three cars next year but right now they only have one driver, Graham Rahal. Hinch will likely be able to take enough money to the team to give him a seat and he has the talent to go up against Rahal and maybe Oliver Askew if the team can find funding for him. It also would allow him to continue his relationship with Honda, which could be another source of funding. . . .

People say if Hinch is so good, how come he hasn’t done better this year. My very personal theory: I don’t think Michael Andretti likes him and I don’t think his equipment has been as up to snuff as some provided other members of that team. It goes back to when GoDaddy chose Hinch to replace Danica at Andretti and here you had a young Hinch and a young Marco Andretti going at each other every race. Blood is thicker than water and I will never forget the look of disgust on Michael Andretti’s face when he realized that Hinch was winning the race at Iowa and his own son wasn’t. . . .

Somebody else finished is Helio Castroneves. He was signed to a full year by Meyer Shank Racing in the emotional moments after he won this year’s Indy 500. But a year? He finished 24th Sunday, which is about where he’ll finish all of next year. . . . . .

Everybody, it seems, feels sorry for Alexander Rossi. The car breaks down, he has an accident – whatever, he has a hard time finishing. So, Sunday at Laguna Seca, early in the race, he got to bumping with his teammate, Colton Herta, and wound up out of the race. I’m starting to think that maybe it’s not bad luck; maybe he’s just not as good as we’ve all been led to believe . . . . . .

IndyCar is always worried about the threat of football (high school Friday nights, college games Saturday, the professionals on Sunday) but nobody else seems to be. NASCAR adjusts with more Saturday night races; IMSA goes long (the Petit le Mans). If IndyCar started thinking outside the box, it might help. For instance, how about a mid-week race? Hold it on the west coast and start it at 4:30 p.m. their time, 7:30 p.m. (or later) in the east. That’s one suggestion; there are others. . . . . . 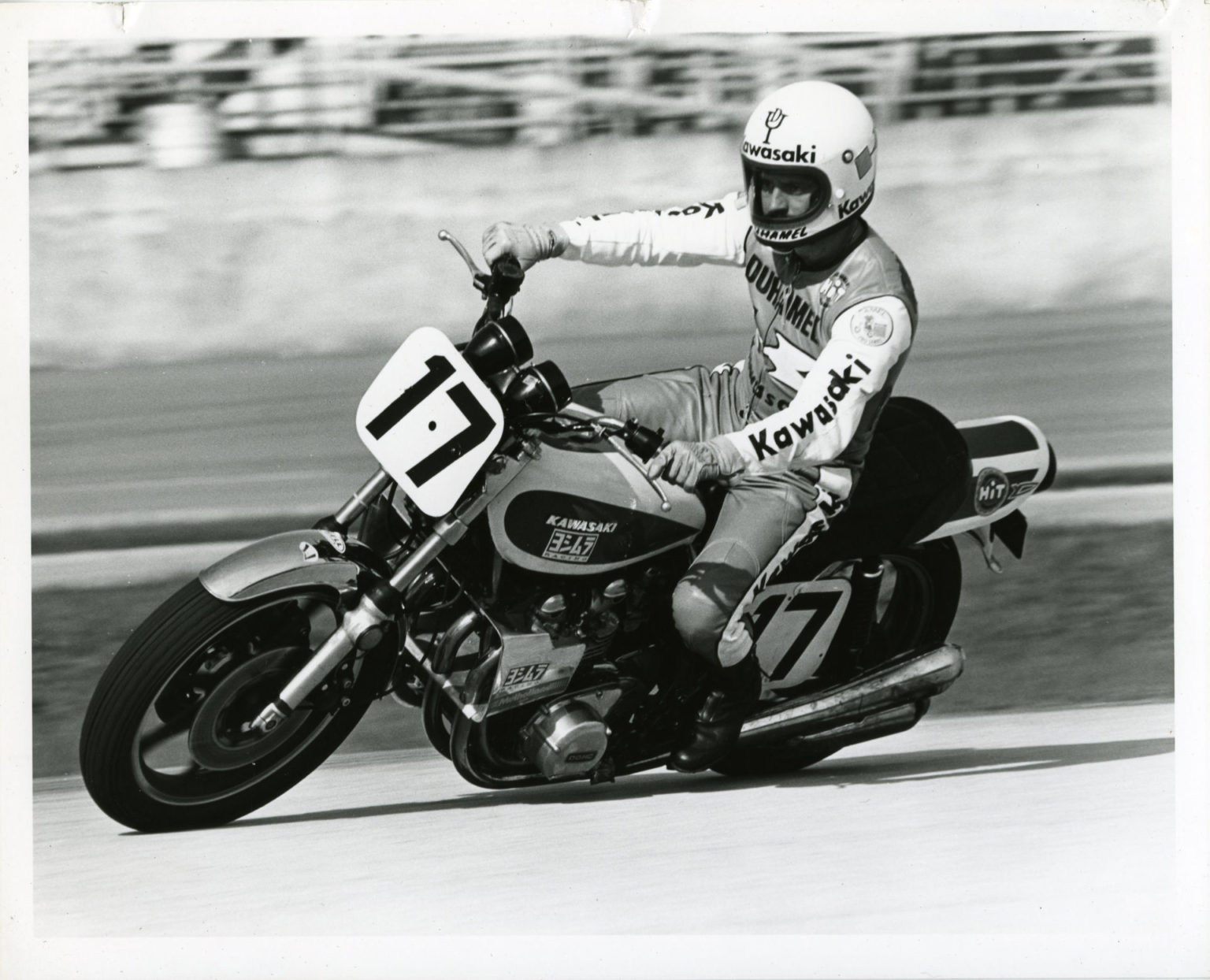 To say that I am frequently, if not always, disappointed with the Canadian media is an understatement. I can’t turn on the radio or television, of call up the Internet, without listening to, or reading mistakes, both grammatical and factual, and errors of omission, the greatest journalistic sin of them all.

I could write an essay about political coverage in this country to illustrate errors of omission, but I don’t write about politics in this column. But it’s appalling, let me assure you. The reason is that the country is run, primarily, and the coverage assigned, primarily, by inexperienced 25-year-olds who maybe made it out of J-School or graduated in political science in the last year or two and know next to nothing about the real world. For instance, while most – maybe – would recognize the name Gilles Villeneuve, when it comes to successful Canadian motorsport participants, you could pretty much forget about the rest.

Which perhaps explains the completely ignored death of Canadian motorcycle legend Yvon Duhamel, said by some to have been the greatest motorcycle racer in the history of the world. His death was recorded, of course, by the Canadian motorcycle media. But Canadian Press? The AP, New York Times (I could go on)? Nada. Same with the late Rudy Bartling. If some two-bit politician or U.S. Supreme Court judge died, they would bore you to death with a two-newspaper page obituary. But a world-class athlete? Not a chance. And it’s because they don’t know any better.

Yvon Duhamel died Aug. 17 in Montreal. He was 81. As well as being a motorcycle champion, he won the world snowmobile championship in 1970 and entered one NASCAR Cup race (then known as the Grand National division) and finished 10th. He was a member of both the Canadian Motorsport Hall of Fame and the AMA Hall of Fame. R.I.P., Yvon. For a full obit, please click here

It was 50 years ago this weekend that racer and car builder Wayne Kelly was killed in a Formula Ford race at what was then Mosport Park. It was a terrible accident. A car had hit the guardrail in Turn One at the start and an ambulance had been dispatched. A white flag, signifying a non-racing vehicle was on track, had been waved at the field as it flashed past, nose-to-tail, at the conclusion of the first lap. But no yellow caution flag was waved. It’s a miracle more cars weren’t involved but Kelly died instantly when his car went under the ambulance. Boris Spremo of the Toronto Star got the only photograph, but the Star chose not to run it. Boris published it himself in a book he put out called Boris Spremo’s Toronto.

Brian Stewart, who was in the race, reminded me about that day when we played golf last week. “He was my friend and he taught me a lot,” said the man who won both Formula Vee and Formula Ford national championships back in the day.

Kelly put his expertise to work and rejigged Formula Vees so that they became known as Kelly Vees. He did the same thing with Porsches and won races in Kelly Porsches. A member of the RCAF, he lost rank, on occasion, when superiors discovered he was using military parts and equipment to build and maintain his personal racing cars instead of paying attention to his real job in the forces. 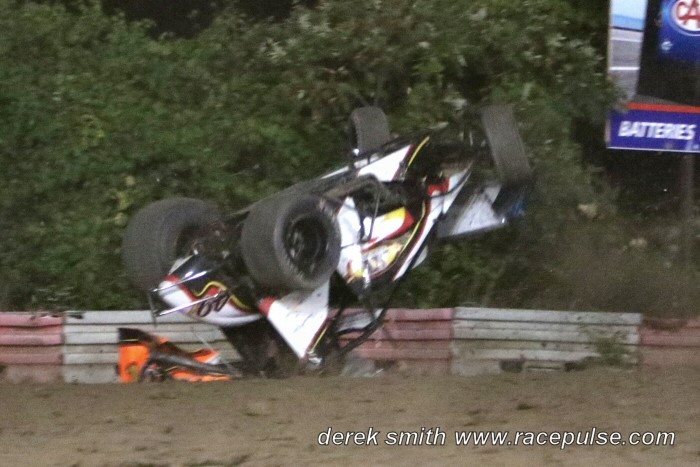 Eric Almirola, Tyler Reddick, Kurt Busch and Michael McDowell were eliminated from the NASCAR Cup playoffs Saturday night at Bristol in a race won by Kyle Larson. Kevin Harvick and Chase Elliott got into an argument afterward and did a lot of yelling, but no fists were thrown. NASCAR security stopped a newspaper reporter from using his cellphone to record the “debate” while television transmitted the whole confrontation, right up until the two drivers disappeared inside a trailer. NASCAR should remember who brung ‘em to where they are today and it sure wasn’t TV. The TV guys are shills; the newspaper guys are critics. Which would you rather have? PR practitioners or reporters who will bring you the real story. I know which of those two I would pick. For the AP version of what happened in that race, please click here:

NASCAR: Bristol goes to Kyle Larson but the story is the battle between Chase Elliott and Kevin Harvick. – Sports Talk Florida – N

In other NASCAR races at the weekend, A.J. Allmendinger won a wild Xfinity race at Bristol while Chandler Smith won the trucks race there. . .