Racing Roundup: Penske Buys Indy Speedway, F1 and NASCAR are Both in Trouble in the U.S.

And Zak Brown muddies Hinchcliffe waters, and the rest of the news...

AUSTIN, Tex. –Roger Penske has purchased the Indianapolis Motor Speedway and the IndyCar Series from Tony George and the board of Hulman and Co. This was set in motion following the recent death of Mari Hulman George, the daughter of Anton Hulman who rescued the Speedway from potential oblivion in 1946. More from me on this on Tuesday.

I am writing this at Circuit of the Americas on Sunday, where I am a guest of Aston Martin and Red Bull Racing. The Grand Prix of the United States will take place in a couple of hours and it’s expected that Lewis Hamilton will score enough points to clinch his sixth world championship (which he did by finishing second behind teammate Valtteri Bottas with Red Bull’s Max Verstappen third).

I rode down on the elevator at my hotel Sunday morning with Damon Hill, the 1996 world champion, who said Hamilton would likely wrap things up “but he has to finish the Grand Prix and that can always be a problem.” Hill should know: he very nearly lost that ’96 championship to a raw rookie – Jacques Villeneuve. And the reason JV was as close in points as he was is because Hill blew at least two races that year that he should have won.

And since I’m name-dropping, I rode the shuttle over to the infield at the track with Toronto F1 driver Nicholas Latifi and his coach, David Tennyson. Regular readers know I wrote a feature in Toronto Star Wheels on Saturday about Nick. (If you missed it, please click here. He will be in F1 next year with Williams but told me Sunday that he hasn’t yet signed the contract but hopes to soon. 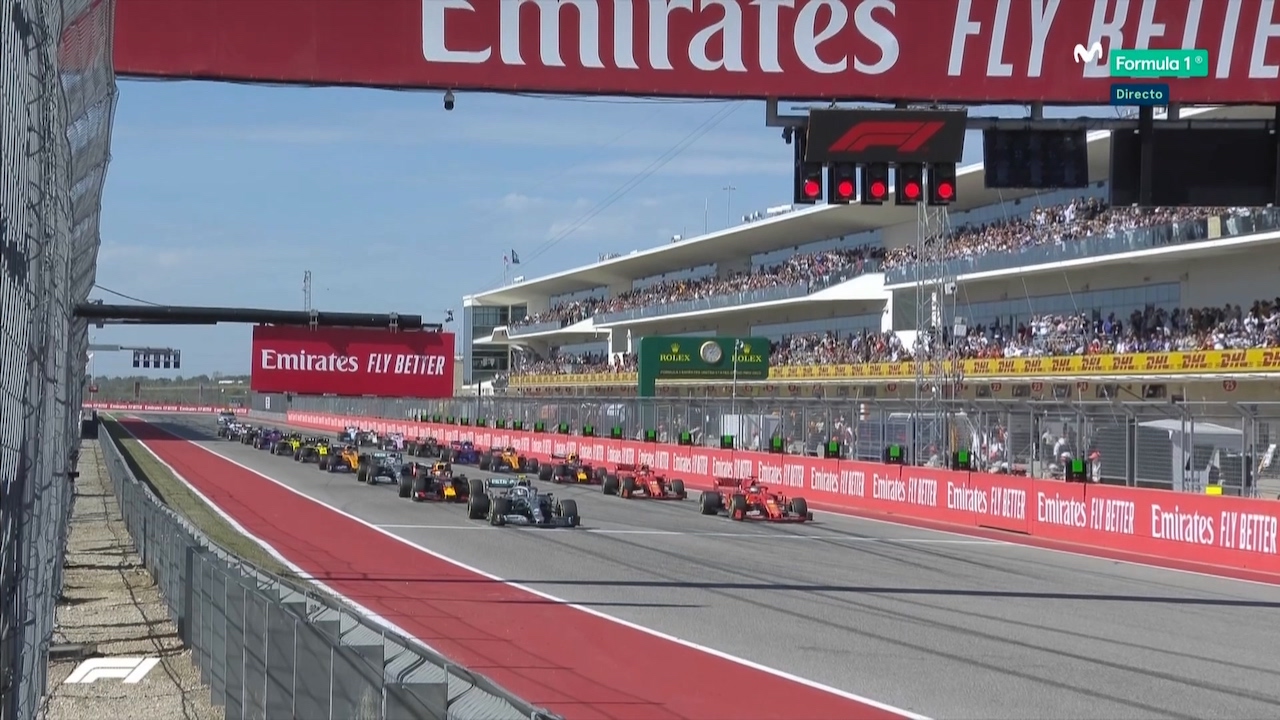 Now, F1 is having a problem in the States. They might tell you otherwise, but it’s a fact. I woke up Sunday to hear on local TV that the Circuit of the Americas, scene of this GP, had – once again – missed a deadline to apply for a state grant that would have covered the sanctioning fee required to have F1 show up. Somewhere in the vicinity of $25 million, which is not chump change. This has also happened in previous years, which makes you wonder what is really going on.

Anyway, there might be politics at play. The governor, Greg Abbott, has the power to over-ride the missed deadline and yet he refused. Why? I don’t know, but I could guess: Texas Motor Speedway is located just west of here between Fort Worth and Dallas (220 miles between them) and they held a NASCAR race there Sunday. Eddie Gossage is the long-time president of the place and if there’s one thing presidents of speedways/road-racing circuits know what to do, it’s to make friends with politicians.

Eddie doesn’t like COTA; he’s said so. Particularly when they run a race right up against his, as happened Sunday. And COTA officials are suggesting they’d love to promote a NASCAR Monster Energy road race at their track. Even Tony Stewart thinks that’s a good idea. We’ll see where all this goes but my money is on Eddie Gossage and not on COTA.

And maybe that’s why Liberty Media, which owns F1, is so keen to establish a race in Miami. Maybe they think COTA’s days might be numbered and are covering their bases. Of course, they’ve run into opposition. The people near where they want to build the course don’t want it. Now F1 has said they will run the entire race in the parking lot of the Miami Dolphins football stadium. Please. This is F1. You do not run F1 races in parking lots. (They did that for several years in Las Vegas back in the 1980s and the races were a joke.)

It is beyond me – really beyond me – why F1 does not go back to Indianapolis. It is a perfect venue – a race track in a large city where the locals welcome racing with open arms. It is a local industry. But F1 pulled up stakes there for two reasons: the fiasco that was the 2005 race, in which only six cars started, and the fact that Indy wasn’t “world class” enough for the world’s most expensive and sophisticated sport.

Bosh. They held this race Sunday in Austin, Tex. I have news: Austin is not the garden capitol of the world. Far from it, in fact. Indianapolis is New York or London compared to this place, where about the only decent downtown street is the one leading up to the State Capital building. The hotels are swanky but there are some downtown streets where you don’t feel comfortable walking during the day, never mind after dark.

If Liberty Media wants to make a success of F1 in America, they should stop trying to go to places where they are not wanted and get back to Indianapolis.

Click here for a link to tell you about Sunday’s GP.

Couple of things before we leave Austin:

* The COTA was jam-packed. All the grandstands were full and tens of thousands showed up to watch the F1 race from General Admission areas on sides of hills. At Texas Motor Speedway, where the Monster Energy NASCAR Cup race was held, the grandstands were more than half empty. Uh-oh.
*
* Martin Brundle did it again. On his grid walk, he finds Matthew McConaughey and then turns the wrong way and misses Jeff Gordon. I wonder if he’d known who Jeff Gordon is, even if he’d turned the right way.
*
* Bottas really had to be prompted to congratulate his teammate on his sixth title and then his tribute was lukewarm at best. Don’t blame him. Lewis had the championship in the bag and yet, with three laps to go and Bottas going to pass him, he pushed his teammate right off the track to keep him behind. No wonder Nico Rosberg wouldn’t go near him in the last race of his championship year; he knew very well that Lewis would wreck him. Lewis Hamilton is a great racing driver but he’s also the type of man who would slit the throat of his own mother if it would give him an advantage. It’s also perhaps why, in comparison – say – to Nigel Mansell, that he’s not that popular.

That NASCAR Monster Energy race in Fort Worth was won by Kevin Harvick, with Aric Almirola second and Daniel Suarez third. Want to know all the details? Please click here.

NASCAR has blown it. The writing has been on the wall for 10 years that it had to make changes to fewer races, shorter races, more short tracks and definitely more road courses. And they didn’t do a damn thing. Now we are seeing the results. Side-by-side races in Texas Sunday with overwhelming support for one and next-to-no-interest in the other. Even if NASCAR came out with a radical makeover for 2021, I think it’s too late.

Zak Brown gave an interview to Racer.com at the weekend to explain the reasoning behind the last-minute decision to remove our James Hinchcliffe from his seat at Arrow McLaren SP Racing in favour of Mexican driver Pato O’Ward.

In so doing, though, I think he muddied the waters even further.

First, who speaks for this team? Sam Schmidt made the announcement that Hinchcliffe was being set down and he outlined the reasons. Why did Brown feel the need to talk to a reporter and say pretty much the same things that Schmidt said? Who’s No. 1 there? Enquiring minds want to know.

And what was it that prompted Brown to speak up? The reaction on social media, obviously, but why did he feel he had to explain things when Schmidt already had?

And then, as I say, he muddied the waters. In one breath he says the team will honour the contract. Then he says he hopes Hinchcliffe gets a ride elsewhere, which means they won’t have to continue paying him. Then he says Hinchcliffe would “absolutely be under consideration” if he’s still being paid by Arrow McLaren and the team decides to run a third car at Indianapolis. But why would he say that, knowing full well that a third car will likely be entered for Fernando Alonso?

Anyway, if you want to read what Brown said at the weekend, click here.

It is ironic that this had to happen to Hinchcliffe because it’s almost a mirror image of what happened to another great anadian racing star, Paul Tracy. Tracy was under contract to drive for Gerald Forsythe’s Champ Car World Series team in 2008 when, in February, it was announced that Champ Car would merge with the breakaway Indy Racing League. Forsythe opted to close down his team but refused to release Tracy from his contract so that the Thrill from West Hill could drive for another team.

As is the case with Hinchcliffe, Tracy was under contract but didn’t have a car to drive. The difference? Forsythe stopped paying him and this opened the door for Tracy to sue. Paul won, of course, but the damage was done because he was never able to land a truly competitive ride again.

But why is it that Canadians are the ones who always seem to wind up on the short end of the stick in these situations? Is it something in the water? Are we too polite and trusting? Whatever, I don’t hear about drivers of other nationalities getting screwed in the same way.

Okay, stories I have written for the Star and thestar.com have been reports; they have not been columns. This is a column so I have things to say about the Hinchcliffe situation.

I understand business. People who play in the big leagues will often say, “this is business, it’s not personal.” And I think this was the case here. Something happened to change the dynamic and a decision had to be made, one that would benefit one guy and be detrimental to another. In short, I don’t think Arrow McLaren SP Racing deliberately set out to wreck James Hinchcliffe’s career. It might have come out like that but I don’t think they planned it.

In fact, I think they might even have done him a favour. They could have just given him some money and told him to get lost. Instead, because it’s so late in the game and there are really no competitive rides out there, they said they would employ him for the last year of his contact (at an estimated $500,000) in return for him performing certain undefined duties – which a source told me would, essentially, be James being James (talking and entertaining people). He could do some coaching of the younger drivers during testing, as well. Who knows? One thing’s for sure: if, God forbid, one of the two young guns should be injured and have to miss a race, or races, the team would have a veteran, at-the-ready replacement, ready to take over the ride.

Either Sam Schmidt or Zak Brown, or both, should have said all that – or something like that, rather than embarrassing one of IndyCar most popular drivers, a man who has gone to the wall to promote the series in everything from radio and TV interviews to appearing on television’s Dancing with the Stars (where he finished second and would have won if he hadn’t been up against a U.S. Olympic heroine).

Instead, every James Hinchcliffe fan in the world is angry with Arrow McLaren SP Racing and those who aren’t are left wondering how a team that is allegedly one of the most professional in the world could make such a mess of this.