Racing Roundup: Yet Another Canadian is on His Way

It’s Hamlin in Cup, CTMP out in the cold and will Scott Dixon retire?

A Canadian race driver is ruling the roost in this column again this week.

A quick reminder about Kingsley first. The 22-year-old from Whitby won three races in the U.S. Porsche series at Mid-Ohio last weekend. I suggested those performances would lead to bigger and better things.

Two days later, a press release arrived from Compass Racing, which Canadian Karl Thomson launched in Toronto but is now HQ’d in California, announcing that Kingsley had been signed to co-drive the team’s No. 76 McLaren 720S in the two remaining rounds of the IMSA WeatherTech SportsCar Championship’s Sprint Cup series, starting next weekend in Charlotte, N.C.

Said Kingsley: “I’m thrilled to have the opportunity to race at the top level of sports car racing in North America. McLaren is a great brand, Compass is a proven championship winner and the Sprint Cup is an incredibly competitive series.”

Good for him. Now, on to 19-year-old oval winner Lessard. And what a track on which to win your first big-league NASCAR race: Talladega Superspeedway!!

Lessard, who was driving trucks around his father’s lumber yard when he was 9 and racing cars – cars, not karts –from the time he was 12, won the trucks race when a multi-car wreck froze the field on the white flag lap with the Canadian just ahead of Trevor Bayne.

“This is amazing,” Lessard said. “I can’t believe it. I’m so happy. This is the first time I did (a burnout) after a win and I loved it. Hopefully, we can do it some more. It’s my second superspeedway race and to get my first truck series win here is amazing. That was awesome. First of all, I want to thank everyone back home, my team at Kyle Busch Motorsports. CANAC came on board with us this year. Also, Mobil 1, Toyota, TRD – this is amazing.”

There was a restart with two laps to go and fellow Canadian Stewart Friesen of Niagara-on-the-Lake led the field to the green flag. Some mad dicing at the front of the pack then saw Friesen lose control and crash and the Big One was on. As the white flag had been waved, the next flag – checkered, yellow, red – would end the race and Lessard was leading when that happened.

I first met Lessard four years ago at the Formula E race in Montreal. As I wrote at the time,unlike most young racers his age, he was not a go-karter and he wasn’t a formula-car racer. He was competing in the United States in full-size, full-bodied, big-motor, late-model stock cars. And he was more than holding his own.

In fact, he won the 10-race CARS (Championship Auto Racing Series) Super Late Model championship and that got the attention of Toyota, which took him under its sponsorship wing for 2017.

When we talked, I was amazed by his enthusiasm and focus and that until 18 months before that, he couldn’t speak a word of English. I asked him about going out of country to race, when there are many good opportunities for young people right here in Canada. Said Raphael in our interview:

“We’re in the U.S. now, because the biggest teams are there,” he said. “NASCAR is there. I want people to see me and to compete against the best of the best, and I think those guys are in the U.S. Somebody like (NASCAR star) Kyle Busch, he owns a team in Super Late Model, and I race against them almost every weekend, so I get seen by people. I think it would be fun to race in the NASCAR Pinty’s Series, maybe one day, but for me, right now, for my career and everything, I think it’s better to go and race in the U.S.”

Lessard said that one day he wants to race in the NASCAR Cup Series, “but first I just have to work very hard and learn as much as I can every race,” he said. “And get better every time I get in my race car.”

Also at Talladega this weekend, Justin Haley won the Xfinity Series race and Denny Hamlin went from fifth in Turn 4 to first at the checkers to win what had to be one of the wildest – if not the wildest – races in Talladega history. He was followed across the line by Matt DiBenedetto (who was penalized for pushing William Byron below the yellow line at the finish and officially classified 21st), Erik Jones, Ty Dillon, Byron and Ryan Newman.

For a full story on the Cup race, please click here 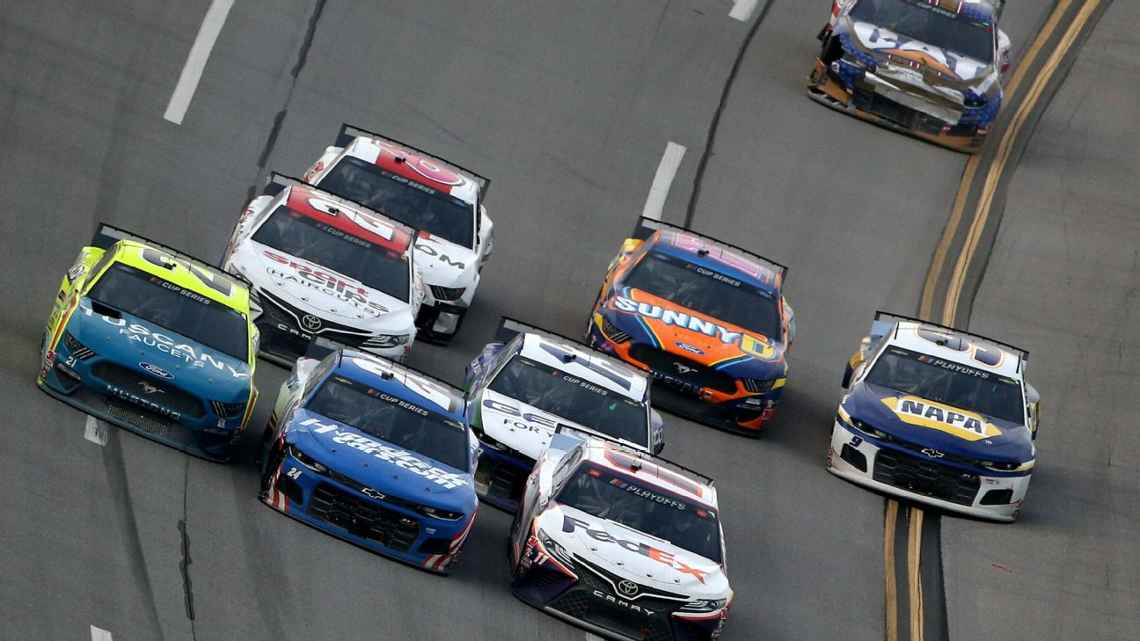 Before we leave NASCAR:

As someone who has announced at speedways, banquets, on radio shows and so-on, I know it’s tough to constantly be thinking on your feet. Many times, I found myself going down a road that was going to get me into trouble if I went all the way to the end. So I did more than one U-turn in an attempt to save face.

But I wasn’t really a professional, like the men and women who are on national TV these days. So you have to wonder how someone could come up with a clunker like this. During the Talladega Cup race Sunday, one of the pit reporters said this (paraphrase, but very close): “If it gets down to the end of this race, and Jimmie Johnson has a chance to win it, he’s going to go for it.”

Sheesh. Just what ELSE would you expect him to do? NOT try to win the race?

It really makes you wonder.

Talking about Johnson, the NASCAR announcers yet again said he would retire from Cup and move to IndyCar next season, where he would drive in the street and road-course races but no ovals. But James Hinchcliffe’s manager sent out a Tweet this weekend saying Johnson will run the Indy 500 next year. This will now give us something to talk about this winter.

I know NASCAR is a business. A huge business. But you would think loyalty and effort would count for something, wouldn’t you?  Canadian Tire Motorsport Park has done a superlative job the last eight years promoting and presenting a round of the NASCAR trucks series. The owners never said it but I know they were hoping for a Cup race someday, which would be spectacular. And Eldora Speedway in Ohio has been the “test track” for a dirt race for the Cup cars. Like CTMP, they also have been running the trucks.

So what does NASCAR go and do? They do what they should have done a few years ago by adding some road-course races to their 2021 schedule but is CTMP on the list? Nope. They poach Circuit of the Americas away from IndyCar and add Road America. Boo, I say. Boo. And will they race on the dirt at Eldora? Nope. They’re going to put dirt down on the pavement at Bristol and run a dirt race for the Cup cars there. Boo, I say. Boo.

The two IndyCar races at Indianapolis Motor Speedway Friday and Saturday were terrific. Tight, fast racing. Josef Newgarden was the winner Friday and Will Power won Saturday. That’s two drivers employed by Roger Penske driving cars owned by him at a facility also owned by him. Whatever would happen if he disappeared from the scene? Anyway, here are links: for the Friday race story, please click here; for the Saturday race, please click here.

Not many Notebook Jottings, other than to say that Formula One drivers seem to have trouble getting past the first corner in their races these days while both Indy car races saw a much larger field get through the first turn of the Indy road course without much trouble whatsoever. This is not to say that IndyCar drivers are better than the F1 guys but then again maybe they are.

Our James Hinchcliffe finished 13th in one of those races and 14th in the other. Dalton Kellett (and more about him in next Saturday’s Toronto Star Wheels section) was 24th and 25th. I can tell you this in advance: Kellett said the two Indianapolis races this weekend were his worst of the season.

IndyCar’s 2021 schedule is interesting. Gone are the ovals at Iowa and Richmond. The Circuit of the Americas race is no more, being replaced by a NASCAR Cup event. But a street race in Nashville has been added. And the IndyCars and the NASCAR Cup cars will hold a doubleheader on the road course at Indianapolis in mid-August. The Toronto race will be held at Exhibition Place on July 11. Fingers crossed COVID-19 is under control by then.

Going into St. Pete, Scott Dixon is still leading the points standings. He could win another title but – and it’s hard to put it this way – he’s not in the game anymore. As he said this weekend: “If I finish eighth or better, I can win the championship.” Eighth? So here’s something to chew on.

Dixon has enjoyed a remarkable career. He’s been in the bigs now for 20 years, starting out in CART with Pacwest Racing in 2000 and now with Chip Ganassi in IndyCar in 2020. In that time, he’s won five championships and one Indy 500. He is the third most successful driver in American championship racing history after A.J. Foyt and Mario Andretti. He has nothing left to prove. He has a young family, which includes a new baby boy, and he’s in a dangerous sport. His and his wife’s decency was front and centre when they packed up their two girls and moved to St. Pete from Indianapolis to help the family of the late Dan Wheldon handle their grief immediately following his death.

So, will Scott Dixon retire from IndyCar racing after the race at St. Pete? I think there’s a very good chance he will. 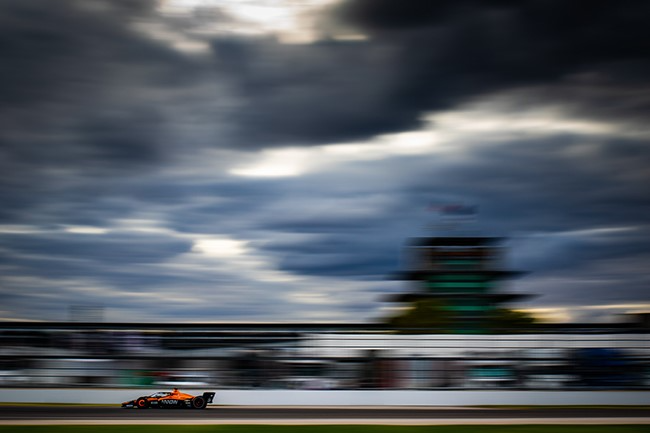 I can’t get excited about Honda withdrawing from F1 at the end of 2021. They are spending a fortune to lose, which is not a particularly good return on investment, in my books. I also suspect it has a lot to do with the pandemic. Many companies, big and small, will withdraw from racing (and other sports) because of this virus. I think Honda is just the first. F1 had also better be very careful because Mercedes and Renault could pull out too. Not now, but maybe later, depending on the economy. . . . .

Meantime, IndyCar has locked in its two engine manufacturers, Chevrolet and Honda, through to the end of the decade. And don’t ask how come Honda quit F1 and doubled down on IndyCar.  F1 costs a fortune; IndyCar costs a much smaller fortune. But if the economy crashes, watch out.

The NASCAR Canada Pinty’s Series had a short season this year but the races were so good they are being broadcast on MAVTV in the United States, the first time the Pinty’s Series is being aired on broadcast TV south of the border. The first race was broadcast Sunday.

Sprint car ace Donny Schatz hasn’t had the year he usually does, mainly because NASCAR star Kyle Larson has been racing the sprinters while serving a suspension. But Schatz can usually put it all together when it counts and he beat Larson and 23 others to the National Open championship Saturday night at Williams Grove Speedway in Pennsylvania, which paid a cool $75,000. That’s U.S. . . . .