Road trip to the extreme in Newfoundland-Labrador

Following a BMW R1200 GS through wind and rain in a Jeep Grand Cherokee was an adventure.

PORT HOPE SIMPSON, N.L.-In an extreme land, the Trans-Labrador Highway is as extreme as it gets, and I’m watching the motorcyclist ahead discover this for himself.

The rear tire of the dual-purpose BMW R1200 GS slips and skitters around the potholes of the wide dirt track, its rider white-knuckled against the cold and persistent rain. I know the guy and I can imagine what he’s going through. His name’s Dave Graham, from Ottawa, and I’m carrying his tools and spare tires in a diesel-powered Jeep Grand Cherokee tester. And his wife.

“He told me back at the picnic area that his gloves are soaked through, and his hands were purple,” says Manuella. “He’s got another pair, but he doesn’t want to get them wet while he can still keep going. I’m not sure how much longer that will be.”

The two of us have our seat heaters turned to their medium setting, and the Jeep’s automatic wipers slow down and speed up as the rain passes and falls. We’re warm and comfortable; Dave is not.

We found each other on the Internet, both of us planning a road trip to Newfoundland through Labrador while half the road is still unpaved. For a driver, the 1,000 kilometres of highway through the lonely wilderness is an adventure — but for a rider, it’s a challenge. 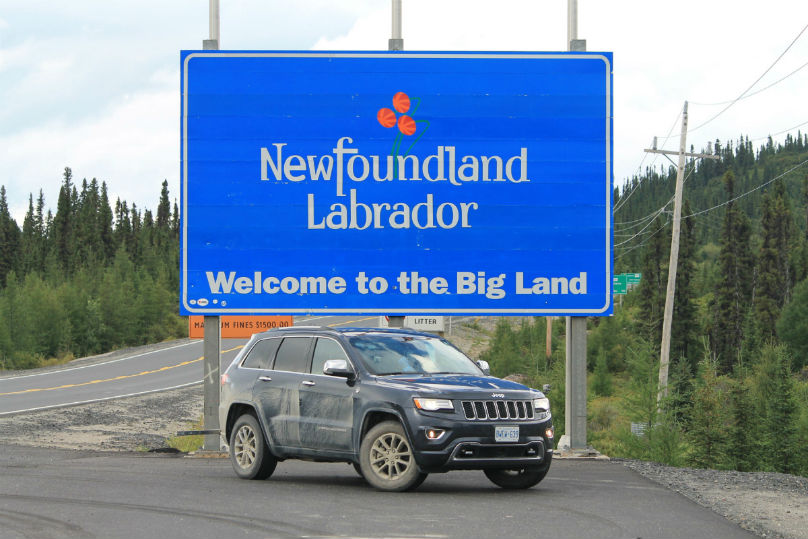 I offered to carry Dave’s luggage and drive behind, to help if he ran into problems far from assistance. He asked if there was room for Manuella too, for whenever the weather turned wet, and I was happy to offer the passenger seat. We met up in Baie-Comeau, on the north shore of the St. Lawrence River, some 400 km east of Quebec City, and it immediately started to rain.

None of us really knew what to expect from the road north to Labrador. We knew it would be tight and winding through the rocks and woods, and paved for its first third of the way as far as the massive Daniel-Johnson Dam. Dave filled up with gas and set off north. I topped off the diesel fuel in the Jeep while Manuella adjusted the passenger seat and turned up its heater.

The road north whipped back and forth like a wide cottage road, following the quickest and easiest route to the dam. It turned to gravel after the damsite and the surface became slippery — all four wheels of the Jeep dug in through the curves while Dave, somewhere up ahead, wrestled his motorcycle through the gumbo. Manuella and I enjoyed our coffee and watched the clouds settle in.

It’s nearly 600 km north to Labrador City, with just a couple of settlements along the way, and the road returned to pavement as the sunshine returned, before changing back into poorly rutted mud for the final stretch to the provincial border. Trees grew shorter and the land lay flatter; we followed beside a railroad track for much of the way.

The true Trans-Labrador Highway heads east for another 530 km from Labrador City to the region’s main port at Happy Valley-Goose Bay. It’s a fairly new road, created with gravel in 1992 as a supply route that also connects the massive power plant at Churchill Falls. The highway itself is now freshly paved and near perfect — smooth and empty, with sparse, low forest to each side and occasionally a lake or a bridge over a river. 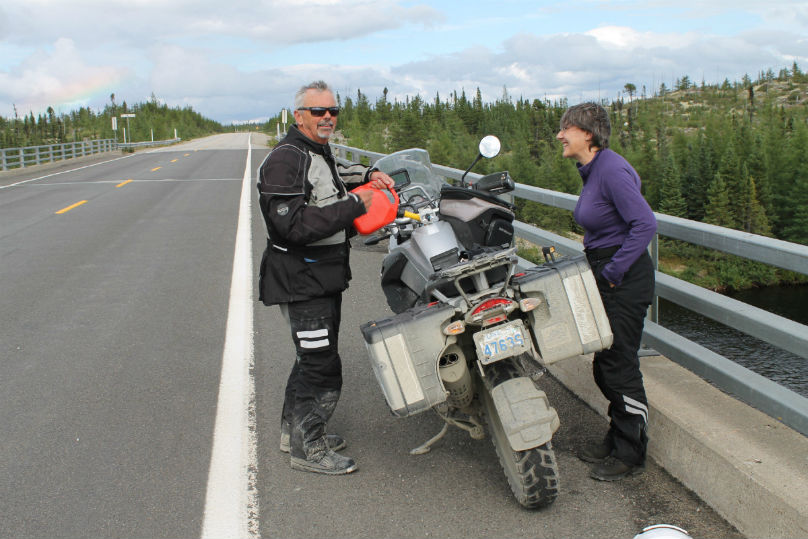 Manuella and Dave rode an hour ahead for this section, and I spent my time alone in the Jeep, listening to satellite radio and watching the distance roll by. When I stopped to explore a riverbank, I was swarmed by blackflies that chewed chunks out of my scalp.

And now today, the 400 km of road south from Goose Bay is half under construction and half in danger of washing out. It’s only existed since 2010 — before then, there was no road at all and the only access was by boat to the ports. Manuella is back in the passenger seat and we’re watching Dave skitter beneath the downpour.

Why do we do this? We could have driven to Newfoundland on the Trans-Canada through Nova Scotia, like everyone else. But that wouldn’t be an adventure, and when we finally pause for the night at Port Hope Simpson, Dave collapses on the step of the small hotel and sits there, just catching his breath.

The hot engine of the big BMW is still ticking from the water on its metal, and the wheels of the Jeep are caked thumb-deep in mud. But we made it, and we’re happy. This road is one of Canada’s last great frontiers.

Tomorrow, we’ll drive another 130 km on the gravel to the paved highway at Red Bay, and then down to the ferry and over to the island of Newfoundland. In a couple of years, this stretch of road will also be paved, bringing tourists up from the island to visit the nearby pioneer settlement of Battle Harbour.

But for now, it’s rugged and a challenge and everything that Canada used to be. We unload the vehicles and head inside, looking forward to comfortable beds and the promise of the morning. 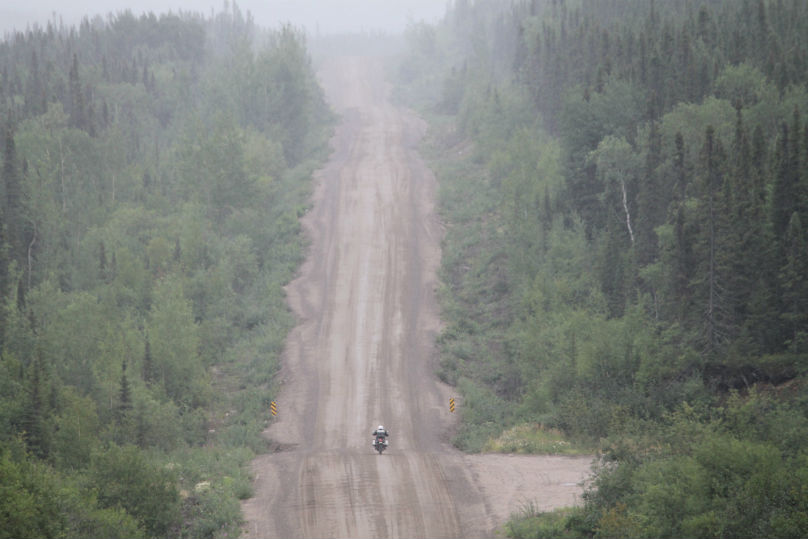