The Corvette Z06 is a 650 horsepower Weapon for the Track

And we lap it at Canadian Tire Motorsports Park courtesy of the Ron Fellows Driving Experience.

Bowmanville, Ontario – The new Corvette ZR1 has been stealing headlines left, right, and centre and for good reason. With its 755 hp 6.2-litre LT5 supercharged V8, race-ready suspension, standard magnetic dampers, and standard carbon ceramic brakes, there are very few cars that can hang with it on a track.

Factor in the price (starts just under $140,000) and there’s no way you can go faster for less. While a low entry price and big performance have always been the Corvette’s calling card, the C7 chassis has elevated Chevy’s super sports car to world-beating status.

To get that level of power elsewhere you need to step into something like a Ferrari 812 Superfast or a Porsche 911 GT2 RS, both cars that can easily approach $400,000. And the Ferrari is more of a Grand Touring affair and less of track monster.

But there is an even better deal to be had, and it comes in the form of the Corvette Z06, and with an entry price $93,000 CDN it has to be the best bang-for-your-buck on the market.

Also driven by a 6.2-litre supercharged V8, the LT4 engine in the Z06 pumps out a prodigious 650 hp and 650 lb-ft of torque. Considering that the car tips the scales at just under 1600 kg, that power rating is downright enormous.

General Motors Canada was gracious enough to invite a few members of the media, myself included, to Canadian Tire Motorsports Park (CTMP) to experience just how good these cars can be on the track. 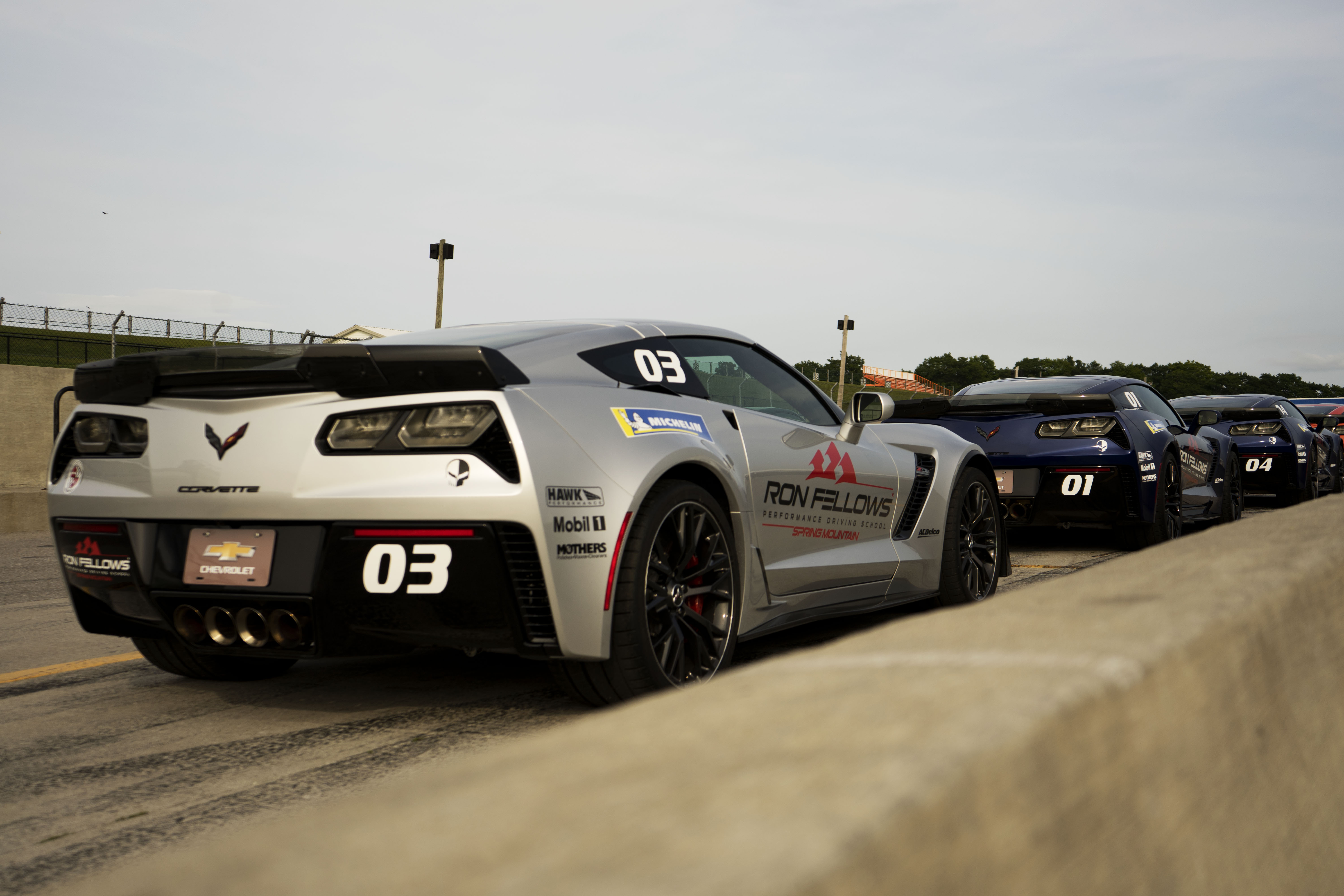 We would be partaking in a condensed version of the Ron Fellows Driving Experience that’s based out of Spring Mountain Motor Resort, in Las Vegas, Nevada.

For those not familiar with Ron Fellows, he is one of the most accomplished race car drivers this country has ever seen, with wins not limited to the 24 hours of Daytona, multiple wins in Nascar’s Sprint Cup series including the Nationwide, and Trucks series and three class wins in the American Le Mans Series.

Ron, who was hanging out with us in the paddock, is an all-around great guy and one of Canada’s most active racing ambassadors and he has helped turn the once ailing Mosport Park into the world-class racing facility it is today.

The Canadian Grand Prix was hosted there until 1977 when it was moved to its current home in Montreal. CTMP is now a regular circuit in Nascar’s Pinty Series, the Camping World Truck Series, the Pirelli World Challenge, and the IMSA WeatherTech SportsCar Championship.

It consists of 10 corners, some blind, with huge elevation drops and a long back straight where you’re able to hit some very high speeds.

CTMP is a fast track with some hairy but exhilarating corners. Take turn two, for example, this is a high-speed double apex left-hander that you enter blind only to find that it drops down what feels like a hundred feet and then quickly flows into turn three which requires you to basically stand on the brakes to slow down to an appropriate entry speed.

At least that was my experience in the Z06.

But to begin our day we started off with a brief classroom session, conducted by Ron Fellow’s son Sam, a tall dark-haired bloke as passionate about racing as his father.

We would be getting a quick overview of the fundamentals of racing: cornering, oversteer and understeer, following the proper racing line at all times, and most importantly braking in a straight line during corner approach. A technique not everyone agrees on, according to Sam, but it’s one that his father taught him and who are we to argue with racing royalty. 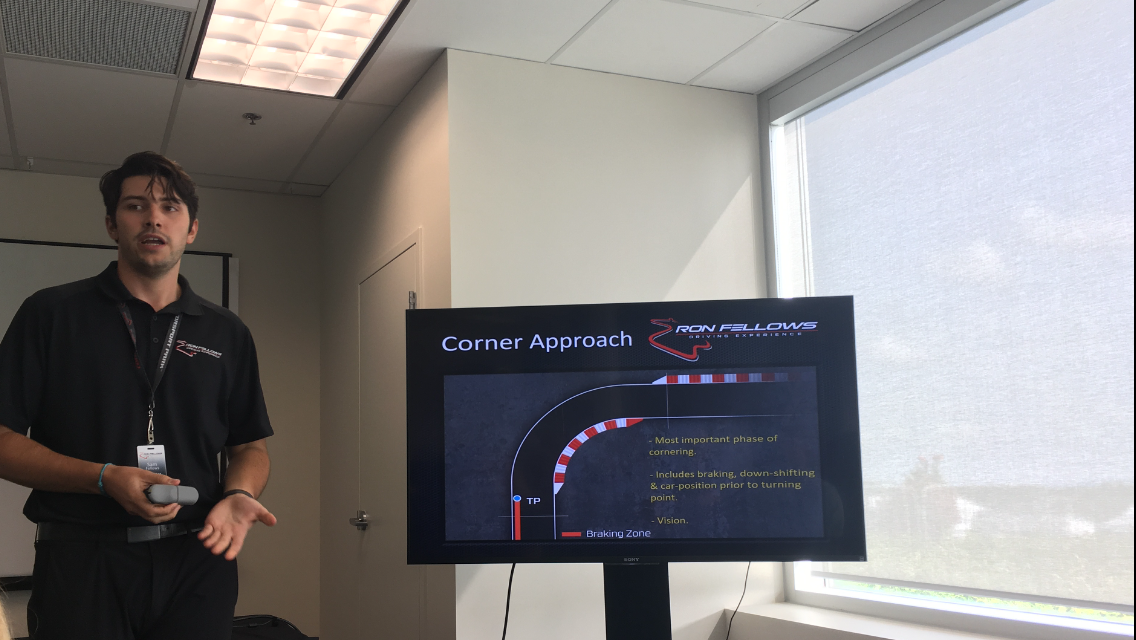 We also learned a little about the cars we were about to drive. By now it’s obvious that the car most of us were here for was the 2018 Chevrolet Corvette Z06, but we started off in a 2018 Chevrolet Camaro SS 1LE. The 1LE option is basically a track pack but it comes chock full of track day essentials like transmission, differential and engine oil coolers, magnetic ride shocks, larger Brembo brakes, an electronic limited slip diff, and 20 inch wheels with a 305 section rear tire.

Its naturally aspirated 6.2 L LT1 V8 loves to rev and sounds amazing when thundering down the back straight at full chat. What impressed me most about the Camaro was how tough it felt, like nothing I could do to it would break it. The powerful brakes remained fade-free after 5 laps at a decent pace. Equipped with the 1LE package the Camaro SS is capable of pulling 1G through the corners.

This track session was a lead-follow exercise, meaning the instructor would lead and two cars each driven by one of us would follow behind. The more we kept up with the pro in front the faster he went. 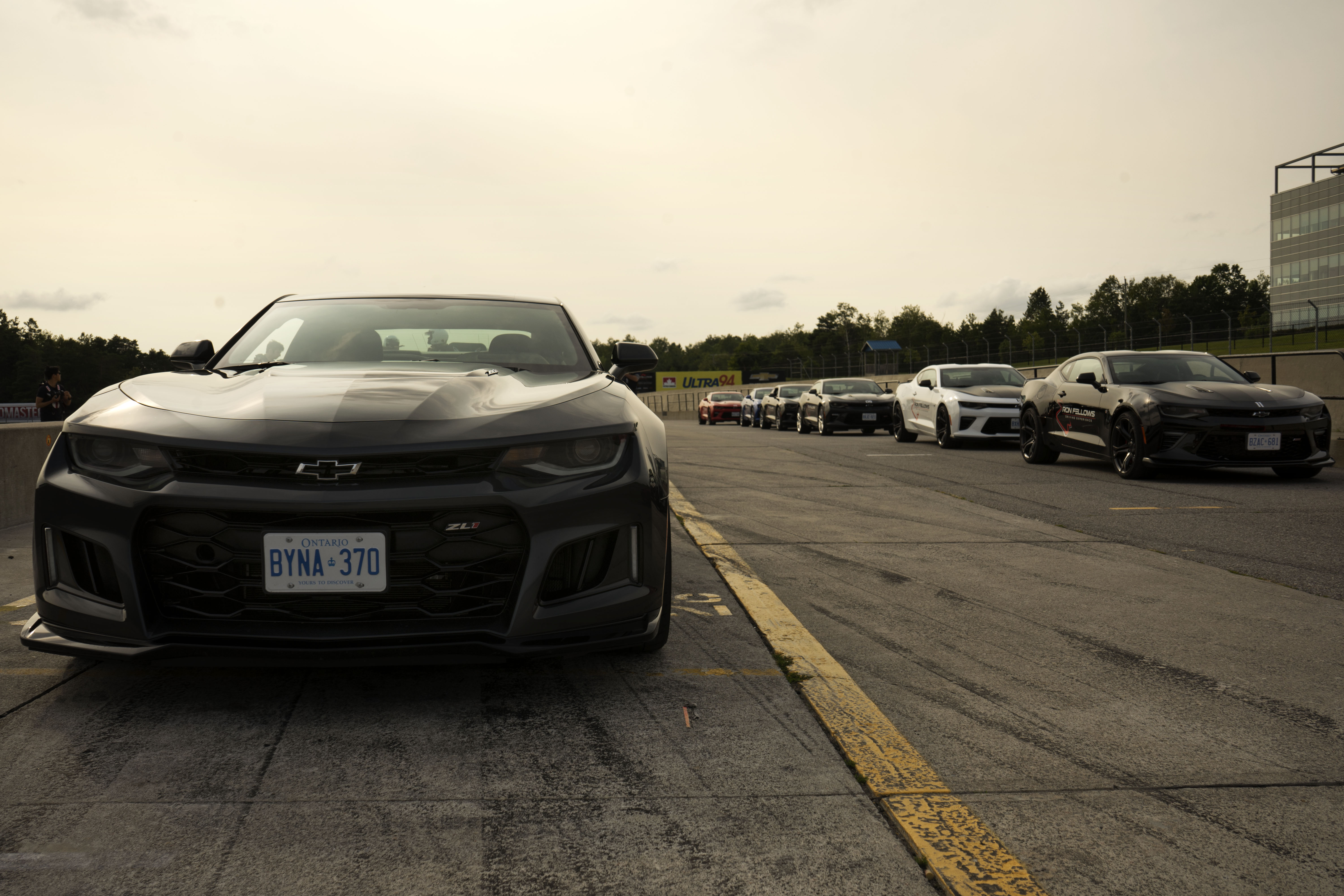 This was a great way to learn the correct racing line, but on top of that, it gave me the confidence to push harder than I normally would have if I was out by myself. And the further I pushed the more comfortable I became with approaching the car’s limits and my own, which in turn made each lap more thrilling than the last.

So with the warm-up session finished, I stepped out of the Camaro and into the hot seat.

The Z06s looked epic in the evening light and its performance credentials need little introduction. We were lucky that they came equipped with the Z07 package that included carbon ceramic brakes and adjustable aero pieces and a trick see-through rear spoiler. Capable of generating significant downforce, all this aero trickery could be felt through some of the faster corners at CTMP. 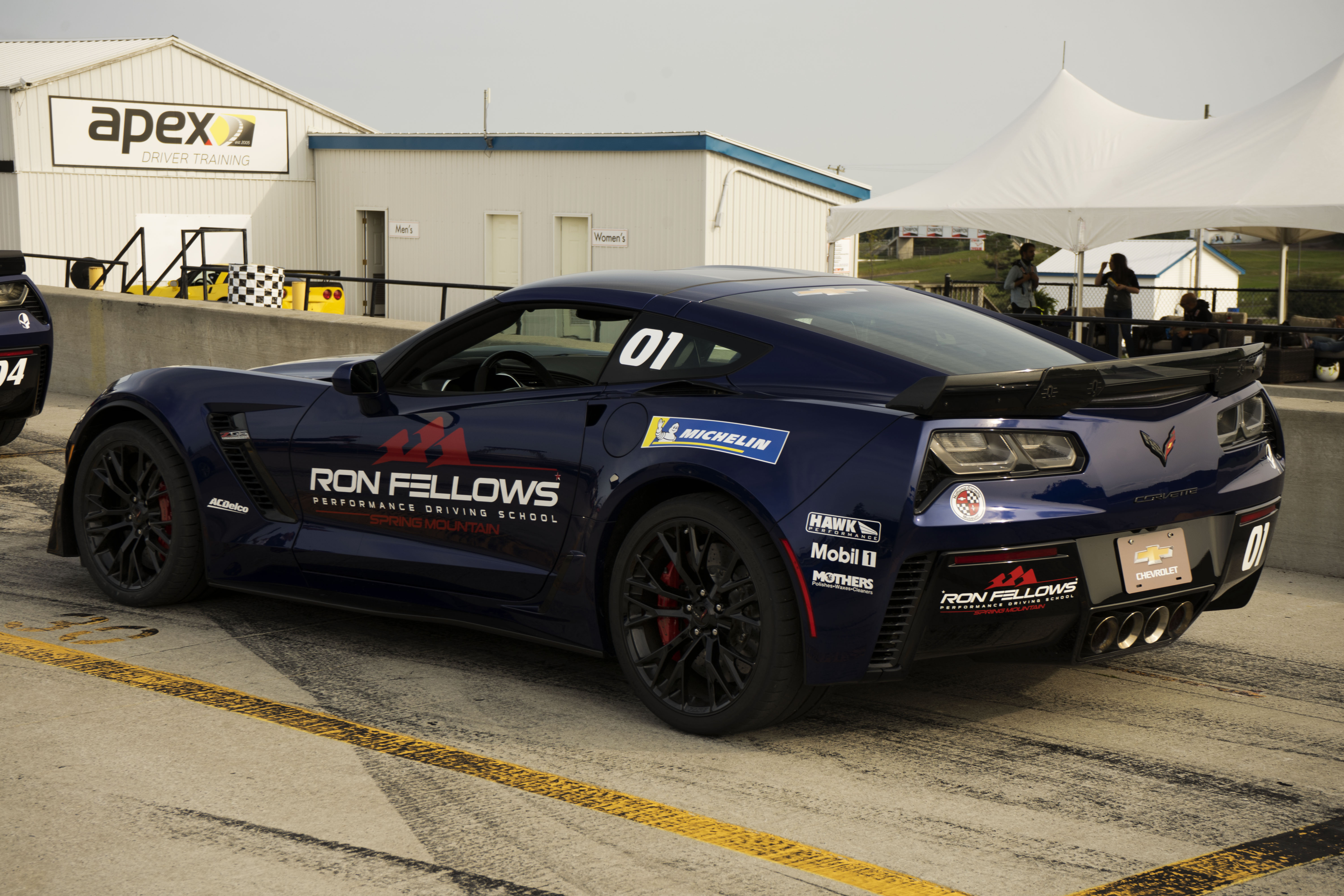 Like a frisky puppy that gets excited when you jiggle its leash, the Z06 gets excited when it’s in the vicinity of a track. This car was born from racing and you can feel it as soon as you slot the 7-speed manual into its well-defined gate and let out the surprisingly light clutch.

The expected supercharger whine is barely audible as the revs climb. I shift into third gear picking up speed as we exit pit lane. This time around Sam was in the lead car (also a Z06) and as soon as I heard his LT4 open up I followed suit. The sudden and forceful acceleration caught me by surprise as my torso was tightly pinned into the stiff but very supportive seats.

The power was raw, preternatural, unrelenting, and utterly addictive, but short-lived as the first corner quickly approached and we had to get on the brakes—hard.

Handy little orange cones were placed at the apex of each corner, the Corvette’s sharply creased front fenders clearly visible from the driver’s seat acted like markers helping to aim at each cone. The wide 285 front section tires made for a front end that felt like it could be chucked into a corner at virtually any speed, the grip almost limitless.

The balance of the chassis through each and every corner was remarkably neutral. And no matter how much we pushed, it felt like there was always more in there. As Sam picked up his pace we did our best to keep up, building more and more of a rhythm with each passing lap, getting more and more comfortable with the incredibly high limits of the Z06.

At one point we ended up passing three groups of drivers who were a bit slower, obviously not having as much fun as we were. A convenient G–meter on the dash showed that I pulled over 1G in a few corners—on Michelin PS4 street tires—and my neck and shoulders sure felt that after a few laps of high-speed cornering.

Long gears, a flat torque curve, and power everywhere on the tach, meant that just like the Camaro SS most of the track was driven in third gear, with one shift to second right before entering turn five and then up to fourth on the back straight. I was able to hit 240 kilometres per hour there before stomping on the brakes and shifting back down to third to enter turn eight. The stability during heavy braking was remarkable, with only a slight shimmy from the rear end, and the giant carbon ceramic brakes showed absolutely no hint of fade, lap after lap. 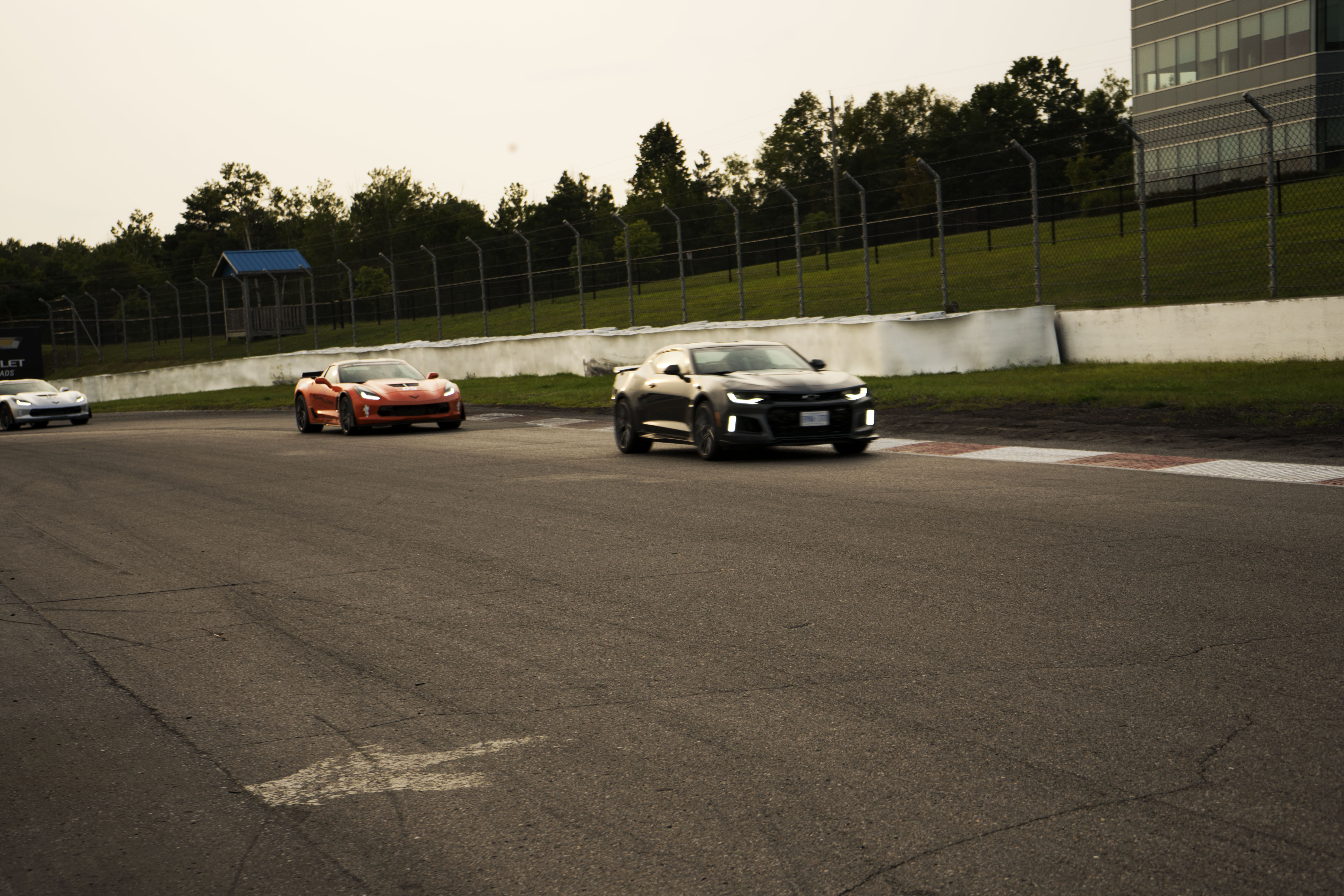 I admittedly had a butt-clenching moment especially on the aforementioned double-apex turn two where I entered too hot and felt the back get a bit loose, but the ‘Vette didn’t bite. It just found grip and stuck to the racing line with barely a wiggle. A true track weapon built to lap all day long without protest.

The remarkable thing here is just how approachable the Z06 is for a novice driver like myself. A rear-wheel drive car with this much power should not be so easy to drive quickly around a circuit, and CTMP can be a demanding track even for seasoned pros. But this Corvette makes you feel instantly comfortable, like returning home after a long trip. It allows you to hone your skills and push a bit further with every successive lap, learning where more speed can be gained.

In the hands of a pro like Ron Fellows, there are only a handful of production cars out there that would be able to catch a Z06 on the track, regardless of price. And to be able to gain even a small amount of his go-fast wisdom through the excellent tutelage of his driving school was a real privilege, and the most fun I can remember having in a long time.

For more info on the Ron Fellows Driving Experience at CTMP click here, and for more on the program in Las Vegas click here.