It’s exquisite in every way

Which is just as well because I don’t think the LC 500 would fare too well in an objective piece of consumer advice.

Certainly, at its steep as-tested price tag of $120,000, there are many, many options one would consider as “better value” than the LC 500. The Porsche 911, Ford Mustang Shelby GT500 and Nissan GT-R are just a few other six-figure GT coupes which would not only provide a much higher level of brand recognition and excitement for the neighbour children, but which would simply annihilate the LC 500 in a drag race.

Sincerely, if you’re looking for a blisteringly fast sports coupe from Toyota, you should walk right past the LC 500 and spend around half the money on a new Toyota Supra. It’s faster than the LC 500. And it’s far more exciting around corners. 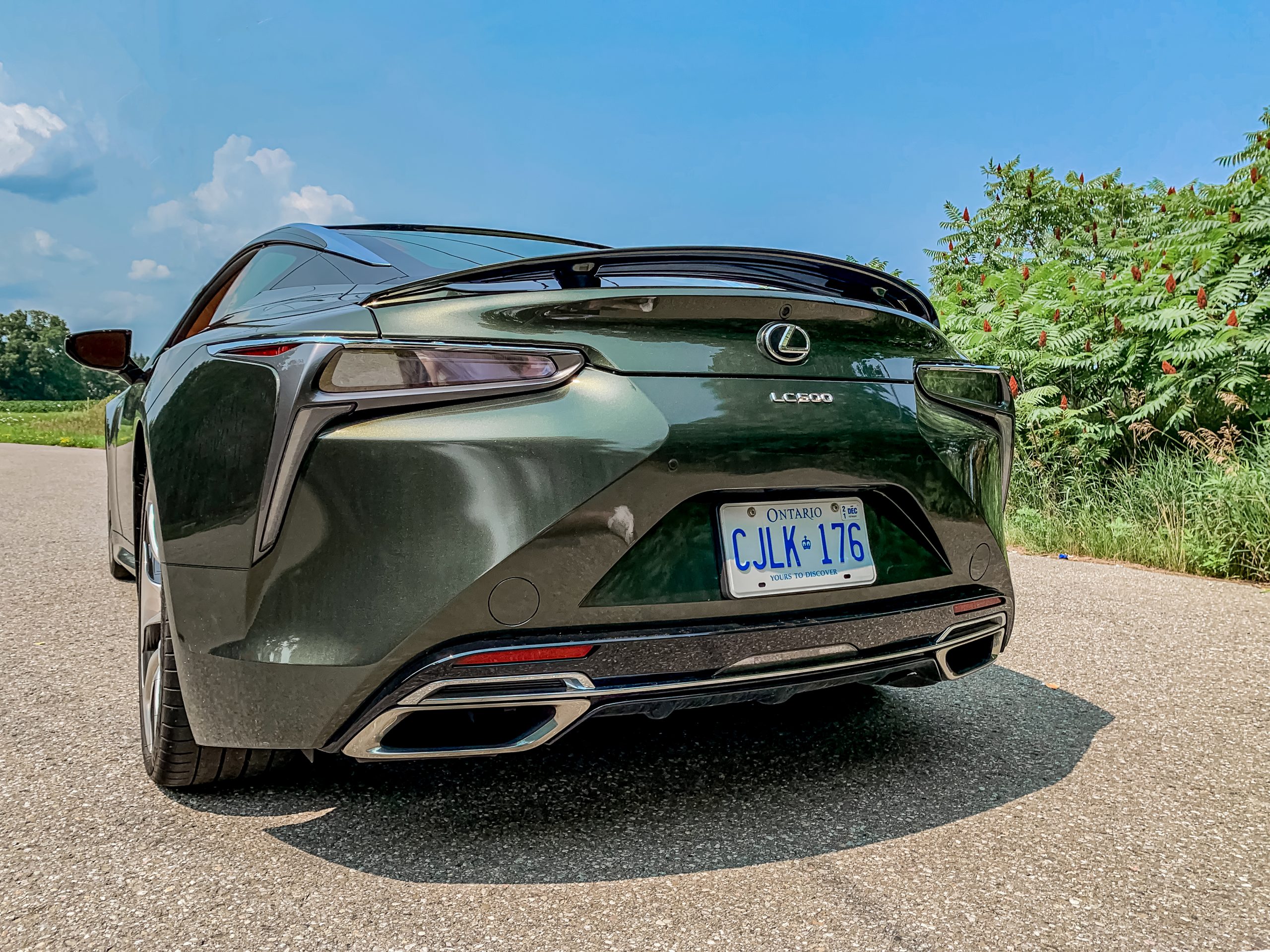 But it is the best. By a far stretch.

What I love most about the LC 500 is that Lexus didn’t bother chasing lap times or funneling in race technology that could never be properly enjoyed on the street.

Instead, it seems that Lexus did what they do best — refine a concept. They focused on making the LC 500 a simply superb, long-legged GT coupe which elevates the simple task of driving to a destination into a sublime, even blissful experience.

The first thing you’ll notice about the LC 500 is its simple silhouette. The iconic, acid trip Lexus front grill aside, the LC 500 is fairly understated when compared next to the kinds of over-excited, desperate designs (read, “Corvette C8”) which are becoming more and more commonplace. The car’s sweeping, long side profile conjures up images of Toyota sports cars past such as the Toyota 2000GT, Lexus LFA and even the Toyota Supra A80. 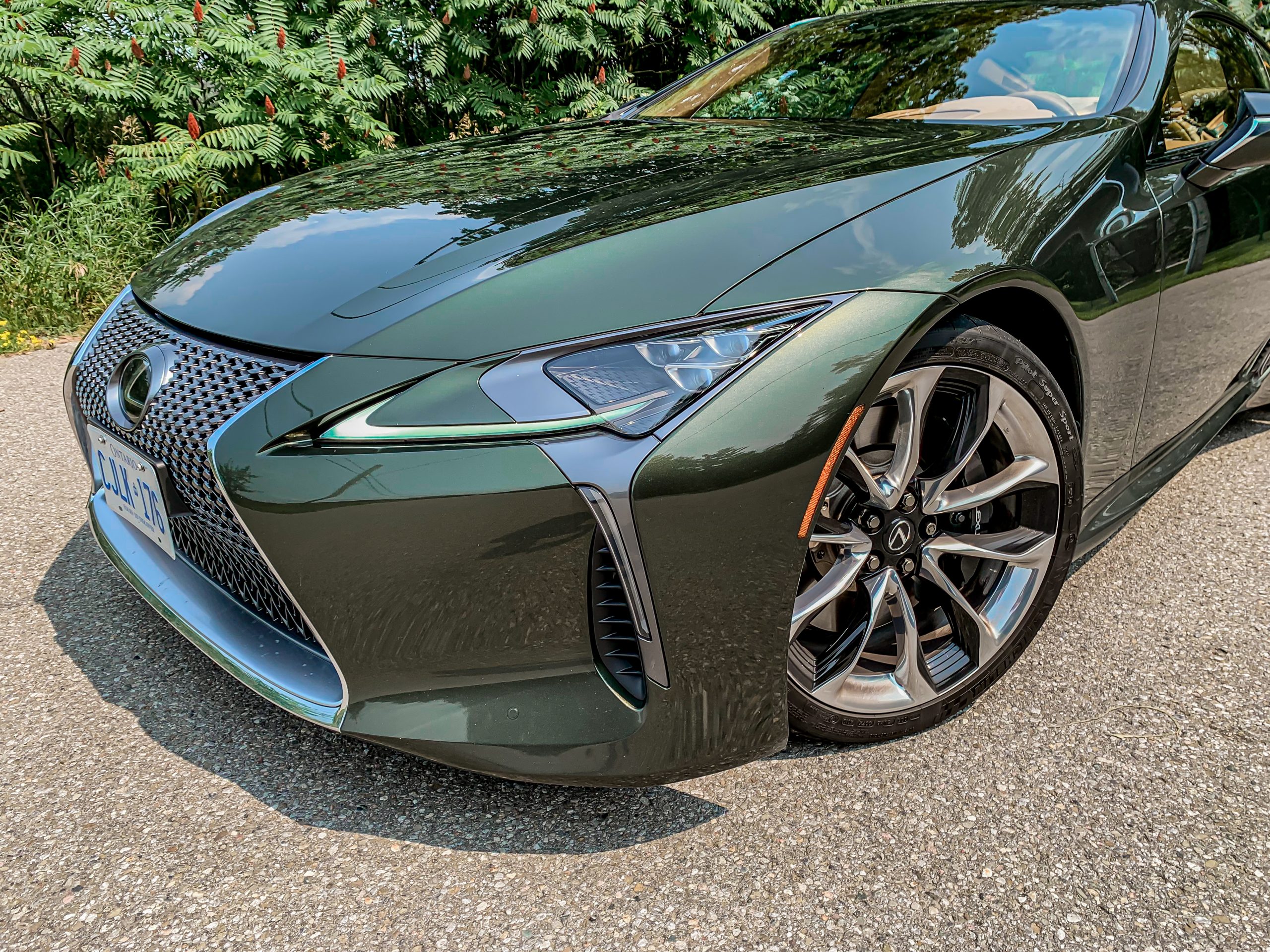 And despite the obvious homage to the magnificent (though doomed) LFA hypercar, what the LC 500 reminds me of most is an A80 Supra.

A lot of us think of an A80 as the fire-spitting supercar we see killing Lamborghinis to the tune of turbo whistles on YouTube. And they certainly can be that. But the truth is that the A80 is, at its core, a big, lumbering, 2 + 2, GT coupe. They’re floaty, soft, deliberate things.

In truth, the new A90 Supra is far closer to the idea of what most of us think a Supra is in our minds — a sharp, nimble, razor’s edge sports car. The A80 never truly was that. And neither is the LC 500.

At any rate, after you’re done soaking in the exterior and its various carbon fibre accents, you’ll want to get into the LC 500 for a drive, which is a bit like hopping into a velvet-lined X-Wing fighter. The suede, the leather, the brushed aluminum, every dial, everything you interact with feels absolutely exquisite. But somehow it doesn’t feel gotti or brash or overwhelming on the inside (*cough* Mercedes). Everything is simple, elegant and easy to find. Comfortable, too.

Then you hit the start button and the 471-horsepower 5.0-litre V8 roars to life, delivering you one of the most aggressively beautiful engine notes you or anyone on the planet has ever heard. It’s like if someone stuck a heavy metal band in the middle of a symphony orchestra. It’s thunderous and angry, yet melodic and soothingly rhythmic. It sounds like focused rage and feels like being in the middle of an EDM dance pit just before the beat drops. 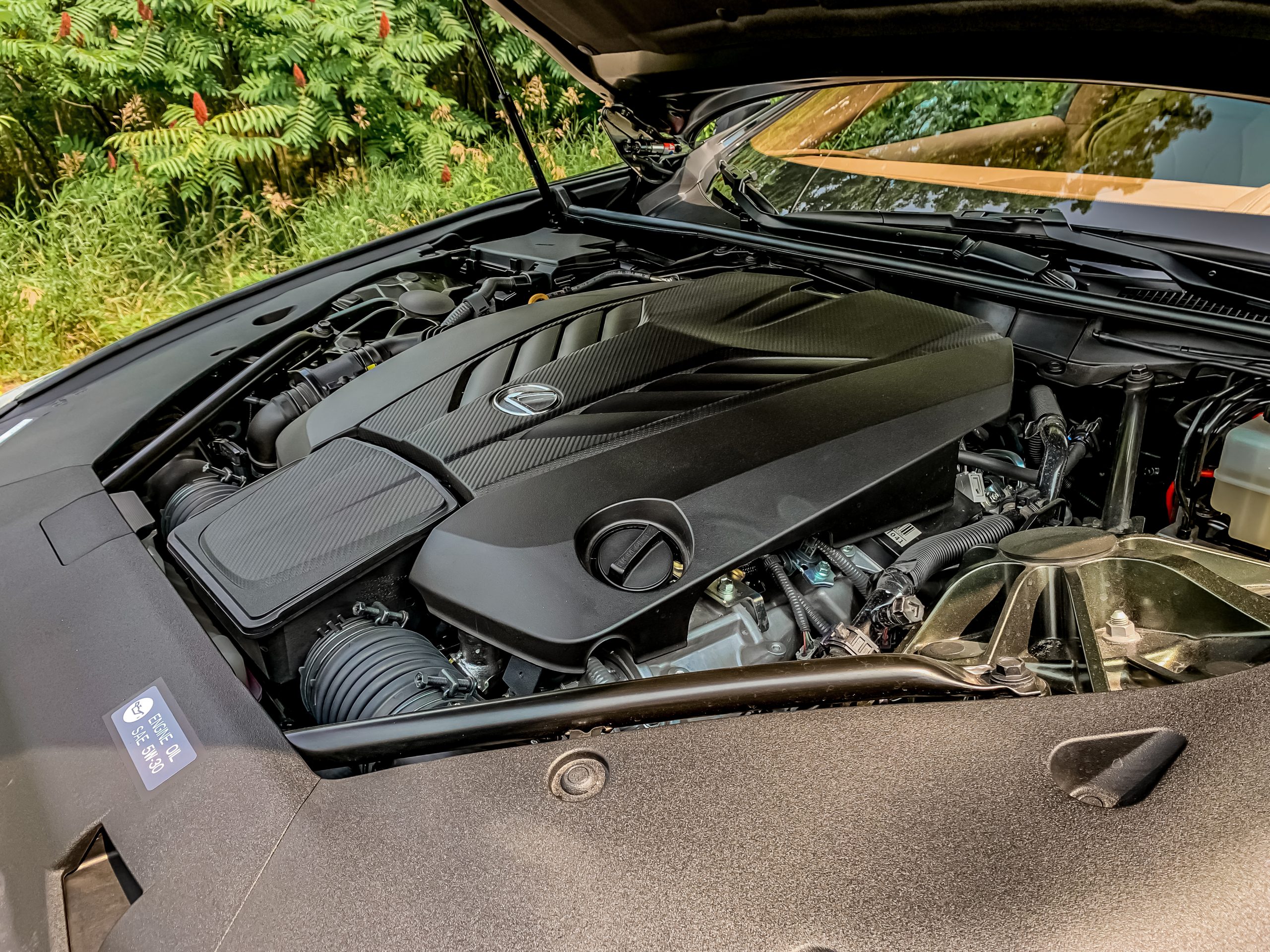 The engine note sounds like it was composed by Mick Gordon.

A beat later and your gauge cluster illuminates to life as the digital tachometer — another hangover from the LFA — presents itself and gives you a quick taste of what it’s like to watch the needle bounce off the rev limit.

With a dial on the upper right-hand side of the gauge cluster, you can select Sport + mode, which will turn all of your dials an aggressive white and red colour scheme. Your throttle stands ready to deliver all of the 471 horsepower on a dime and the steering feels sharp and precise in a way it’s beginning to seem only Toyota can dial in.

Of course, if during your drive you find yourself caught in a torrential thunderstorm on the highway (which I did several times during my time with the LC 500), simply flip the dial into Comfort mode and the LC 500 stays perfectly planted and unwavering at speed.

Whatever the opposite of white knuckles is, that’s what this car gives you.

Which is not to say it can’t put an enormous grin on your face. In fact, I challenge anyone to not be filled with pure joy when they bury their foot into the accelerator and listen to the 5.0-litre V8 sing.

You will accelerate hard through every underpass just to hear the engine note more clearly. Every. Single. One. And it will never, ever get old.

And while the LC 500 is no track monster, it’s not exactly a slouch either. Pinning the accelerator is a bit like punching a panda bear in the face. At first, you feel guilty for doing something so crude and barbaric to such a majestic creature. But then, you simply aren’t ready for the savagery of the response.

Every exhaust burble from the screaming V8 upon upshifts will restore your faith in humanity.

Here’s the best way I can describe the experience of driving an LC 500. 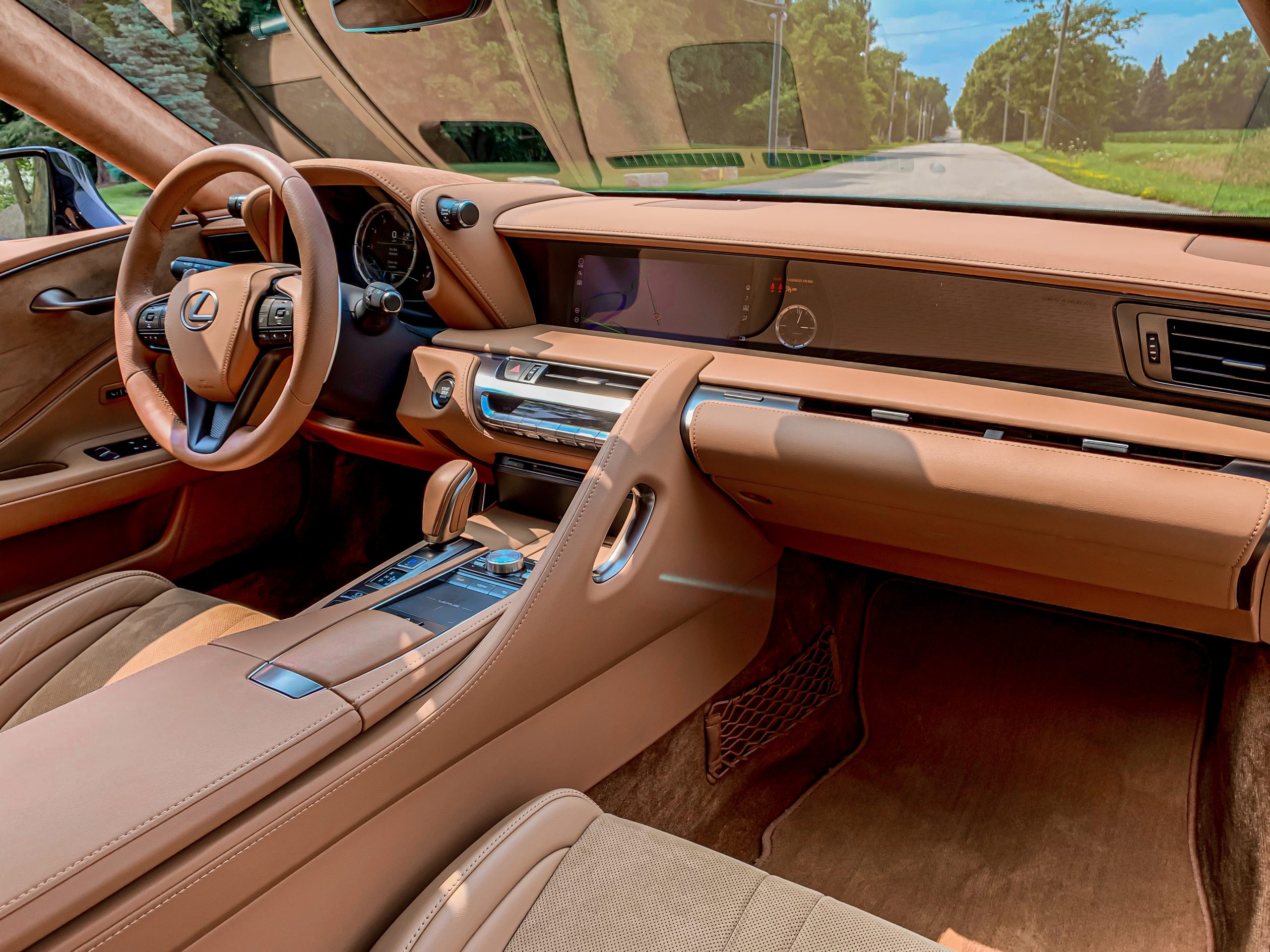 Imagine a 5.0 Mustang GT, with roughly $80,000 worth of extra value put into every aspect of the car that wasn’t the raw performance. That’s $80,000 to improve the interior, the ride and the driving feel in ways in which the driver will immediately recognize and appreciate.

In a lot of cars with price tags over $100,000, it can be very difficult to work out exactly where all that money goes. In an LC 500, you get a keen sense of where every dollar is at work.

I said about the entry-level Lexus IS that what it did well was remove friction. “Refinement” is Lexus’ signature move and that is what’s on full display in the LC 500 — refinement of the GT coupe experience. But what that really means is that it makes every journey feel special and stress free.

If it helps, think of the LC 500 less like a lavish Supra and more like a bargain Aston Martin. 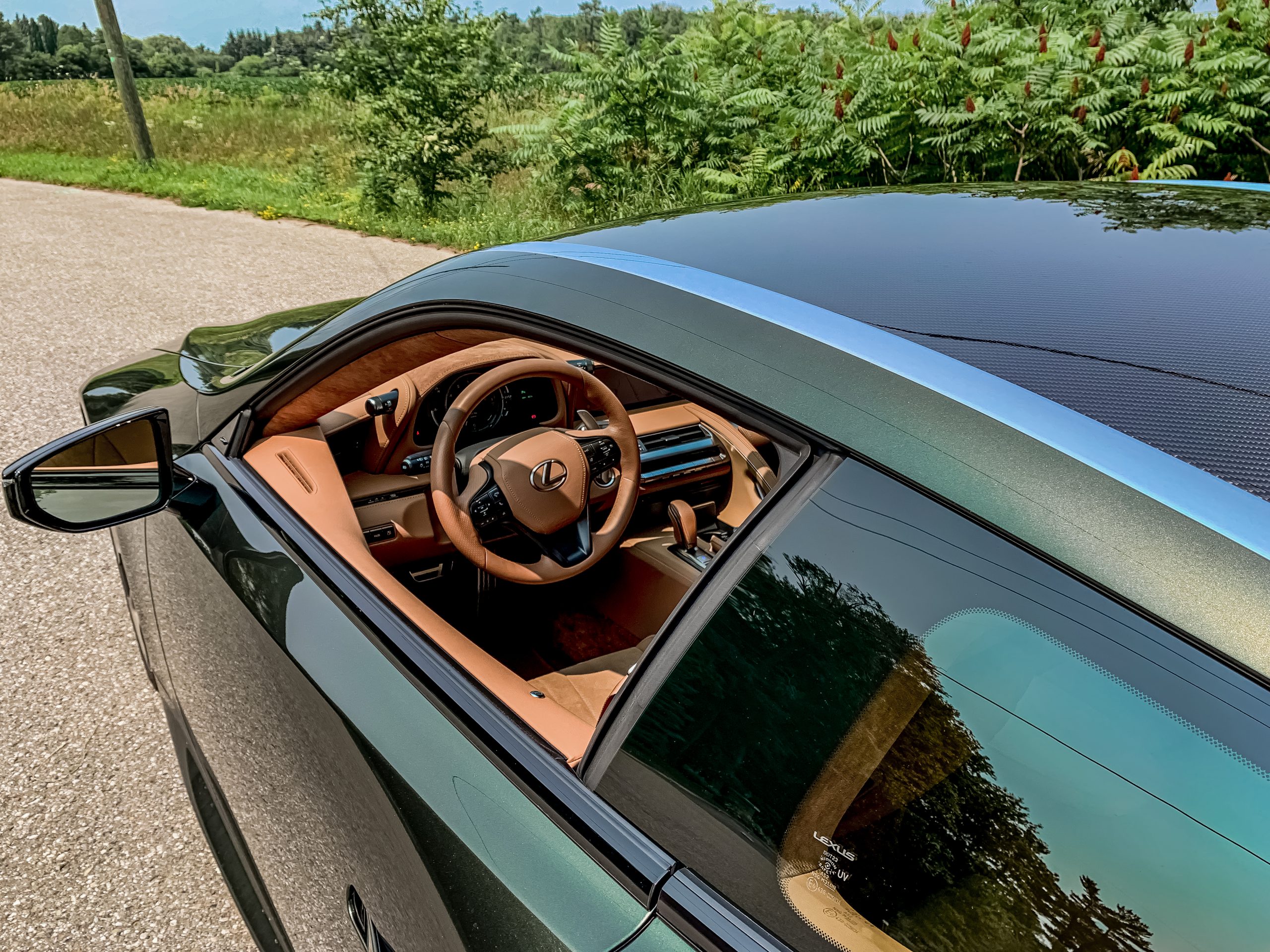 I suppose it is kind of hard to see out of the driver’s side blind spot. And the sound system is just okay. Also, I think Michelin Pilot Super Sport tires are all kinds of wrong for this car. They’re grippy, sure. But they’re also too noisy and ride too rough for a car which is, in every other way, unconcerned with raw performance at the expense of refinement. I never thought I would say this, but the tires actually communicate too much road feel for this car.

Also, on the subject of wheels, I don’t like the rims. Toyota seems to be one of the last holdouts to put chrome rims on their sports cars and it just looks horribly dated.

Knit picks aside, the LC 500 got under my skin in a way I didn’t think was possible. It felt like more than a car. It felt like a companion. And that is the absolute best (and most difficult) trick a car can pull off.

A Nissan GT-R, for example, when you start to drive it hard, communicates to you, “Don’t worry. I’ve got this.” It communicates confidence to your brain.

But an LC 500 says, “Don’t worry. I’ve got you.” And that communicates companionship to your heart.

Admittedly, it is possible I’ve developed an emotional relationship to the LC 500 because it came into my life for a very memorable occasion, albeit a very sad one.

I had my LC 500 tester the same week my partner’s father passed away after a long and arduous fight with brain cancer. Not only did my forest green LC 500 allow me to urgently transport my partner from downtown Toronto to her grieving family in Kitchener with equal parts haste and comfort (through those nasty thunderstorms), it provided everyone with a little bit of joy on an otherwise dark day. 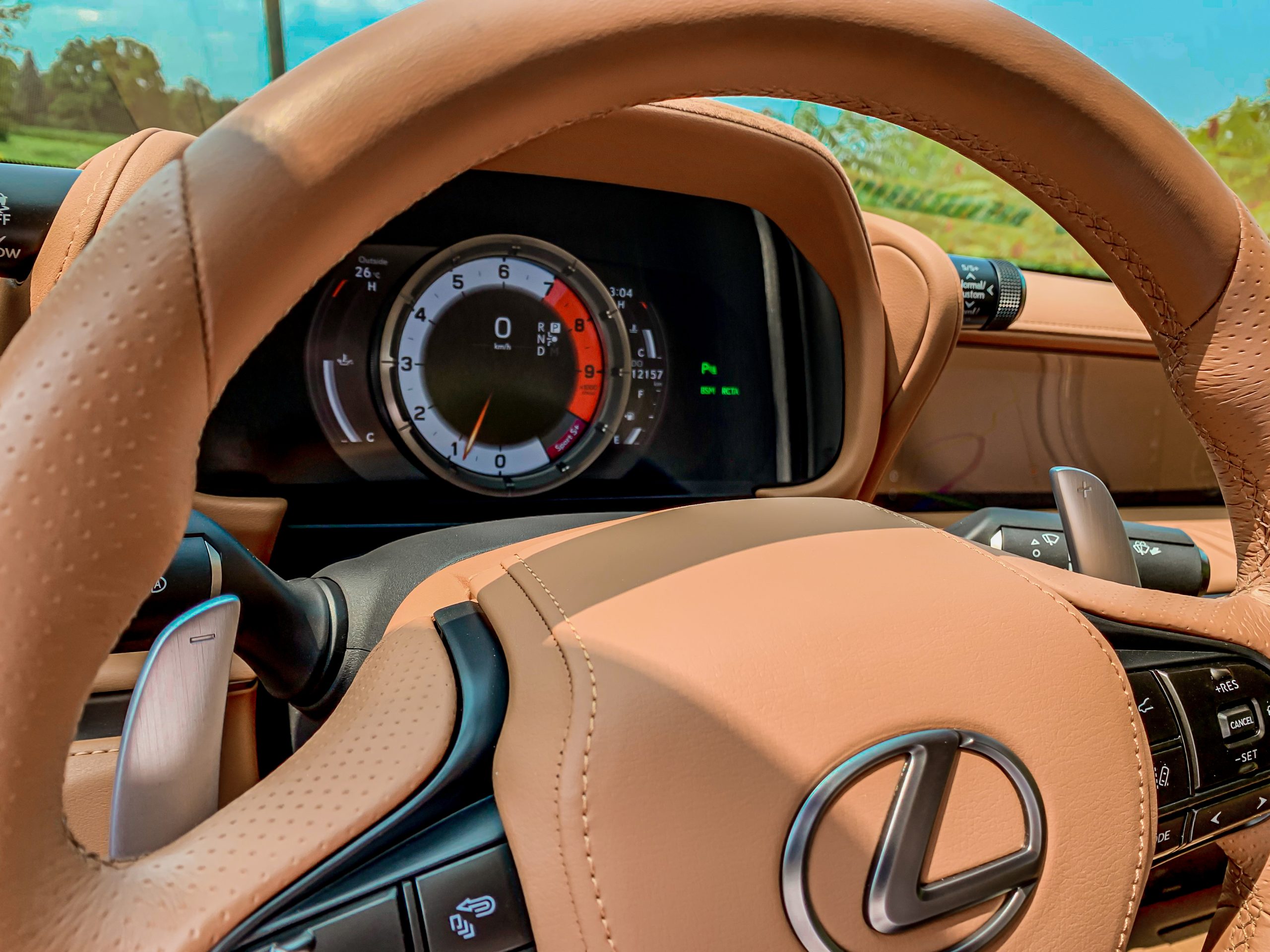 We even had a good laugh about how the LC 500’s interior was the same colour as my father-in-law’s beloved 1981 Camaro Z/28 — a car he had owned since new.

And so beyond being a spectacular engineering achievement and an essentially faultless car to drive, the LC 500 became a friend because it was present for such a significant day.

There are plenty of other cars which have made an impression on me because of a significant memory. A 2018 Mustang GT took me on a tour of Hawaii’s big island and earned me my first speeding ticket in the USA. A 2012 Nissan GT-R savaged me around a race track and gave me a new appreciation for speed. A 2019 Honda Civic Type R ushered me through back country roads on cool fall days and was the first press car I ever reviewed for a publication. I still wonder what became of my 2004 Mazda RX-8 — the first stick shift and JDM car I ever owned.

And like those machines, I’ll always remember that green LC 500 and the small bit of joy it provided on an otherwise grim, rainy July day.