The Unique Rides of Rock Legends

People either loved or hated John Lennon’s 1965 psychedelic Rolls-Royce Phantom V Touring limousine. According to one story, a woman yelled, “You swine! How dare you do that to a Rolls-Royce,” at the Beatle as he cruised along London’s Piccadilly.

Why the strong reaction? At the musician’s request, artist Stephen Weaver had painted the once refined vehicle into a nonconformist, four-wheeled, rolling representation of Summer of Love hip.

“That’s when the car started taking on a life of its own,” said Lorne Hammond, history curator at the Royal B.C. Museum in Victoria, and the current home of the legendary vehicle.

Lennon bought his distinctive car (before he even has a driver’s license) on the advice of his business manager, who warned the members of the band they needed to start spending money, said Hammond. 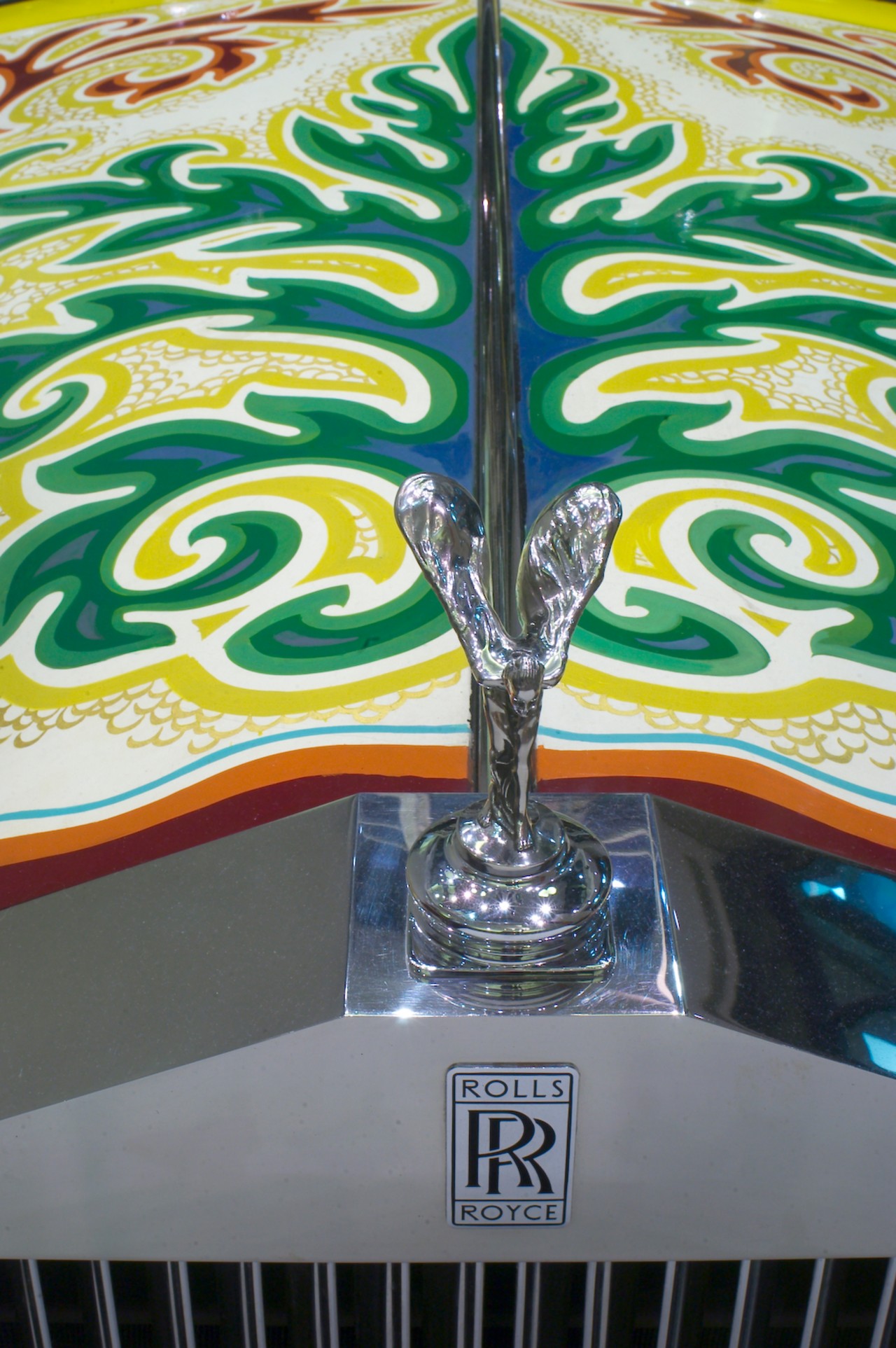 “The accountant pointed out that they had done very well, but they would be paying 90 per cent tax,” he said. “They were all ordered to go out and buy houses and cars on very short notice, because, otherwise, it all goes to the tax man.”

Lennon’s spending spree began with the cash purchase of the car, which was tricked out with all the usual accessories and elegant touches – a Valentine Black finish and walnut trim – you would expect from a Royce. Then, there were the unusual add-ons: a writing desk, a radio-telephone, a double bed, a Philips Auto-Mignon AG2101 “floating” record player and a Perdio portable television.

And, as a final touch, the Royce received a new paint job to coincided with the release of the Beatles’ “Sgt. Pepper’s Lonely Hearts Club Band” album in 1967. Inspired by the spiritual books that bandmate George Harrison was reading, Lennon paid Weaver to really make it a one-of-a-kind limo. Using cellulose-based house paint, the artist laid down a base coat—a shade the Daily Mail called “shrieking yellow”—and decorated the car with whimsical flower-power vines, colorful art nouveau swirls and Lennon’s astrological sign, Libra, on the roof.

Don’t make the mistake of thinking Lennon was alone in his enthusiasm for a unique ride. A number of musicians have left behind automobiles that were not only symbols of their success, but also works of art that reflected their antiestablishment rock ’n’ roll attitudes.

Unlike Lennon, Janis Joplin had a driver’s license when she paid $3,500 for her second-hand, 1964 Porsche 356 C Cabriolet in Dolphin Grey. The car really stood out after she shelled out another $500 to roadie Dave Richards to customize it with a kaleidoscopic mural called “History of the Universe.” 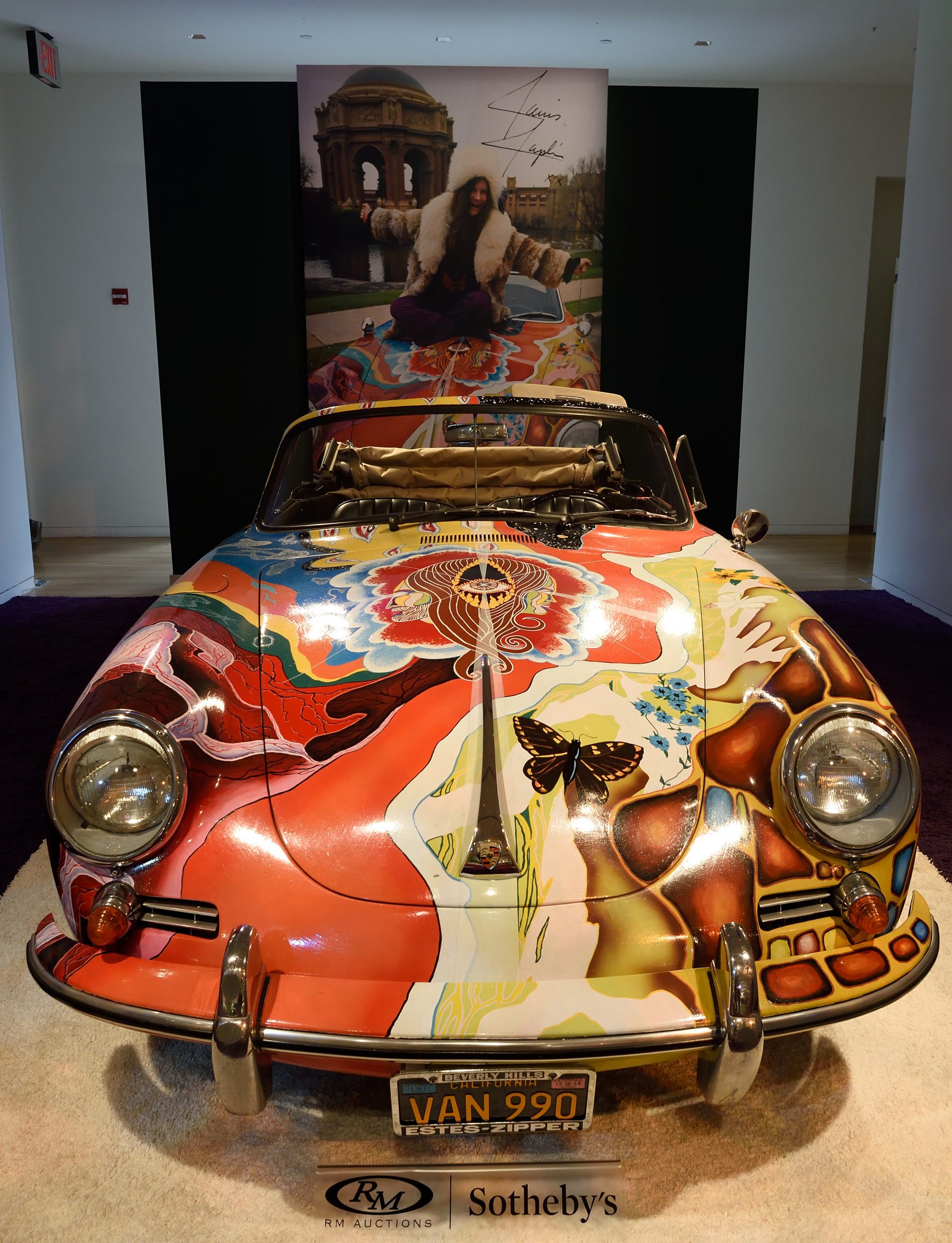 Bill King, Joplin’s former musical director, said he and the singer would often go to a billiards hall in the San Francisco area in the vehicle. “People would run to the windows when she pulled up” he said. “She’d park it in sight where everybody could see it. She wanted to see it, too, because it could easily get stolen.

“She didn’t let anybody touch it,” added King. “But she couldn’t drive it right. She liked to go out and play nine ball and then we’d ride around in her car, but she couldn’t figure out the clutch. You know how San Francisco is with the hills. She’d go up a hill and all of a sudden it would just cough and die and we’d all sort of jump over and try to put our foot on the brake at the same time so it didn’t roll backwards on us.”

Lennon also managed to keep his car on the road, despite the concerns of the police that its wild colours would distract other drivers. He once crammed nine people in the back to shuttle them to the Sgt. Pepper’s release party at manager Brian Epstein’s new country home and often gave lifts to his famous friends, inclduing members of The Rolling Stones and Bob Dylan.

Eventually the limo, which is now valued at nearly $7 million, made its way from England to New York’s Cooper-Hewitt Museum of Design before being parked at its current home at the Royal B.C. Museum.

Canadian businessman Jim Pattison paid a record-setting (at the time) $2.3 million for the car at auction, displaying the limo at his Ripley’s Believe It or Not! museums before donating it to the province of British Columbia in 1986.

“We have two things,” said museum curator Hammond. “We have a historic vehicle, covered in house paint, and we have a historic painting that happens to be on a vehicle instead of on a canvas.”